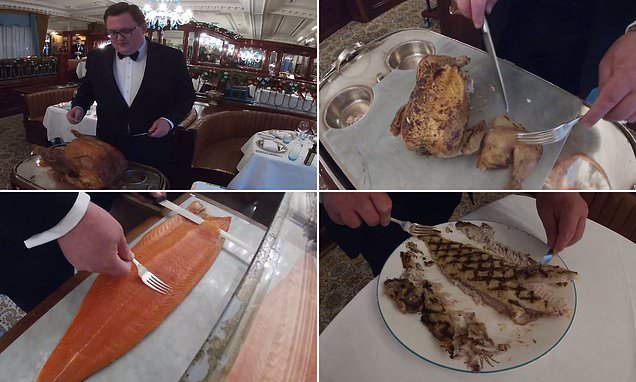 You’ve been carving your turkey (and chicken and fish) all wrong! Five-star hotel maitre d’ demonstrates how to slice those key Christmas meats like a pro

The carving of the turkey is a big Christmas moment – so feeling apprehensive at the thought of stepping up to the plate and doing the slicing is understandable.

But fear not, because here, in a series of exclusive videos, carving expert Paul Foxon reveals the secrets to presenting a plate of evenly cut slices, rather than a messy pile of mangled flesh.

He trained as a chef and is now Head Maitre d’ at five-star London hotel The Rubens At The Palace – so these videos show a master at work (literally, they were filmed at The Rubens’ English Grill restaurant). And he’s got you covered in case you’ve opted for Dover sole, salmon or a roast chicken, with separate masterclasses for carving those, too.

How to carve a turkey 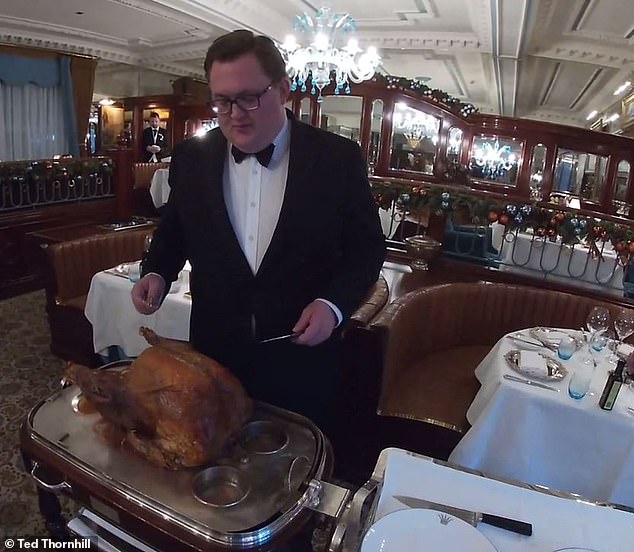 Paul Foxon, pictured, trained as a chef and is now Head Maitre d’ at five-star London hotel The Rubens At The Palace 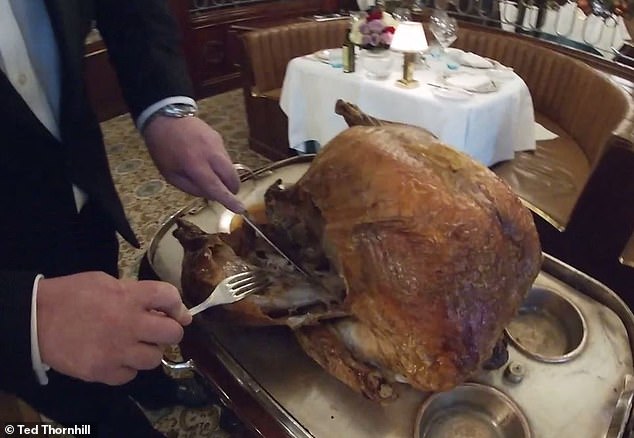 Paul explains that the most important thing when carving turkey is to take the legs off first by making an incision through the skin to reveal the joint. Then you push the leg open

‘When carving a turkey,’ says Paul, ‘the most important thing is to take the legs off first. Make an incision through the skin to reveal the joint and push the leg open. So very similar to what you’d do with a chicken to start with.’

The knife then goes in the joint and you push the leg away.

Then it’s time to remove the wishbone, which you do by cutting the skin to reveal it – it’s between the neck and the breast – and pulling it out. 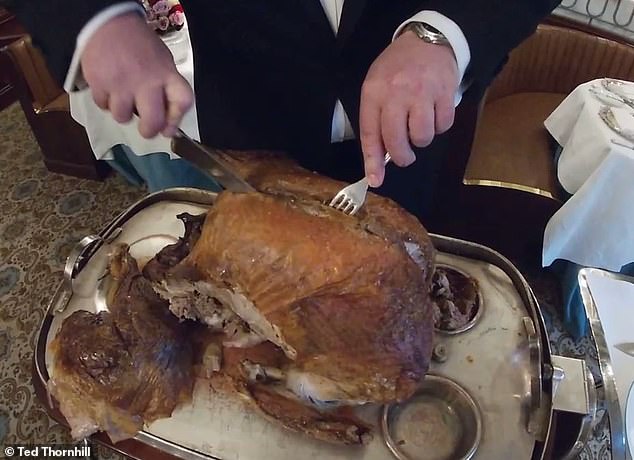 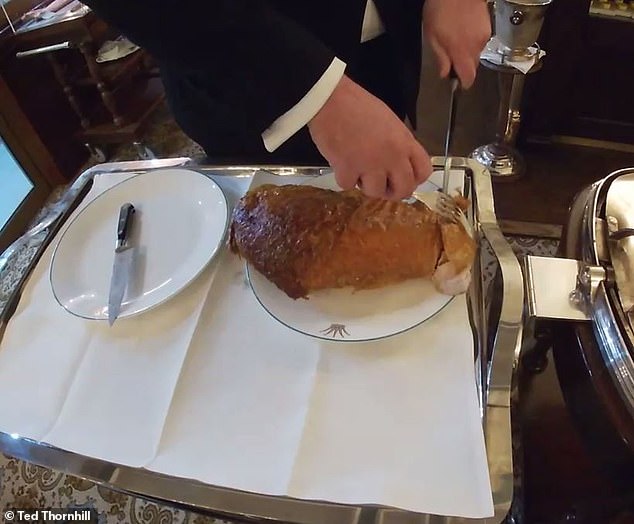 After this, as with a chicken, you find the centre breastplate and just insert the knife down the bird all the way along. Then, using a fork, or your fingers, push the breast away. ‘And run the knife along the rib cage bones to release the meat,’ says Paul.

Then you carve around the wing to give yourself the whole breast.

With the breast now separated, carve it, using slow steady strokes, into slices as desired. This method is far easier than trying to carve the breast while it’s still on the carcass – and gives everyone a nice bit of skin, adds Paul.

How to carve a roast chicken 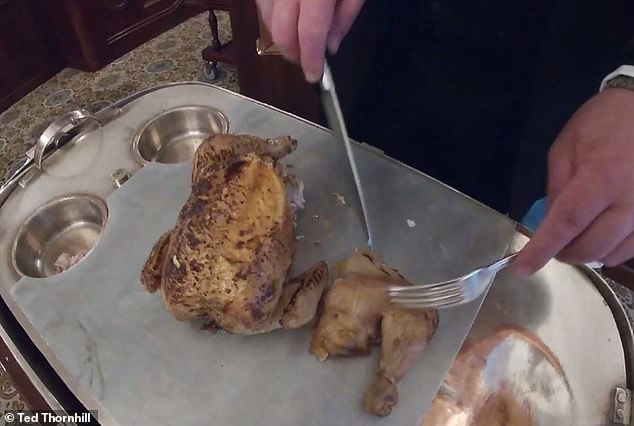 As with turkey, the key to carving chicken is to take the legs off first

‘Carving a chicken,’ says Paul, ‘is the same as carving any bird. A similar process all the way through. The most important thing first is you take the legs off.’

Make a small incision on the legs – but don’t go all the way down and don’t cut any meat – and pull them down with the fork. You’ll see a joint at the bottom. Break that and pull each one away.

‘When doing the breast,’ says Paul, ‘you run the knife down the centre of the bird to cut the skin, then insert the knife down inside the first breast until you reach the breastplate. Then you pull the meat away from the carcass and the meat just comes away.’

You can then cut the breast off from the wing – and cut the other wing away, too.

Then repeat the earlier process for the other part of the breast and pull the meat away from the carcass.

Once the breast pieces are off, slice them any thickness you want, holding them in place with the back of the fork, to avoid piercing them. ‘And it’s all about having a very sharp knife,’ adds Paul.

How to slice Dover sole 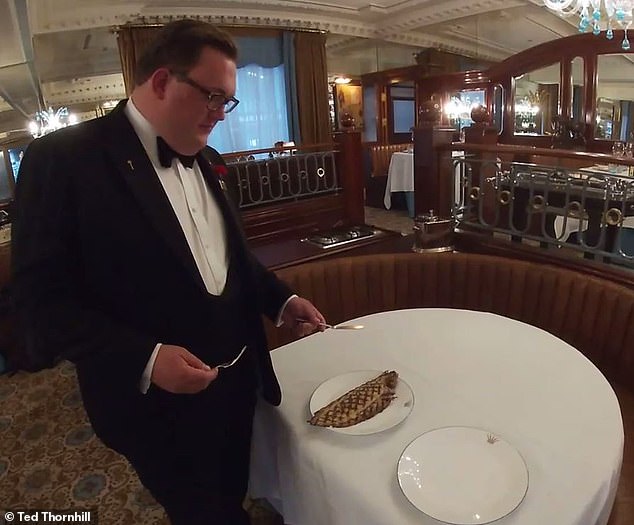 Paul at The Rubens At The Palace’s English Grill restaurant, giving his Dover sole slicing demonstration

You start by taking the head off, explains Paul. And you put that to one side. Then you turn the fish and cut off the wings, ‘which come off with pressure’.

He says: ‘The bottom side of the fish, where the guts are, which are obviously taken out by the chef, is where the bigger wings are.

‘Then you have just the centre bone and the flesh left.’

So then you put the knife in and run it along the bone, in between the bone and the flesh of the fish. All the way down to the tail. 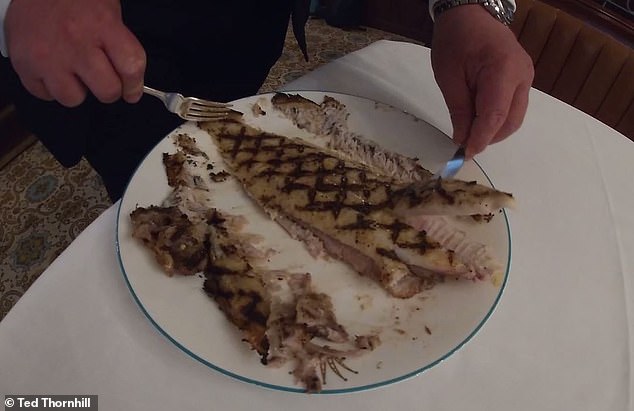 In the restaurant, Paul explains, the fillets with the beautiful grill marks are place on top of the underside fillets

Then you do the same for the other side, running the knife against the bone as before.

Then you lift the fillets up and place them on an empty plate.

Next it’s time for the centre bone to come off – just lift it away from the top by running the knife under it. Hold it in place at the other end with the fork.

Make sure you don’t get any of the meat stuck to the bone.

Sometimes some of the small bones are attached to the fillet, so just run the knife down either side of it to remove them.

That whole piece then just lifts up.

In the restaurant, Paul explains, the fillets with the beautiful grill marks are placed on top of the underside fillets.

How to slice salmon 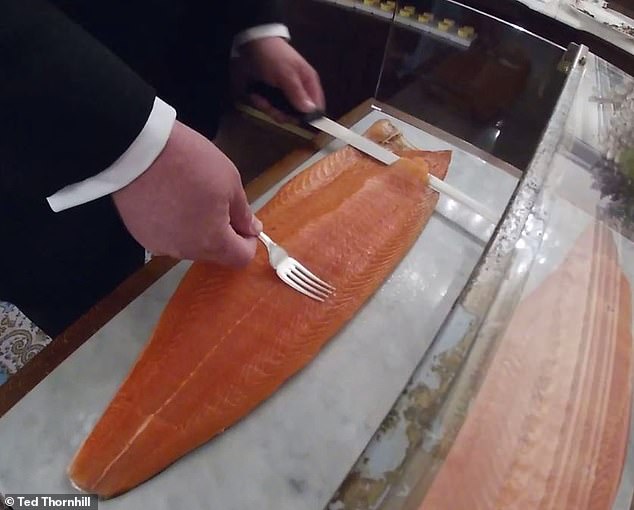 When slicing salmon, says Paul, make sure you have a very sharp bendy salmon knife with grooves, so the flesh doesn’t stick to it

First things first – the equipment needs to be suitable. Make sure you have a very sharp bendy salmon knife with grooves, so the flesh doesn’t stick to it.

‘You always start at the top of the fish where the head would be,’ says Paul. ‘Make a small incision, and then you let the knife do all the work.’

Work the blade back and forth down the length of the fish. ‘It should be nice and thin,’ says Paul, ‘so you can see the blade through the salmon.’

Then you lift it up and it’s dressed on the plate.