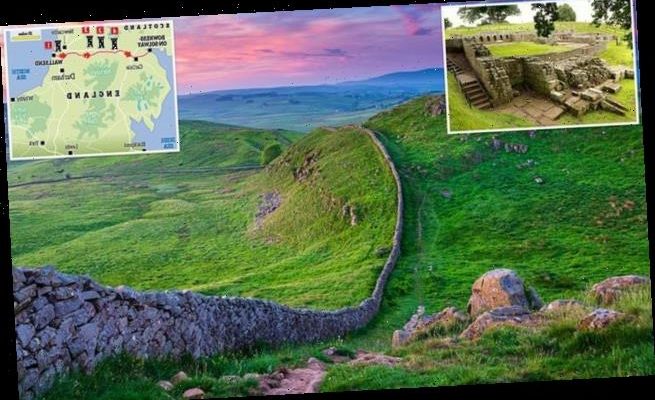 Call of the wall: Hadrian left us with one of the greatest hikes in Britain – perfect to blow away your cabin fever once restrictions are lifted

You may well find yourself in kinship with W. H. Auden’s soldier from his poem Roman Wall Blues at some point when walking Hadrian’s Wall. ‘Over the heather the wet wind blows/I’ve lice in my tunic and a cold in my nose/The rain comes pattering out of the sky/I’m a Wall soldier, I don’t know why.’

Our such moment (minus tunic lice) came as a gale struck between East Wallhouses and the village of Once Brewed.

Yet most of the way along Hadrian’s Wall — which runs for 73 miles from Bowness-on-Solway in the west to Wallsend in the east — the going was good, the landscape walker-friendly (flat), the history intoxicating. 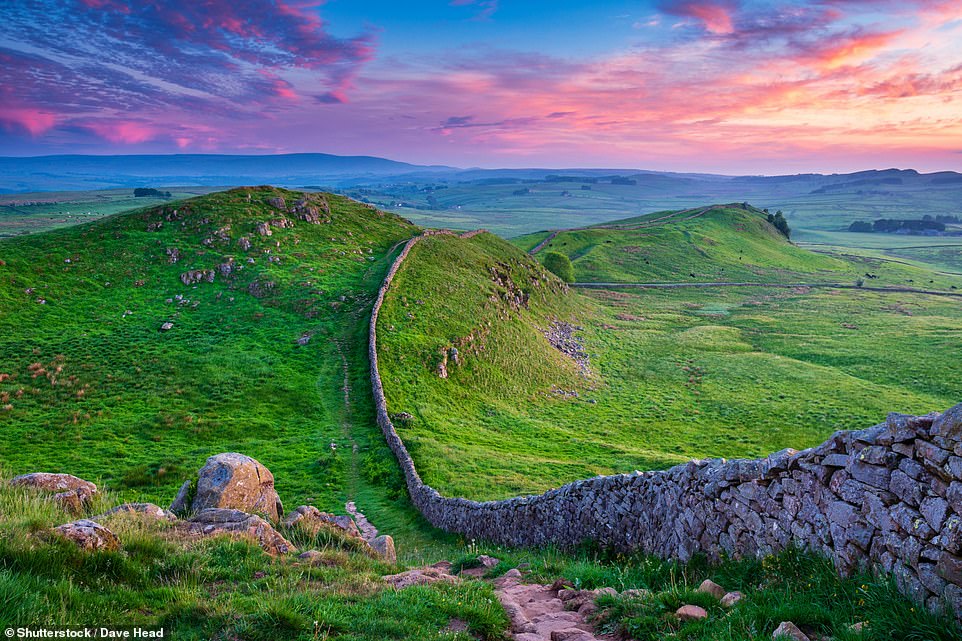 Hadrian’s Wall, which was designed to ‘keep out the barbarians’ from the north. Building it involved 3.7million tonnes of stone. Pictured is the part of the wall at Caw Gap

Emperor Hadrian, who ruled for 21 years, did not mess about. His plan to ‘keep out the barbarians’ from the north in AD122 involved 3.7 million tonnes of stone. The project, prompted by a rebellion, took six years.

Today, an amble provides a rewarding glimpse into ‘Britannia’, though you don’t have to do it all in one go, of course. Dipping into a section offers a wonderful taste of ancient days gone by.

Accommodation can book up well in advance. So get that done early.

Then choose how quickly you want to do it — nine days is usual — and which direction. In the spirit of legionaries on a first patrol, we (my brother Ed and I) opt for Wallsend to Bowness. With limited time off, we have five days.

FORTS, HISTORY AND THE RIVER TYNE 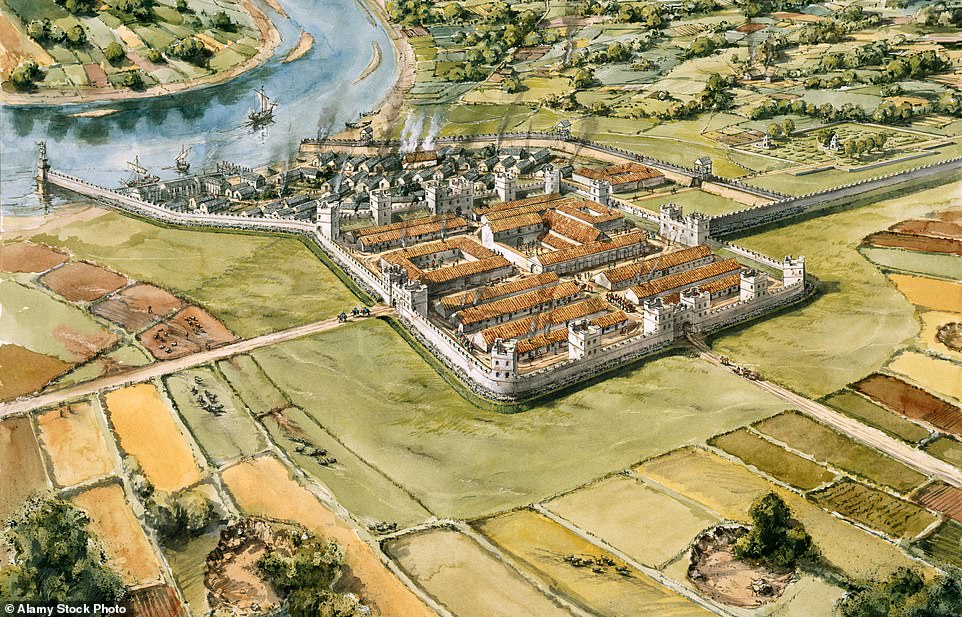 A drawing of what Segedunum Roman Fort in Wallsend, where Tom’s hike started, would have looked like in its heyday 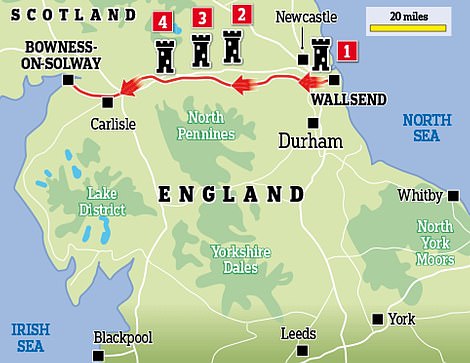 Although Hadrian’s Wall is 73 miles, the distance of the meandering official path is 84 miles. We join at Wallsend at Segedunum Roman Fort, the first of 16 forts.

The facts, figures and history are laid out clearly at Segedunum, where a tower allows you to view the outlines of the old foundations.

The wall was once 12ft high here, but most of the stonework was purloined after the Romans’ 5th-century departure from Britannia, we learn, much of it for Tynemouth Priory.

Some 15,000 soldiers built the wall, and centurions’ names are still scratched into what little remains.

Well briefed, we enter the gift shop and buy ‘I walked the Wall’ T-shirts. Hard to resist (if pre-empting matters somewhat). And so we begin.

From Wallsend to Newcastle is five miles along an isolated Tyneside path (just the odd burnt-out joyrider’s moped), with the city’s bridges looming ahead.

It’s a beautiful walk and we celebrate our first-day efforts with burgers and pints at The Bridge Hotel overlooking the Tyne. A clairvoyant is holding an event in a sideroom and we are tempted to ask whether we will make it to Bowness (but decide to get an early night).

Where to stay: Doubles at the Hilton Newcastle from £50 (hilton.com).

WAGONWAYS, THE WALL AND AN OLD INN 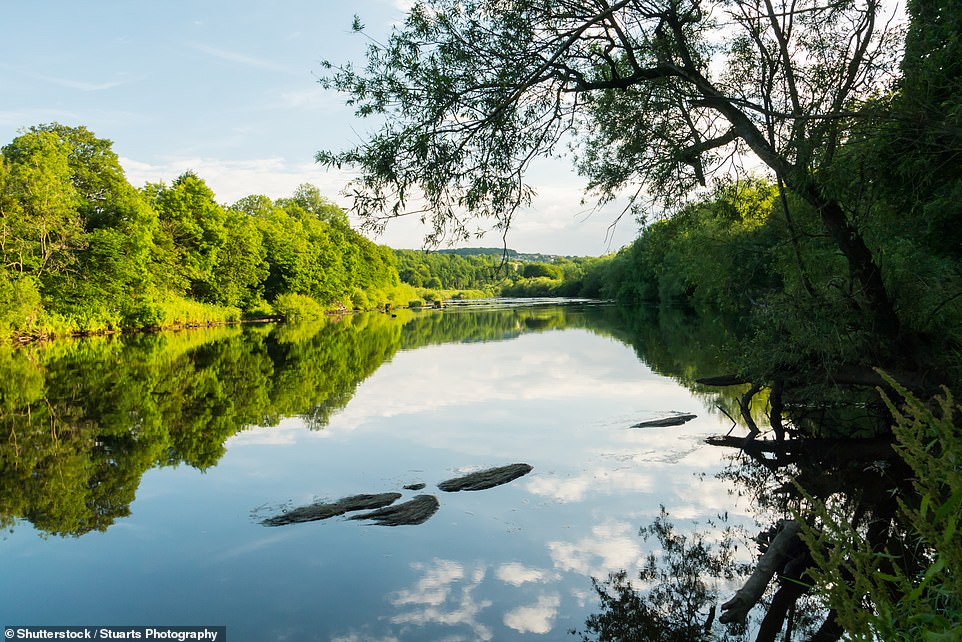 Wylam, pictured, the home village of great railwayman George Stephenson, is one of the locations on the route

From our hotel it is a trudge to the river, and it takes a while to get out of Newcastle.

After a housing estate, we pass a concrete-making plant before moving along a pretty stretch of the Tyne.

We cut inland, traverse a golf course and follow a tree-shrouded lane.

This takes us to George Stephenson’s home village of Wylam, where the great railwayman-to-be witnessed as a boy how engineers ran a horse-drawn wagonway on wooden rails to help transport colliery coal (giving him ideas).

We follow this route, before coming to the sleepy village of Heddon-on-the-Wall and, lo and behold, our first bit of actual Hadrian’s Wall.

Fantastic! Until Heddon, most ‘wall’ has long ago been whisked away. But in a fenced-off area where the Vindobala fort once stood, the stones remain.

From here we follow a seemingly never-ending country road, cut by a lake, before arriving at East Wallhouses, another village, wondering after the long plod: ‘Is this really worth it?’

But that’s just the way it is on a Hadrian’s Wall walk: there are highs and lows.

And a high is awaiting us. The delightful Robin Hood Inn has flickering fireplaces, good food and fine wines.

Perfect after our centurion-like march.

Where to stay: B&B doubles at the Robin Hood Inn from £100 (robinhoodinnhadrianswall.com). 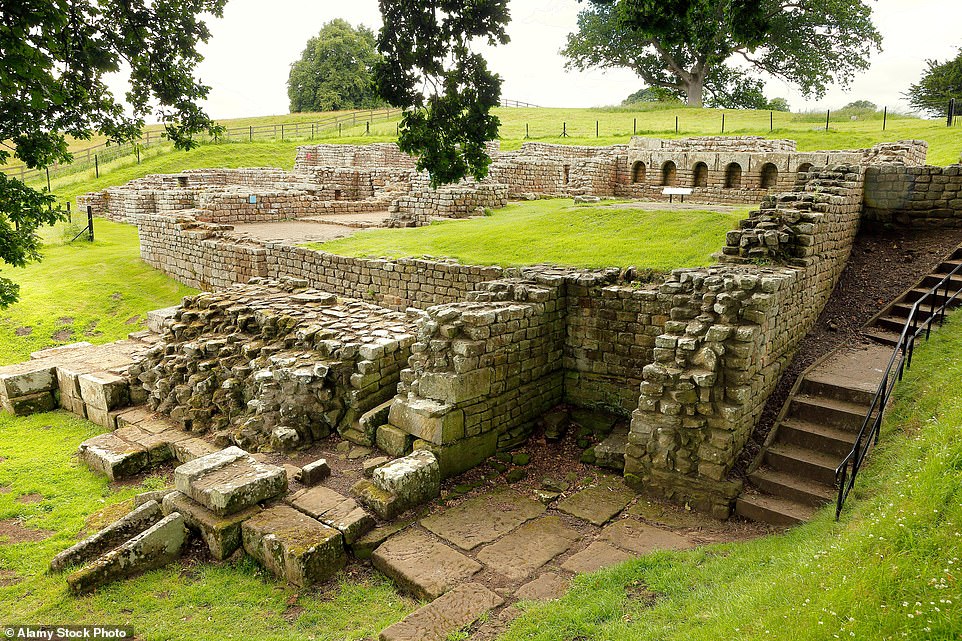 Chesters Roman Fort and Museum in Hexham, where Tom learned about Hadrian’s sheer determination to build the wall 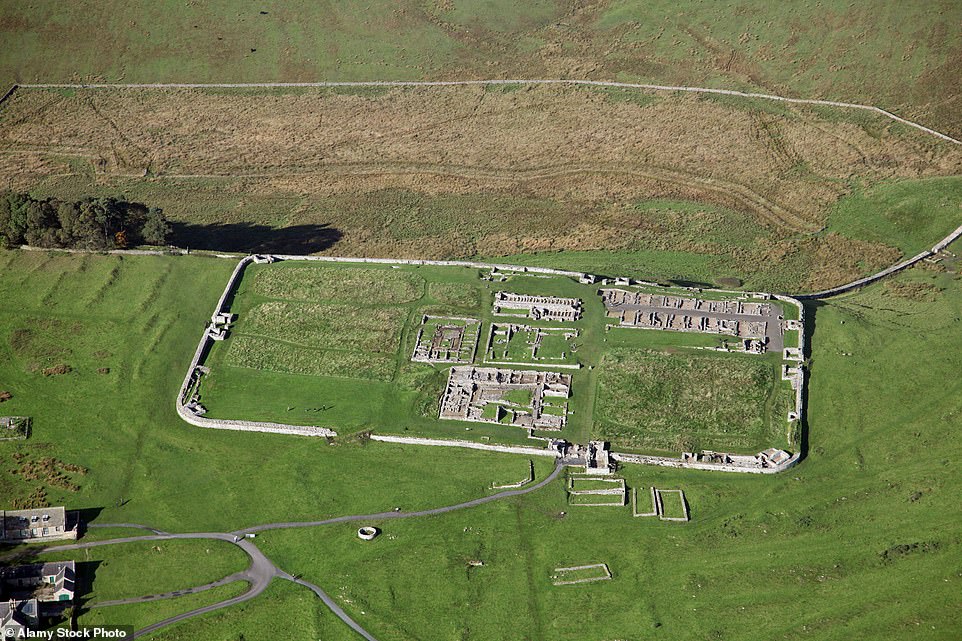 Housesteads Roman Fort – once home to 1,000 infantry – is near Hexham and is one of 16 forts on the route

Next day begins with a spring in our step, and an encounter with Pete and Chris. They are brothers from Nottingham on a ‘bonding’ hike (like us), going in the same direction. We compare maps and they part with: ‘See you at the bar.’

None of us is certain precisely which bar. But we feel this may be likely.

Across rolling hillsides we tramp, stopping to learn more about Hadrian’s sheer determination to build the wall at Chesters Roman Fort and Museum.

Not long afterwards, however, it’s our own grit that’s required. A gale sweeps in and we are swiftly soaked (despite our ‘waterproofs’). ‘It is too windy to think,’ says Ed. He’s right. It’s shocking, and we have hit a definite ‘low’ on the comfort front.

Yet the wall in these parts is marvellous: turrets, defensive ditches, milestones and Housesteads Roman Fort — once home to 1,000 infantry. We arrive at another lovely pub, the Twice Brewed Inn, in the oddly-named village of Once Brewed. Pubs are proving to be our saviour.

No sign of Pete and Chris. But we do drink fine foamy pints of Ale Caesar. Hail Hadrian, more like!

Where to stay: B&B doubles at Twice Brewed Inn from £110 (twicebrewedinn.co.uk).

GARRISONS, DITCHES AND A TEA ROOM 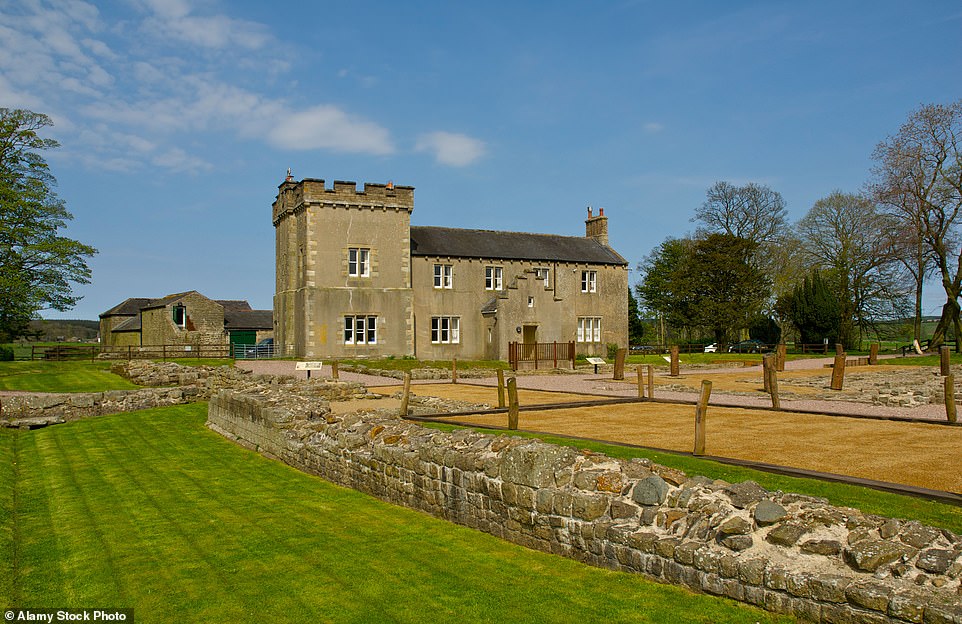 Birdoswald Roman Fort, where Tom and his brother Ed enjoyed the history and a fine stretch of intact wall

The great thing is that if you hit the sack early feeling exhausted, you’re raring to go the next day.

We take to the path at dawn and the countryside opens up: remote, rugged, awe-inspiring. An orange tinge lights the morning sky. Our spirits are again soaring.

A dog-walker on the trail stops to chat and tells us all about a couple who once walked four miles along the wall in the wrong direction by mistake during a storm. He has a good chuckle about this. Then a woman passes us running from Newcastle to Carlisle in two days. And before we get to ask anything else she’s off: scooting along the wall and old defensive ditches.

Not far afterwards is Birdoswald Roman Fort, where we enjoy the history and a fine stretch of intact wall.

Which brings us to another sleepy village: Walton. Here we bump into Pete and Chris again at a tearoom. They have ten more miles to go today and look dog-tired, yet exhilarated: Hadrian’s Wall can do that to you. We stay at a hostel.

Where to stay: B&B rooms at Florries On The Wall hostel from £60 (florriesonthewall.co.uk).

A LONG MARCH, CARLISLE AND THE SEA 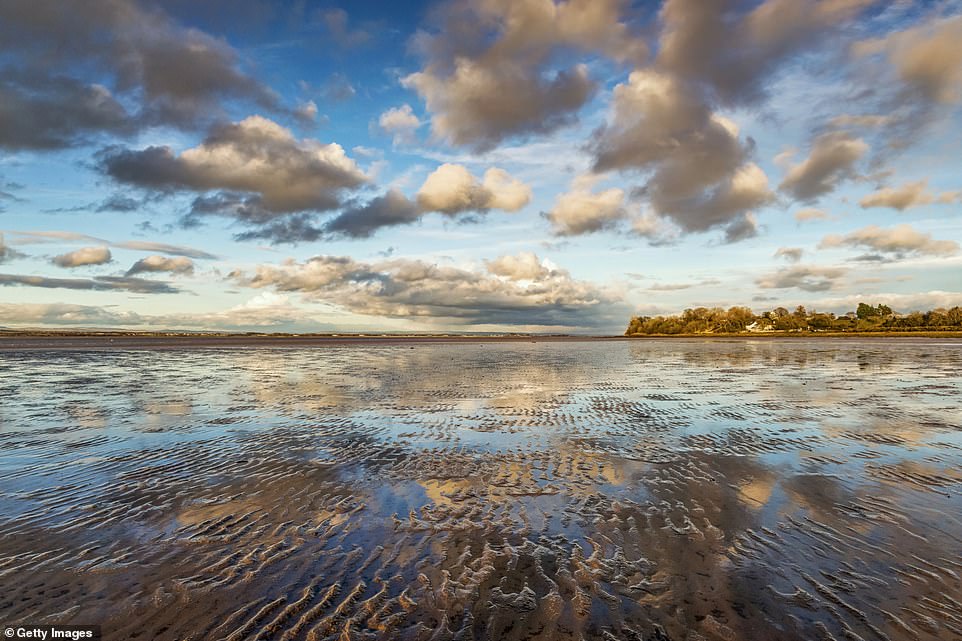 OK, so this is it: the Final Push. Bowness-on-Solway is 24 miles away, and we start early, setting off across flat farmland into Cumbria — no sign of the wall any more (the stones taken for other purposes).

It is a pleasure to follow the willow-lined River Eden before entering Carlisle.

Then we stride purposefully beyond Grinsdale, Beaumont, Burgh by Sands, Drumburgh and Glasson to our destination. This is a very long way.

But at Bowness, the greatest ‘high’ of all awaits as the sea unveils in silvery glory.

We’ve made it! What to do? Go to a pub, of course. At the King’s Arms we raise a toast to Hadrian. Like Auden’s soldier — without too many blues — we’ve made it across the emperor’s famous old wall. Hurrah!

Where to stay: B&B doubles at Shore Gate House from £50 (shoregatehouse.co.uk).