The tunnel to the subterranean bunker that played a pivotal role in the liberation of Paris is long and narrow, each step down deceptively steep.

It takes 100 of those steps to reach the former military command post where, for six days, members of the French Resistance helped orchestrate the city’s release from the Nazi occupation in 1944.

For decades after the liberation, the bunker, in the southern end of the city, languished in neglect, abandoned and visited only by urban sewer explorers or tagged and occupied by squatters.

But on Aug. 25, when the French capital marks the 75th anniversary of its liberation during World War II, the newly restored underground shelter will be inaugurated as part of the redesigned and relocated Musée de la Libération de Paris-Musée du Général Leclerc-Musée Jean Moulin — an unusually long name aimed at honoring key heroes of the French Resistance.

Above and below ground, the museum walks visitors through one of the darkest and most joyous periods of modern Parisian history, from the calamitous moment France fell and German forces captured Paris in 1940, to the moment the city was liberated four years later by the Resistance and Allied forces.

The Musée de la Libération had previously operated in near obscurity above the Montparnasse train station and was little known among Parisians, much less tourists. Visitor numbers were dismal.

Now a few steps from the catacombs, the hope is that the bunker will help the museum become a new tourist attraction in the 14th arrondissement — one that preserves the memory of an important moment in Paris history. 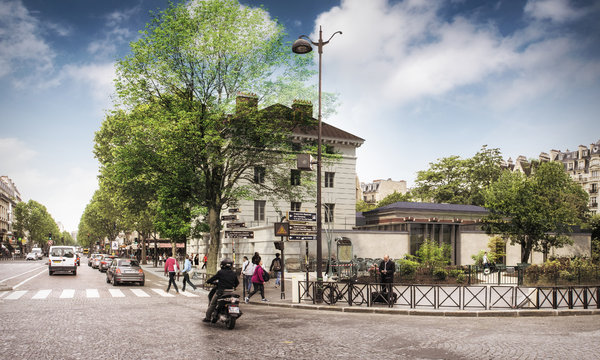 During their tour, visitors learn that the bunker was originally opened in 1938 as an air raid shelter, and that its existence was known to the German army. What the Germans didn’t know, however, was that the Resistance, led in Paris by Col. Henri-Rol Tanguy, would take it over in the week leading up to the liberation, and use it as a command post and communications hub. Equipped with its own telephone exchange, the shelter gave Colonel Rol-Tanguy and his staff access to 250 telephones around Paris, including at police headquarters and in air raid shelters, allowing them to bypass official communication lines that were likely to be tapped. It also served as an effective hide-out, as messengers gained access via the nearby railway line, either to deliver intelligence or receive new orders from Colonel Rol-Tanguy.

A continuous soundtrack overhead brings the command post to life, playing recordings of sounds often heard during the war: a haunting wail of the air raid siren; shrill, strident rings of old-fashioned telephones; calls from members of the Resistance; the click-clack sound of running footsteps that conveys a hair-raising sense of urgency.

The restored “disinfection room” near the entrance where victims would have been treated in the event of a gas attack; vintage gas masks; and the stationary bike used to generate electricity in the event of a power shortage all serve as stark reminders of the realities of war. The bunker also recreates the room that housed the telephone switchboard and the office where Colonel Rol-Tanguy would read reports and dictate messages to his wife and secretary, Cécile Rol-Tanguy, also a member of the Resistance.

Above ground, more than 300 artifacts are on display, including new additions, such as pistols used by soldiers in the 2nd French Armored Division led by Philippe Leclerc de Hauteclocque (better known as Général Leclerc), and a red, white and blue dress bearing images of the Eiffel Tower and the Arc de Triomphe. The Parisian wife and mother Marguerite Sabaut wore the dress for the victory parade down the Champs-Élysées on Aug. 26, 1944.

The redesigned museum also pays tribute to Général Leclerc and Jean Moulin, who were key architects of the French Resistance. Under Gen. Charles de Gaulle, Moulin would unify the Resistance across France, coordinating efforts with local factions across the country. Leclerc would lead the liberation of Paris with his 2nd French Armored Division and the help of Allied forces, dealing the final blow to the Germans.

Visitors become progressively better acquainted with the two men, and the decisions they made at key moments during the war, from additional artifacts, like Général Leclerc’s cane and French shell jacket and the final handwritten letter Moulin’s mother and sister would receive before his death in 1943.

The Paris mayor, Anne Hidalgo, commissioned the relocation of the museum above the underground bunker in 2015, after meeting Mrs. Rol-Tanguy, now 100 years old.

At the end of the war, then a young 25-year-old mother of two, Mrs. Rol-Tanguy worked around the clock for six straight days and nights alongside half a dozen young women in the bunker, while Colonel Rol-Tanguy and his staff came and went, meeting with fellow Resistance fighters scattered throughout Paris.

For her son Jean Rol-Tanguy, 76, the restoration of the command post will bring to life his favorite war story heard growing up: how every day at 10 a.m. between 1940 and 1944, a German soldier would call the bunker and ask if there was anything to report; and how during the week of the liberation, the female workers at the switchboard would pretend that all was status quo.

“My parents never really talked openly about the war,” he said. “It was only when they met with old comrades from the Resistance that they would talk about it in front of us. This anecdote always made them laugh.”

Admission is free, but visits to the bunker must be booked in advance. Reservations can be made online at http://www.museesleclercmoulin.paris.fr/.