Late one night, in the early part of each November, there occurs an annual phantom hour. It creeps into the deserted region from 1 to 2 in the morning, and then vanishes, leaving everything changed. From this moment, 50 degrees is warm, not cold. Sunsets are confined to the realm of memory. Conclaves of blood-red cardinals congregate on decorative hand towels and doormats, even in trees. The American holiday season (which ends firmly on Jan. 2, but can be safely assumed to be revving up or underway on all other dates) escalates to Defcon 1, at which level it will remain for several dazzling weeks.

This period, complacently styled “the holidays,” is for spending time with loved ones; for observing aloud, sarcastically or to music, that it is currently the most wonderful time of the year; for reflecting on time’s terrifying, irreversible flight. It is the time when time is most precious, sentimentally, and because of a deficit of sufficient hours to barrel through end-of-year tasks. All the more frustrating, then, that we spend so much of it in helpless waiting. 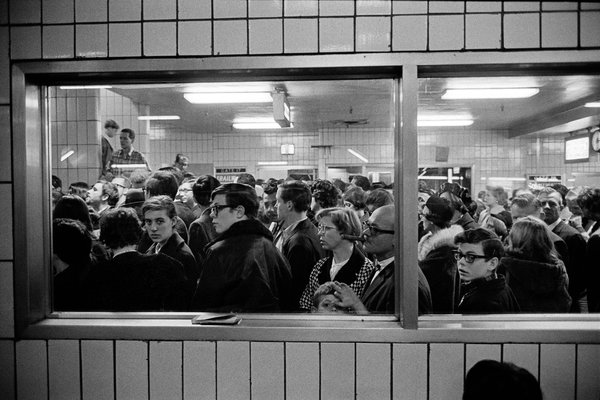 We wait for trains and planes and opportunities to merge; for gates to be revealed and for ignominious Boarding Group 2 to be summoned. We stand by for an audience with a customer service rep, to plead a futile case, satisfying a human need for misfortune to be at least acknowledged, if not refunded. We bide time as ice is defrosted from windshields, wings and turkeys; and as cashiers ring up a 9 a.m. hot dog or an 11 p.m. doughnut (noshes to send sugary life force coursing through the weary, not actually counted toward daily food intake). We yearn for the line to move, for some in the line to give up and for the purpose of the line to reveal itself. And most urgently, we wait for the familiar stretch of sidewalk to slip into view as the final corner is rounded — for the holidays, nearly over, to begin.

At all places where strangers are confined temporarily in too-close proximity, we stand, or sit, or rock in place. Our frantic clockward glances gradually harden into dead-eyed stares at nothing, until we resemble the subjects of Michelangelo’s vision of “The Last Judgment.” The fateful figures are depicted in the eternal instant before their destiny is revealed, but after the window for them to shape it has closed — the frustrations of waiting, continuing even after death, even in the nude. (“Absolutely Ridiculous wait times,” is one TripAdvisor user’s review of the Sistine Chapel.) In the lower-right corner of the fresco, damned souls are dragged bodily into hell, which is not ideal, and yet we cannot help think — four hours delayed at Kansas City International Airport, braving two separate security lines in an attempt to kill time at a Pizza Hut Express (that is closed) — isn’t there something to be said for having at least arrived at their destination? This is the wondrous magic of the holidays.

As we digitize our photo library — some six million images dating back more than 100 years — we’re surfacing the pictures in a new archival storytelling project called Past Tense.