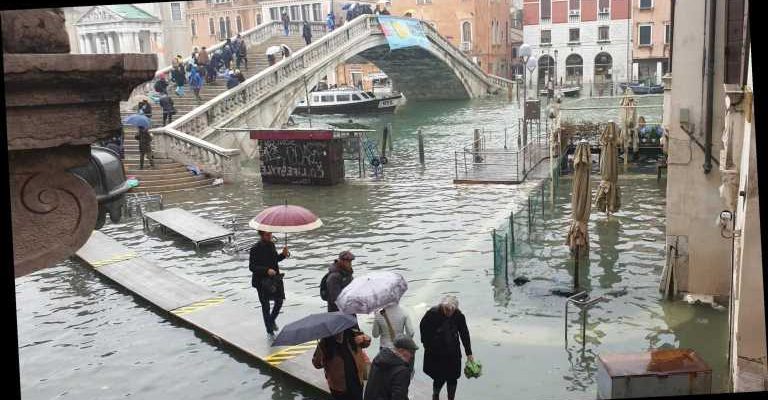 In the aftermath of Venice’s historic flooding, tourists are working on figuring out how to salvage their trips to one of Italy’s most popular vacation destinations.

The city on Tuesday saw its second-highest ever recorded flood levels – just over six feet above sea level – on Tuesday. Italian Prime Minister Giuseppe Conte said the Italian government plans to declare a state of emergency to help Venice recover.

Meanwhile, those visiting Italy are working out how to experience the city despite high water levels, doing their best to see all the major sights by braving the elements with umbrellas and wading through Venice in knee-high waterproof booties.

Carol Rourke, 60 from South Carolina, is in the middle of avacation with her husband and 39 other U.S., Canadian and Australian tourists through the Collette travel company. The group arrived in Venice Tuesday night just as water levels began to rise.

Carol Rourke and her tour group continued their tour of Venice through record-breaking floods. (Photo: Courtesy of Carol Rourke)

The tour manager had given the group a heads up that tides were supposed to rise, but they were not expecting the extremely high waters they encountered.

The group walked to dinner Tuesday night at a restaurant a few doors down from their hotel. By the time they were heading back, flood levels were already so high they had to use elevated walkways to keep from wading through water. Back at the hotel, Rourke said the group stood in the lobby and watched the water rise.

“I’m not sure any of us were completely prepared for what actually occurred,” Rourke told to USA TODAY via email. “I remember when we walked towards the exit of the restaurant we thought we would still be on dry ground, and when I saw the level of the water already, I turned around to look at those who were still in the restaurant with a gasp, a laugh and an ‘oh my God.’ We were totally surprised that the water had risen so quickly.”

Rourke said Wednesday morning brought flooding into the first floor of the hotel, but she and her husband were able to purchase booties to cover their shoes – which the tour company offered to pay for – and were still able to spend the day walking around as planned.

Not everything on their trip wish-list was doable; power was out at Doge’s Palace, so Rourke and her husband weren’t able to head inside. Some members of the group pre-paid for a gondola ride, for which Collette offered refunds. Elevators were out of order and raised walkways were “a little narrow and precarious” at the group’s hotel, making it difficult for some travelers with less mobility to get out to sight-see.

Still, Rourke is doing her best to make the most out of the trip. She described leaving Venice on Thursday morning in “beautiful sunshine,” even if flooding is still prominent. She said she’s impressed with the way Venetians have taken the situation “in stride” and are working hard to restore the city.

“We were amazed at the resiliency of the people and how hard they worked to get their businesses open on Wednesday,” she said. “It affected our visit for certain, but in no way ruined it in my opinion. Made it quite unique… I guess shock, surprise, awe and fun would be the best ways to describe my experience.”