The boy, as well as other children, slept in the meeting room. Staffers had also reportedly supplied them with cardboard boxes for entertainment.
(Supplied/Katie Meredith)

Virgin Australia is being scolded by the angry mom of a 9-year-old boy who was forced to sleep in an airport lounge after his flight was diverted.

Katie Meredith had sent her son John unaccompanied on a flight from Brisbane to Sydney to visit his grandparents, but the flight was diverted to Melbourne due to bad weather.

Virgin Australia staffers attempted to find rooms for the passengers at nearby hotels before ultimately setting the boy up in the meeting room of an airport lounge with two other children, News.com.au reported.

According to the outlet, the staff had difficulty finding vacant hotel rooms due to an ongoing Grand Prix in Melbourne. 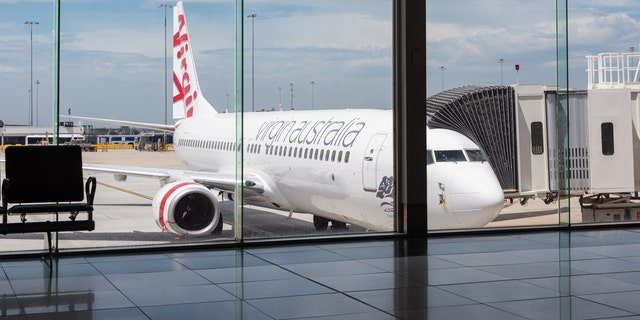 Virgin Australia later apologized for "any breakdown in communication" between the airline and John’s mother.
(iStock)

Meredith added that she was only alerted of the flight’s unscheduled stop after checking on a flight-tracking app, and seeing the plane was diverted to Melbourne. Her parents, meanwhile, were waiting at the Sydney airport to meet John.

“I got in touch with them and told them, and they went to the desk and got it confirmed,” Meredith told News.com.au.

She claims the airline also told her parents that the carrier would call with John’s updated flight details, which the airline provided at 2:30 a.m.

Meredith, however, wasn’t informed that her son would be placed in an airport lounge until his flight departed at 10 a.m.

“It isn’t so much about where he stayed, it’s about not knowing where your child is 100 percent of the time,” Meredith said.

“He was happy, he’s a pretty happy-go-lucky kid, but he just had heart surgery last month and I would never have allowed him to sleep on the floor of an airport,” she added.

Now, Meredith says she wants Virgin Australia to change its policies regarding unaccompanied minors so this kind of thing “doesn’t happen again” — specifically, she wants the airline to call both parties in the departure and arrival cities, as well as a parent or guardian, and to provide guardians with an emergency hotline telephone number.

Virgin has since apologized for the incident, though the carrier was not immediately available to confirm to Fox News whether it would implement changes to is policies regarding unaccompanied minors.

“In times of weather disruption, we do our best to accommodate guests onto other flights or provide accommodation when their flights have been diverted,” said a Virgin spokesman in a statement to News.com.au.

“We take the utmost care when transporting unaccompanied minors and aim to ensure their nominated guardians are aware of any developments as they arise. In this instance, our ground crew supervised the child and made him as comfortable as possible in a room in our Melbourne Airport Lounge ahead of his flight the following morning.

“We apologize for any breakdown in communication between our team and the child’s guardian during the course of the evening.”