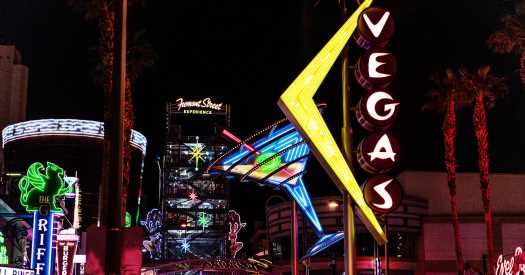 In a city always looking for the next thing, the 52 Places Traveler finds some magic when he takes a look back. 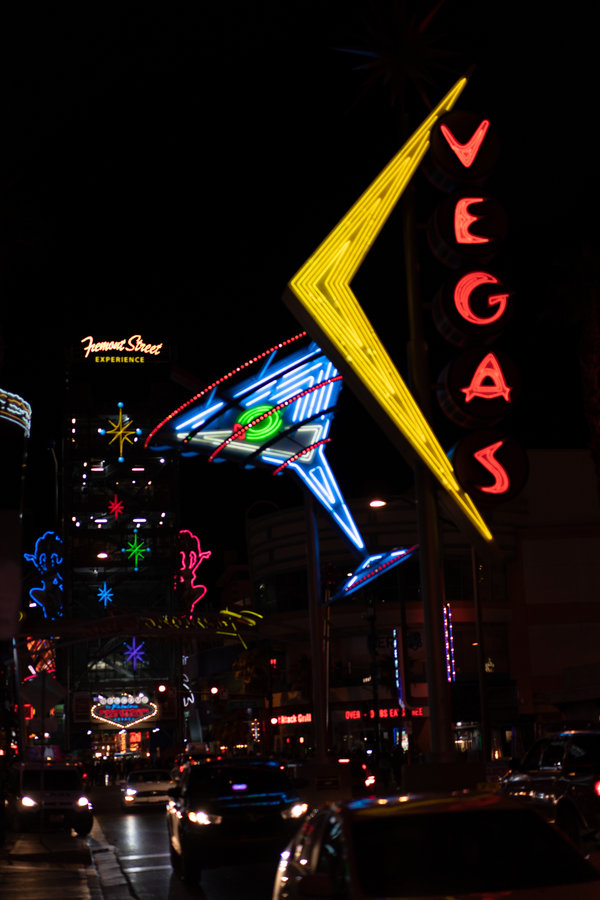 Our columnist, Sebastian Modak, is visiting each destination on our 52 Places to Go in 2019 list. He arrived in Las Vegas straight from Ontario, Canada, where he visited the ice caves.

In the 1950s, Las Vegans looking to decompress would head to Atomic Liquors on Fremont Street, order an “Atomic cocktail” and head to the roof to watch mushroom clouds rising from the nearby Nevada Test Site. A mile and a half away, the notorious mobster Eddie Thrascher was dealing with a problem customer at his bar who would get drunk and punch in the same section of wall night after night, by putting spikes behind the drywall. Both places still exist: Atomic Liquors’s red and yellow sign still points the way to its retro interior. And Thrascher’s spot has, since 1962, been Dino’s, which today calls itself “the last neighborhood bar in Vegas.”

It’s easy to be blinded by the bright lights of Las Vegas, deafened by the constant noise of chiming slot machines and roadside hustlers advertising strip clubs. But right alongside the place obsessed with the transient and shiny, is another one that’s enamored with the past and anchored by a nostalgia for a “Golden Age” that may not have even existed.

It was my first time in Vegas and, like so many travelers before me, I started with the Strip. Despite trying my hardest to not come in with preconceptions, I found the Strip a hard place to like. I felt a poignant sadness sink in when I came downstairs from my room at the new Park MGM to get a cup of coffee and saw, at 7:30 a.m., the slot machines full of people, some clearly nearing the end of their all-night marathons.

In those first days, I felt lonelier than I’ve felt anywhere on this trip which was nearing the one-month mark, the isolation intensified by the couples, bachelor and bachelorette parties, and hordes of college students from California who surrounded me everywhere I went. I’ve never had much of an interest in gambling and even the food scene around the Strip felt like a simulacrum of other places: “New York-style” speakeasies and “L.A.-inspired” taquerias.

Then, through a chance encounter, the kind that only happens when traveling solo, I was introduced to the neighborhood of Paradise Palms, a planned development from the 1960s that feels like a time warp. Midcentury modern houses fan out on a curvilinear street pattern, each putting individuality on full display with brightly painted facades and classic muscle cars parked in driveways. I met two siblings, Will and Yocelin Lizarraga, 36 and 32, who invited me into their homes, outfitted in period-appropriate refrigerators, stoves, art, and couches. Will fronts a rockabilly band called Will and the Hi-Rollers, and Yocelin moonlights as DJ Maybelline, specializing in sets of ’50s and ’60s music played exclusively on 45-rpm vinyl.

“Vegas is an extreme version of the throwaway culture: it’s constantly out with the old and in with the new,” Will told me while I sat in his house, a classic 1963 Mod 2A home. “We’re an exception. I found some kid’s homework stuffed into the wall here when we moved in, dated from 1963. He’s probably an old man now. How cool is that?”

After a round of whiskey sours, expertly prepared by Will’s wife, Olga Carrera, (in period-appropriate glassware of course), we piled into a car and headed south of the city to the M Resort. A friend of theirs, Lance Lipinsky, was in Vegas on tour with his band Lance Lipinsky and the Lovers. He took the stage, decked out in a glittering shirt under a glittering jacket, hair gelled into a Jimmy Neutron pompadour. To a mostly older crowd, the band rocketed through classics from a time gone by, replete with all the piano-bashing boogie-woogie energy of the 50s. At one point, the Lizarraga siblings took to the stage too, twirling with such elan I had to remind myself repeatedly that these are people in their 30s and that this is 2019.

To make the time travel complete, we ended the night at Vickie’s Diner. It’s open 24 hours a day and outfitted in bright pink and chrome. The burgers drip with grease and the old man stationed at the grill engages in the kind of idle chatter that’s been endangered since the invention of the smartphone.

Having found one wormhole to a seemingly golden point in Vegas’s past, I started seeing even more as I ventured further from the casinos. I went to Atomic Liquors and Dino’s — twice each. At the beautifully arranged Neon Museum, I toured the “boneyard,” filled with neon signs from the city’s past, each with a story of its own.

Some of those artifacts carry a dark history — like the sign for the Chief Hotel Court, topped with the lit-up profile of a stereotypical Native American in a Hollywood war bonnet that had absolutely no relationship to the actual Native Americans who lived on a reservation mere miles away from where it stood. Other signs exemplify the city’s spirit of boldness and revolution, like the Martini glass marking Red Barn, the first openly gay bar in the city or the space age sign for La Concha, a hotel designed by Paul Williams, the well-known black architect who, the story has it, learned to sketch and write upside down because white clients wouldn’t want to sit next to him in meetings. All these stories were told to me by a guide who channeled the same nostalgic pride I had witnessed in Paradise Palms.

Other spots I loved

The Park MGM, where I stayed, was a little underwhelming, but it is home to Best Friend, a cheeky take on Korean BBQ from Los Angeles food truck pioneer, Roy Choi. Though it’s a bit of a tragedy to charge for banchan, the side dishes that are customarily free at Korean restaurants, the menu is fun, tasty, and bold. I especially recommend the Bibimboombap (get it?).

Another favorite was the Velveteen Rabbit, a cozy and classy bar run by two sisters in the heart of the Arts District. The cocktail menu is constantly rotated and on the chilly night I went there were options aplenty to warm me right up.

Just a 30-minute drive from the Strip is a natural wonder, the Red Rock Canyon National Conservation Area: A set of staggeringly tall rock formations the color of burned copper, it is a paradise for rock climbers and hikers. I drove the 13-mile scenic loop through the park in a single afternoon, going for short strolls along the way.

I spent a rainy afternoon inside the Pinball Hall of Fame, a 10,000-square-foot warehouse packed with playable pinball machines dating back to the 1950s. It’s a nonprofit institution run by volunteers. There were tourists there too, but the vast majority of visitors seemed to be local families, the children running from machine to machine with their allotted bag of quarters to battle it out on games as old as their parents.

That’s not to say that everything old in Las Vegas is great and everything new is boring. I was impressed by the rapidly expanding Arts District, with its galleries and burgeoning cocktail scene. I also toured the Palms Casino Resort, a once tired establishment just off the strip that is in the final stages of the most expensive renovation in Vegas’s history. I had been put off by some of Vegas’s in-your-face glam, but it’s hard not to be excited when walking through a hotel you encounter Warhol, Basquiat, Murakami, and more Damien Hirst than you’d find at most contemporary art galleries. (The Palms also has a collection of massive suites with amenities that include a bowling alley and a basketball court.)

Then there are the shows, with residencies playing a huge role in shaping the culture of the Strip. It’s not just nostalgia acts like Celine Dion or Blink 182 (millennials can be nostalgic too). Lady Gaga has a residency at the Park MGM. Cardi B is heading to KAOS, the newly built club at Palms Casino Resort, this spring. Both are new spins on an age-old Vegas tradition dating back to Liberace.

I wasn’t around for Cardi or Gaga, but in an attempt to do something really Vegas, I did attend a burlesque show put on by X Burlesque at the Flamingo Hotel, where I was the only man by himself in a room of couples and groups, on Valentine’s Day might I add. Not comfortable. But it was also an example of the way the city is innovating. The show has all the elements of traditional burlesque — the red-curtained theater, the stand-up comic interlude, the overt sexiness — but the soundtrack is hip-hop, heavy metal and country, and the dancers were just as comfortable hanging upside down on a pole as they were doing the can can.

The best drink I had in Vegas was at the Laundry Room, a hidden speakeasy tucked into the back of an expansive bar called Commonwealth in Downtown Las Vegas. Reservations are by text message only, there are no photos or phone calls allowed once you’re in, and guests are reminded that this is a “speak easy,” so “use your inside voices.” The bartender took my order by asking for flavors I liked — no specific spirit requests or drink comparisons allowed. “Smoke, pickles, and chili peppers,” I said. The drink tasted like all those things and more. My evening disappeared into hushed conversation in the small, Prohibition-style space, filled with dark leather, ornate accents, and gold-tasseled table cloths.

Is this really what Vegas 70 years ago felt like? Probably not. All the recreations and interpretations seem a little too clean, too consistent. In a city whose raison d’être has for decades been to create monumental experiences for tourists, performance is a habit that’s hard to break. But the effort behind it feels genuine. When you look past the artifice and give yourself over to the experience, it’s a lot of fun. And, in the end, isn’t that the point of Las Vegas?

Sebastian Modak is the 2019 52 Places Traveler. Before being selected to report on the annual New York Times list, he worked at Condé Nast Traveler as an editor and staff writer. @sebmodak