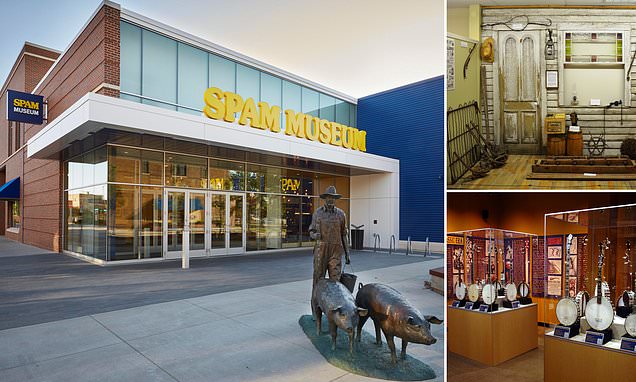 If you look hard enough there is a museum out there for you – as this round-up of bizarrely niche museums shows.

From spam to mustard, banjos to barbed wire, each has a huge selection of artefacts that will please very select groups of people. 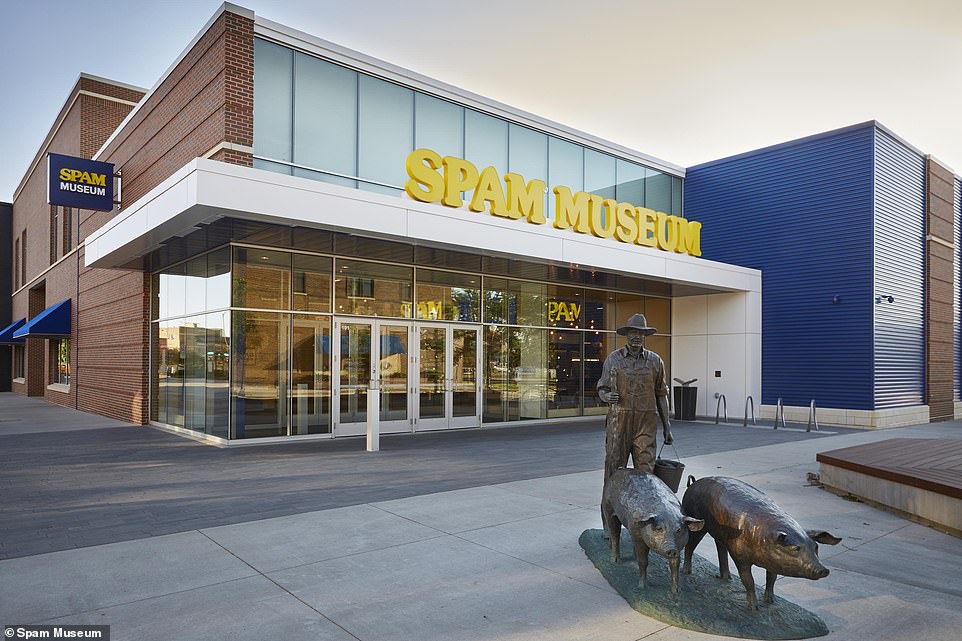 The entrance to the Spam Museum in Austin, Minnesota, which celebrates the canned meat product 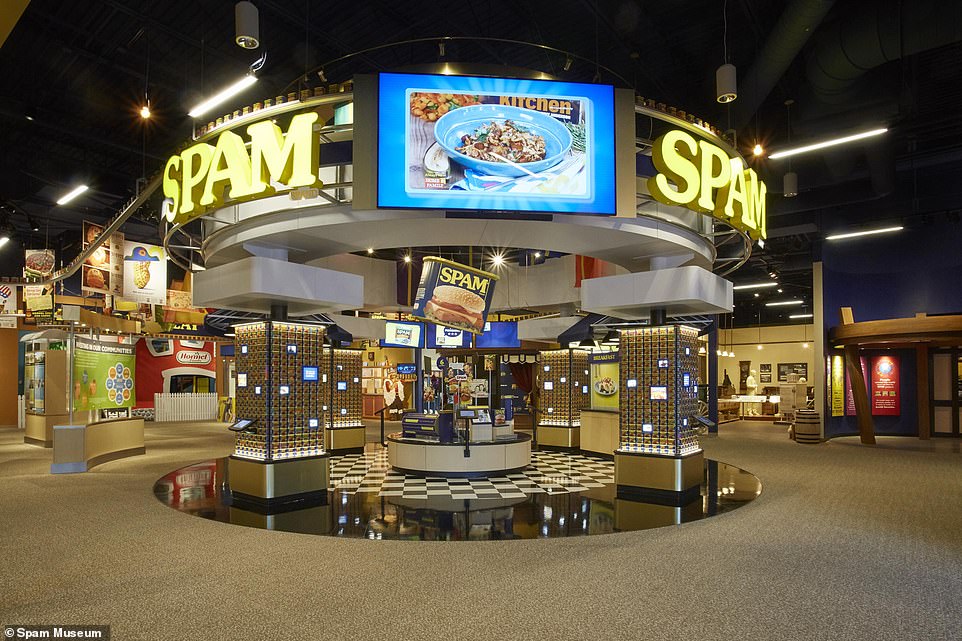 The Spam Museum in Austin, Minnesota, is a 14,000-square-foot celebration of the canned meat.

It has extensive Spam memorabilia dating back from the Second World War and how it played an important part of people’s diets during that time. 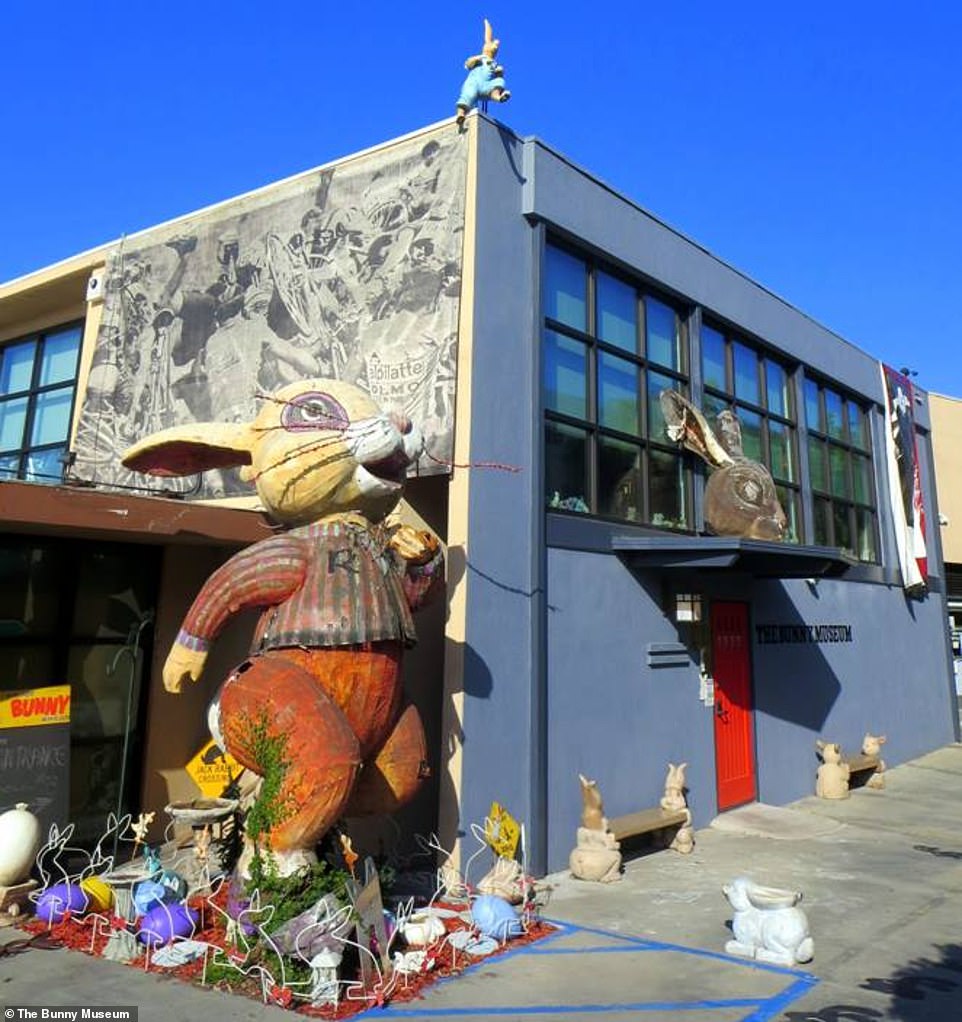 The entrance to the Bunny Museum in Altadena, California, which has a collection of more than 35,000 items of bunny memorabilia

Run by husband and wife team Candace Frazee and Steve Lubankso, the Bunny Museum in Altadena, California, has a collection of more than 35,000 items of bunny memorabilia.

Exhibits include rabbit-related art, literature, figurines, games and even Candace and Steve’s former real-life bunnies, which have been taxidermied and preserved for future visitors to enjoy.

In addition, the married couple’s three real rabbits can be found hopping through the museum’s halls. The website stresses, though, that the museum is not a petting zoo.. 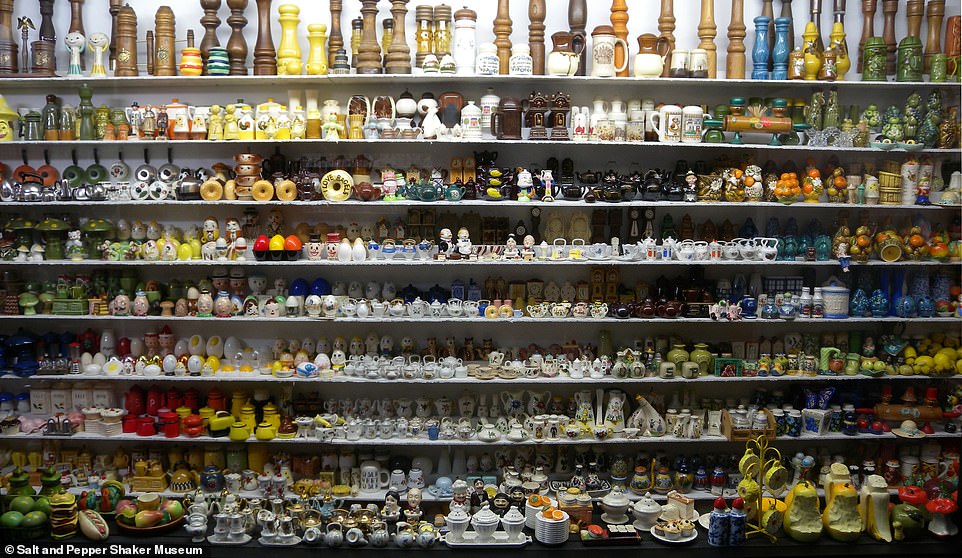 The museum is thought to be the only one of its kind in the world and the owners and curators, Andrea and Rolf, have been collecting shakers for more than 25 years.

According to the museum’s website, the collection ‘shows the changes in a society that can be found represented in shakers – as you walk through the museum you can see the changes from ancient times to the 1500’s, 1800’s, 1920’s, 40’s, 60’s all the way to present time’. 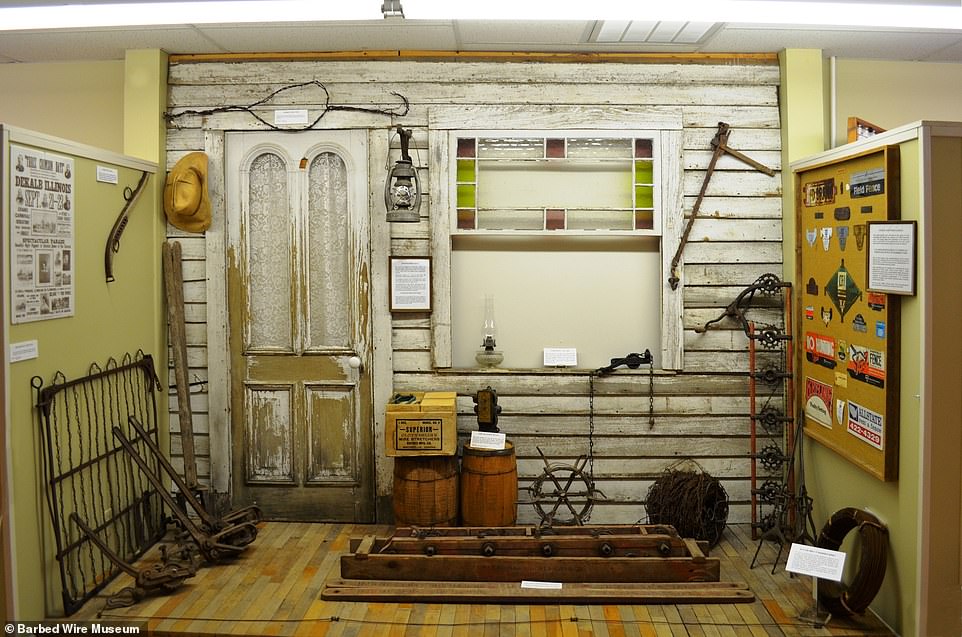 The Kansas Barbed Wire Museum, which explores the development of barbed wire and displays 2,000 varieties of it

Some call it ‘Devils Rope’ – but generally it’s known as barbed wire.

The Kansas Barbed Wire Museum tells its story, how it began as ‘a simple invention originally designed to protect a small family garden’ in America and became a type of fencing that would change the course of wars the world over.

The museum displays over 2,000 varieties of barbed wire, each unique and some dating back to the late 19th century. 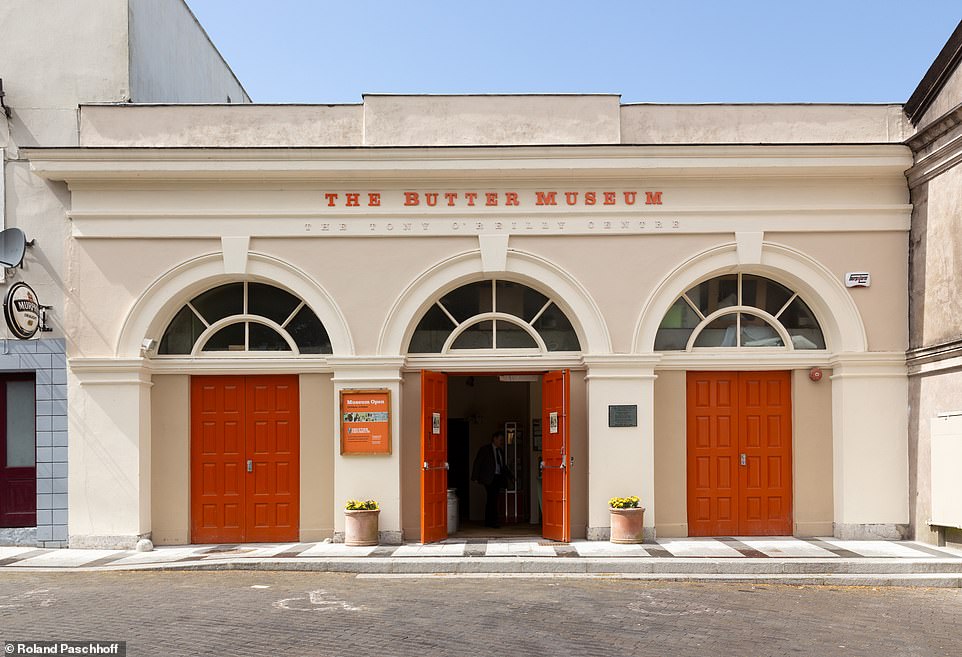 The entrance to the Cork Butter Museum, which explores the early history of dairy culture in Ireland 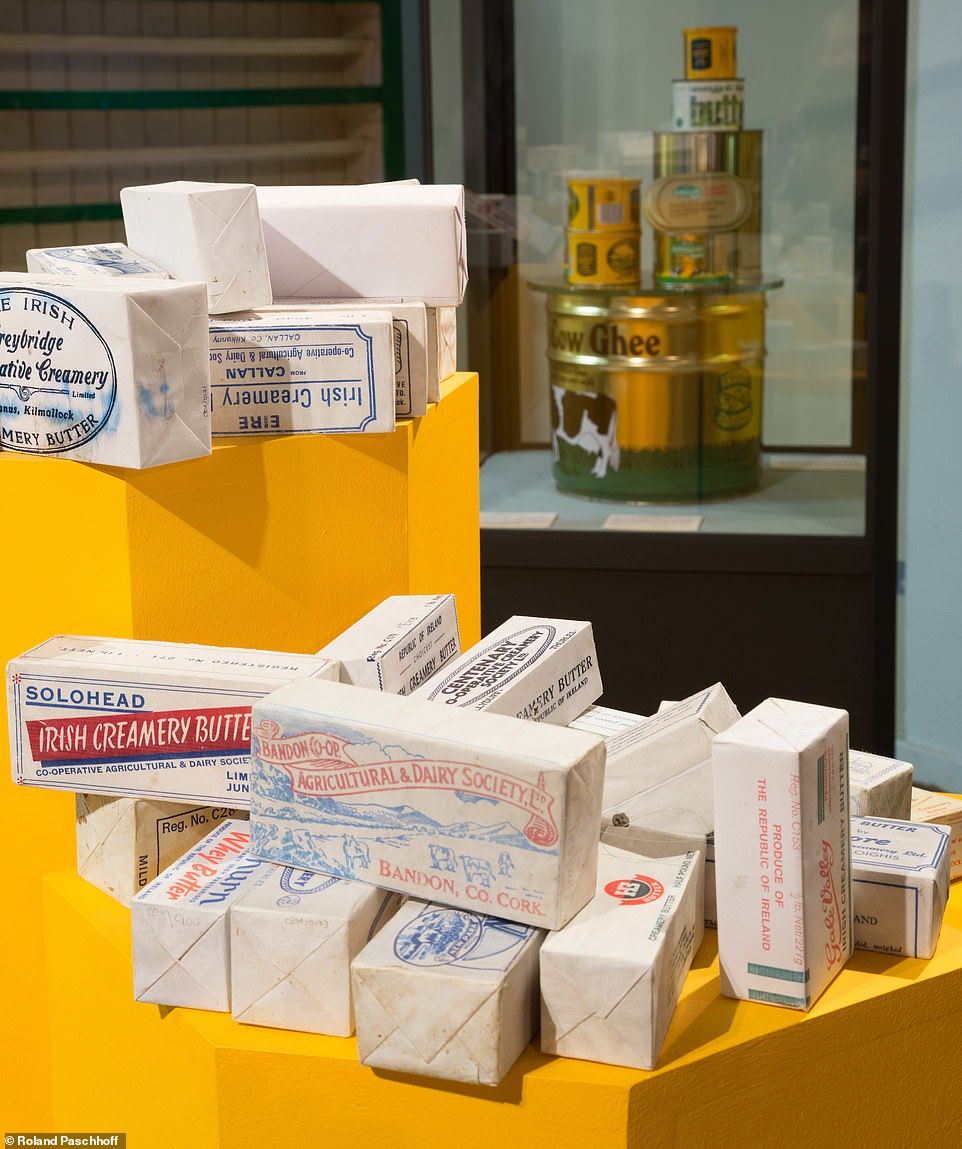 One of the displays inside the museum showing different types of butter. Visitors can learn about the Butter Exchange, which took place in the 19th century and the modern success of the Kerrygold brand

Celebrating Irish success in the butter trade, the Butter Museum in Cork explores the early history of dairy culture.

Visitors can learn about how the Irish used to preserve butter in bogs, the 19th-century Butter Exchange, which became the largest butter market in the world, and the modern success of the Kerrygold brand.

It also details how the tradition of butter making has changed over the years and displays a plethora of butter-making equipment. 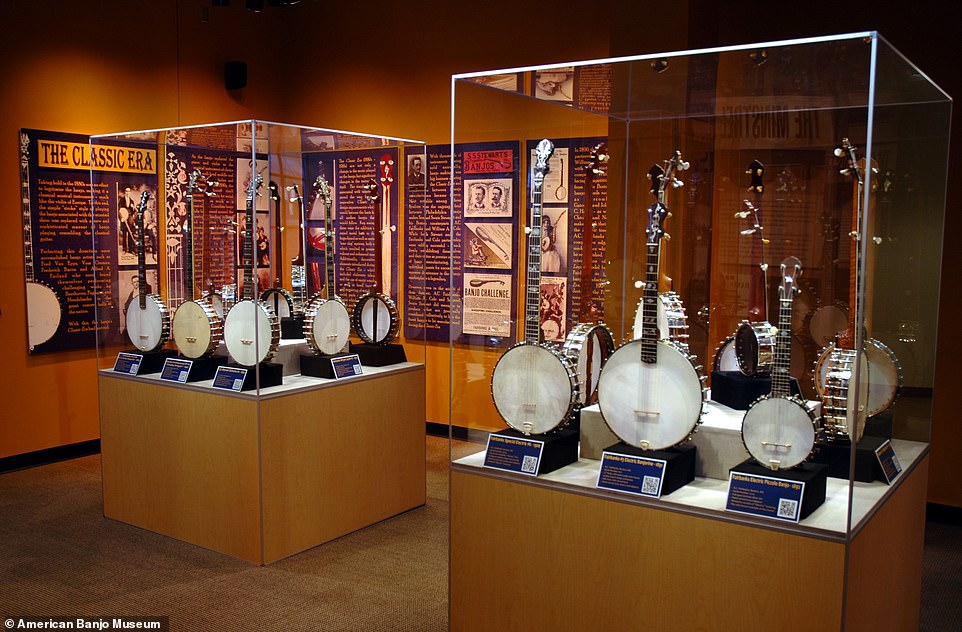 One of the displays at the American Banjo Museum in Oklahoma, which houses the world’s largest collection of banjos

The American Banjo Museum, according to its website, ‘is a world-class 21,000-square-foot facility honoring the rich history, vibrant spirit and unlimited future of the banjo’.

Inside visitors will find the world’s largest collection of banjos – 400 in total and some dating back to the 1800s – as well as recordings and videos of banjo performances.

The website adds: ‘As the banjo has evolved for nearly 400 years in the United States taking on many different forms and styles, the American Banjo Museum has expanded and made a commitment to present every chapter of the banjo’s story, from its roots in American slavery to its most recent identities in Bluegrass and international folk music.’ 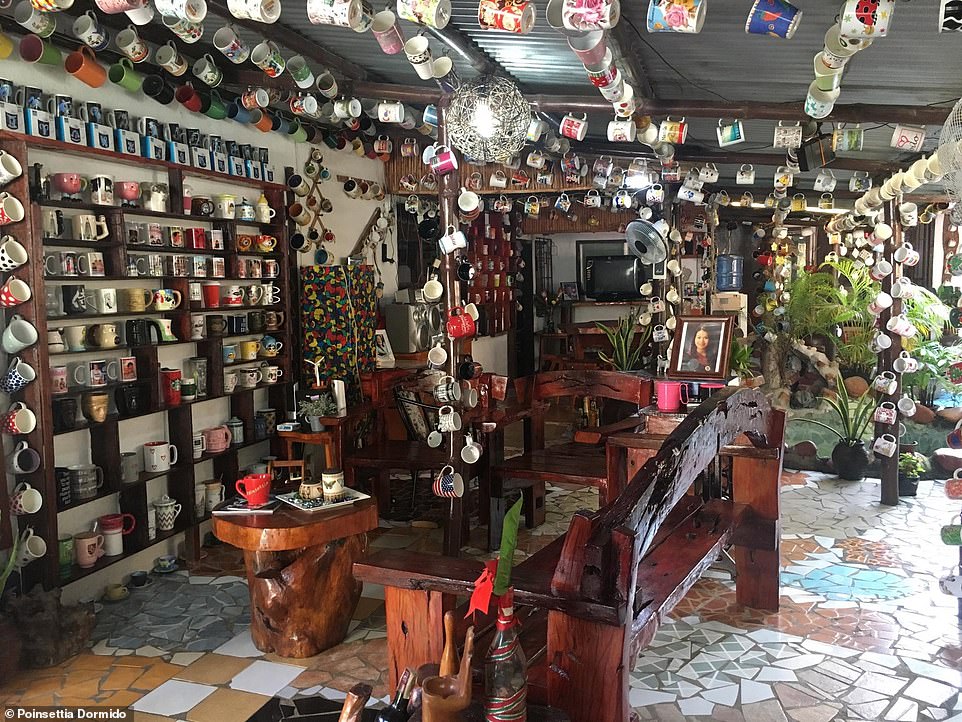 One of the rooms inside the House of Mugs in the Philippines, which houses the mug collection of mug fanatic Poinsettia Dormido

The House of Mugs has a growing collection of over 1,000 china cups all inside Poinsettia Dormido’s home in the Philippines.

Poinsettia first started collecting mugs many years ago when her husband would travel away for business and bring her back a mug as a souvenir.

Now she has so many mugs they take over her home, which she opens to the public so they can view her collection. 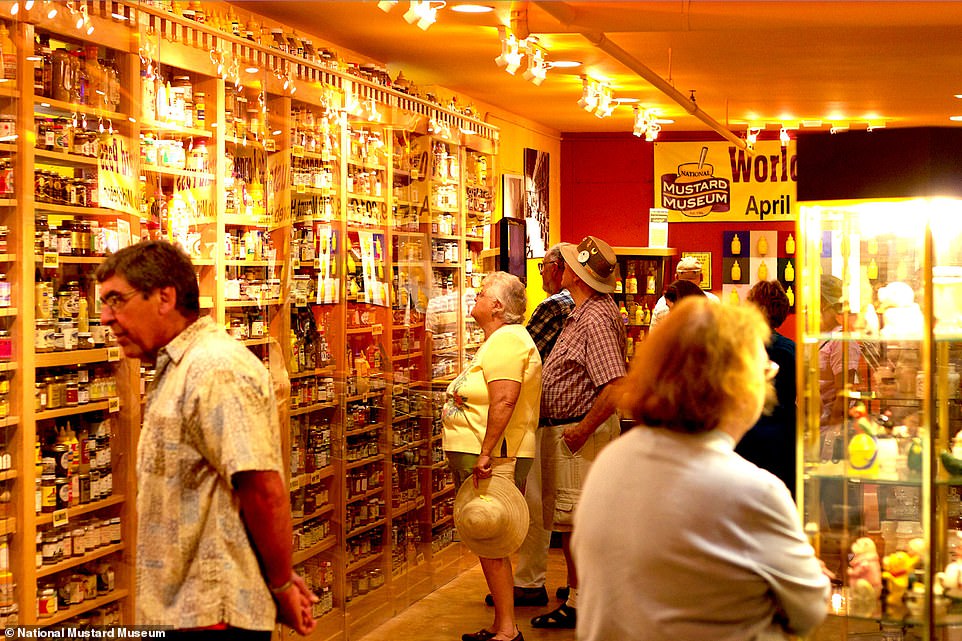 Visitors browse the vintage bottles, tins and jars of mustard that can be found inside the National Mustard Museum in Wisconsin

The National Mustard Museum in Wisconsin boasts 6,090 mustards from all 50 US states and more than 70 countries.

It has a collection of antique mustard pots, tins and jars as well as vintage adverts for the spicy condiment.

The museum opened in 1986 and moved to its current building in 2000 when it needed to expand due to growing visitor numbers. ‘We know mustard,’ the website exclaims. 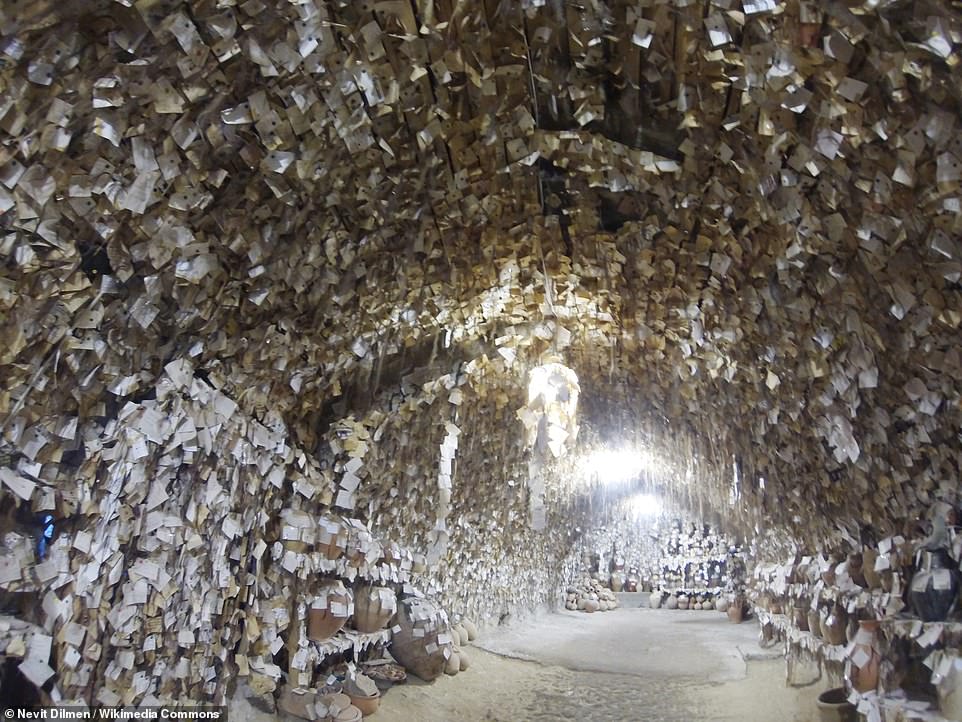 The Avanos Hair Museum in Cappadocia in Turkey, which houses 16,000 locks of women’s hair that have been pinned to the walls and ceiling

Located under a potter’s shop in Cappadocia, Turkey, the Avanos Hair Museum started 30 years ago.

The idea came when a friend of the potter, Chez Gallip, left a lock of her hair and he pinned it to the wall.

Now, more than 16,000 women have done the same. There are scissors and pins on hand for those who want to donate. 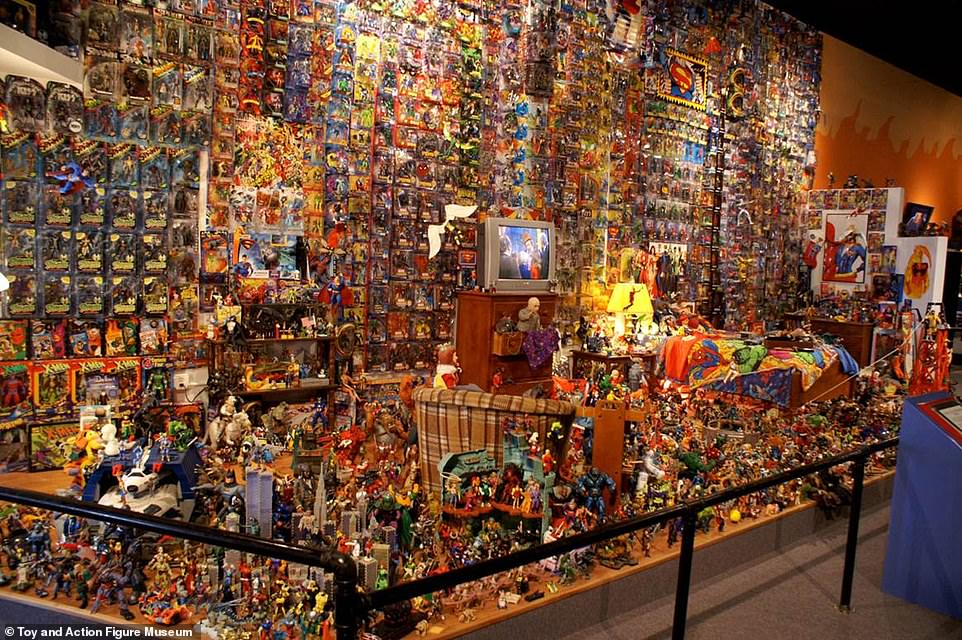 The Toy and Action Figure Museum in Pauls Valley houses over 13,000 separate figures, with some still in their original packaging

This is pure heaven for teenage boys (and adults who’ve never really stopped being teenage boys) – the Toy and Action Figure Museum.

The museum was born from a desire among local citizens – first formally voiced in 2000 in a series of meetings – for an attraction that would make Pauls Valley a destination city. A toy and action figure museum would be just the job, it was decided, and local toy designer and collector Kevin Stark stepped in to turn the dream into reality.

It opened its doors in 2005 and since then has been a roaring success, welcoming visitors, it claims, from ‘every state in the union’ – 50,000 in total so far.

The World of Accordions Museum, Wisconsin

Founded in 1993, the World of Accordions Museum in Superior, Wisconsin, documents the history and culture of the musical instrument.

It displays an incredible 1,300 accordions, which it describes as being a ‘feast for the eyes’. If you like accordions.

The museum only receives about 2,000 visitors annually, made up of tourists and researchers.