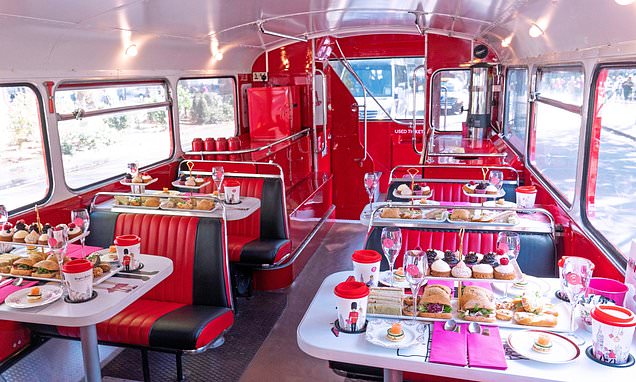 From brews on buses to finger sandwiches and scones at a posh villa on the Pacific Highway, Downton Abbey has made afternoon tea a must-do activity EVERYWHERE

Every week our Holiday Hero, Neil Simpson, takes an in-depth look at a brilliant holiday topic, doing all the legwork so you don’t have to. This week, he samples the unusual ways to enjoy afternoon tea all around the world.

Pastry chefs say the return of afternoon tea as a must-do activity is all thanks to Downton Abbey – and it shows no sign of abating. New experiences are constantly being launched – some are traditional, but others spring a few surprises amid the dainty scones.

Tea on the move 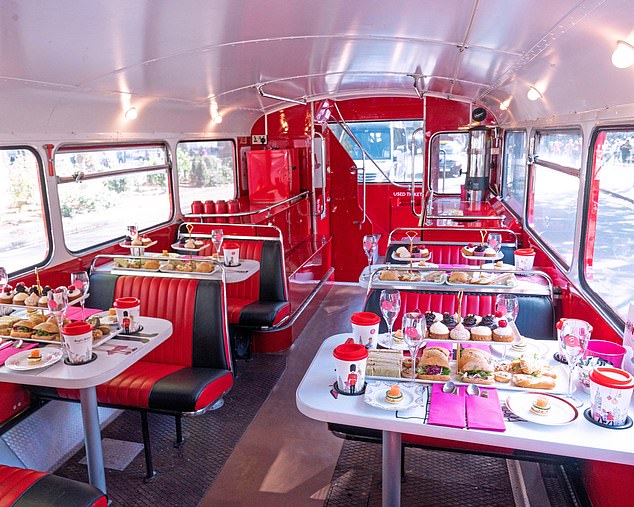 The Brigit Bakery bus, pictured, takes guests on 90-minute tours past the sights

Few vehicles on the streets of London look as inviting as the jolly, red Afternoon Tea Tour buses from Brigit’s Bakery (b-bakery.com). Colourful cake stands, pretty plates and well-secured cups of tea sit on every table as Routemaster buses take guests on 90-minute tours past the sights (£45pp). Special occasion? Add anything from an £8 glass of prosecco to a £275 bottle of vintage Cristal champagne.

In Scotland, a similar fleet of cleverly reconfigured old buses take afternoon tea fans around Edinburgh and Glasgow, with sandwiches, scones and treats served on stands made of Scottish slate (£35, redbusbistro.co.uk).

Alternatively, settle back into a classic racing green seat on a picture-perfect retro bus in Dublin for high tea expertly served by friendly, flat-cap-wearing staff (£40, vintageteatours.ie).

Tea by the sea

Los Angeles isn’t immune to the lure of the classic British afternoon tea. Head to the hills above the Pacific Coast Highway and enjoy it with ocean views from the big windows of the Founder’s Room at the Getty Villa.

There may be surprises amid the finger sandwiches and scones – the shrimp toast with radishes and tahini on pumpernickel bread raises a few English eyebrows.

But there’s plenty of tradition in the villa grounds where many of the sandwich fillings are grown. Free culinary garden tours take place after every afternoon tea (£35, getty.edu). 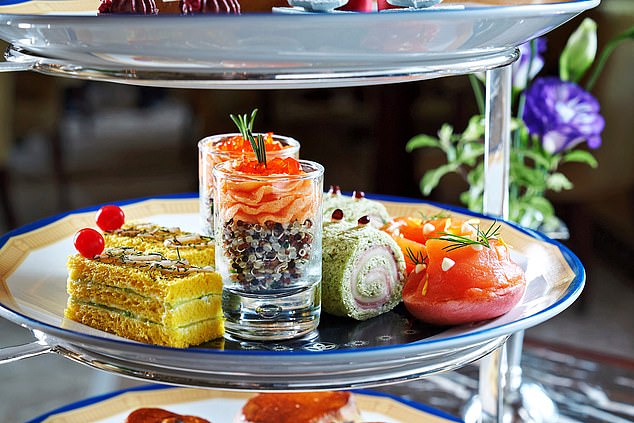 Head to Hong Kong, Shanghai or Beijing and add sparkle to your afternoon tea with an experience inspired by ‘the King of Diamonds’ himself – jeweller Harry Winston. The colours from four of his most iconic jewellery collections are reflected in limited-edition teas served at Peninsula Hotels in the three cities. Expect a twist on traditional smoked salmon sandwiches, plus a splash of Winston’s iconic pale blue in the china, table linen and the rich blue shortbread squares with vanilla cream (£40, peninsula.com).

In Rome, the corner of a sunny square is for ever England, thanks to Isabel Cargill and Anna Maria Babington, two eccentric women who opened a tea house there more than 125 years ago.

Today, Babington’s Tea Shop, alongside the Spanish Steps, is run by two of Isabel’s great-grandchildren and serves a Grand High Tea every day, with sandwiches, cakes, scones and home-made biscuits (£29, babingtons.com/en).