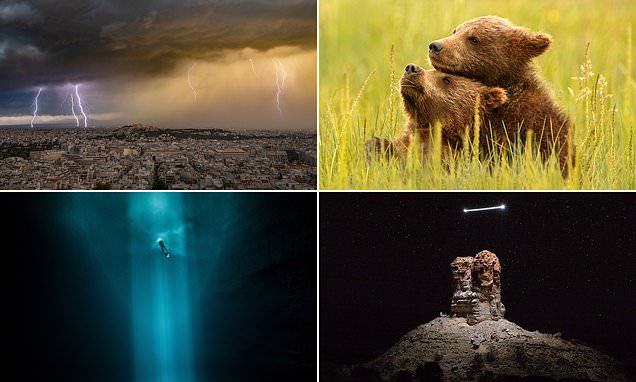 It’s one of the most prestigious photography competitions – so it’s no surprise that the some of the entries for this year’s National Geographic Photo Contest are truly stunning.

The annual contest honours photographers who have captured jaw-dropping shots from around the world, whether they be of wildlife, people or landscapes.

Here, with permission from National Geographic, we present 10 of this year’s jaw-dropping entries.

They include a photograph of dramatic summer lightning storm over Greece, two bear cubs embracing in Alaska and a haunting image of a mountain in Australia at night.

There is also a picture of sombre Day of the Dead celebrations in Guatemala and a stunning underwater photograph showing a diver in a deep natural pit in Mexico.

The winner of the 2018 contest is set to be announced next month, and there are also prizes on offer in three categories including wildlife, people and places. Scroll down and marvel. 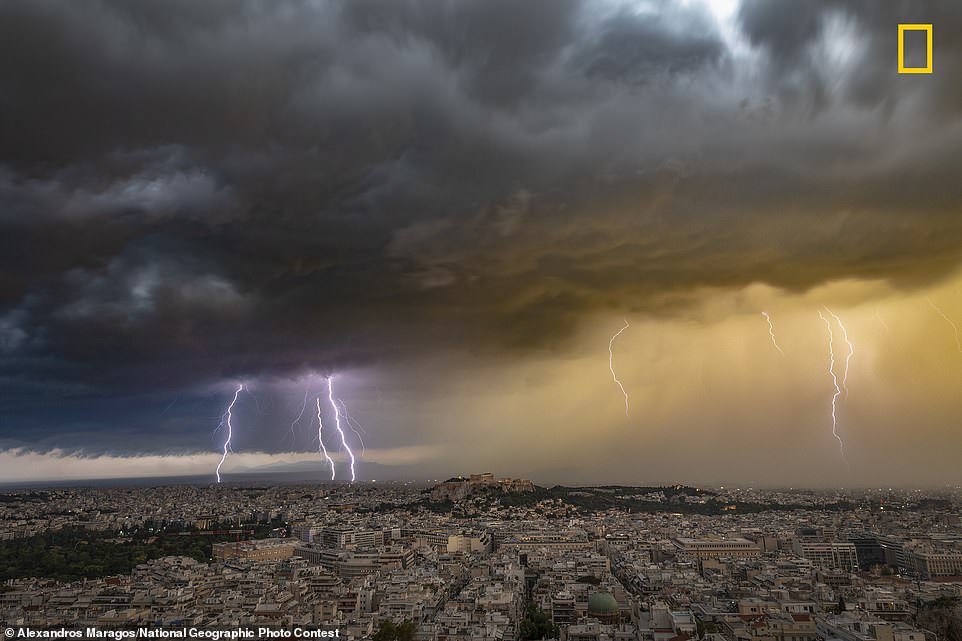 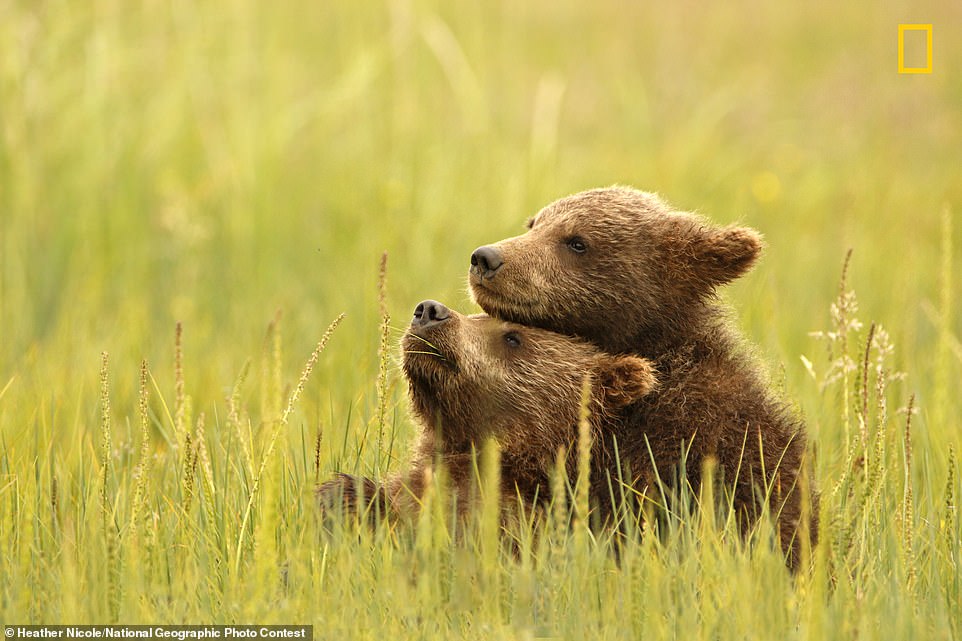 Two bear cubs share an embrace in a sweet snap taken by Heather Nicole in Lake Clark National Park in Alaska. She said: ‘One of the many highlights of the trip was watching these adorable cubs run, play and wrestle with each other. I was lucky enough to snap this shot as they took a very brief break from playtime to enjoy a moment of peace. Don’t worry, momma was very close by watching their every move’ 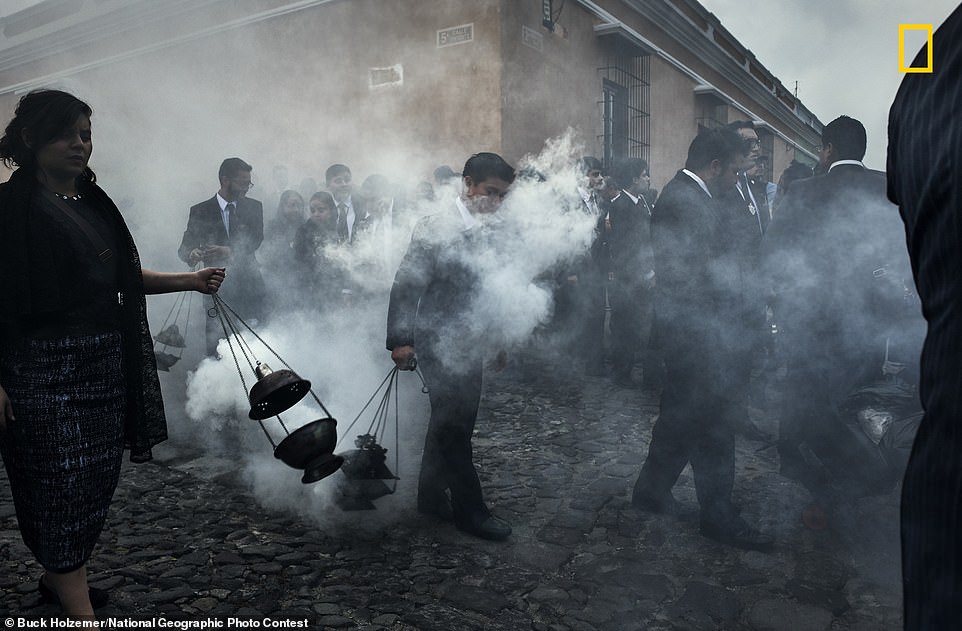 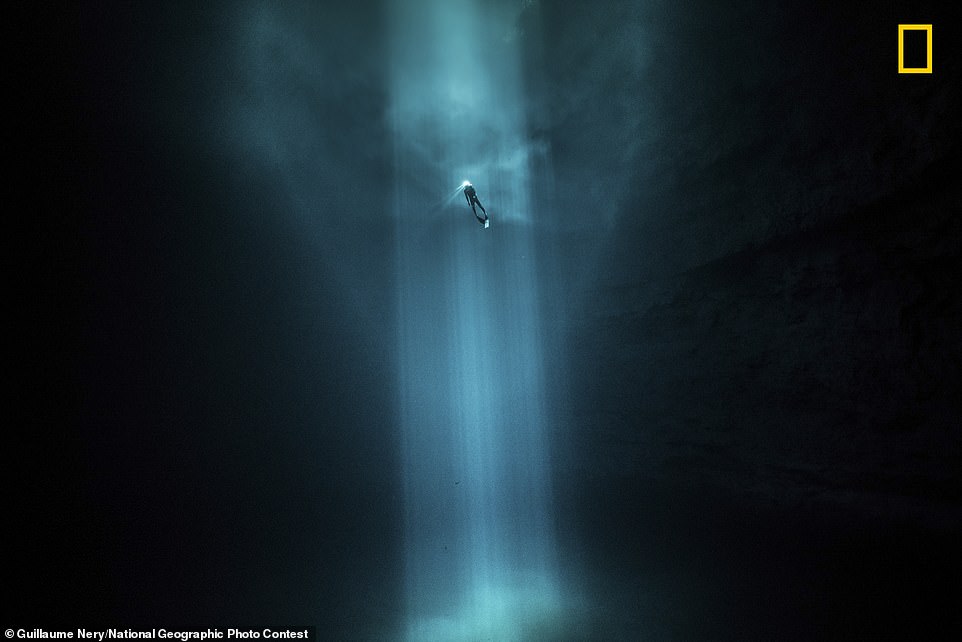 French photographer Guillaume Néry travelled to Mexico, where he took this stunning underwater image in a cenote. He said: ‘A cenote is a natural deep pit of crystal clear water that is found especially in Central America. They were once considered by the Mayan people as sacred. In the heart of the Yucatàn jungle, a free-diver was joining the surface of the cenote with the sun’s rays as a guide when the light behind him formed the illusion of an underwater face’ 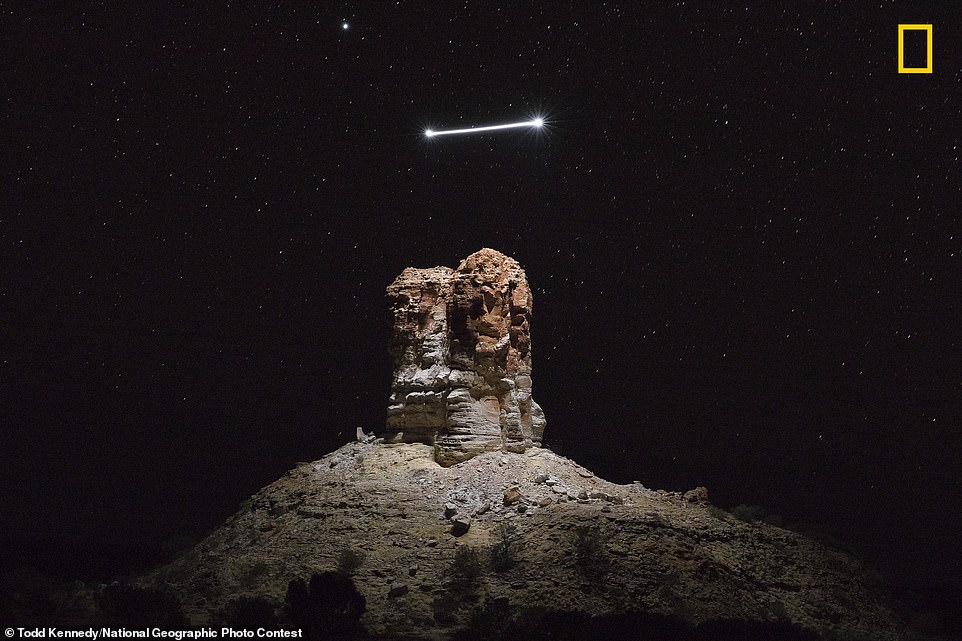 Todd Kennedy captured this haunting image of a remote mountain illuminated at night with aerial lighting in Australia’s Northern Territory, which he says reveals a face in the rock. He said: ‘Taking this shot was surreal. The wind made audible language like sounds and it was as if the mountain’s spirit was talking to me. The hairs stood up on my skin and I left the site immediately. It was only after reviewing the images I saw the face that had been staring at me’ 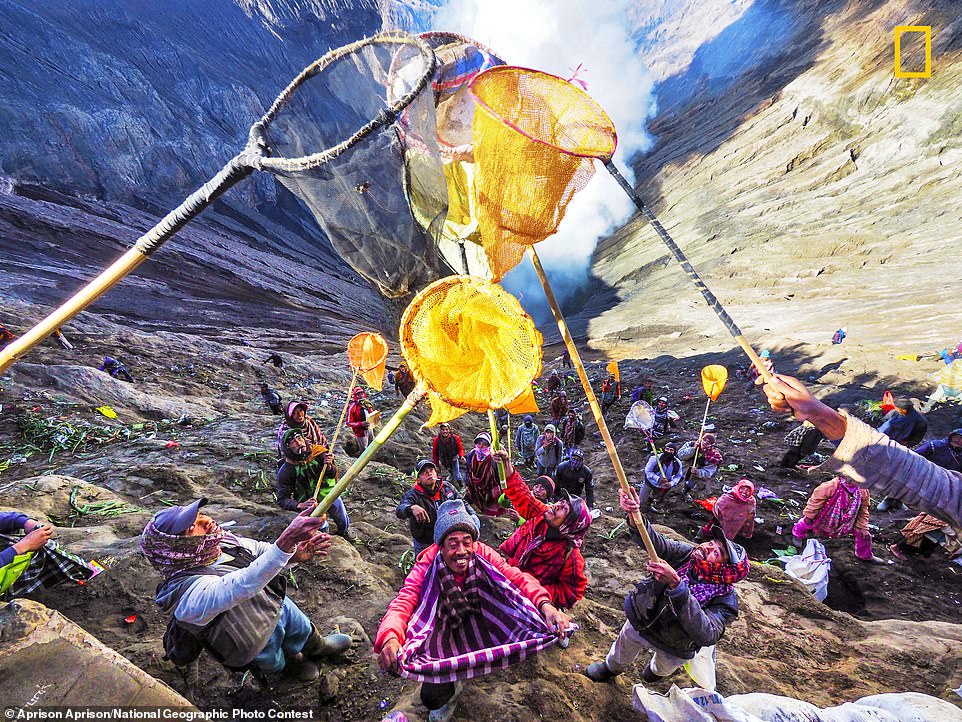 Aprison Aprison snapped this colourful image next to Mount Bromo on the island of East Java in Indonesia during a ‘kasodo’ event. He said: ‘They are hoping for some offerings from visitors and tourists. Visitors can drop chicken, goats, money and other valuable things to seek blessing from the God. Locals below try to catch it by using the net. They stand around a crater and try to balance to stop themselves from falling in’ 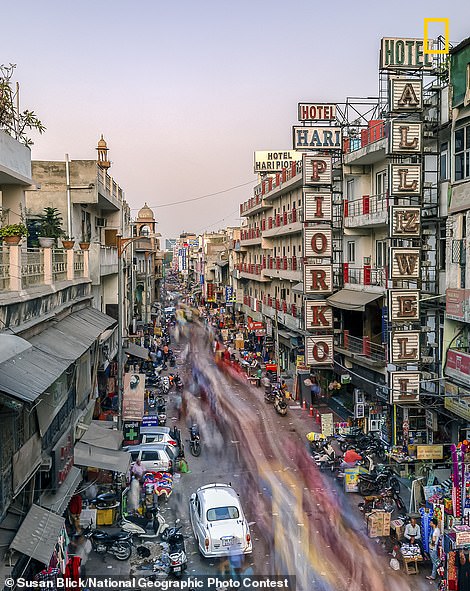 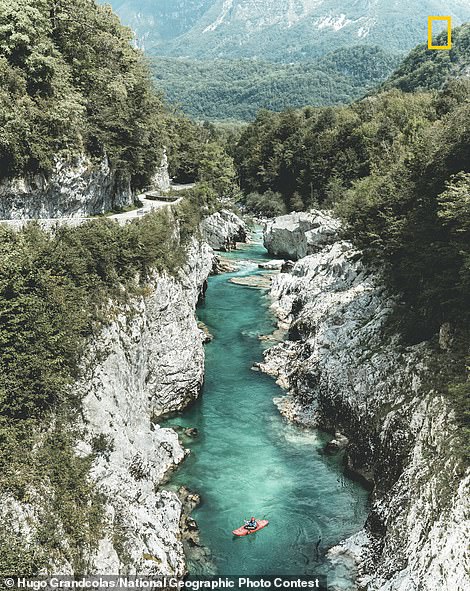 Susan Blick captured the image on the left showing the hustle and bustle of the streets of Paharganj in India. She explained: ‘We stopped for a break at a rooftop cafe, it was late afternoon, the light was softening and the street shadows were disappearing. I set up my tripod and with the help of an ND filter, I lowered my exposure to eight seconds to add emotion to the scene.’ Pictured right is a scenic shot of river rapids in Slovenia captured by French photographer Hugo Grandcolas. He said: ‘I love to capture details and for me this Red Kayak in rapids was a great opportunity. In the middle of my landscape, it represents everything I need for an adventure photograph’ 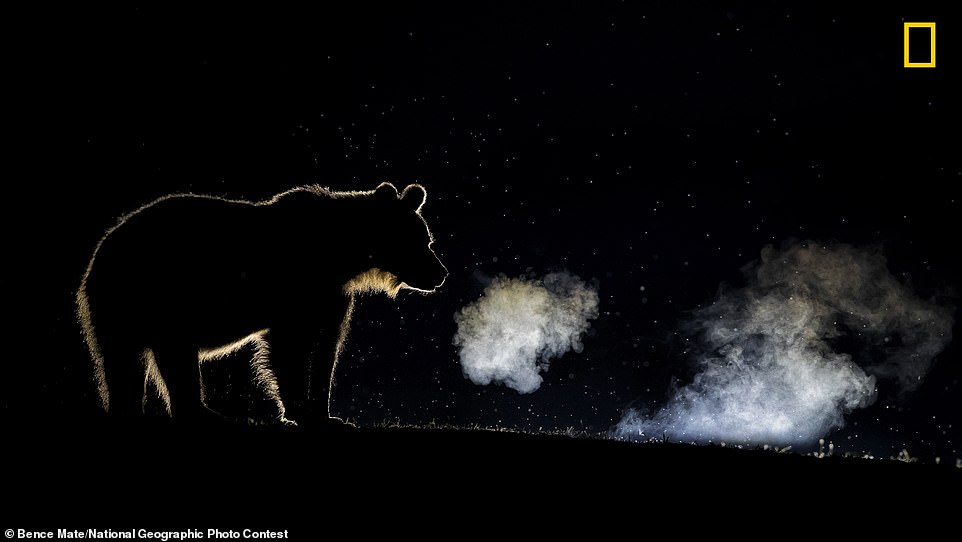 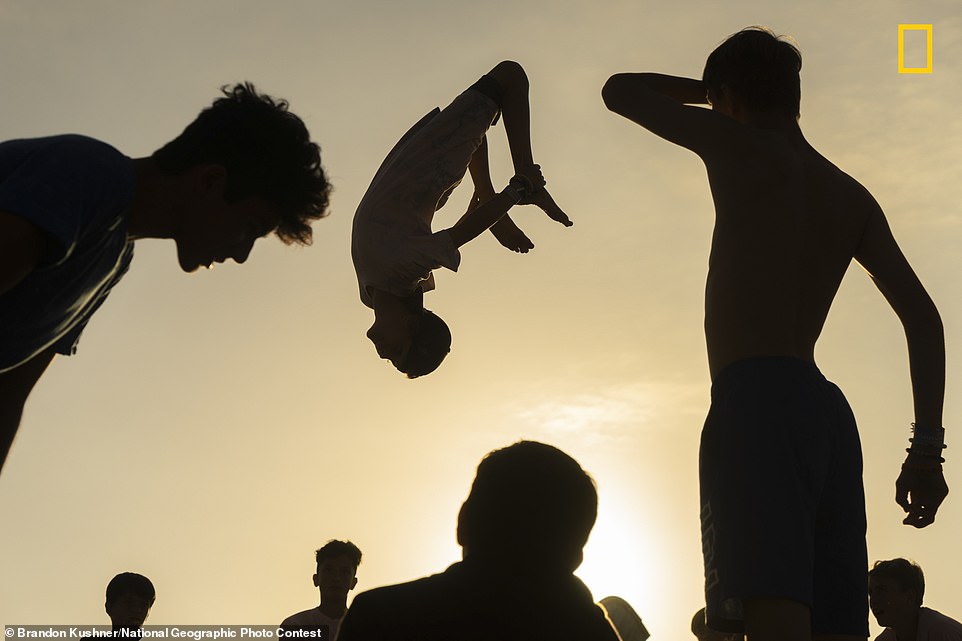 This amazing silhouette image of a boy flipping through the air in Venice Beach, California, was taken by Brandon Kushner