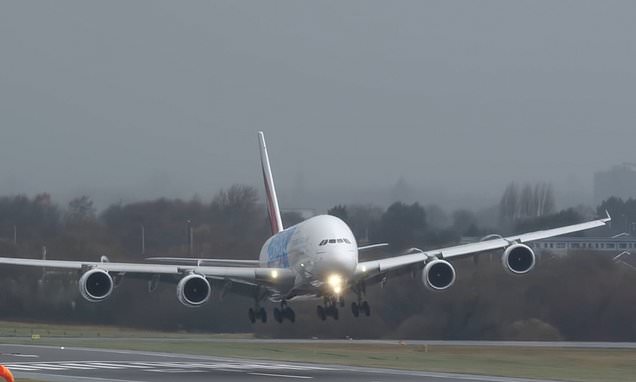 The easyJet crew gave up and diverted, but the Emirates pilots following had a big advantage – they were flying the monster A380.

Dramatic footage has caught the moment that the world’s biggest airliner was ‘toyed-with’ by severe crosswinds at Birmingham Airport and made a very bouncy landing.

Just moments before an EasyJet A320 had taken one quick look at the situation and powered straight off to Stansted. 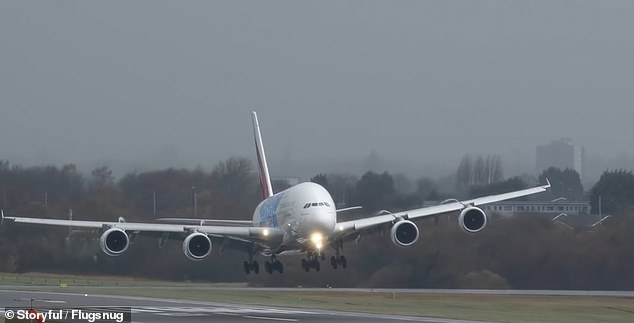 The video was shot by aviation enthusiast ‘flugsnug’, with the filmmaker describing his clip as unique.

He says: ‘The only time I’ve seen the world’s largest plane toyed-with by severe weather, and in particular windshear which caused other flights to abort the approach.

‘The Easyjet A320 simply didn’t try again and diverted away. This was a day when the wind grew stronger as it moved towards crosswind direction, finally erupting as shown here. The runway having been drenched minutes earlier, the avalanche of reverse thrust spray capped the Emirates giant’s performance!’

For nervous fliers, crosswind landings can be terrifying, but pilots receive thorough training on how to perform them.

On approach, they bring the plane in sideways to keep the nose lined up with the runway. It’s a technique known as a ‘crab’ landing.

Speaking to MailOnline Travel, Steven Draper, a representative of the British Airline Pilots’ Association (Balpa) and a former pilot, said of the crab landing method: ‘Landing in strong crosswinds or turbulence goes beyond the capabilities of the aeroplane’s automatic pilot. 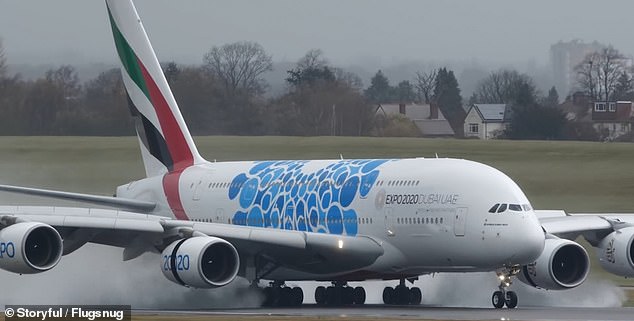 ‘A pilot should be alert and free from fatigue when landing, and be given the opportunity to develop excellent handling skills.’

Speaking to MailOnline previously, Dai Whittingham, the chief executive of the UK Flight Safety Committee, stated that while crosswinds appear dangerous, they are an everyday occurrence.

He said: ‘High winds in themselves are not dangerous but they can certainly be inconvenient, especially if the wind direction is across the runway.

‘All pilots train to land in high crosswind conditions and will have practiced to the aircraft limits in the simulator.

‘When any new aircraft is certified to carry passengers it comes with a published crosswind limit, which is the maximum that has been demonstrated by a test pilot during the certification process.

‘If the wind is outside that limit the crew will have to take the aircraft to an alternate airport where the wind is within limits (which means a runway that has less of a crosswind component).

‘In practice, the wind is rarely aligned fully with the runway so there is always a slight crosswind to deal with, it is just the amount of it that varies.’

Whittingham also noted that the public misconceptions about landing in strong winds is probably down to turbulence as the approaches are always bumpy.

Additionally, passengers do not have the same forward view as the pilot, which makes the sensation of being buffeted in all directions all the more uncomfortable.

He concluded by saying: ‘There is a briefing given before all approaches to ensure that both pilots understand the type of approach, what the division of duties are, and any special considerations.

‘A strong crosswind (or strong winds in general) would certainly be a briefing topic.

‘Both pilots will be monitoring the situation to ensure the wind does not exceed their limits and both will be alert to the possibility that the landing may need to be abandoned.

‘The pilots would also remind themselves of the correct techniques and decide on the additional safety factor to be applied to the target approach speed.’