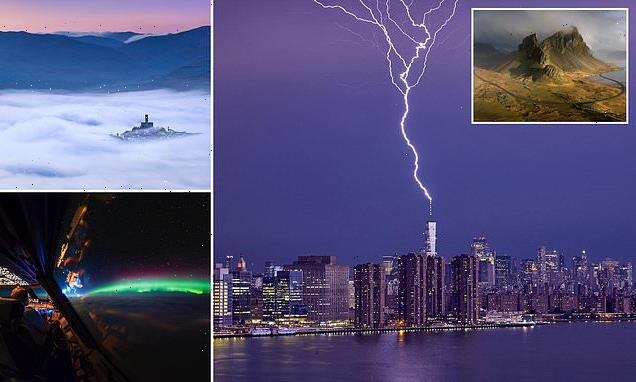 The amazing winners of the inaugural New York Photography Awards, from a lightning bolt striking One World Trade Center to a spectacular view from a Boeing 747 cockpit

These images show the unadulterated beauty of the Big Apple and beyond.

They are all winning and runner-up photographs from the inaugural New York Photography Awards which, despite the name, is actually open to any photographer over 18 ‘out to define themselves through their eye-catching photos… who have a story to tell’. There is, of course, a ‘New York Photography’ category, but entrants could also submit photographs to categories that included ‘Architecture’, ‘Black & White’, ‘Commercial’, ‘Nature’ and ‘People’.

The judges chose from over 3,000 photographs submitted from more than 50 countries, selecting winners based on ‘the creative messages and nuances behind each photograph’.

A shot of a thunderous New Zealand waterfall and a picture of a castle emerging from the fog in Tuscany impressed the judges and in the ‘New York’ category a spectacular bird’s-eye view of Manhattan and a mesmerising shot of a lightning bolt hitting One World Trade snared runner-up gongs. The shots of New York’s architectural landmarks by Italian photographer Raffaele Canepa lso struck a chord with the judges, so much so that they bestowed upon him the title of Professional Photographer of Year.

Kenjo Ong, CEO of the International Awards Associate (IAA), which runs the contest, said: ‘We’re truly astonished by the fact that many amazing photographers worldwide submitted their one-of-a-kind photographs in the awards. We were able to honour the efforts and time that was put into capturing these images, as well as bestow upon them the accolades they truly deserve.’

Below, you’ll find MailOnline Travel’s pick of the winners and runners-up. Scroll down to the very bottom to find a shot from Canepa’s winning portfolio. 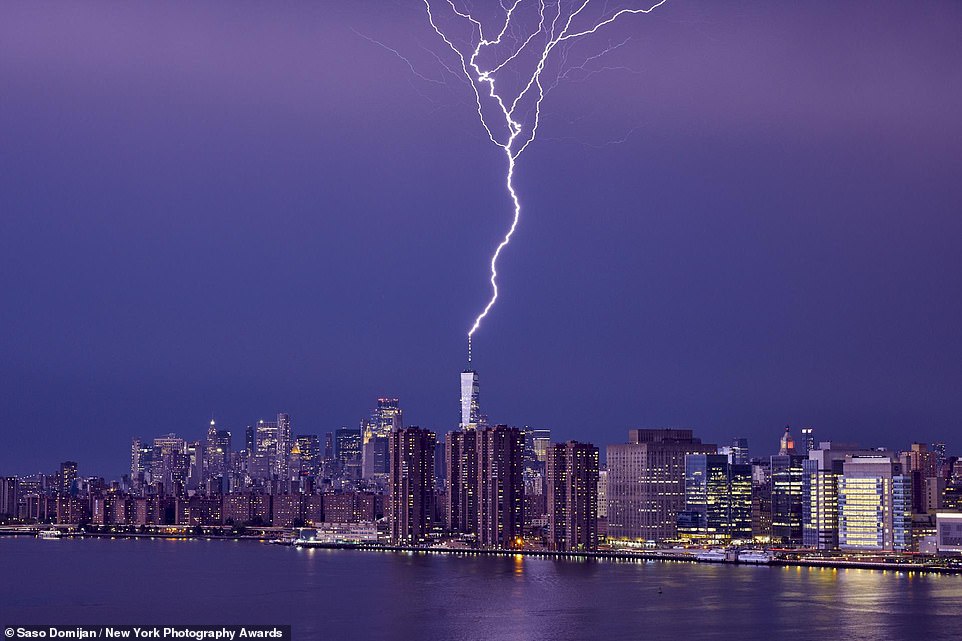 Photographer Saso Domijan set himself a goal to capture a bolt of lightning striking the antenna of the One World Trade Center in New York City, and succeeded with this photograph. He said: ‘I had no idea how many times it happens or if it would even happen at all.’ Domijan’s first few attempts didn’t go to plan, as rain and fog ‘cut the visibility to zero’. He explained: ‘So all I got were lightning strikes and no buildings. With patience and having alerts set in many weather apps I managed to catch the “perfect storm”. The rain and fog moved towards the east but high clouds still remained and with a few lightning strikes I managed to catch a perfect one.’ He described the experience as ‘once in a lifetime’. The awe-inspiring picture was a runner-up [known as a ‘Gold Winner’ in the contest] in the ‘New York Photography – Cityscapes’ category 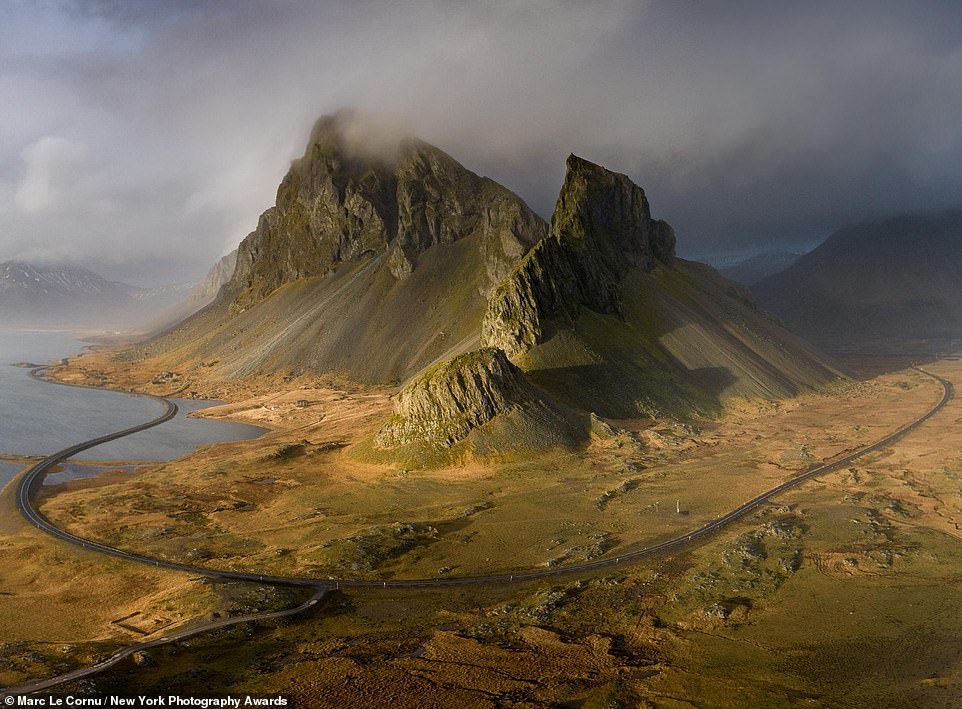 ‘I wanted this image to represent the sheer incredibly epic landscape in front of me during a visit to Eystrahorn [a mountain in the Eastfjords] in Iceland,’ says British photographer Marc Le Cornu of this powerful picture. It was a runner-up in the ‘Nature Photography – Aerial/Drone’ category, and was taken during an ‘amazing photographic road trip’. Le Cornu recalls: ‘There was a brief gap in the clouds allowing the sun to shine through and we stood in awe as it illuminated the volcanic mountains! With the storm clouds still surrounding the mountains, the view was breathtaking and hopefully, I captured that moment’ 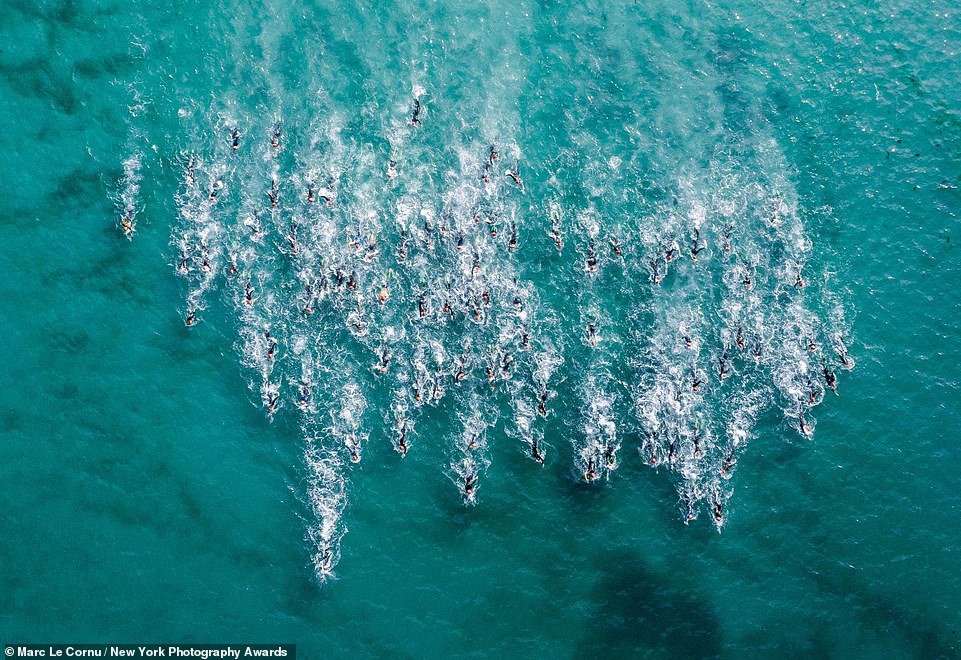 Le Cornu was also behind this camera for this stunning aerial shot, which was the overall winner in the ‘Editorial Photography – Sports’ category of the contest. It shows swimmers competing at the start of the 2021 Jersey Triathlon in September. Le Cornu was hired by the event organisers and sponsors to document the race. He says: ‘After a year where the athletes were unable to compete due to Covid, this explosion of human power was a release of pent-up adrenaline that the athletes had been keeping contained for such a long period of time. [They were] finally able to release it in the swim start of the triathlon.’ He adds: ‘I wanted to capture this important moment in the lives of these athletes’ 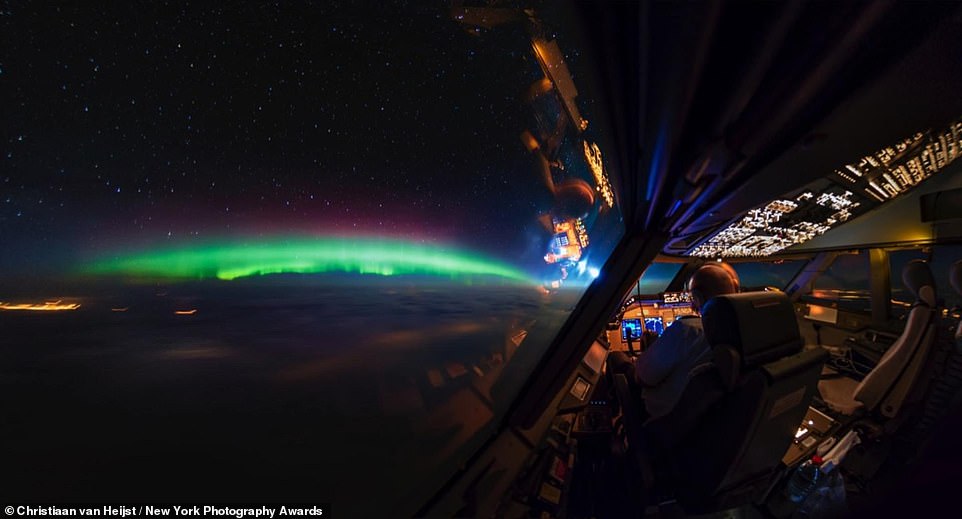 This spectacular picture was a runner-up in the ‘Long Exposure Photography’ category. Photographer and pilot Christiaan van Heijst reveals that it is a wide-angle shot taken from the cockpit of a Boeing 747, ‘flying high above the face of the earth’. He adds that the plane was ‘suspended between the stars and the world below’

Cast your eye above and you’ll see a breathtaking shot of the Milky Way illuminating the skies over the Sahara Desert in Egypt. This photograph – taken by Alexander Vershinin – was a runner-up in the ‘Nature Photography – Landscapes’ category 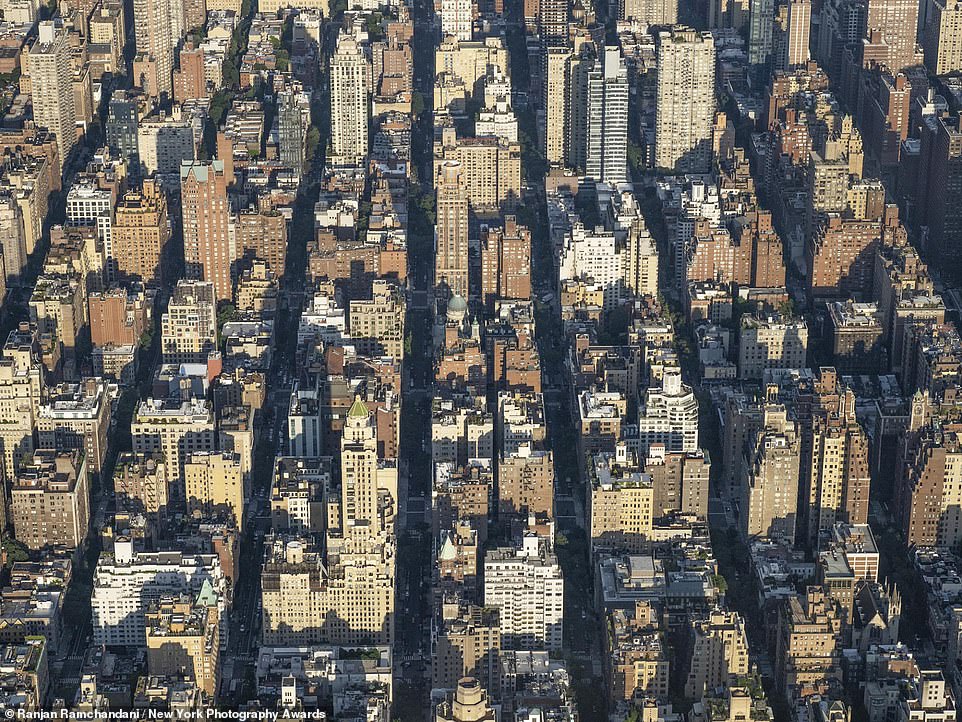 Feast your eyes on a runner-up in the ‘New York Photography – Cityscapes’ category. Ranjan Ramchandani took this photograph from an aircraft that was flying over Manhattan. He says: ‘After photographing the city from practically every vantage point on land and water, I decided to take a new dimension [by] making cityscapes from the air and this is one of them.’ He recalls: ‘I still remember my pilot showing me the typical frame of Manhattan from the sea which they call the “money shot”, but wanting to be different, I kept my eyes peeled till I saw this frame and requested a second fly-past to capture it’ 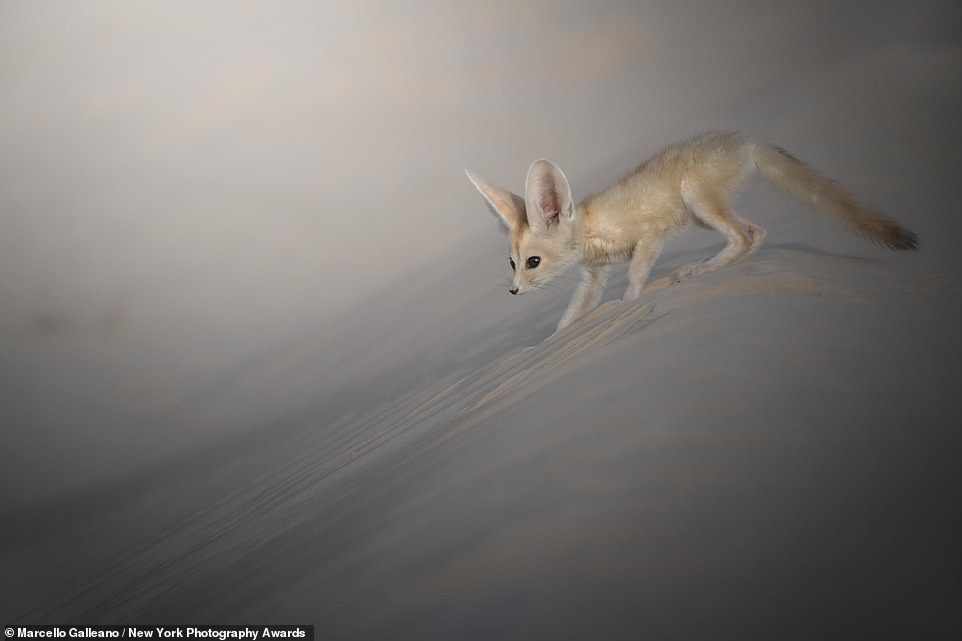 Here you’ll see a charming shot of a fennec, also known as a ‘desert fox’, moving through the Sahara Desert. Italy-based wildlife photographer Marcello Galleano was behind the lens. The photograph, which is titled ‘Spacewalk of a Fennec’, was a runner-up in the ‘New York Photography – Wildlife’ category 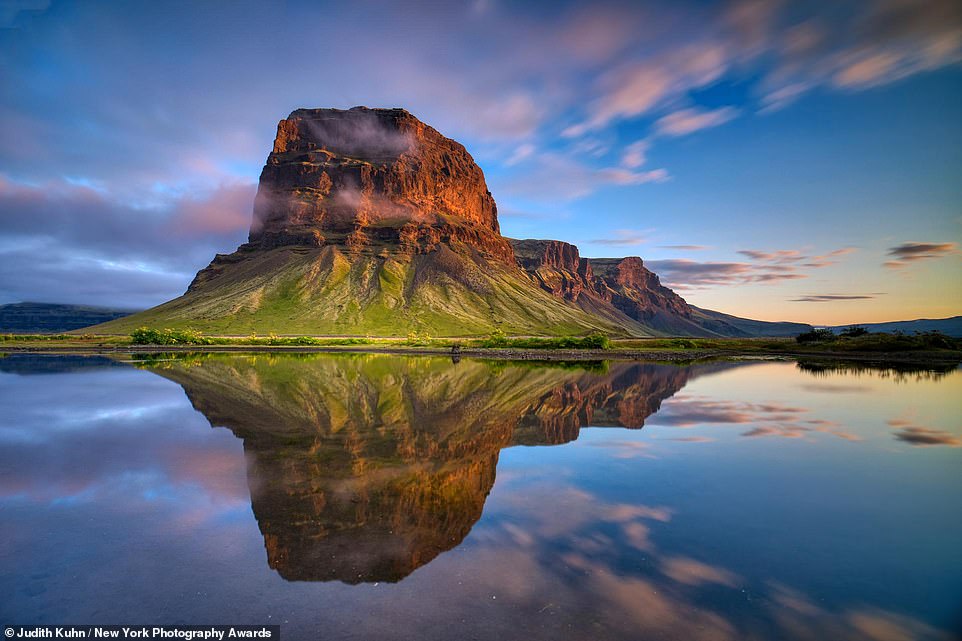 Lomagnupur, a subglacial mound in south Iceland, is shown in this spectacular shot, which was a runner-up in the ‘Nature Photography – Seascape’ category. It was taken by German photographer Judith Kuhn. With her camera in position, she waited for the clouds to disappear and for the water in the foreground to turn completely still before she captured this shot. Kuhn recalls: ‘Then the first rays of sun fell on the Lomagnupur and there was a wonderful contrast between the reddish stone and the green moss at the foot of the mountain’ 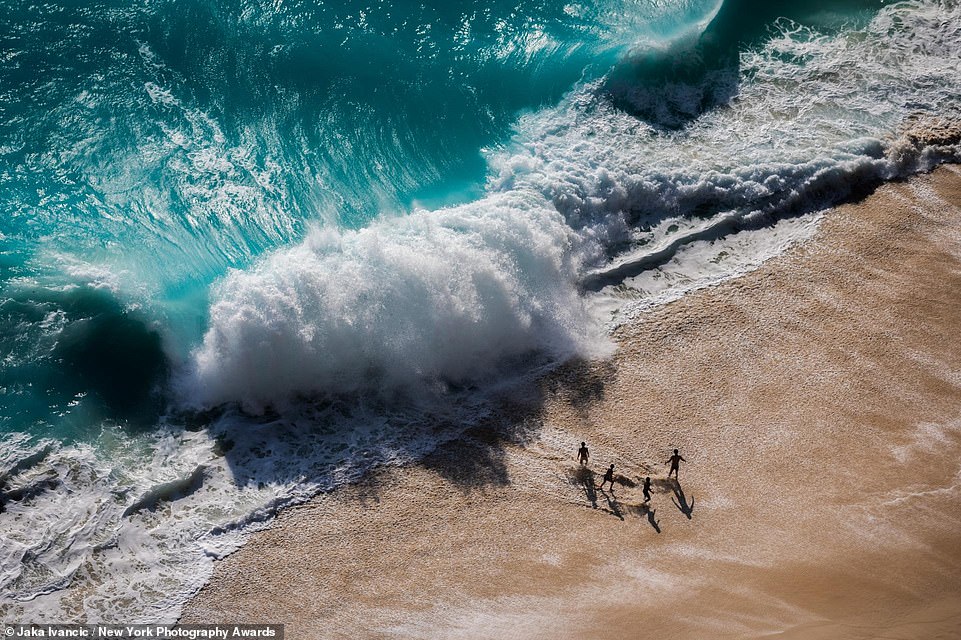 ‘Kelingking Beach on the Penida island [in Indonesia] is famous for its beautiful and also dangerous waves.’ So says Jaka Ivancic of the setting for this shot, which was a runner-up in the ‘Nature Photography – Seascape’ category. The Slovenian photographer adds that visitors ‘sometimes risk their lives’ on the beach by running alongside the waves 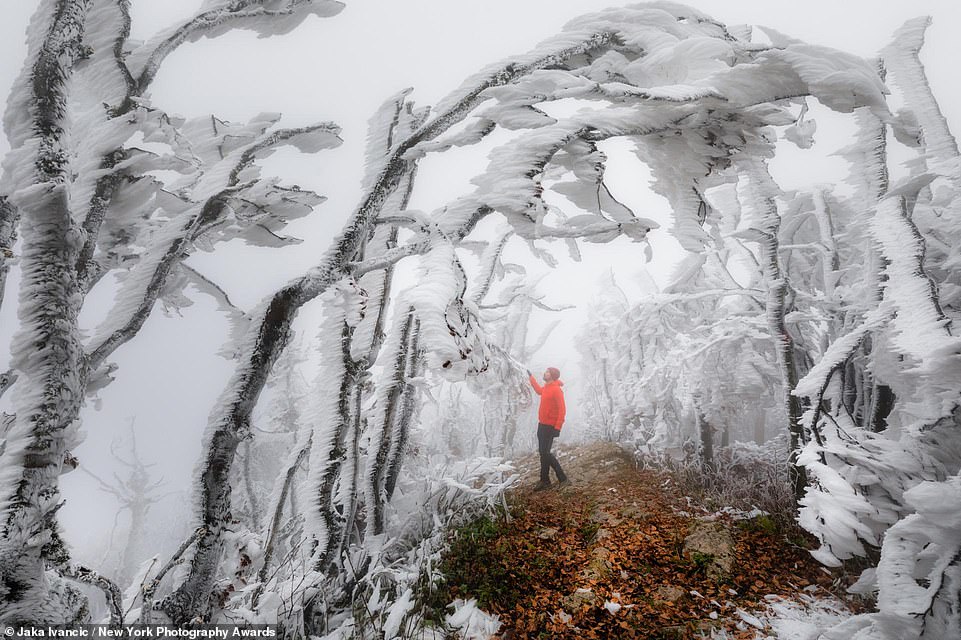 Ivancic also took this beautifully wintry picture, which was a runner-up in the ‘Nature Photography – Seasons’ category. It was captured in the Javornik Hills in Slovenia and shows ‘a combination of fog, wind and freezing temperatures’ creating ‘art’ on the area’s trees. Ivancic says: ‘It’s typical for this weather phenomenon that the ground remains brown, but the trees are totally embraced with linear ice formations’ 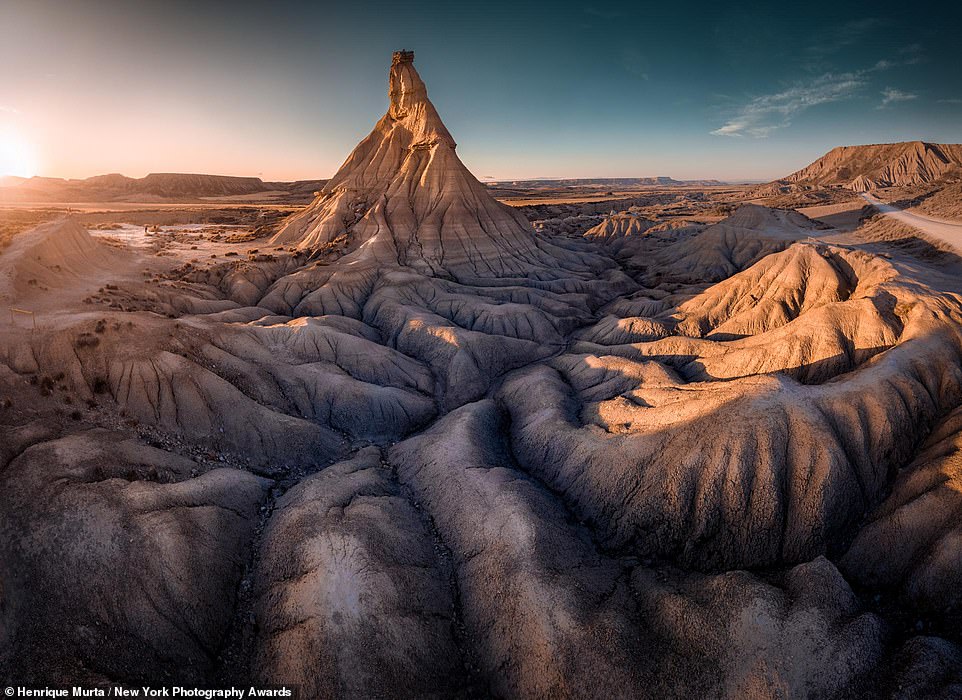 This enchanting picture was captured by Brazilian photographer Henrique Murta, whose portfolio was a runner-up in the ‘Nature Photography – Aerial/Drone’ category. It shows the Bardenas Reales, a semi-desert region in southeast Spain. He says: ‘This series is about one certain planet. A rare kind of planet you can only dream of’ 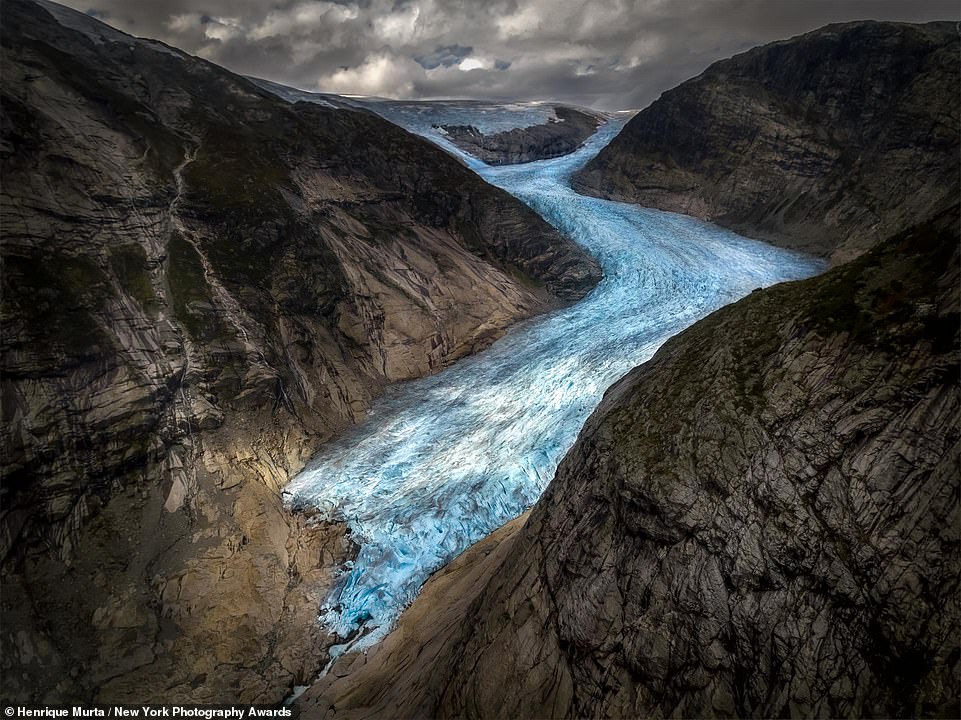 Another striking shot from Murta’s prize-winning portfolio. It shows Jostedal Glacier in Norway, which is the largest glacier in continental Europe 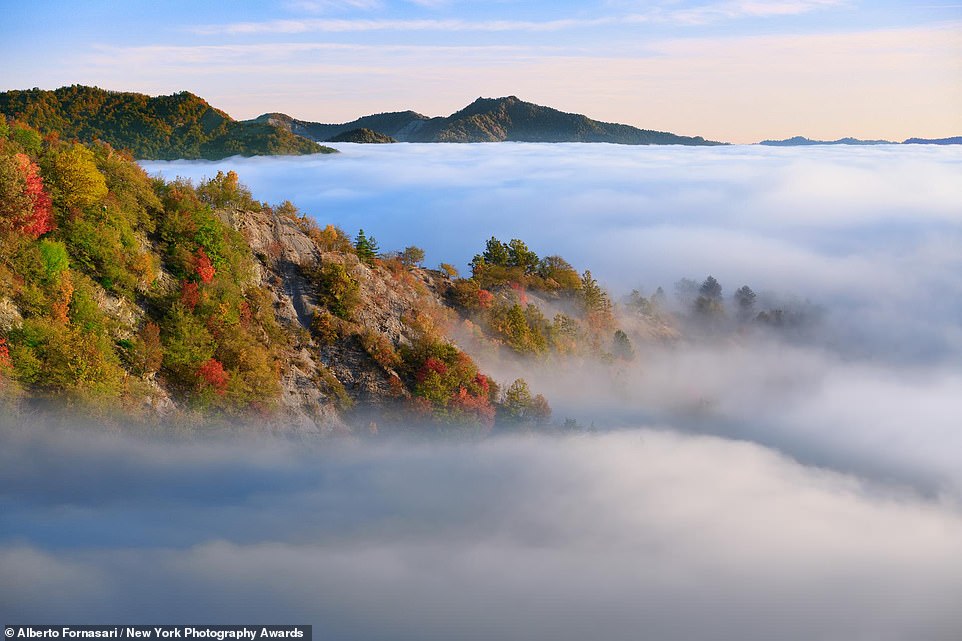 Italian photographer Alberto Fornasari captured this magical picture, which was a runner-up in the ‘Nature Photography – Landscapes’ category. It was snapped in the Parco Nazionale delle Foreste Casentinesi, in Campigna, Italy. Fornasari says that the national park has ‘the most spectacular foliage in Italy’. With his photography, he set out to show ‘the beauty of nature’ and ‘the colours of autumn through the light of dawn with the fog’ 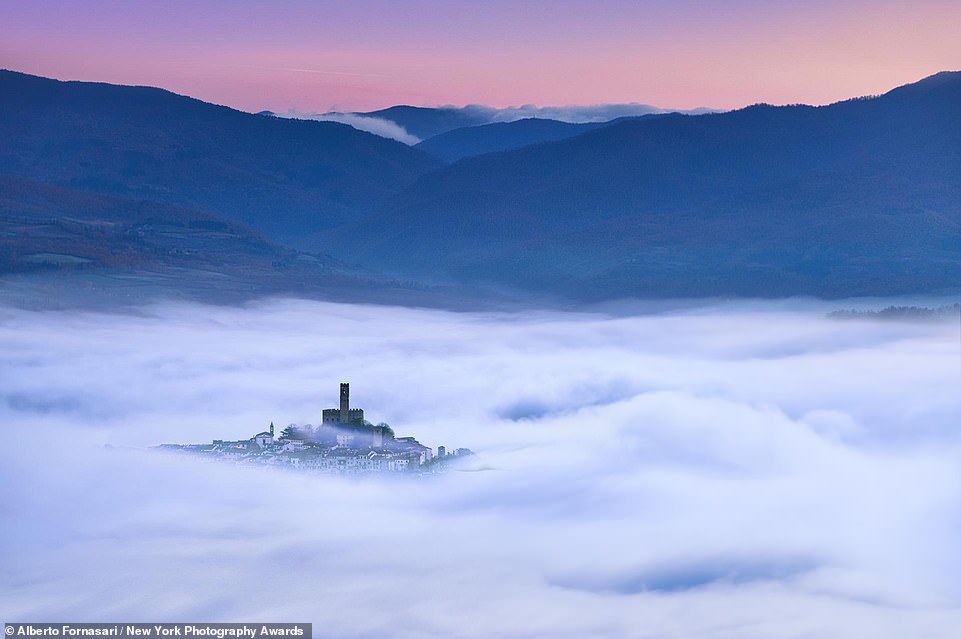 Fornasari impressed the judges yet again with this shot, which was a runner-up in the ‘New York Photography – Landscape’ category. It shows the 13th-century Poppi Castle, also known as Dante’s Castle, rising through the fog in the small town of Poppi, Tuscany. Highlighting the cultural significance of the castle, he says that the fortress is ‘among the best preserved in Italy’. Fornasari adds that the castle has ‘ten beautiful rooms inside’ and that visitors can climb its high tower, ‘from which you can admire the spectacle of the most typical Tuscan countryside’ 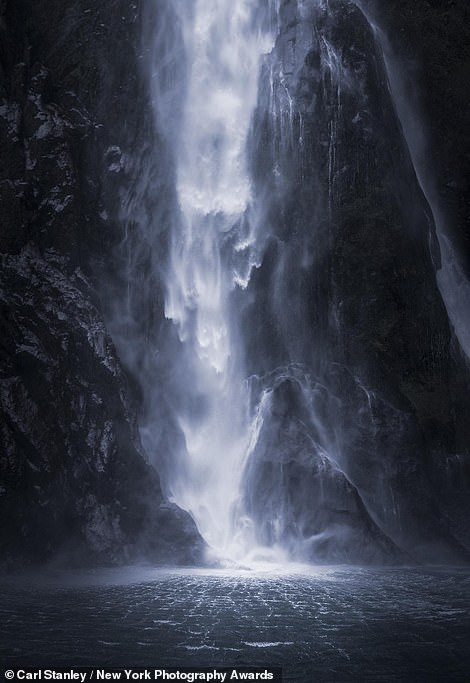 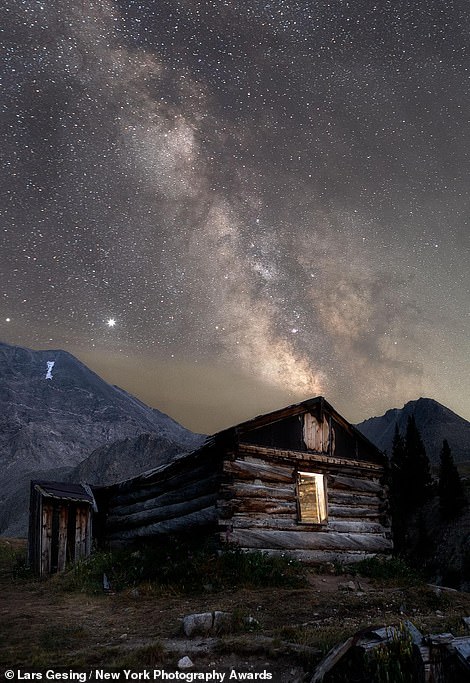 LEFT: This picture, taken by Carl Stanley in 2018, was a runner-up in the ‘Fine Art Photography – Landscape’ category. It shows a waterfall in Milford Sound on New Zealand’s South Island. Stanley set out to capture the ‘spray of water crashing against the rock at the base of the falls’. He adds that the ‘unique dark rock walls add a sense of mood’. RIGHT: Here you’ll see a runner-up in the ‘Nature Photography – Milky Way’ category, captured by Lars Gesing. It shows the stars of the Milky Way galaxy over a hut in the American West – an area that Gesing describes as a ‘megalith of history, dotted with the proud ruins of grit and determination’ 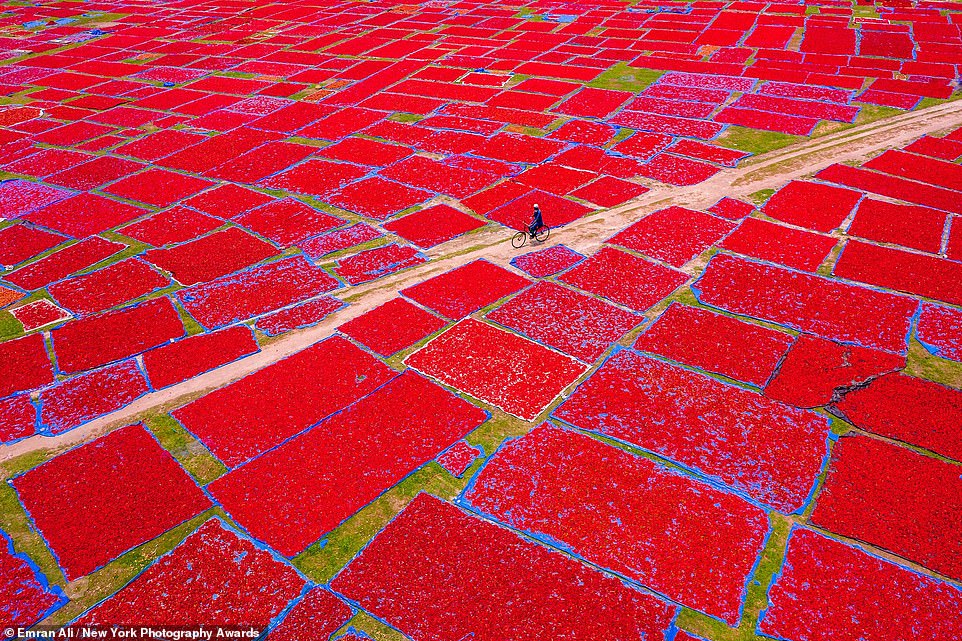 This vibrant picture shows a farmer ‘going home on his bicycle after laying out red chillies on plastic sheets’ in Panchagarh, a district in Northern Bangladesh. It was a runner-up in the ‘People Photography – Lifestyle’ category, and was snared by Emran Ali. Sharing the backstory to the picture, the photographer explains that ‘during the harvesting season, which lasts for two months, tons of chilis are laid out to dry creating a patchwork effect on open green fields’ 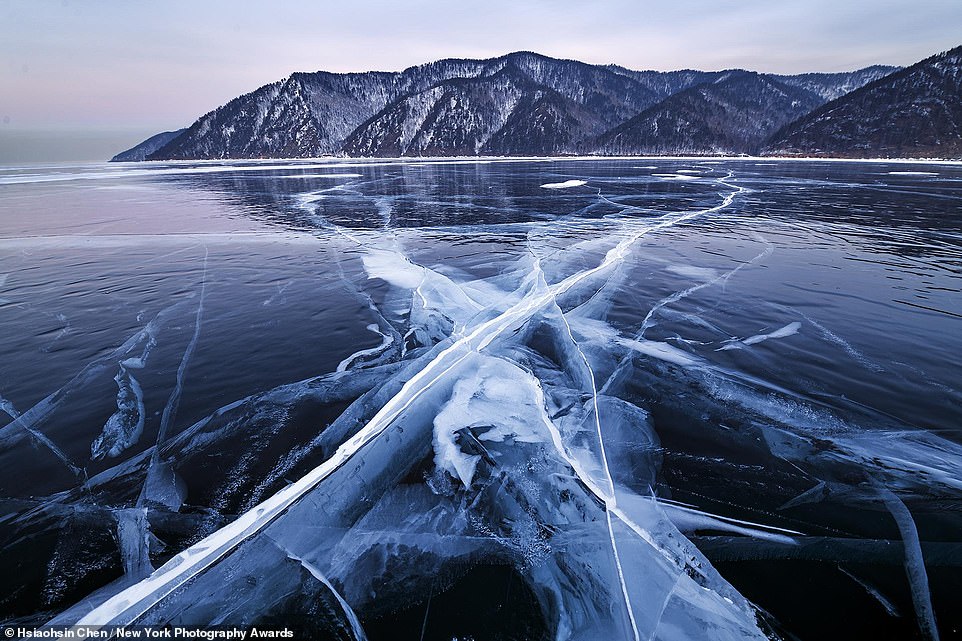 Look above and you’ll see a dramatic shot of Lake Baikal in Russian Siberia. This picture was a runner-up in the ‘Nature Photography – Landscapes’ category and was snared by Taiwanese photographer Hsiaohsin Chen, who took a hovercraft on the frozen lake to explore its ‘amazing and unforgettable natural beauty’. He says that he ‘worked hard to photograph the beautiful scenery’ of the area while enduring the ‘severe cold of minus 40 degrees or even minus 50 degrees Celsius.’ Chen notes: ‘Although it was very hard work, it was extremely satisfying to be able to shoot beautiful images’ 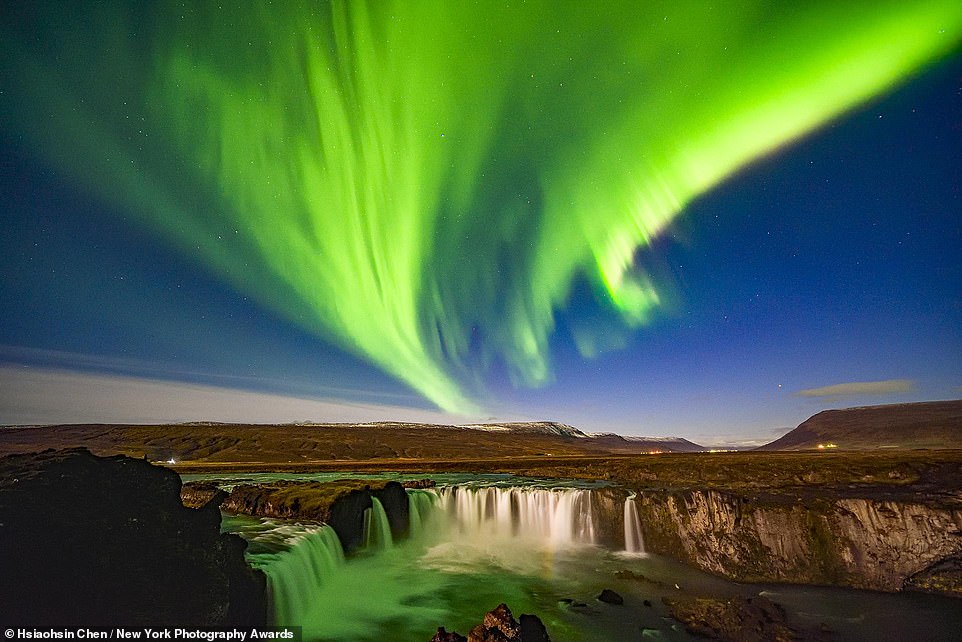 Chen is also responsible for this wonderful shot, which was captured in Iceland. It was a runner-up in the ‘Fine Art Photography – Night’ category. He recalls that when the Northern Lights ‘burst’, the ‘aurora was very active and the light track was flying unpredictably’ 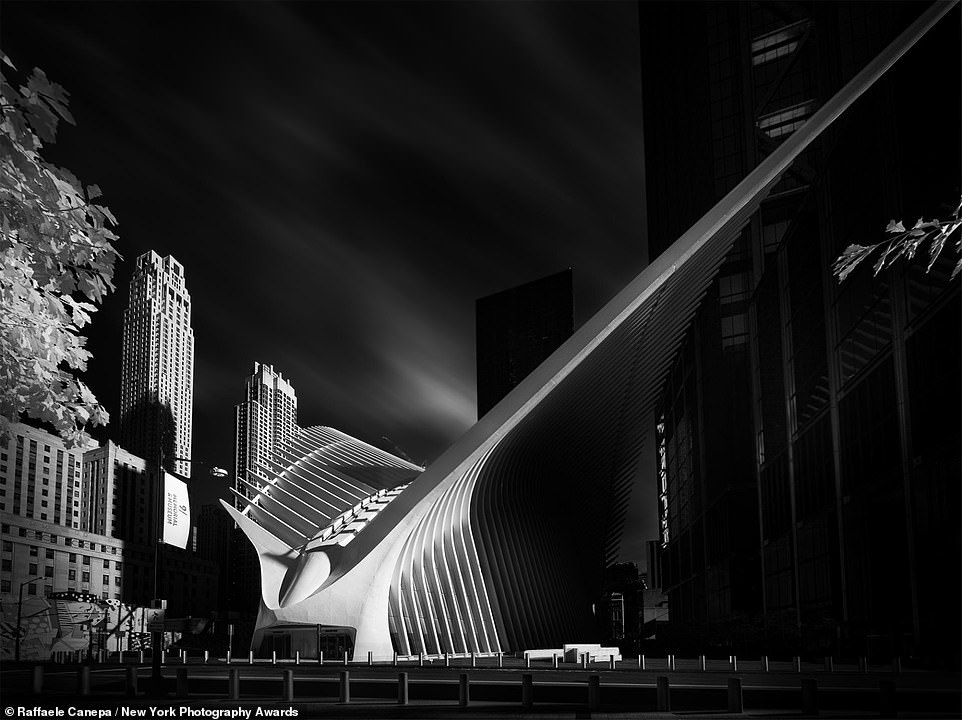 Behold, a photograph by the New York Photography Awards’ Professional Photographer of the Year, Raffaele Canepa. This is one shot from his winning ‘Invisible Light of NYC’ photography series and shows the Oculus, a shopping mall and a transport hub that serves One World Trade in New York. He set out to capture ‘the world’s most iconic buildings and landmarks’, and adds that the ‘absolute lack of human presence’ helps to create a ‘time-suspended atmosphere’ in each shot