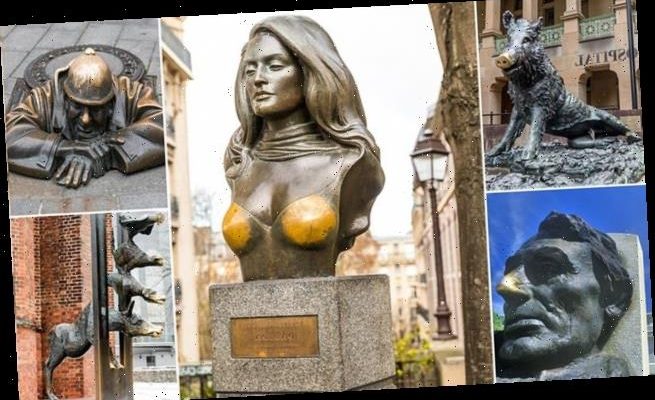 From bronze breasts in Paris to Lincoln’s nose in Illinois: Fifteen statues and sculptures around the world that it’s said will bring good fortune if touched

They say fortune favours the bold.

But they also say that fortune favours anyone who touches any of these statues and sculptures, from Dalida’s breasts to Lincoln’s nose. 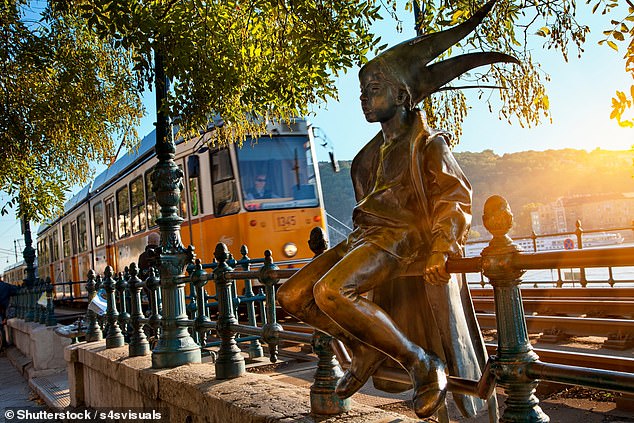 Kiskiralylany, aka The Little Princess, sits on the railings by the tramlines near the Széchenyi Chain Bridge in Budapest

The Little Princess sits on the railings by the tramlines near the Széchenyi Chain Bridge in Budapest.

She’s the creation of sculptor László Marton, who was inspired by his daughter’s love for dressing up as a princess, using her bathrobe as a cape and a newspaper crown.

Since the statue was put up in the 1990s, it’s become a tradition for passers-by to rub its knees for good luck. 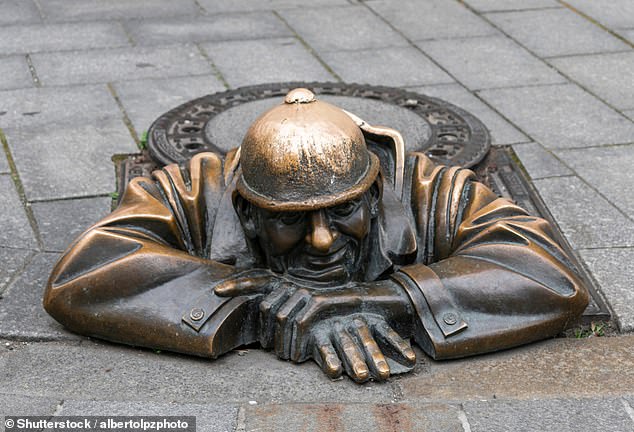 You’ll find Cumil emerging from a manhole cover on the corner of Laurinská and Panská street in Bratislava’s Old Town with a cheeky smile on his face.

The statue was planted into the pavement in 1997 as part of a regeneration project and locals disagree on whether Cumil is taking a break from work or looking up women’s skirts.

Local legend says that wishes made when touching the top of his hat will come true. 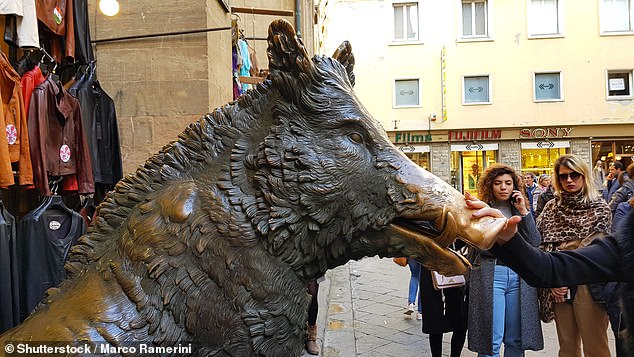 Il Porcellino – meaning ‘piglet’ –  in Florence is a two-minute walk from Florence’s Ponte Vecchio bridge. Tourists can throw coins into its mouth to make wishes

Visitors can feed coins into its mouth while making a wish and they’ll collect in its stomach.

The wishing ritual isn’t complete, however, without rubbing the boar’s nose afterwards.

The Monument to the Chimney Sweep, Lviv, Ukraine 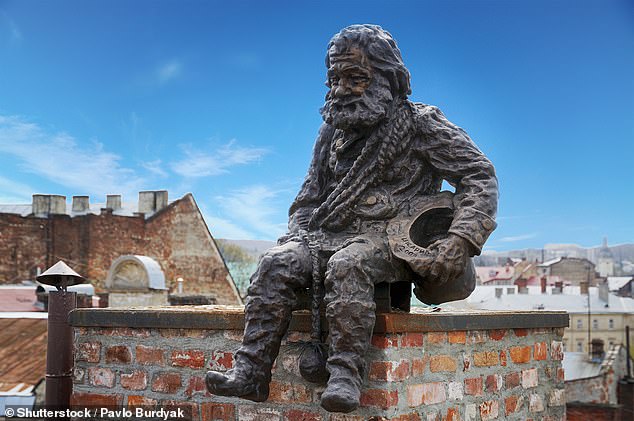 The Monument to the Chimney Sweep can be found on the rooftop of the House of Legends Cafe in Lviv, Ukraine

Lviv’s decorative Monument to the Chimney Sweep makes visitors work for their wishes. First, they have to climb up to the very top floor of The House of Legends cafe.

Once on the roof, there’s another spiral staircase to ascend before they get the opportunity to try and throw a coin into its hat for good luck.

Most people miss, and visitors on the rooftop below can sometimes get caught in a rainstorm of Ukrainian hryvnia as they make their way up for a chance to wish. 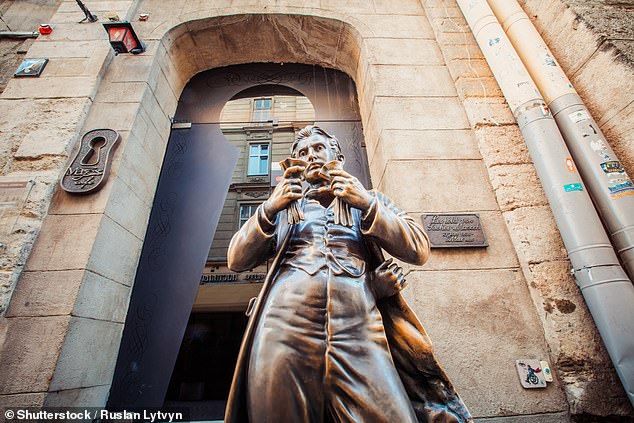 Leopold von Sacher-Masoch is credited with being the founder of the S&M movement and his statue is outside the Masoch cocktail bar on Serbska Street in Lviv Old Town.

Visitors can pop their hand into his pocket to wish for luck. Be warned, though, the pocket isn’t empty… you’ll be feeling the statue’s ‘private parts’.

After making their wish, most visitors head into the S&M-themed Masoch bar. Don’t worry, the S&M part is a gimmick to entertain tourists and not meant to be taken seriously.

Some visitors order a little ‘light whipping’ from a barmaid to accompany their cocktails, but it’s just a bit of fun.

The statue of Dalida, Paris, France 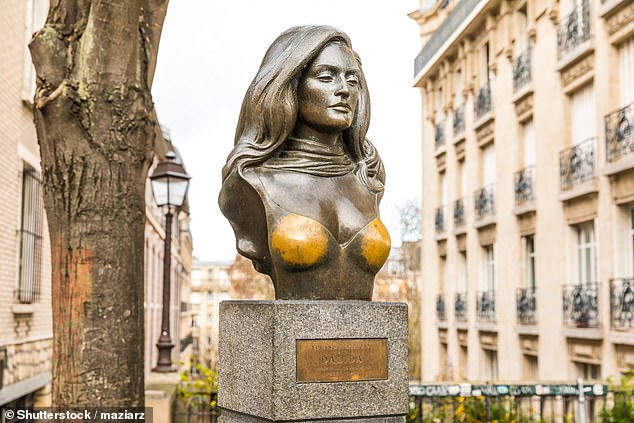 Located in Place Dalida in Paris’s Montmartre district, the bust of Dalida is a memorial to the French singer

Located in Place Dalida in Paris’s Montmartre district, the bust of Dalida is a memorial to French singer and actress Iolanda Cristina Gigliotti, who was known professionally as Dalida.

Selling more than 170million albums and singles worldwide, she was a sweetheart of the city of Paris.

She committed suicide in 1987 and the statue was erected on the 10th anniversary of her death.

Tradition says that touching her breasts will bring luck. 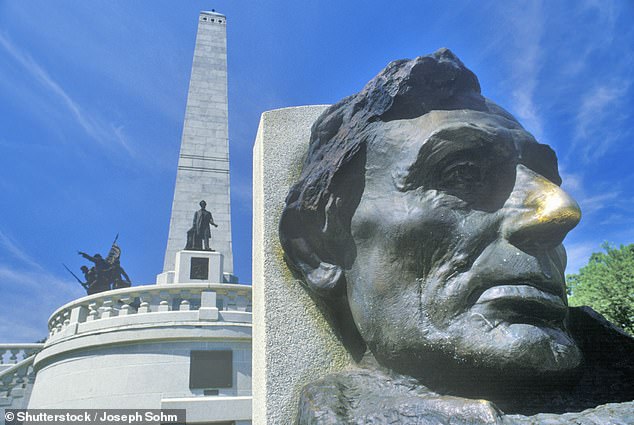 The president’s characterful nose shines gold thanks to years of rubbing by visitors.

Some locals say that rubbing the nose will bring luck but others say it will bring wisdom. 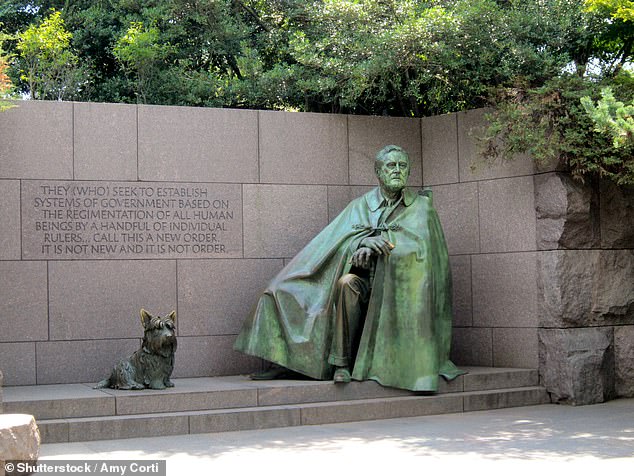 The statue of terrier Fala, on the site of the Franklin D Roosevelt Memorial in Washington DC, is said to have a lucky nose and ears

The Scottish terrier Fala was the dog of US president Franklin D Roosevelt.

A life-sized statue of Fala sits faithfully at his master’s feet inside the sweeping Franklin D Roosevelt Memorial in Washington DC.

Some say rubbing its nose will bring good luck, others suggest it’s his ears that bring fortune. Rub both to be on the safe side. 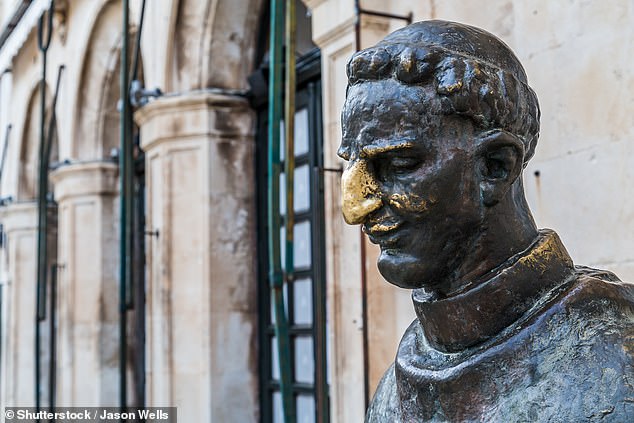 There’s a statue of him across the street from the Church of Saint Blaise, close to the Rector’s Palace in Dubrovnik’s red-roofed Old Town. 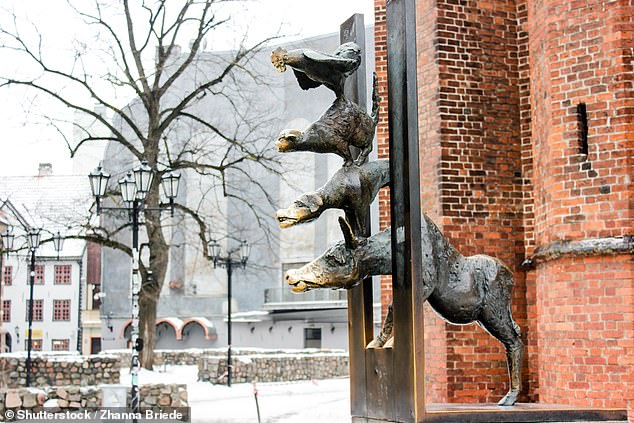 The statue of the Bremen Town Musicians is on Skārņu Street between St. Peter’s Church and the Convent Yard in Riga

It’s not immediately clear why the Bremen Musicians statue is so-named. The statue shows a cockerel perching on a cat standing on a dog balancing on a donkey.

The statue was inspired by the Brothers Grimm fable that told the story of four mistreated animals who ran away to become musicians. Its sculptor meant it to have political undertones.

It’s considered good luck to rub the noses or beak of each of the four musicians.

The statue is located on Skārņu Street between St. Peter’s Church and the Convent Yard. 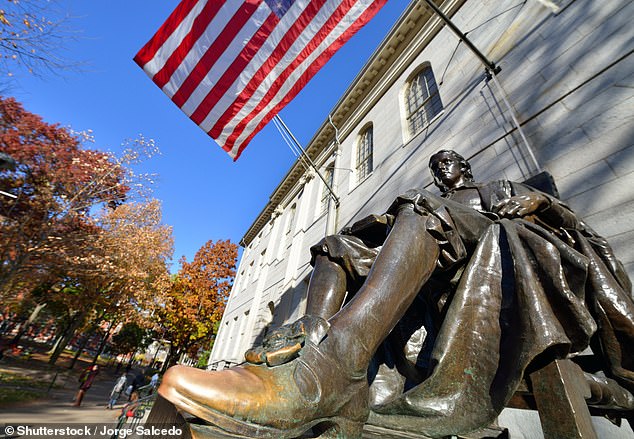 Rabbits’ feet aren’t the only lucky feet in the world. At Harvard University there’s a statue of its namesake and co-founder, English minister and scholar John Harvard, that’s said to have a lucky left foot.

Students rub its boot to bring them good luck in exams.

The statue is located in Harvard Yard, which is thought to be the oldest part of the elite university. 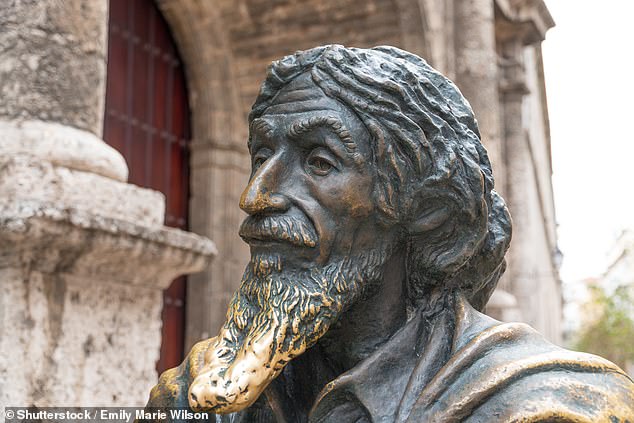 El Caballero de Paris, aka the Monument to the Street Person, is in the Old Town in Havana, Cuba

Visit Havana’s Old Town at peak times and it’s easy to miss the Monument to the Street person.

This bronze statue of a walking man gets lost among the crowds of tourists, performance artists and street food vendors selling items like ice cream in coconut husks.

The statue itself is said to be inspired by a man named José María López Lledín, aka The Gentleman of Paris, who was a common feature on the streets of Havana in the late 20th century.

Myth has it that if you touch his beard and make a wish, your wish will come true. 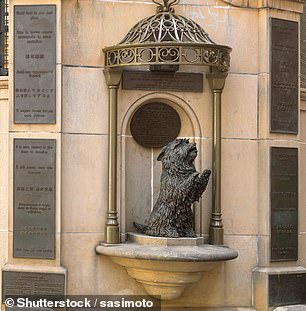 This 60-centimetre-tall bronze is a replica of Queen Victoria’s pet Cairn terrier Islay and it’s located on top of a sandstone wishing well outside the Queen Victoria Building on George St in Sydney.

What makes this statue stand out from others around the world is that it talks. A recording of the dog asking for money is played at regular intervals through loudspeakers nearby.

Those who donate are said to be rewarded by a wish come true. 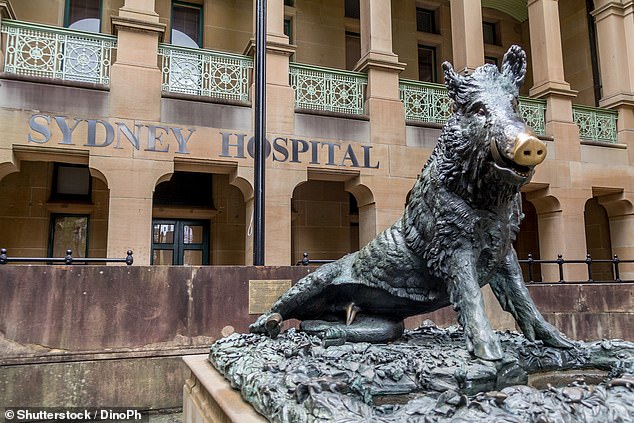 The statue of Il Porcellino outside Sydney Hospital is a replica of the wishing statue in Florence, Italy

This is a replica of the statue and wishing well with the same name in Florence.

Just like its doppelganger in Italy, it eats coins fed to it by wish-making visitors. The money is used to support the hospital. 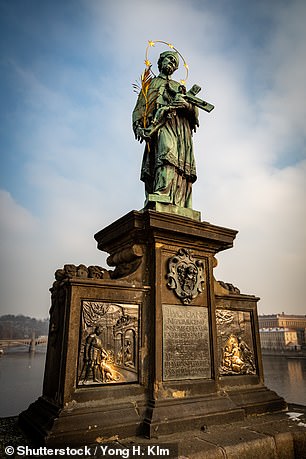 There’s a phalanx of statues on each side of Charles Bridge in Prague, but it’s not always easy to get a clear view of them due to the tide of tourists and the street art and souvenir stands.

There’s one that’s not to be missed, though. The statue of John of Nepomuk is the eighth statue on the right as you walk from the Old Town towards Prague Castle.

It marks the spot where Saint John of Nepomuk was thrown off the bridge, and murdered, by order of the king, in the 14th century.

While the location of the statue was anything but good luck for the ill-fated saint, the spot is now said to be a rainbow’s end for visitors.

Touch the plaque on the right-hand side of the statue, make a wish, and it should come true.

Ryan Reynolds and Blake Lively Deeply Regret Their 2012 Plantation Wedding
We and our partners use cookies on this site to improve our service, perform analytics, personalize advertising, measure advertising performance, and remember website preferences.Ok