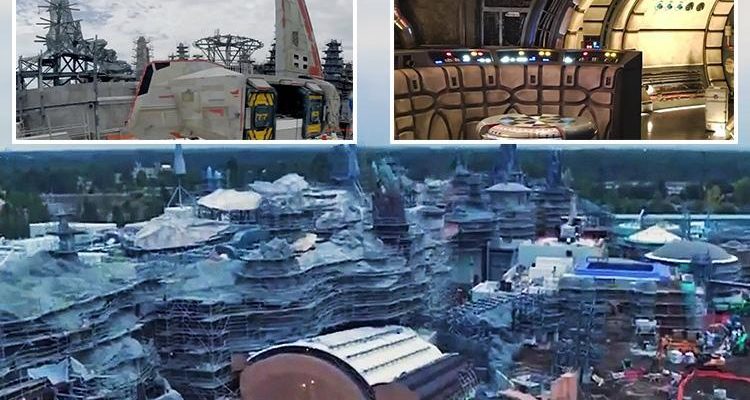 The company has released a video that shows how much of the park has already been built – with the two key attractions already taking shape.

It is currently being recorded at Abbey Road Studios by the London Symphony Orchestra.

Disney has announced that the Star Wars-themed lands will open next summer in California's Disneyland and next autumn at Disney World in Orlando.

The village at the centre of both parks will be called the Black Spire Outpost – an outpost on planet Batuu which sits on the edge of the Outer Rim Territories.

It has become a thriving port for smugglers, rogue traders and adventurers travelling between the frontier and uncharted space.

Here, guests will find themselves in the middle of the action at two signature attractions, one of which lets guests take the controls of Millennium Falcon on a customised secret mission, where they are in charge of flying the ship away from Batuu.

Meanwhile, the second attraction – set partially onboard a First Order spaceship – will put guests in the middle of a huge battle between the First Order and the X-Wing dogfighters.

Unlike other theme parks, a plot line can follow guests throughout their day on the different attractions as the entire park is being created as an immersive theatre experience.

Guests can "build a reputation" at Star Wars Land, so what you do on one ride could affect what happens on others.

It is thought that the Orlando Star Wars land is taking longer to build because of the new Star Wars hotel that is also launching at the site.

The hotel comes in the form of a starship, filled with characters and stories that unfold all around them during their voyage through the galaxy.