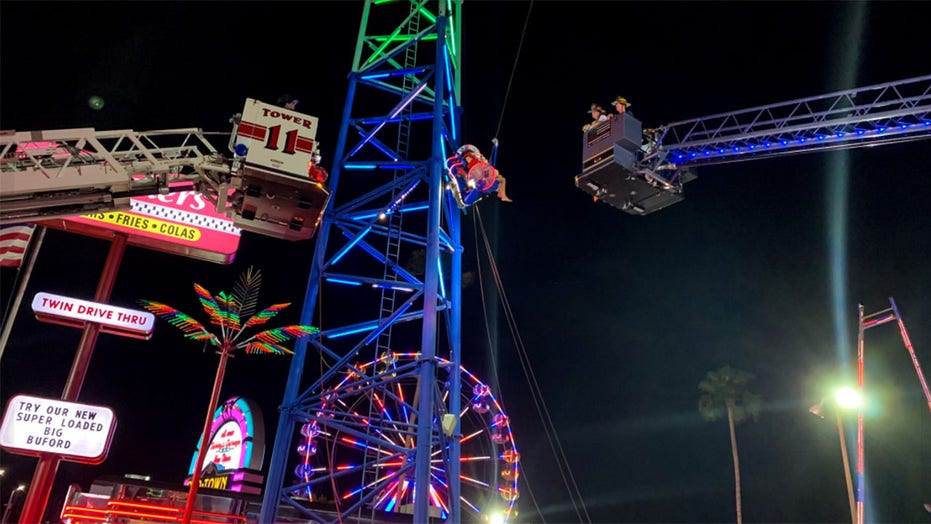 This probably wasn’t the ride these teenagers signed up for.

Authorities in Florida rescued two theme park-goers after a slingshot ride broke down, leaving them suspended over 30-feet in the air.

Fortunately, no one was reportedly injured during the incident.

The Osceola County Fire Rescue and EMS posted about the rescue on its Facebook page, where it confirmed that it worked with the City of Kissimmee Fire Department to rescue the two teenagers.

Photos from the incident show rescue cranes being lifted to the ride’s carriage, which is hanging between 30-40 feet off the ground.

The ride is owned and operated by Old Town Slingshot and is part of the Old Town theme park in Kissimmee, Fla.

One of the ride’s non-load-bearing cables snapped while the teens were still in the carriage, Click Orlando reports. According to local investigators, the ride has a safety feature that will not allow it to be lowered if that cable is not functioning, however.

The ride reportedly passed its last inspection, which was carried out on March 19. The company says it does daily inspections of its rides as well.

The director of marketing and sales for Old Town Slingshot, John Stine, told Click Orlando, “The ride is designed with redundancy, so if something like this does happen, it’s very unusual to begin with, but if it does, then we have a backup system and everything went fine. The only unfortunate situation is they were suspended on the ride for a few hours.”

The ride has reportedly been closed for inspection, along with three other slingshot rides in the state.