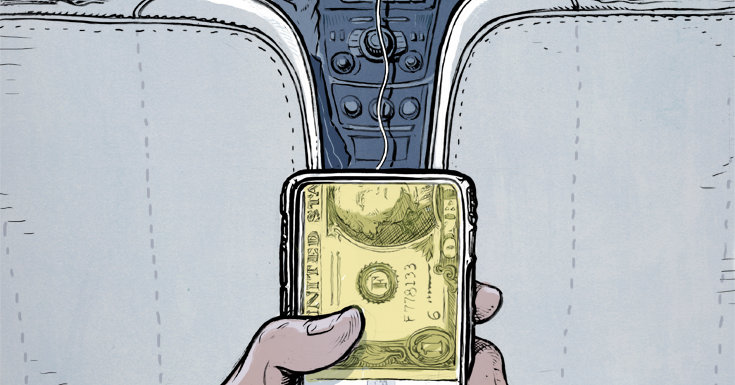 When it launched in 2012, Uber’s original stance on tipping drivers was that it would make using the app more of a hassle for drivers and passengers. “In the end, we decided against including one because we felt it would be better for riders and drivers to know for sure what they would pay or earn on each trip — without the uncertainty of tipping,” the company wrote in a 2016 blog post in response to two class-action lawsuits.

After public pressure and complaints from drivers, Uber ultimately decided to change its policy in July 2017. Competing apps like Lyft had launched by that time with the option built-in, and Via and Juno also allow riders to tip their drivers.

How much should you leave?

Brett Helling is a former Uber driver who now owns and runs Ridester.com, a resource for drivers. Mr. Helling said he tips drivers between 10 and 20 percent the cost of the trip, based on the level of service. Julia Boyd, an international etiquette consultant, agreed. For U.S. rides, she recommends tipping between 15 and 20 percent for exceptional service, 10 to 15 for good service, and 10 percent for average service.

“Many Uber trips can be more expensive than a standard cab. However, a standard cab offers a standard service. Uber drivers will often have exceptionally clean cars and fresh water for their passengers,” Ms. Boyd said.

According to Mr. Helling’s data, passengers who do tip only leave an average of 5.5 percent. The ride-sharing app Via suggests leaving drivers 15 to 20 percent.

Do drivers depend on your tips?

“With fares, tips, and bonuses factored in, I average around $20 an hour and give around 75 rides per week,” said Jon Sycamore, a driver in Salt Lake City who also runs a real estate business. “If you remove tips, it drops to around $15 an hour.” By comparison, Salt Lake City’s living wage is $11.48 an hour for a single adult and $24.12 an hour for a single adult with a child.

Surveying more than 2,600 active Uber drivers, Mr. Helling found that the average median hourly income for UberX drivers, who made up 74.7 percent of respondents, was $13.70 an hour, not including tips. The average was slightly higher for Uber XL drivers, who earned $14.84 an hour.

Mr. Sycamore said he averages $1.26 in tips from Uber riders and 86 cents from Lyft riders. Based on his last 77 rides with each service, less than half of passengers tipped. “Based on our findings, Uber riders are still very set in Uber’s old no-tipping policy,” Mr. Helling said. “Drivers are paying for their own vehicle, which comes with its own slew of expenses. A dollar or two on every ride really adds up, offsetting the high cost of operating the vehicle.”

Why should you tip in the first place?

For Ms. Boyd, it makes sense to tip your driver because they are providing a personal service which involves safety and comfort, and our cultural norm is to tip those who provide this kind of service. She pointed out that this norm will vary in overseas markets. “In Europe the tipping expectations would be lower, and many passengers would simply ’round up’ the bill. And don’t even think about tipping any driver in Japan — that would be considered rude,” she said.

Both Uber and Lyft limit their tip amount to 200 percent. So you wouldn’t be able to leave a $15 tip for your $5 Uber ride if you were feeling extra generous — at least not on the app. The companies put a ceiling on this to keep passengers from accidentally adding an extra zero and overtipping.

Whether you give your driver cash or just tip through the app, they receive 100 percent of the tip; Uber, Lyft, Gett and Via don’t take a cut. Generally, drivers are just happy to get a tip, Mr. Helling said, and many don’t have a preference for cash versus tipping directly in the app. Still, if you have the cash on hand, it can’t hurt to ask.

Correction: 10/3/2018
An earlier version of this article said that Juno passengers could only tip if they gave drivers a five-star rating. Juno changed this policy in September 2016, and now passengers can tip regardless of the rating they give their driver.