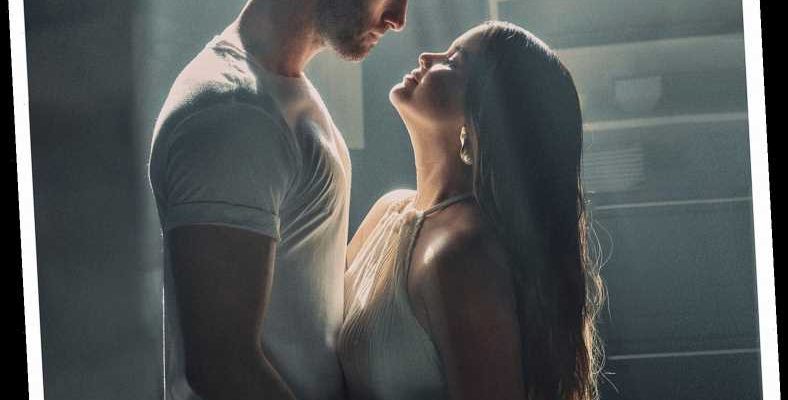 Ryan Hurd and Maren Morris are in perfect harmony.

The country music power couple — who welcomed their son, Hayes Andrew, last March — recently teamed up on Hurd's new single, the duet "Chasing After You" featuring Morris, which they recorded in their basement.

"This song has been something that we've done a couple recordings of over the years and have never released it; we felt like it was time," Hurd, 34, tells PEOPLE. "It's been really cool because I've had a creative relationship with Maren first, and then it became something else. Now to be connected like this, in this way musically, is really special."

Indeed, Hurd and Morris first met in 2013 during a songwriting session in Nashville. They immediately struck up a friendship and began dating for a few years later, before tying the knot in 2018.

Over the years, the pair have continued to collaborate, co-writing songs together (Morris' "Great Ones" and "All My Favorite People" with Brothers Osborne) and providing background vocals for one another (Hurd's "To a T" and "Every Other Memory"). But "Chasing After You" checks another box for Hurd and Morris.

"It's weird to say 'feature' because it's more like a Ryan and Maren song, but this is the first time that we've had it be an official duet," Hurd says. "Right now we're doing a ton of music stuff together, and I really enjoy that. I love whenever I get to work with Maren, however that looks. So no matter what, we are always doing something really special." And that goes for both their professional and personal lives. Hurd and Morris, 30, welcomed baby Hayes as the coronavirus crisis hit the U.S. Both artists would have been on tour the past year, but they instead got to spend quality time at home as a new family of three.

"Music stuff is not the most important thing anymore. The most important thing is obviously our home life and each other and our kid — and music is just our job sometimes," says Hurd, who has written hit songs for Blake Shelton, Lady A and many more. "It comes third, but it doesn't mean it's not important; it just means that the other stuff is always going to be first."

Hurd adds that Hayes has brought some perspective and levity during a difficult time.

"It's been really cool to have a kid thrown in the mix just because that guy doesn't know anything about what I do and doesn't care. He knows there's a piano in our basement that he likes to bang on because it makes noise," he says. "It's just been a really amazing year to be able to be home. I soak up every second of it with him because I know it's not going to be like that forever."

"He's really fun right before he goes to bed, so we always enjoy his last gasp of energy where he's just kind of a little delirious and trying to get it all out and he's really smiley. That's my favorite time of the day with him," Hurd says. "He's almost standing. He doesn't ever like to sit still right now, so we're always chasing him around while he's crawling and keeping his fingers out of light sockets and whatnot. But yeah, he's just a really great little kid and it's been awesome to see every little step of his growth. But I will always just cherish this year for that reason."

Still, Hurd admits he's experienced pandemic fatigue, like so many.

"It's been a long year, and I think it at one point, you're always like, 'Am I going to keep doing this thing?' There was that moment where it was like, 'We'll see if we even keep doing this.' I hit my break at Christmas when I was like, 'I am done with this,'" Hurd says of questioning his future as an artist in country music. With the release of "Chasing After You," though, Hurd has caught a second wind and is looking forward to the future.

"I do feel better. There's some really great music happening. I've got some stuff that I've written for other people that I'm really excited about coming out. I think there is a lot of positivity and inspiration and hope for the next few months, that the touring thing can happen and that people are still going to be making music no matter what, no matter what that looks like," he says. "So from my lowest point til now, I think it's really been a learning process, and now there's a lot to be excited about."