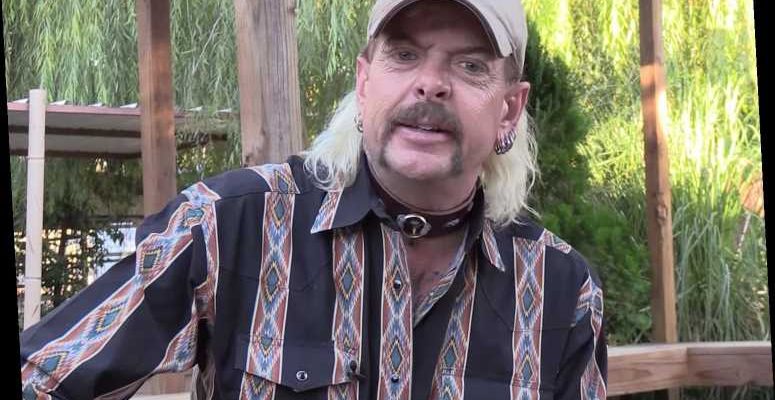 After sharing a few photos of herself with the Tiger King star on Monday, the country singer, 36, explained that she has never visited the G.W. Exotic Animal Memorial Park in Wynnewood, Oklahoma, but instead met the eccentric zookeeper in Texas years ago.

“Backstory: During Hurricane Harvey, the MuttNation Team went to Houston to help relocate existing shelter dogs to free up shelter space for animals separated by their owners,” Lambert shared on Twitter after posting several throwback pics featuring herself and Maldonado-Passage.

“MuttNation asked for volunteers who could transport some dogs from Houston to shelters in Oklahoma, where there was more room and they could be treated and adopted,” she continued. “Some guy named Joe volunteered his trailer and staff. Now I know it’s ‘Joe Exotic.'”

“I’ve never been to his zoo and I didn’t even know he had tigers,” she concluded, adding, “OBVIOUSLY I’d never condone animals being treated badly.”

Lambert is a well-known animal lover and not only keeps several animals on her farm near Nashville, but is also the founder of the MuttNation Foundation, which she launched in 2009 with her mom to “promote and facilitate the adoption of shelter pets.”

Maldonado-Passage has been accused of abusing the animals at his zoo after he was launched into the spotlight with the release of Netflix’s docuseries Tiger King last month.

Kelci “Saff” Saffrey, a handler at the zoo, told PEOPLE on Friday that there was no animal abuse while Maldonado-Passage was in charge.

“When Joe was there, or when Joe was not there, the handlers were the ones directly in contact with every animal,” Saffrey said. “So I know there wasn’t any abuse going on, you know, not on our part. But it’s a relevant term, you know? Anyone can say it’s abuse if it’s not what they agree with. If they believe the cage was too small, then it’s animal abuse.” Maldonado-Passage is currently serving a 22-year sentence at the Grady County Jail in Oklahoma after being found guilty in 2019 for paying Allen Glover $3,000 to kill Carole Baskin, his rival and founder of the Big Cat Rescue.

Joe was also found guilty of killing tigers to make room for more big cats at his exotic animal park in Oklahoma.

He recently filed a lawsuit against various government agencies, as well as a former business partner, seeking $94 million in damages.

He has said that he is “ashamed” of the conditions in which he kept the animals at his zoo.

“Go sit in a cage with your animals for a week,” Maldonado-Passage said in a jailhouse interview with Netflix on March 22. “I mean, when I left the zoo and I sent my chimpanzees to the sanctuary in Florida and imagined what my chimpanzees went through for 18 years, I’m ashamed of myself.”