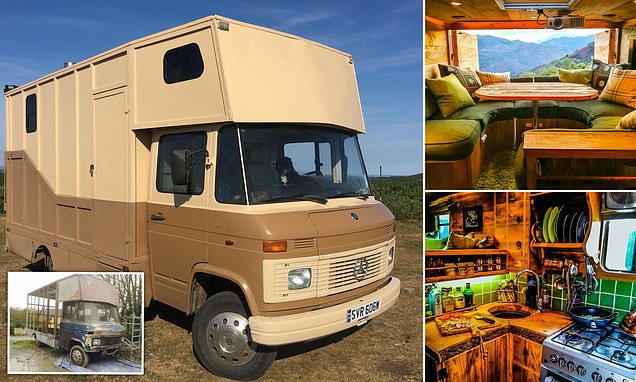 ‘People used to call you a crusty if you lived in a van, now it’s cool’: Former surveyor spends £15k converting a wrecked horse box into a plush ‘log cabin’ home to travel the world in

An ex-surveyor who was sick of the rat race has spent £15,000 converting a former horse box into a plush ‘log cabin van’ to live in.

And now Guy Williams, 39, is travelling the world inside the vehicle, spending less than the cost of buying a London parking space. 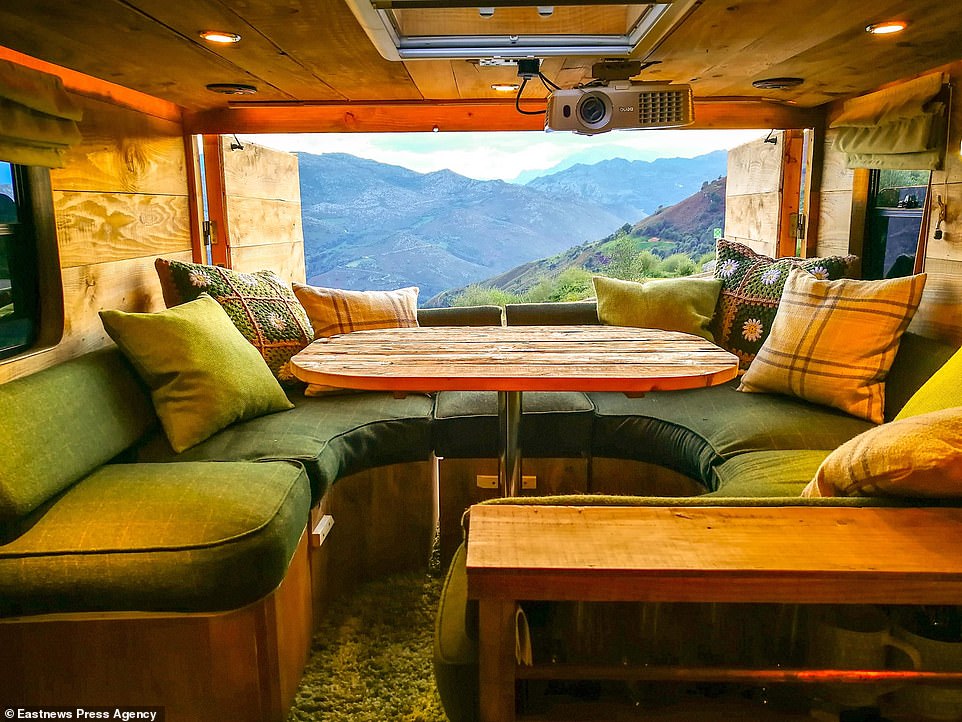 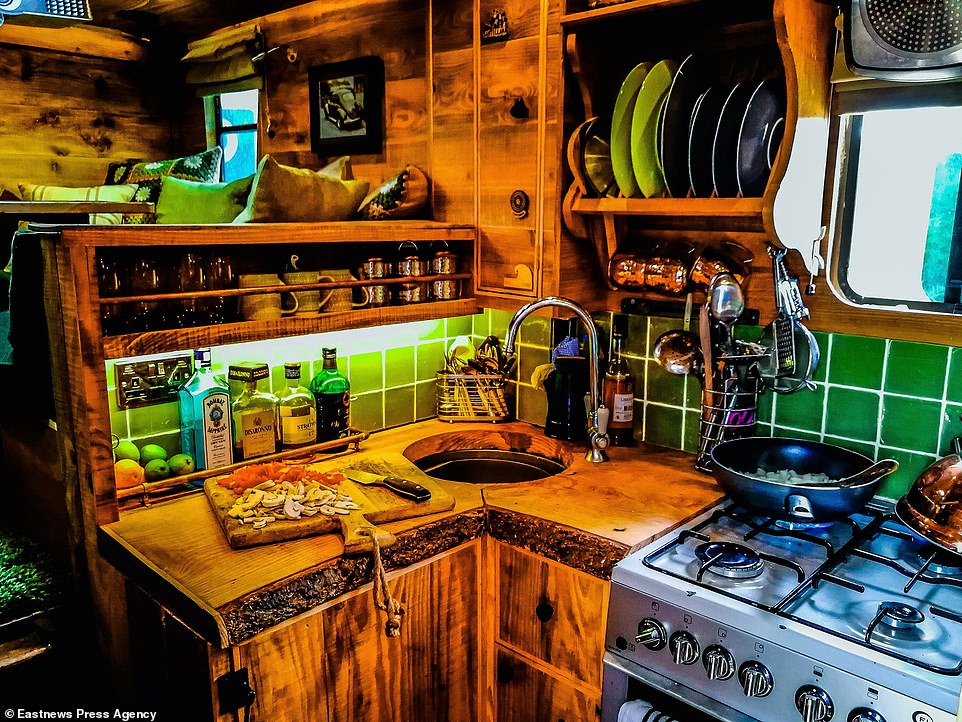 Mr Williams is now living in the van and is travelling around Europe. Pictured is the kitchen, which has a full sized cooker and a spacious fridge Mr Williams has spent a total of £15,000 converting the horse box into a home. He undertook the project after becoming disaffected with his former career

Incredibly the stunning mobile home also has all mod cons – with an indoor cinema, full-size cooker, shower, spacious fridge and a fully-upholstered sofa.

Mr Williams hit the road after becoming disaffected with a 10-year career in surveying before he moved into hotel management.

After a pay-out from his last job he bought and converted the van in just a year and is now travelling across Europe with his six-month-old cockapoo puppy, Ethel.

Mr Williams, who is currently in Portugal, said: ‘Basically I was sick of it.

‘I used to be a charted surveyor in Bristol and I quit that because I didn’t want to be in a nine-to-five everyday until I was 70.

‘I looked around me and all the people there were rotting behind their desks. 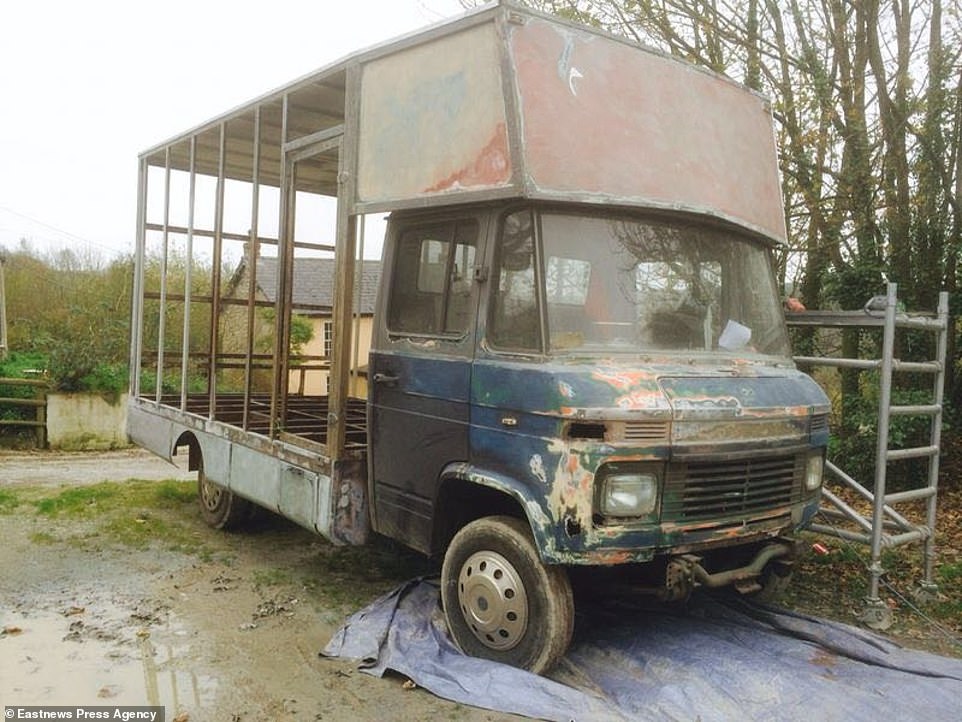 Mr Williams used a pay-out from a previous job to buy the vehicle and carry out the transformation. Pictured is the van when Mr Williams bought it ‘I left and I started living in my other van and rented out my flat in Bristol and I was earning more money doing that than I was surveying.’

He added: ‘After doing that for a while I wanted to do something a bit bigger and I ended up buying this horse box from Holland and driving it back.

‘I kitted it out with the intention of living in it. I did it over a year but I reckon I could’ve done it in just two months.

‘We were going for a log-cabin style and we were inspired by the Alps – it is basically a log cabin in a van.

‘It is more kitted out than a lot of flats, it has everything I need. 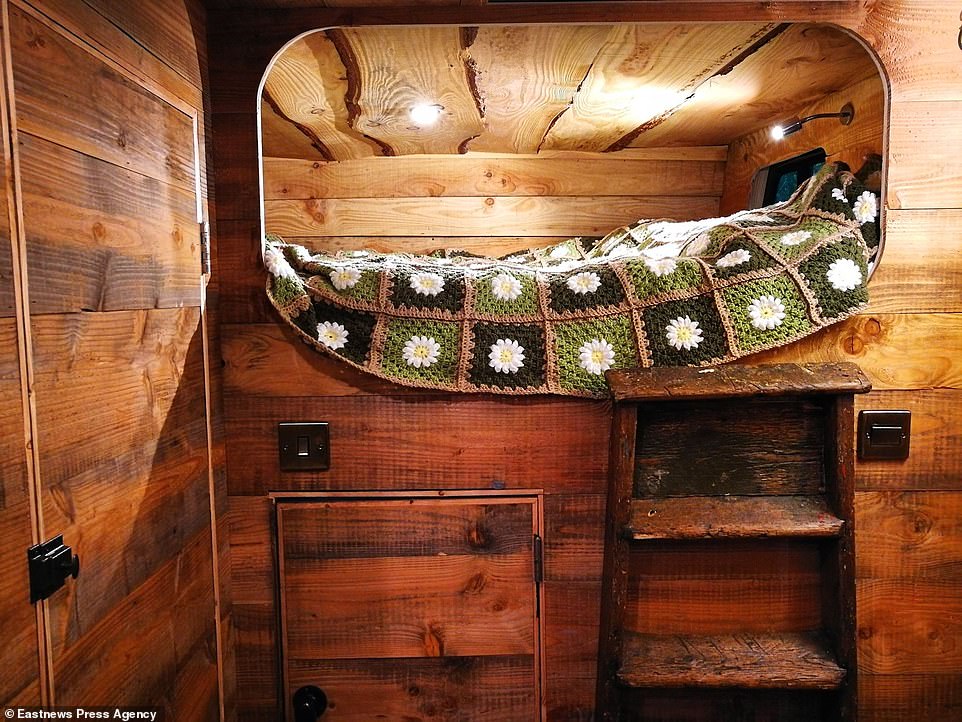 Mr Williams said: ‘Back in the day people would call you a crusty if you live in the back of a van and people would look down their noses at you, but now it is cool to live in a van’ 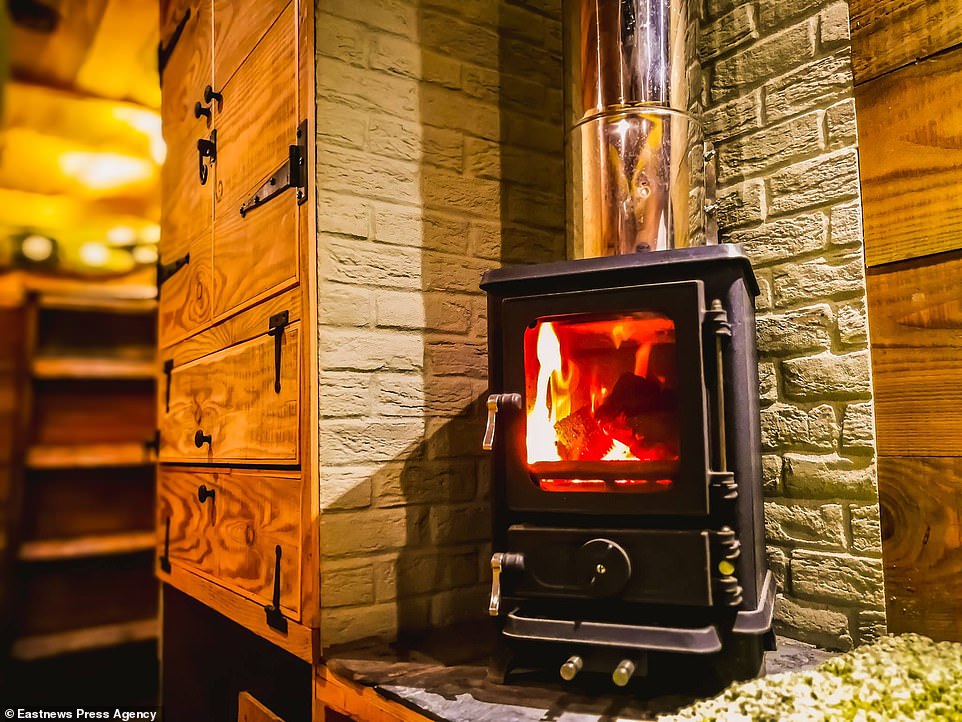 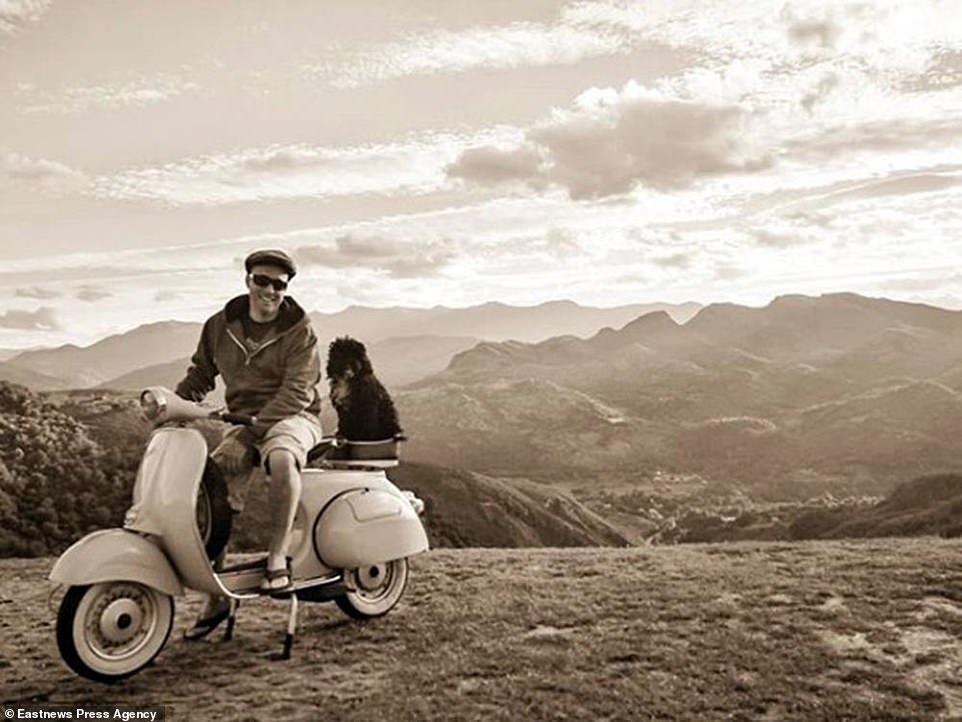 Mr Williams with his cockapoo, Ethel, who is accompanying him on his travels. When his trip is over, the intrepid explorer plans to refurbish vans into homes after his unusual abode sparked interest in the UK

‘You can’t even put a deposit down for that.’

After finishing building the van earlier this year Mr Williams set off in early September – with plans afoot to head to Morocco and finish up by celebrating his birthday in the Alps.

When his trip is over, the intrepid explorer plans to refurbish vans into homes after his unusual abode sparked interest in the UK.

Several conversions have been lined up and he will take them on after returning in the spring.

He added: ‘I’m not doing the conversions to make loads of money I’m doing them because I enjoy it. 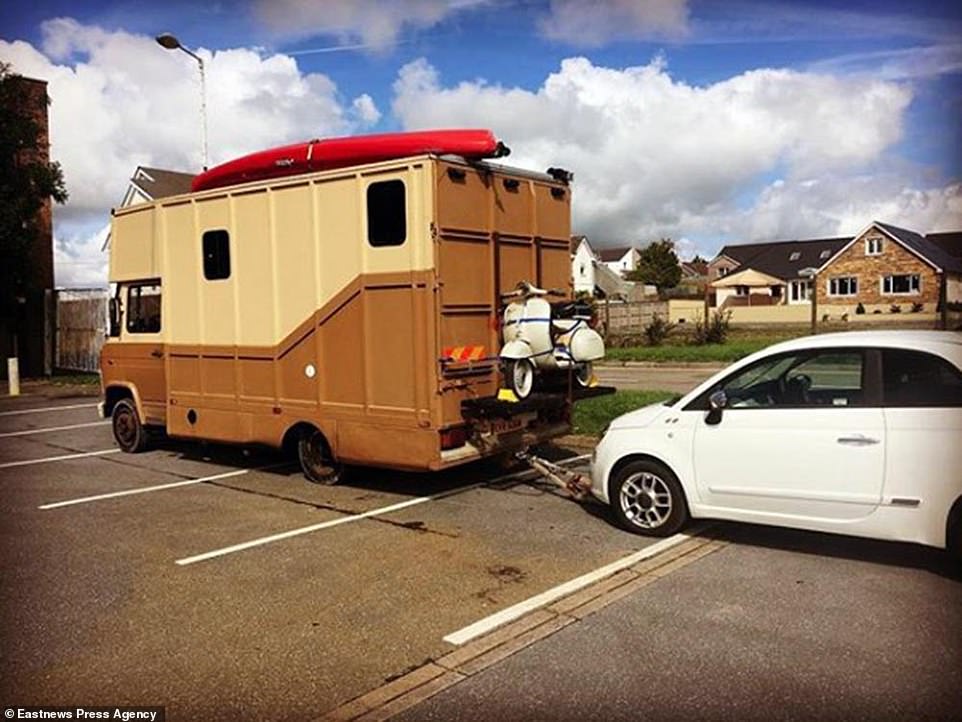 After finishing building the van earlier this year Mr Williams set off in early September. He is currently in Portugal and he plans to travel to Morocco 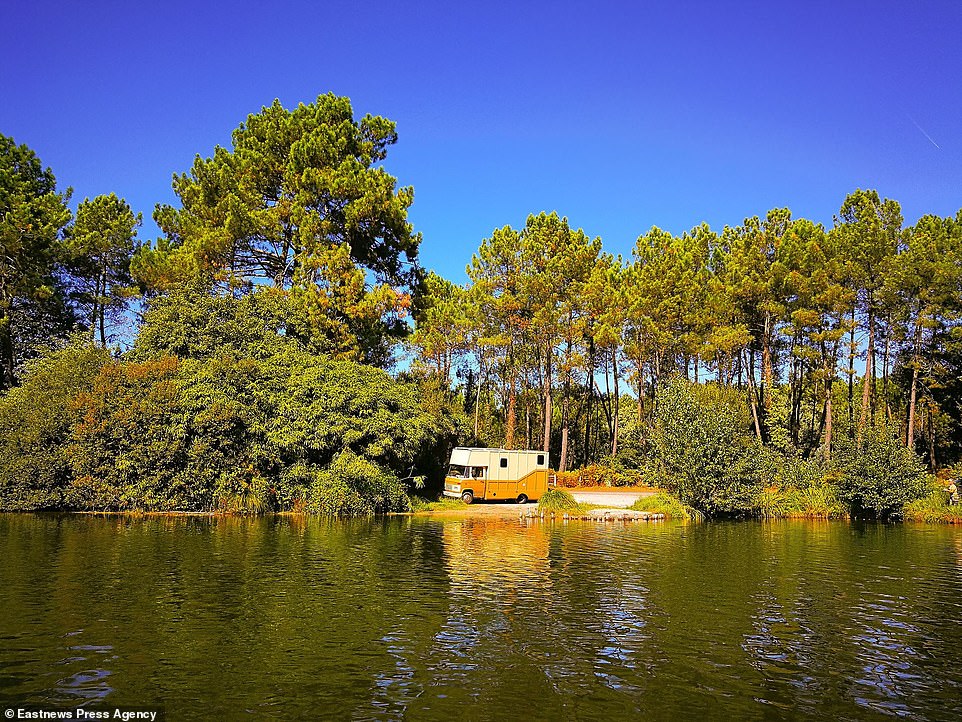 Mr Williams says he is able to park up anywhere and all he needs is fuel and food. Bills aren’t something he needs to worry about

‘Back in the day people would call you a crusty if you live in the back of a van and people would look down their noses at you, but now it is cool to live in a van.

‘It is not mainstream, but it is not to rebel – it is free living and you are off grid.

‘All you need is your fuel and cost of the food, there is no worries of paying bills or a red letter.

‘Van life is so cheap and you have the bonus of being able to go anywhere you want to go and you have everything you need in a box.’