A look at why an Instagram influencer thinks security at the Louvre would not let her inside the iconic gallery.

This is why we can’t have nice things.

On the evening of Friday, March 29, a massive collage was installed around the glass pyramid in the Napoleon Court of the Musée du Louvre. It was a tribute recognizing the 30th anniversary of the museum’s formerly disdained (but now beloved) I.M. Pei-designed structure, the museum’s third most popular work after the Mona Lisa and the Venus de Milo.

By Saturday morning, the homage was destroyed. Some visitors trampled over it with their feet; the paper became unstuck and disintegrated. Other Instagram-minded shutterbugs tore pieces torn off and took them home for souvenirs. 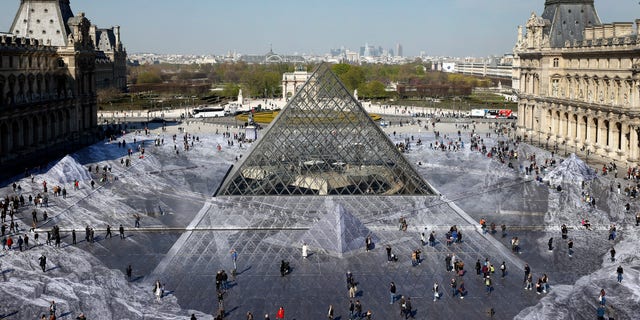 Tourists walk on a giant photographic work by French photographer and artist Jean Rene, known as JR in the main courtyard Cour Napoleon of the Louvre Museum on March 30, 2019 in Paris, France.
(Photo by Chesnot/Getty Images)

For “The Secret of the Great Pyramid,” famed French street artist JR used 2,000 pieces of paper to create an optical illusion of the Louvre’s steel-and-glass pyramid emerging from the abyss of a rock quarry.

It took 400 volunteers four days to assemble the piece, which spanned the 18,000-square-foot plaza. It was JR’s largest work to date.

On Saturday, the artist tweeted a photo of what the work looked like before it was opened to the public. From the perspective of a storeroom on the third floor of the museum, the pyramid seemingly doubles in height.

While onlookers may be distraught of by the turn of events, the artist took it in stride, even seeming to expect it.

He wrote: “The images, like life, are ephemeral. Once pasted, the art piece lives on its own. The sun dries the light glue and with every step, people tear pieces of the fragile paper. The process is all about participation of volunteers, visitors, and souvenir catchers.” 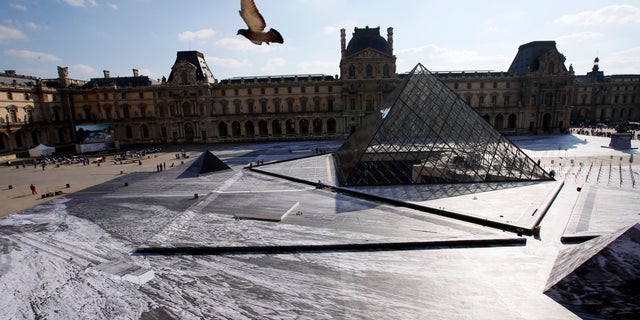 “It is to be expected that it would be damaged, but we did not know how quickly it would happen," a spokesperson for the Louvre told media.
(AP Photo/Francois Mori)

Talking to the Huffington Post, a spokesperson for the Louvre reiterated JR’s sentiments: “It is to be expected that it would be damaged, but we did not know how quickly it would happen.” They added that it was scheduled to be taken down on Monday, April 1, anyway.

This isn’t the first time JR has utilized Pei’s pyramid in his work: In 2016, he covered up the entire landmark with a photo, utilizing the distortion of perspective known as anamorphosis to creating the optical illusion that it had disappeared. This weekend’s short-lived project was dedicated to Agnès Varda, the late influential filmmaker who died last week.

This story was originally published by the New York Post.