Munich has long been known for its embrace of tradition, including Christmas markets, rowdy old-school beer halls and the annual jamboree of drinking, rides and carnival games known as Oktoberfest. Much less has been said about its hip side. (Some, like many Berliners, might ask: “What hip side?”)

But those who want excitement beyond holiday shopping and mugs of hot mulled wine will be drawn in by several projects — including the latest buzzy one by a group of friends turned entrepreneurs who wanted to invigorate Munich’s night life scene.

Alte Utting, a decommissioned, land-bound boat that has been transformed into a bar-slash-event-space-slash-food-market, is the flashiest of their cool-kid projects, and has attracted crowds and lots of attention since opening in July. Built in 1949, Alte Utting was a pleasure boat that sailed for six decades around the Ammersee, a lake about an hour’s drive from Munich. Today, its twinkling lights are easy to spot from afar, since the 120-ft. boat sits atop a bridge that hovers over a quiet stretch of road in southwest Munich. 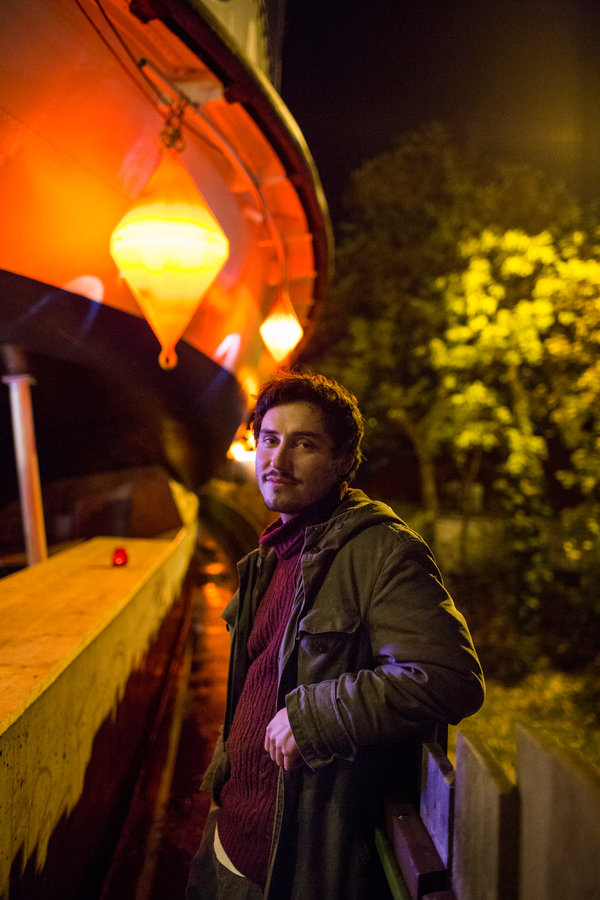 On a recent chilly evening, a woman perched cross-legged on the bow of the boat, clutching a cappuccino and reading a mystery-romance novel. Two older women sat at a table on the open-air deck, flicking through a food menu, while a trio of 20-somethings sipped wine against a backdrop of low-slung houses and train cars.

Daniel Hahn, 28, the mastermind behind Alte Utting and various other cultural projects around Munich, was originally enticed by the boat’s history. “There are so many memories from so many people,” Mr. Hahn said. “People traveled on it, got married on it, celebrated christenings on it.” When Mr. Hahn found out about two years ago that the boat would be destroyed, he decided to give it a second life. “When we bought the ship, everybody said you guys are crazy and dumb, and it’s not possible to bring it here,” Mr. Hahn said.

But he and his friends had a plan. They cut the ship in half horizontally and transported it by night, an operation requiring a police escort. “They closed the autobahn for us,” Mr. Hahn said. When the 144-ton boat arrived at its current spot in Munich 48 hours later, they reattached the two pieces, added a couple of bars, and invited restaurants serving vegan snacks, fusion baos, crepes and vegetable curry to open stands.

Besides Mr. Hahn and his friends’ ventures, Geraldine Knudson, the director of Munich’s tourism board, pointed to several other recently opened venues that are livening up the city’s night scene. The High, a 1980s-Miami-themed bar in the trendy Glockenbach neighborhood, serves experimental cocktails like the Basilisc, with gin, peach, olive oil, lemon and basil. And Cafe Crönlein opened this summer in the Au-Haidhausen neighborhood in a building that used to be a public restroom. The cafe has already attracted a steady stream of visitors with its unusual setting, craft beers, homemade sodas and a weekly outdoor concert series.

Of course, despite its staid reputation, the Bavarian city has always had bars and clubs that deliver both atmosphere and worthy libations. Two are standouts: Zum Wolf, a cocktail bar that opened in 2012 and is styled with date-night lighting and touches of Americana (like a “Bourbon Street” sign hanging over the bar), has a wide range of whiskey and serves a mean old-fashioned.

Over at the Haus der Kunst, a museum of contemporary art that was built in the 1930s to house Nazi propaganda art, Goldene Bar offers an airy space decorated with large-scale prints of antique maps, a patio among neoclassical columns, and cocktails with housemade bitters. After the war, Haus der Kunst served as an officer’s club for members of the U.S. army and began exhibiting nonfascist art as early as 1946. The museum does not have a permanent collection, functioning instead as an exhibition space for rotating art shows.

For his part, Mr. Hahn, who was born and raised in Munich, has been steadily injecting the city with creative energy since 2012, when he and his friends founded Wannda, an event-organizing group. As one of their first projects, the group purchased two circus tents and began taking them to different locations, using them as space to run artistic workshops, holiday markets and more. That project, along with some of those that followed, helped them develop the contacts and bureaucratic know-how to convince the city government to approve of their plan to haul in a boat from the countryside.

“When buildings were taken down, we would use the time between the demolition and the new construction to go to this place and put up a tent,” Mr. Hahn said. “It was legal but so difficult, so much energy and so much time.”

Eventually, they built on the lessons they learned with the tents and constructed Bahnwärter Thiel. The event space, which is around the corner from Alte Utting, spreads out in an abandoned lot. Its indoor areas consist of a stand-alone subway car and several abandoned, graffiti-covered shipping containers, one of which hosts techno parties with a sound and light system that some of the country’s best DJs are more than happy to travel hours for. During nonparty hours, Bahnwärter Thiel hosts flea markets, theatrical performances and exhibitions. Its yard is strewn with a mishmash of furniture — even a lawn mower can be found among the fold-up tables and chairs.

Valeriya Safronova is a reporter for the Style section. She is based in New York. @vsaffron