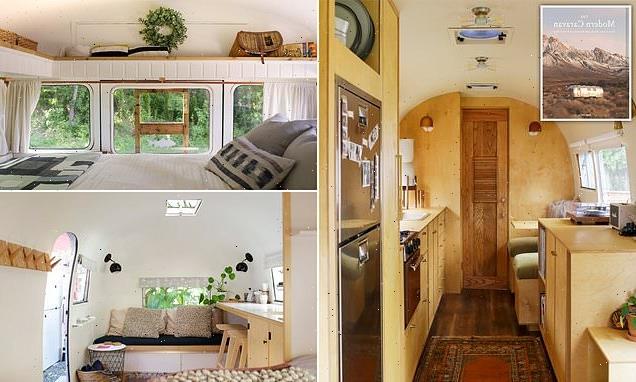 Caravanning at its cosiest has been revealed in a beautiful new coffee-table book.

The Modern Caravan, by U.S-based Kate Oliver, goes through the keyhole of some of the most eye-catching ‘rolling homes’ from around the world.

Packed with stunning pictures, The Modern Caravan hopes to inspire readers with its stories of solo travellers, couples and families who left the daily grind for a life of endless horizons.

There’s a couple who converted a 24ft school bus to explore North America in, a 1962 Airstream caravan that’s been given a ‘lush and ethereal’ makeover and a stunning trailer parked up in the Mojave Desert that has decor inspired by its surrounds and was renovated in just two months for $16,000.

Oliver writes: ‘Their stories are all unique – their individual struggles, their motives, their desires – yet they have one thing in common. The people in these stories have carved out a life for themselves that isn’t prescribed by society.

‘My truest hope for you as you read this book is that you are touched and inspired by the stories of others who have created not only the home they dreamed of but also, most importantly, the life they longed for.’ Scroll down for a preview of the book’s stylish images… 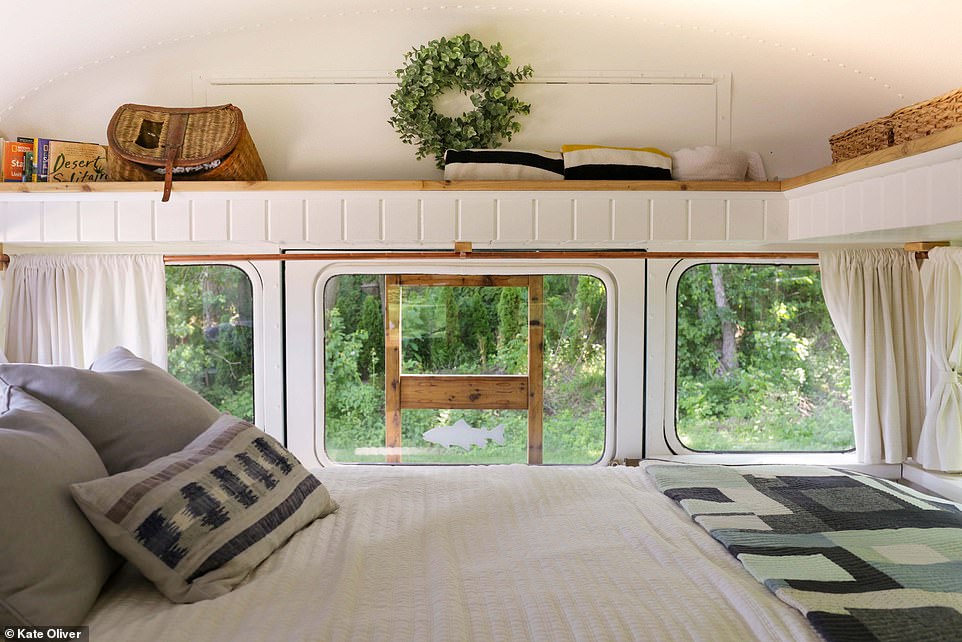 ‘We love that, when we’re living in our bus, we’re more tuned in with nature,’ the owners of the converted 24ft school bus pictured above, Ben and Mande Tucker, tell Oliver. Together with their toddler Sawyer and dog Penny Lane, they are a part-time traveling family, Oliver reveals, choosing to explore North America whenever they get the chance. The couple, from Michigan, spent six months on their project and say they are particularly happy with big elements like their rooftop deck right down to the small details, such as stones gathered from Lake Michigan used as cabinet handles. Follow along – @fernthebus 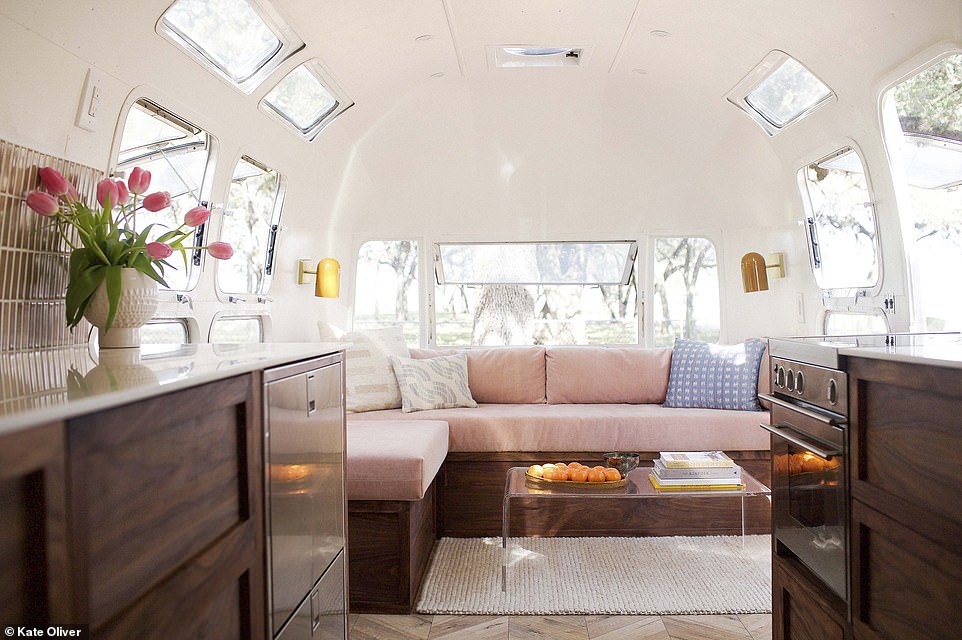 Oliver, the book’s author, and her wife, Ellen Prasse, launched an Airstream renovation business called The Modern Caravan in 2017. Seventies-era Isla, pictured above, was one of their first projects, completed in Texas in February 2018. Oliver writes: ‘I started with a soft pink tone, inspired by a Paloma cocktail, and then filled in the rest, finding a balance between warm, dark wood and light, fresh tones and finishes that had a hint of glamour and modernity. I kept finishes simple throughout, but opted for modern Shaker-style walnut cabinetry, which felt luxe in its lines yet earthy in its simplicity and finish.’ For those wishing to follow in her footsteps, she offers this caveat: ‘Airstream renovation [is] unrelenting work – dirty and backbreaking. There is nothing glamorous about it.’ To follow visit @themoderncaravan 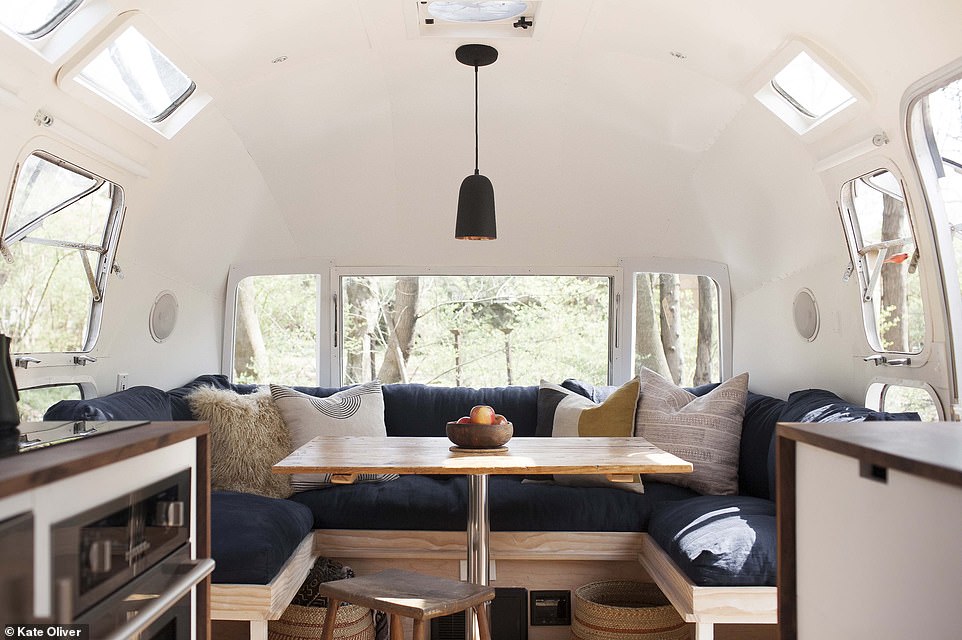 Oliver and Prasse have been on the road with their daughter, Adelaide, for around four years in two Airstreams they renovated – first was ‘Louise’, then one they called ‘June’ (pictured above). Describing the design process for June, Oliver writes: ‘We used white walls to keep the space feeling open and fresh. For countertops and surfaces, we selected walnut for its hardworking capabilities and warm, inviting presence; painted all of the cabinetry white; and created a custom walnut-framed frosted-plexiglass pocket door to divide the space in half. The frosted plexiglass provided privacy for the bedroom while still allowing light to move throughout the kitchen and living space. This door has become our signature and is found in most of our builds’ 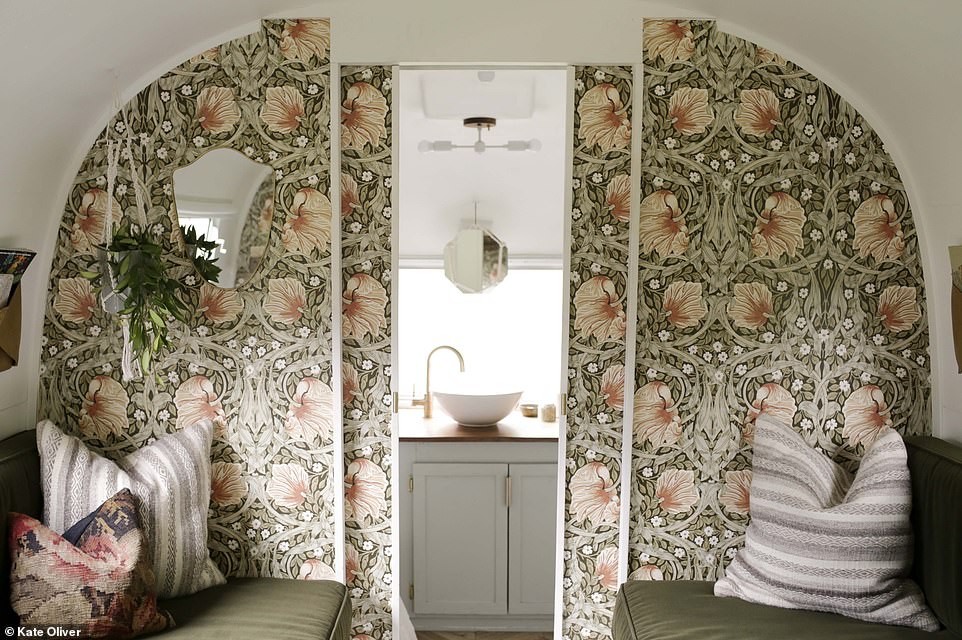 Miss Marjorie, the 1962 Airstream caravan (pictured above), was given a ‘lush and ethereal’ makeover by pattern designer Bonnie Christine, explains the book. Based in North Carolina, the trailer features an airy open layout with full bathroom and bathtub, wardrobes and dining table, we learn. ‘The coffee tastes better, the sunrises shine brighter, and the moments with our children sink in deeper,’ Bonnie says of her adventures in Miss Marjorie. Follow along – @bonniechristine 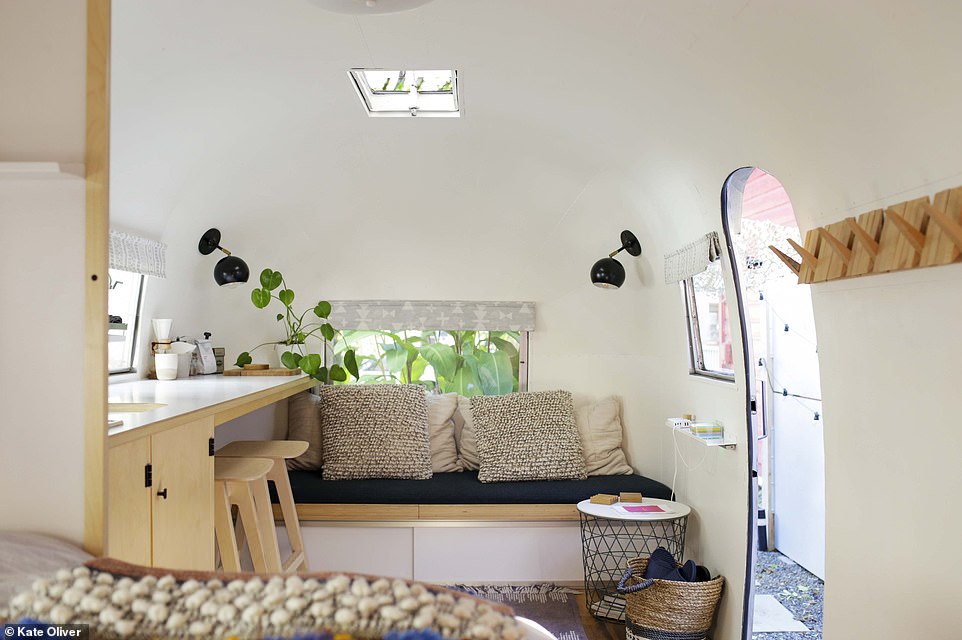 Cynthia Tuan and Shane Beers spent two years and $25,000 (£19,000) doing up this 1958 Airstream caravan. ‘We worked really hard to design an open-space plan and continuous lines from end to end,’ art director Cynthia tells Oliver. There were tough times during the renovation, too, the couple admit: ‘Your strengths and weaknesses, your temperament, your resiliency, your humour… all is revealed.’ Follow along – @silver_sequoia 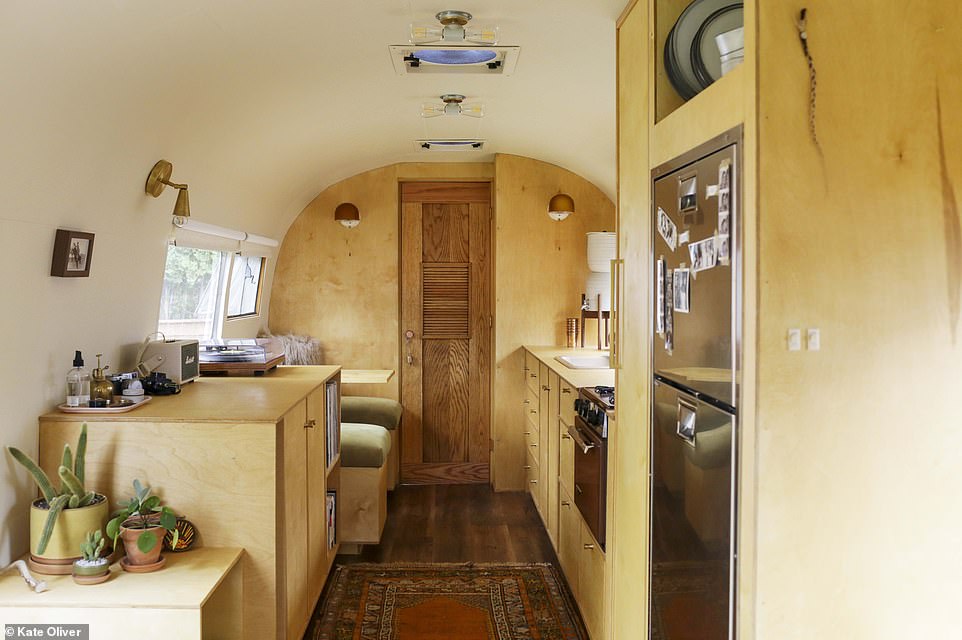 Jenny and Chelsea Wilder dedicated three years to renovating an old Airstream caravan, spending $35,000 (£26,000) in the process, we learn. ‘The colours are warm, inspired by their time spent in the desert after their wedding: rusty oranges, deep reds, rich browns, and dusty greens,’ the book notes. Jenny and Chelsea tell Oliver: ‘We love the honey-stained cabinetry that really conjures up the feeling of mid-century design in our space.’ Follow along – @thewildmothership 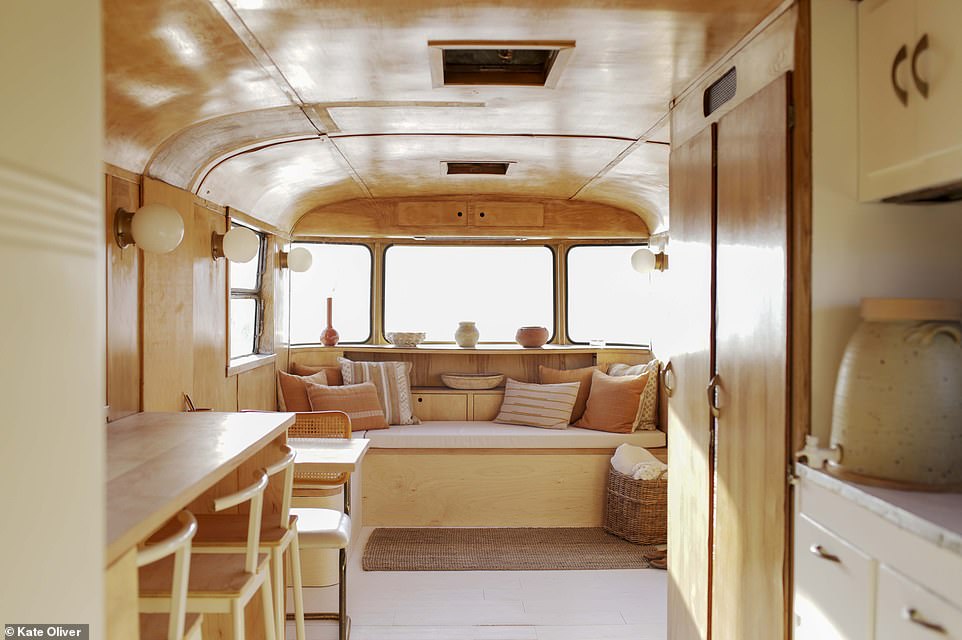 Parked up next to their home in the Mojave Desert, Kelly Brown and Bryce Ehrecke’s 31ft trailer was inspired by wabi-sabi aesthetics, according to the book. The soft, warm tones are inspired by the colours of the desert, we’re told, reflecting the ‘sand and stone, the rusts and golds of dried desert buckwheat, and other desert flora’. By recycling existing kitchen units and buying vintage fixtures, the project was built in just two months on a budget of $16,000 (£12,000), the book reveals. Follow along – @kellybrownphoto and @crenaturalbuilding 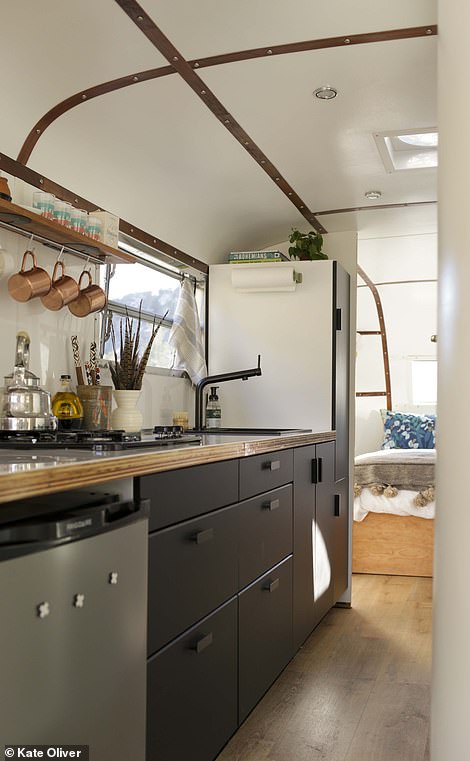 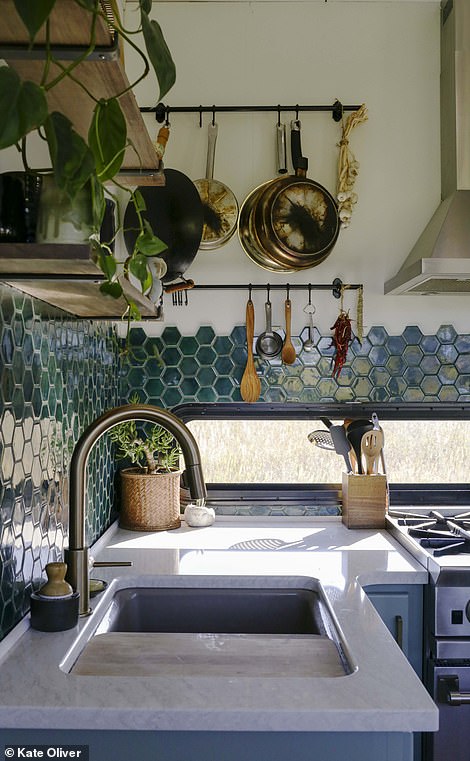 LEFT: Based in Denver, Tracey Gobey and James Grenfell took on the challenge of upgrading an old aluminium Spartan trailer, the book explains, adding that the couple went for bold design choices, from the matte-black sink and faucet in the kitchen and a glossy white countertop to the playful white penny tiles in the bathroom which spell out ‘Get Naked!’ The project cost $25,000 (£19,000). Follow along – @wayfare_ranch. RIGHT: Elsewhere in the tome, Kevin and Mandy Holesh tell of their colourful camper project, which favours bright colours and striking geometric prints. Follow along – @188sqft 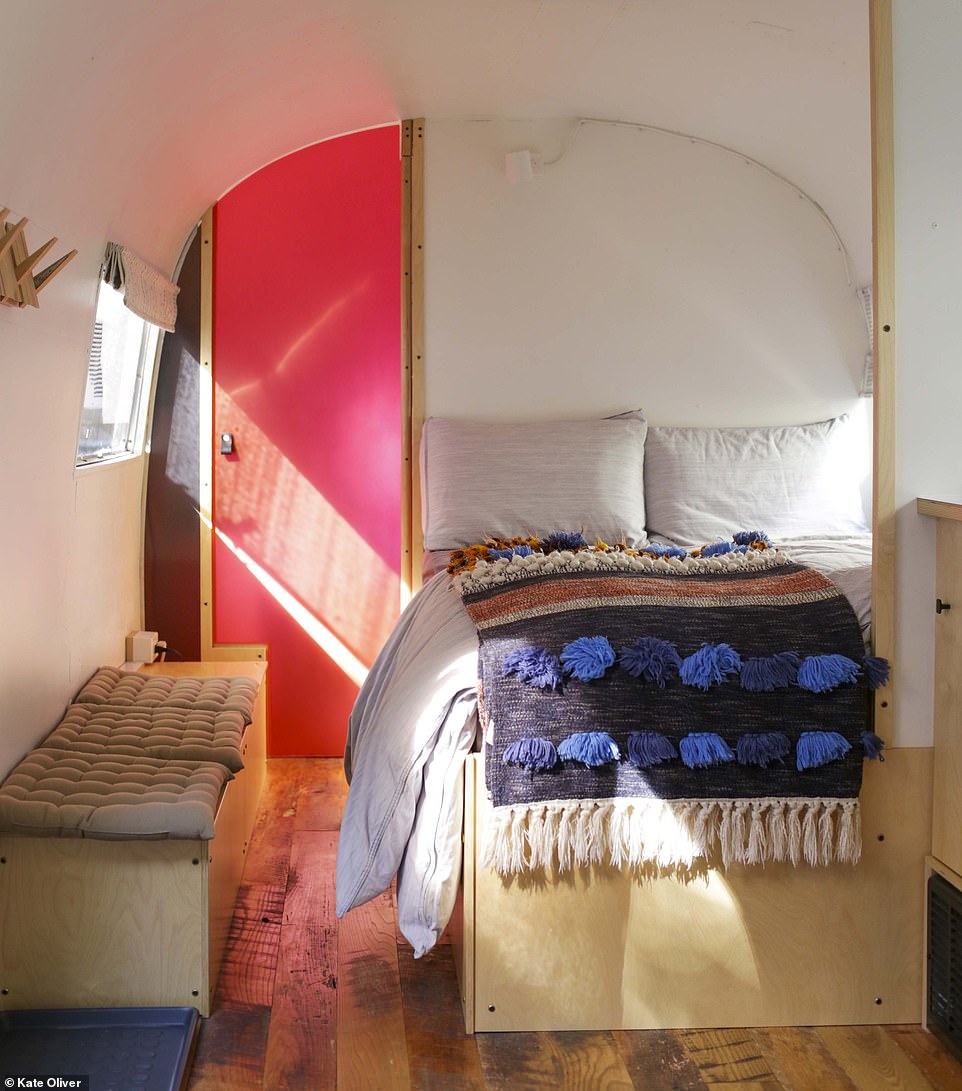 According to author Oliver, the book is dedicated to ‘anyone who longs to create the life they want for themselves and, though afraid and uncertain, goes out and creates it anyway’. Pictured above is the bedroom of Cynthia Tuan and Shane Beers, a two-year renovation project that now sits in the driveway of their home in Portland 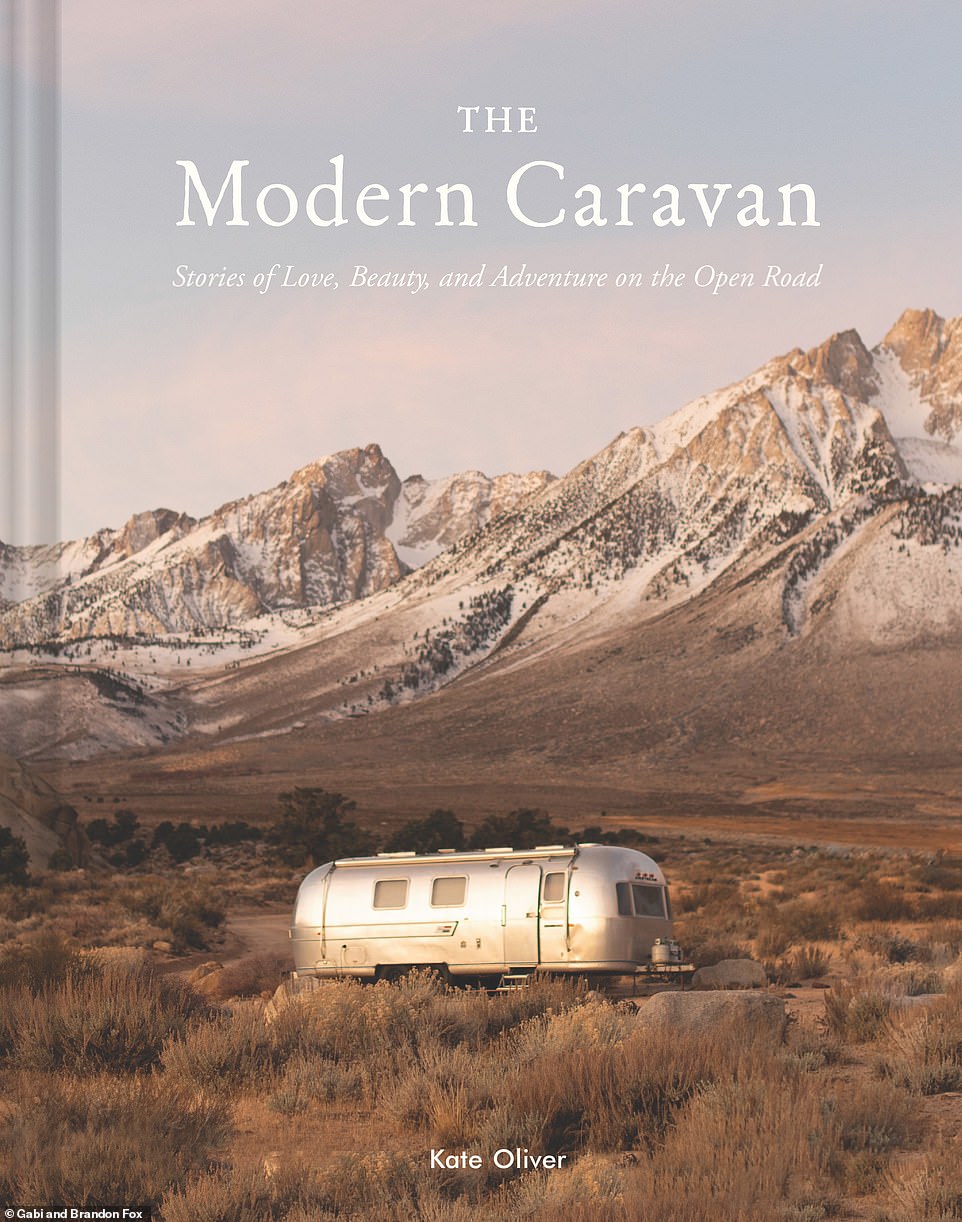