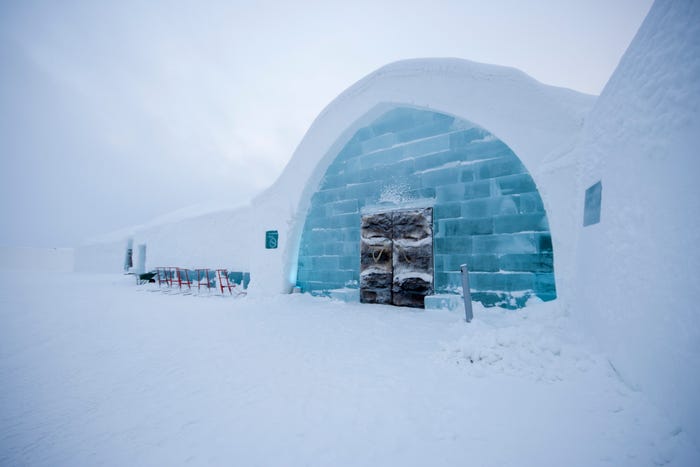 Icehotel Sweden has unveiled the designs for its latest collection of suites made from ice and snow that guests can stay in this winter.

Tucked away in the idyllic town of Jukkasjärvi, 200km above the Arctic Circle in northern Sweden, the hotel originally started as an art gallery in 1989. It quickly became a tourist hotspot that developed into a hotel, now in its 31st year.

The hotel is made up of two sections — the permanent Icehotel 365, consisting of regular "warm" rooms and ice rooms that are open all year round, and Icehotel 31's art suites which are designed by different artists and rebuilt yearly after melting away.

Six new ice suites have been added to the year-round Icehotel 365, as well as 12 temporary new art suites that will be open from December 2020 until April 11, 2021.

Because of the pandemic, the hotel invited only local artists to participate this year, which has been "a wonderful opportunity to showcase Swedish art" for the hotel's creative director Luca Roncoroni.

Travel to Sweden for international travelers, including US citizens, has been temporarily banned until March 31, 2021. According to data from Johns Hopkins University, Sweden has recorded 428,533 coronavirus cases and 8,484 deaths so far.

For guests who cannot travel due to the pandemic, the hotel has also launched an AR tour via its Instagram for virtual visits.

Welcome to what the Icehotel describes as "probably the coldest sauna in the world." 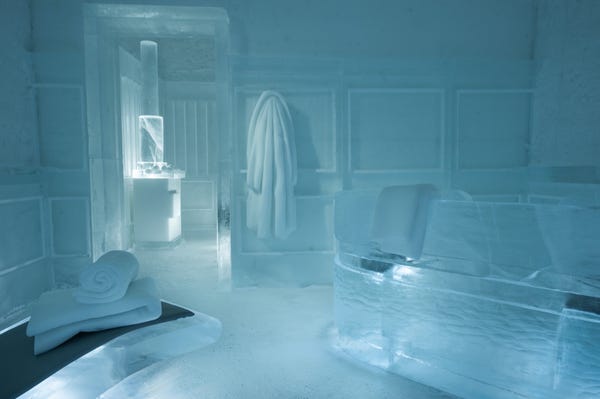 Creative Director of Icehotel and architect Luca Roncoroni said he wanted to create a room that plays with the feelings of warmth against cold temperatures. The suite also includes a bathrobe and towels made from snow, two ice "ovens," and a 631-liter bathtub.

Roncoroni told Insider: "We know that the world is watching from afar, and we hope this all-Swedish creation will send a positive message, a greeting to future artists and guests, while we wait for them to come back to us next year."

Here's a closer look at one of the ice "ovens" in the Sauna suite. 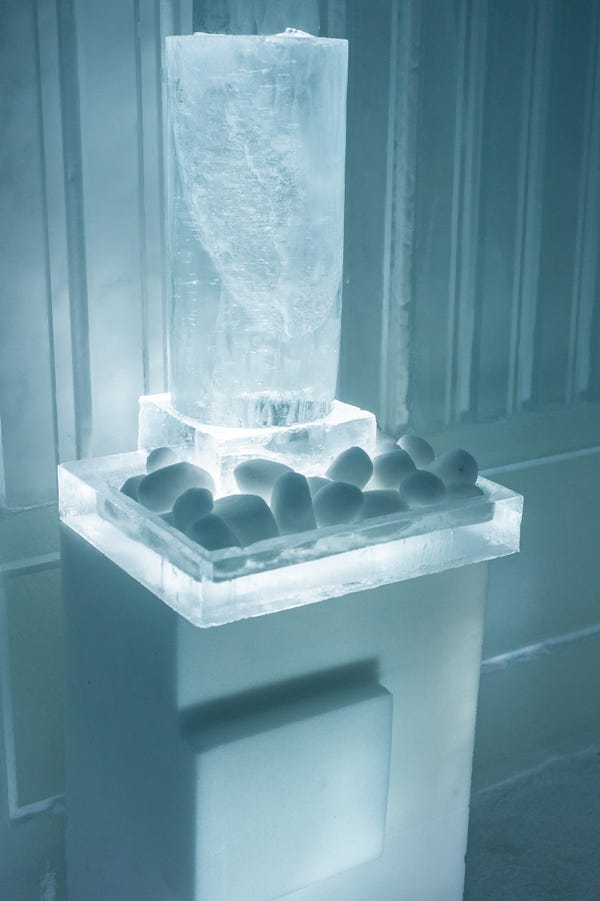 The hotel recommends that guests spend one night in an ice room and a couple of nights in one of its warm rooms. Access to the ice rooms is given at 6 pm, and guests can keep their belongings and freshen up in the heated service building nearby.

There is also an on-site heated sauna located in the hotel's permanent section, Icehotel 365.

Icehotel teamed up with Swedish artists Anna Öhlund and John Pettersson to create the Ceremony Hall Skogen — a frozen forest. 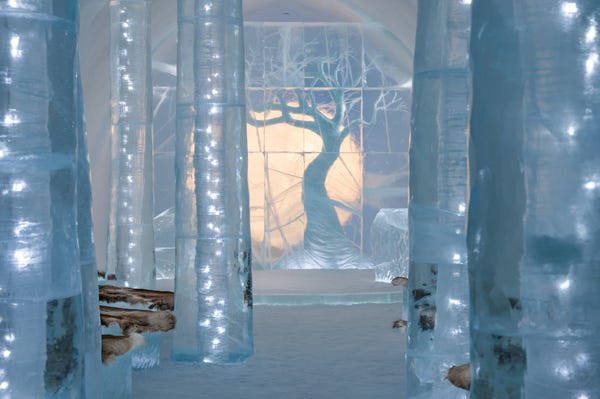 Inspired by the 1980s Japanese practice of Shinrin-Yoku (forest bathing), the temporary Ceremony Hall room was designed to look like an ice forest where guests are surrounded by intricately shaped trees, branches, and leaves.

The space is versatile and can be used for intimate gatherings and celebrations such as weddings.

The Kodex Maximus deluxe suite is one of Icehotel's permanent additions and is designed to feel a little "off-balance" with the aim of invoking contemplation. 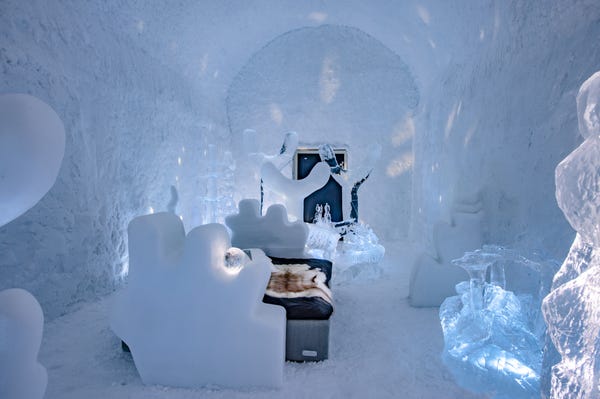 The hotel's website advises its guests to "prepare to lose control" in this room that's designed to give a sense of the surreal for anyone who stays there.

The suite is one of the latest additions to Icehotel 365, which uses solar energy to keep the rooms at 23 degrees Fahrenheit all year round. The hotel is sustainable and sources all of its ice from the Torne River and snow from the surrounding area.

The Toybox deluxe suite instantly transports guests to memories of childhood — there's even a bunny headboard made entirely from snow. 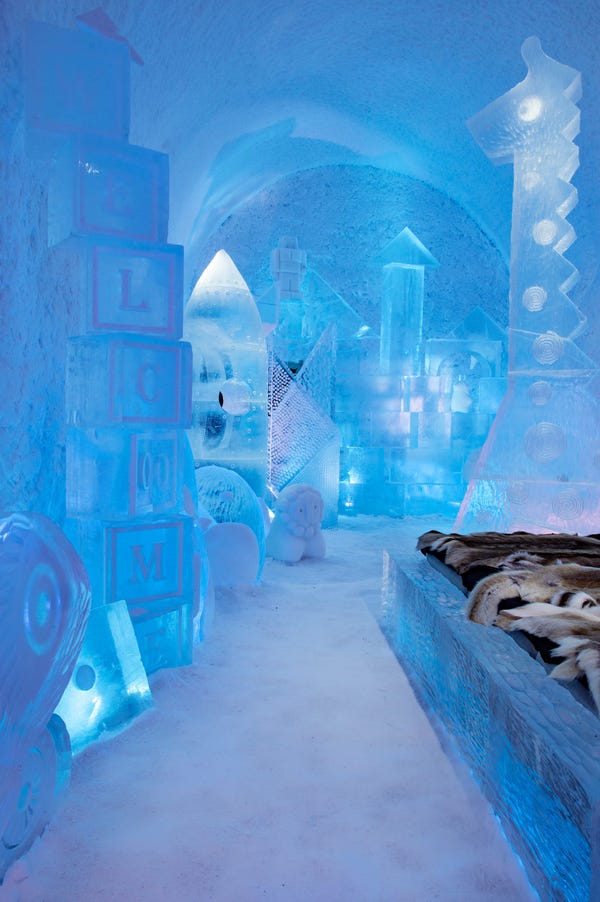 Dutch product designer Wouter Biegelaar and Bulgarian architect Viktor Tsarski teamed up to create a room inspired by and dedicated to their own children.

The room contains stacked letter blocks, an ice rocket, and a four-meter-tall giraffe, with the aim to "bring your inner child to life again."

Hang Loose is an art gallery that explores the choices we make in life. 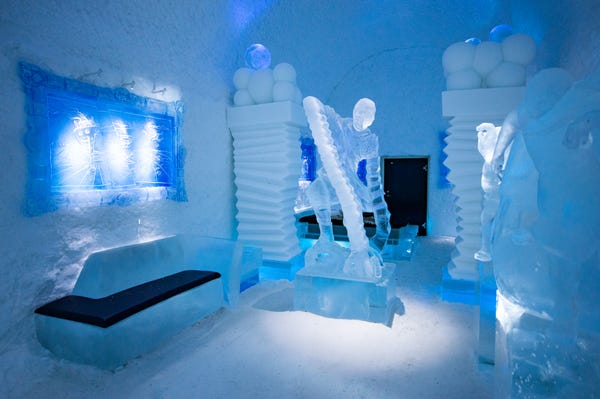 This art suite is adorned with framed artworks and sculptures on podiums, including one of a man that appears to have accordions for arms.

Since all ice rooms are kept at a chilling 23 degrees Fahrenheit, guests are provided with expedition-style sleeping bags that are tested for extreme temperatures. It's recommended for guests to wear thermals, a hat, warm socks, and a mid-layer sweater while in their sleeping bags.

A Rapunzel-inspired room lets guests feel like they are being hugged by a giant Maltese dog. 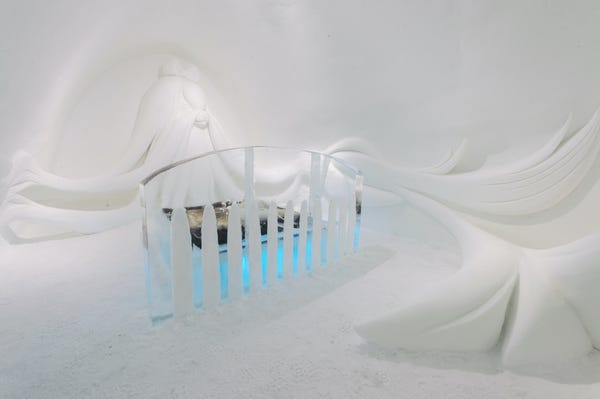 Rapunzel the Maltese dog sculpture is three meters high with long hair that flows around the room, providing a faithful companion "in times of isolation and solitude."

According to weather service Meteoblue, temperatures in Jukkasjärvi average at lows of 12 degrees Fahrenheit and can get a lot colder.

Icehotel provides guests with a thorough list of essentials to pack for a trip to the hotel and for the general climate. This includes wool socks, bigger shoes in order to wear extra pairs of socks, and lots of layers.

The hotel is also home to The Icehotel Restaurant and Värdshuset (Inn), The Homestead Restaurant, and The Veranda. 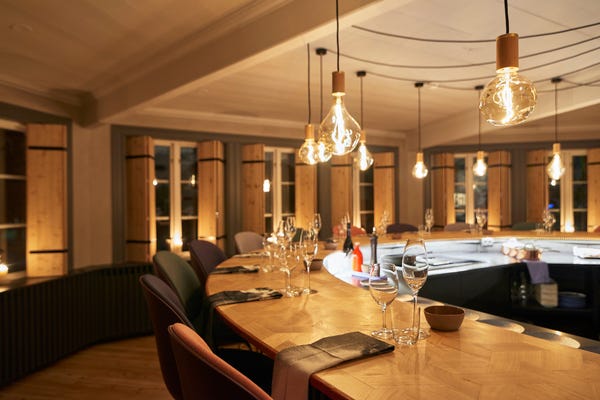 All are part of the hotel's warm section and offer dishes that include Swedish meatballs, pan-fried reindeer, and a variety of fish. At The Veranda, guests can watch while a 12-course meal is prepared in front of them.

Due to the pandemic, the hotel has introduced social distancing measures to its restaurants and public areas, spacing out furniture and frequently cleaning surfaces. The Swedish government recommends the wearing of face masks on public transport and in healthcare settings, as per the BBC, and groups at restaurants are currently limited to four people.

Here's what one of the "warm" rooms looks like. 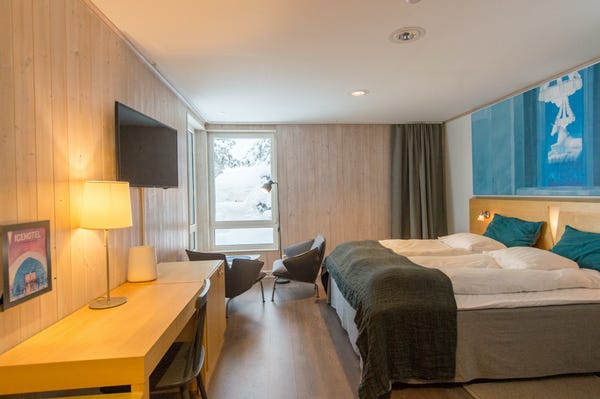 The hotel is following Swedish government guidelines and has several health and safety measures in place for guests and its staff. This includes the regular cleaning and disinfecting of all surfaces, increased access to sanitation facilities in both public and staff areas, social distancing in the art gallery and restaurant spaces, and limiting the number of people taking part in activities.

There is an Icebar on site where guests can unwind with cocktails served in glasses made from ice, as well as a snow-covered dance floor. 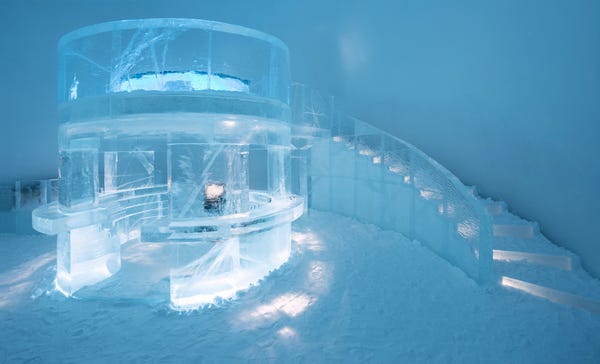 There are also permanent international Icebar locations in Istanbul, Copenhagen, and Oslo.

As well as exploring the hotel, there are plenty of other activities that guests can embark on at an extra cost. These are still available to guests, but they must be pre-booked and are limited to smaller groups.

Guests can partake in an ice sculpting class which the hotel describes as being "a must" for visitors. There are also multiple dog sledding experiences available, as well as a 10-step Jukkasjärvi sauna ritual that includes a tar soap wash and a plunge into the Torne River.

The Strawberry Room tells the story of Norwegian hotel investor Petter Stordalen and how he began his business efforts by selling strawberries in his hometown. 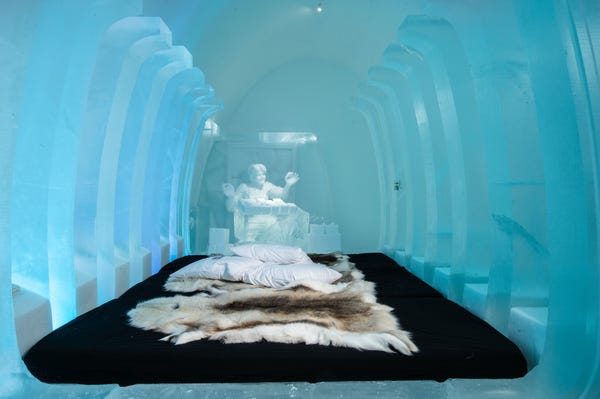 It took six weeks to create all the rooms for Icehotel 31 and used enough snow and ice to fill 10 Olympic swimming pools.

The room features a snow sculpture depicting Stordalen as a young boy, holding up strawberries and standing behind a strawberry cart. 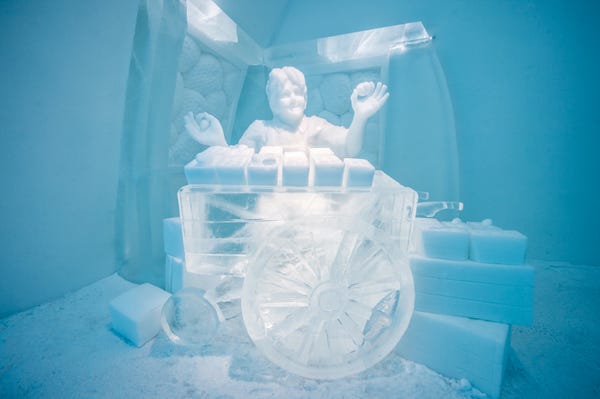 The Guardian suite is inspired by the lake Torneträsk and the mythical creatures that are said to live there. 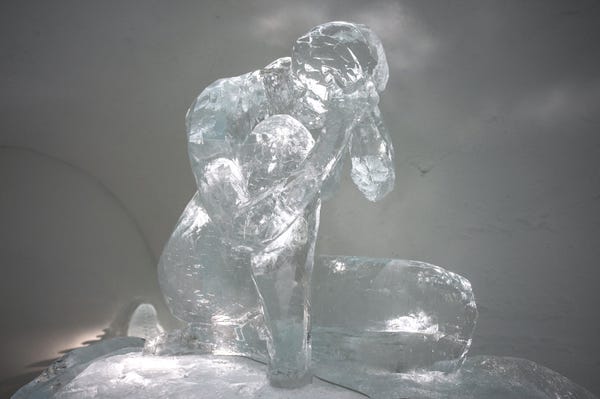 Torneträsk is a 90-minute drive north from Jukkasjärvi and is the sixth-largest lake in Sweden. The suite's guardian comes in the form of a large sea monster that engulfs the room and is surrounded by water nymphs and other mythical creatures.

Guests are invited to meditate in the Auris Interna suite, which is an ode to "deep listening." 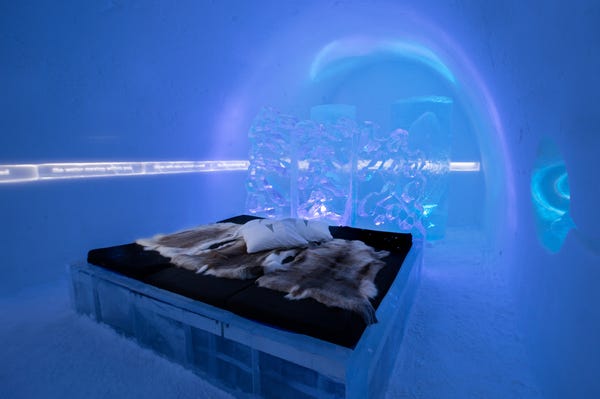 "The artists have created amazing fantasy worlds which will make our guests forget for a while that 2020 was a difficult year for each of us," creative director Roncoroni said.