Kate Middleton and Prince William have already offered up plenty of travel inspiration for royal fans thanks to some seriously glamorous royal tours.

In fact, the Duke and Duchess of Cambridge boast a pretty impressive travel diary already that has seen them travel to the likes of Canada, Australia, New Zealand and India.

And of course they've even been joined by their children Prince George and Princess Charlotte for some of their adventures (although Prince Louis has yet to go on his first royal tour!).

But it's not just their royal tours where the royal couple go exploring.

They pull out all the stops for their holidays too, heading to destinations such as Kenya and Mustique for some downtime.

If they're ever stuck for ideas they can always take inspiration from where other British royals go on holiday !

Kenya no doubt holds a very special place in the couple's hearts – after all, it was here where William proposed to Kate during a romantic getaway.

The couple were enjoying a retreat in Rutundu, reportedly staying at the luxurious Rutundu Log Cabin , a chic offering at the bottom of Mount Kenya and offering total privacy and pretty spectacular views of the landscape.

Prince William's love of Africa is no secret – the royal has visited on numerous times – so it could be that the couple do travel back one day.

However in 2019, it's Prince Harry and Meghan Markle who will be visiting on a royal tour to South Africa.

William and Kate have enjoyed not one but two royal tours to Canada, and both marked special milestones for the couple.

The Duke and Duchess made sure to pack plenty of destinations during the official visits.

In 2011 they embarked on a nine-day visit which included trips to Ottawa, Charlottetown on Prince Edward Island, Yellowknife, Blachford Lake, Eagle Island and Alberta.

Oh, and they even made time to attend the world's biggest rodeo in Calgary!

In 2016 the couple, with their two children, headed to Victoria in British Columbia where they attended heaps of events including a fun party for the children, as well as heading to hotspots such as Vancouver, Great Bear Rainforest and Yukon.

The sporty duo also visited the archipelago of Haida Gwaii, opting to head there by paddling in a traditional Haida Canoe.

In 2012 William and Kate embarked on a nine-day royal tour of South East Asia and the South Pacific, which saw them visiting the likes of Singapore, Malaysia, Borneo, Tuvalu and the Solomon Islands.

The tour saw them attending a host of events from meeting with locals to attending state dinners – and when they headed to Tuvalu they even donned traditional dress and had a dance! 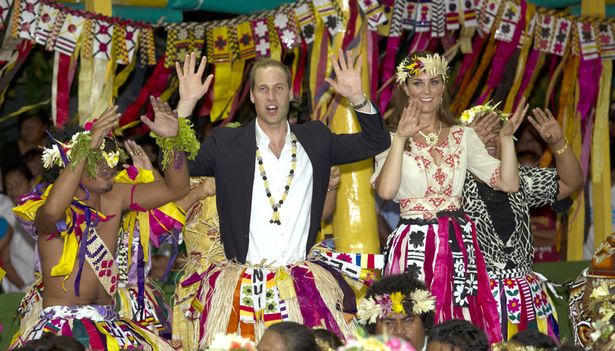 Their Borneo visit saw them walk through the dense green rainforest to learn more about deforestation and conservation work taking place.

They're not the only famous Brits to have made the journey – Judi Dench recently explored the island for new show Judi Dench's Wild Borneo Adventure and gave us serious travel envy in the process.

The couple's royal tour of Australia and New Zealand marked a new chapter in their lives – that of parents!

The pair brought along little George who made a few appearances during their visits of the countries, most notably enjoying meeting animals at Sydney's Taronga Zoo!

William and Kate packed plenty into their 18-day itinerary.

When in New Zealand they visited Wellington, Blenheim, Auckland, Hamilton and Cambridge, Dundein, Queenstown and Christchurch, while in Australia their itinerary included Sydney, the Blue Mountains, Brisbane, Uluru, Adelaide and Canberra.

Particularly memorable moments included the couple competing in yacht races on Auckland Harbour (Kate beat William in two races ), a cricket stop where Kate showed off her skills in heels, and a touching trip to Ayer's Rock, also known as Uluru.

The Uluru trip was particularly touching as the couple posed for photos in front of the iconic landmark at sunset, the same photo which Prince Charles and Princess Diana had taken when they visited Australia.

You can relive some of the 2014 royal tour highlights here . William and Kate enjoyed ski holidays together before they tied the knot, so it's no surprise that during the winter the royals have been known to hit the slopes.

However they delighted royal fans when they unveiled adorable official family snaps from one holiday with their two children, George and Charlotte.

Although the royals never officially revealed where it was they went for their ski trip, it's widely believed that the French resort of Courchevel served as the setting for their family holiday.

Of course they're sure to have plenty of inspiration for future ski holidays, as the British royals have favourite ski destinations they've been known to flock to during the winter months.

In 2016, William and Kate embarked on a week-long tour of India and Bhutan.

During their time in India the couple spent time in Mumbai where they met with locals and enjoyed a Bollywood-themed affair at the Taj Mahal Palace hotel.

Other highlights included a visit to India Gate and a trip to Gandhi Smirti, the museum located in Old Birla House where Mahatma Gandhi spent the last few years of his life.

William and Kate also headed to Delhi where they met with locals, including groups of children to learn about work carried out by charity Saalam Baalak, as well as enjoying a garden party in honour of the Queen's 90th birthday, and a meeting with Indian Prime Minister Narendra Modi.

The pair were also spotted enjoying a drive through Kaziranga Natiponal Park, looking relaxed and smiling as they took in the incredible views.

The couple also made time on the itinerary to visit the iconic Taj Mahal, where they posed for photographs in the same spots which Princess Diana had visited.

During their 2016 royal tour the couple spent a few days in Bhutan.

The couple also took on the gruelling six-hour trek to the Tiger's Nest monastery, looking relaxed and even spotted holding hands as they enjoyed the walk.