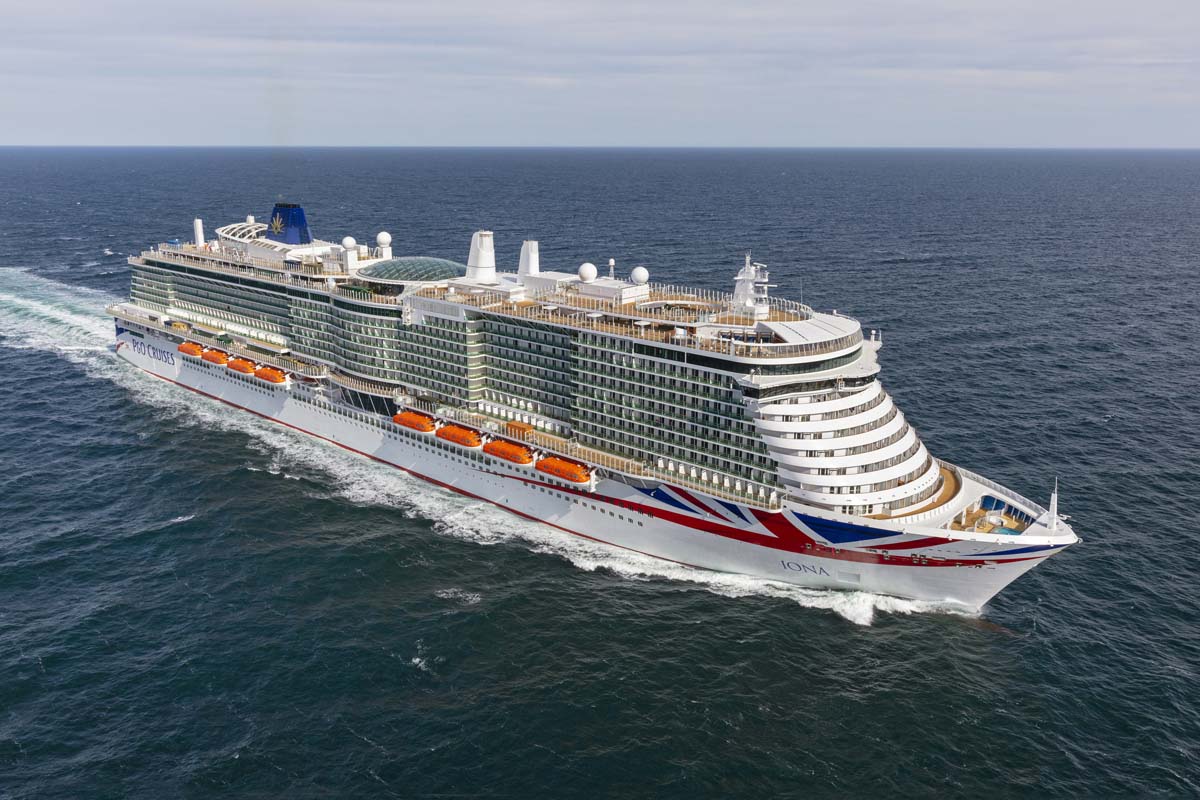 ‘My restaurant has the best views in the world,’ wine expert Olly Smith told me as rugged Scottish islands slowly passed by the three-storey windows at the centre of Britain’s new billion-dollar cruise ship.

Smith, one of the stars of the BBC’s Saturday Kitchen, is in charge of The Glass House, a wine bar with a tapas menu, on one level of the light, open and airy atrium which is a focal hub of P&O Cruises’ Iona.

He spoke to me as the ship – which, even less than half full, was carrying 2,500 people – headed on her maiden cruise to her namesake island (population 130) for celebratory fireworks.

We struck lucky with the temperamental Western Isles weather.

At the top of the ship, the two-deck SkyDome topped with a giant glass roof was bathed in sunshine as passengers enjoyed the indoor pool.

Outside, some were lying on loungers, swimming in the two infinity pools or top-deck lido, or climbing into one of the 18 hot tubs to make the most of the brief heatwave.

The Sunset Bar, at the stern of the ship, was beginning to fill with drinkers ready to see the sky streak red as day turned to night.

It’s easy when first boarding Iona – which, in our money, cost around £700million – to be overwhelmed by the size of this floating city, with 30 bars and restaurants, a four-screen cinema and even its own gin distillery on board.

But you soon find that the ship literally works on every level – each deck and zone has distinctly different furnishings, facilities, decor and vibe.

The thousands of passengers dissipate among the venues, seating areas and outside spaces so that only occasionally does Iona appear crowded – such as when we saw Spandau Ballet star Tony Hadley belt out familiar hits in the two-storey theatre.

Another act certain to pull in the punters is Take That star Gary Barlow, who will perform on several cruises next year, on top of his other role as music director of Iona’s 710 Club, named after the shipyard number for the vessel. Blur’s Alex James has also produced a DJ set and laser show for the SkyDome.

Pitching in on the catering front is chef Marco Pierre White, who has designed some of the menus, and pastry master Eric Lanlard, who has put his name to an afternoon tea.

Even on the week-long maiden voyage spent entirely on board without port stops there wasn’t time to do or sample everything. Often, there were major performances going on at the same time on different decks.

You’re spoilt for choice on food as well. Aside from the four main dining restaurants, where the meals are included as part of the fare, there are speciality venues which charge by the dish.

Essentially, though, the ship is proudly British from the giant Union Flag on its bow to the Sussex beer in the pub and three-pin sockets, kettles and PG Tips teabags in the cabins.

Built in Germany and owned by an American corporation, Iona nevertheless carries on the 180-year-old P&O Cruises tradition of catering to UK passengers heading abroad from its home port of Southampton.

True, you won’t get Tony Hadley on every voyage, but the entertainment promises to be always enthralling, with guest artists, an impressive new musical called Festival and colourful acrobatic aerial shows in the SkyDome. One of our best nights was seeing drag queen La Voix in the cabaret venue The Limelight Club.

Bands play in the 710 Club and in The Club House, while individual musicians perform in spots such as The Crow’s Nest observation lounge – we even had a group singing sea shanties in the atrium.

With cruises starting at a little over £50 a person per night for an inside room, Iona is remarkable value for money, even with the extra charges if you decide to treat yourself.

One of the key advantages of cruising is unpacking once and then being no more than a few minutes from bars, restaurants and clubs without worrying about getting there and back or worrying about who’s going to drive.

Sailing from Southampton allows you to take several pieces of luggage which are dropped off at the terminal to be carried to your cabin on Iona, whether it’s an inside room, one of the 1,486 balconies or a pick of the new 95 mini-suites with a separate ‘conservatory’ between the bedroom and the veranda. My cabin right at the front of the ship offered wonderful 180-degree views of the scenery ahead.

Iona is also one of the greenest cruise ships around, using liquefied natural gas that eliminates sulphur and nitrogen emissions and cuts carbon output by 20 per cent.

Iona was my fourth UK sailing this summer. These so-called ‘seacations’ are a great way to test the water on cruising and explore parts of the UK you may never have visited before.

Alternatively, why not consider booking ahead, for when P&O Cruises restarts international sailings in September?

When the very British Iona heads for Norway next summer, you can be assured there is a corner of a foreign fjord that is forever England.

Dave also writes about cruising on his blog, shipmonk.co.uk