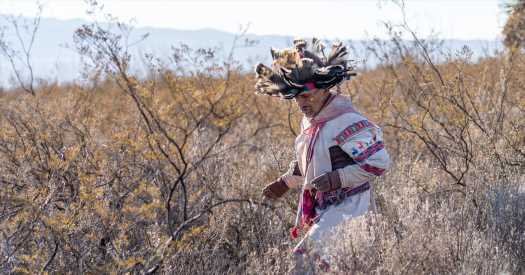 Mario Bautista was digging relentlessly at the ground. Deep in the vast and unforgiving Chihuahuan Desert, in northeastern Mexico, he had spent nearly eight hours wading through a seemingly endless patch of thorny brush. Surrounding him were 25 members of his community, including his wife and children.

Everyone in the group was searching for one thing: the psychedelic plant known as peyote, or hikuri — a small, squishy cactus camouflaged underneath the shrubbery. 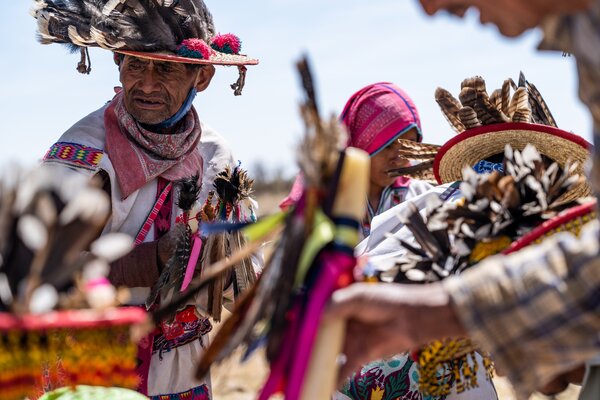 Mario and those alongside him are members of the Mexican Huichol, or Wixárika, people, and hikuri is their lifeline. Whatever they found would be brought back to their village for use in their daily religious rituals.

Spread across the rugged Sierra Madre Occidental range, the Wixárika are an Indigenous people with an estimated population of 45,000. Within their culture, peyote is far more than just a hallucinogenic cactus. The Wixárika believe that the plant allows them to connect with their ancestors and regenerates their souls.

Every year, Wixárika communities make a several-hundred-mile pilgrimage to a sacred place called Wirikuta, near the northeastern city of Matehuala. Groups travel — these days by car, trucks and buses — under the direction of a leading shaman, or maraka’ame.

Under Mexican law, only Indigenous groups are authorized to harvest and ingest peyote. But in part because of its increasing popularity as a recreational drug, the plant has become harder to find. If their holy lands continue to be threatened — by drug tourists, mining companies and farming encroachment — then a core aspect of the Wixárika’s identity will be in danger.

This past March, the photographer Matt Reichel and I were invited to join Mario and his family on their pilgrimage — as guests of his community, and to learn about and document their traditions.

Pilgrims are divided into groups based on their ancestral family lands, and each group can only access a particular area within Wirikuta. They must also receive an initial blessing in their homeland before setting out on the journey; for Mario’s family, the blessing took place in Rancho La Tristeza, near the village of La Cebolleta, in the Mexican state of Nayarit.

The next day, the group embarked on the pilgrimage adorned in their traditional dress. The women wore vibrant colored, hand-sewn dresses. Scarves protected their hair from the sun.

The men wore white shirts and pants, with embroidered depictions of deer, peyote and other symbols. They also wore wide-brimmed hats with plumed feathers. One particular man, K’kame, the guardian of the community’s ancestral pavilion, was a visual splendor: His hat held more plumed feathers than those of other pilgrims, and he was chaotically energetic during all the rituals.

On the first night, the group settled into a sacred site off the side of a highway. The evening’s first ritual was a name-changing ceremony: The desert became the ocean; peyote became chayote squash. Name changing helps the pilgrims envision entering a new world.

The pilgrims also underwent a public confession around midnight, during which each person listed all their past and present sexual relationships. The names were then publicly read around the bonfire; the intention was to let go of the past.

Each of the relationships was tied as a knot on individual palm branches. The branches were then burned in the fire.

Throughout the trek, pilgrims made offerings at sacred sites — areas where their ancestors had found water during previous pilgrimages. Water was key to the offerings; pilgrims used feathers and candles to sprinkle water over the offerings, which included corn tortillas and coins.

Families congregated by the watering hole, where they chanted, sang and blessed one another. A fiddler played a joyful tune in the background.

After traveling overland for a week, we finally reached our area, known as Bernalejos.

“It is the largest church in the world,” Mario proclaimed as we stepped into the desert.

The families rested for a while, but there was no time to sleep. Instead, the pilgrims stayed up to sing and dance for a good harvest.

The morning of the harvest, families painted their faces with single yellow dots on both cheeks. Mariana, Mario’s wife, explained that the paintings symbolized the sun.

In a beautiful formation, the community marched into the morning sunlight with machetes and baskets. Everyone stayed together at first, but gradually the families spread apart.

The harvest took hours and became increasingly difficult as the sun grew less forgiving. The largest peyote patches sat beneath shrubs covered in thorns; reaching them was treacherous, particularly in the heat of the day, when the colors seemed to blend together.

Still, the hunt continued. Mario explained that they were collecting peyote not only for themselves, but also for family members who could not make the journey. During the forage, each family had gathered up to 150 crowns, after which the plants were dried and blessed.

Around sunset, we walked up a hill to make one final offering. Mario asked us to hold out our hands. He tapped our faces, and we ingested small pieces of the peyote. The plant was incredibly bitter. The families only ate a little, about the amount for a microdose, which was meant to facilitate calm reflection. That night, the group collapsed into a peaceful sleep, as if a spell had been cast over our camp.

Well rested from the night before, we all collectively packed-up camp to leave the next day. As he took a look at the pile of his family’s crowns on the ground next to the smoldering embers of the campfire, Mario smiled at us. “We have been given a sacred gift from Mother Earth,” he said, “and now we have to return it home.”