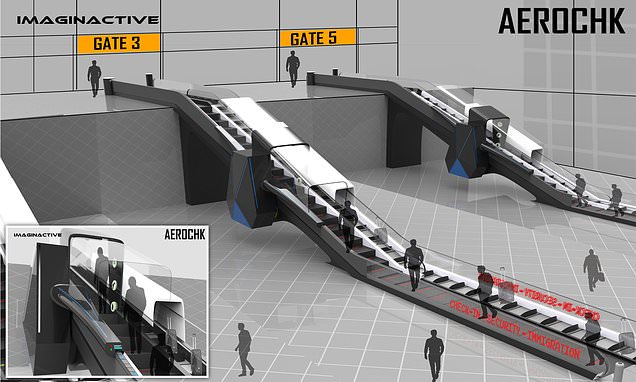 In the future plane passengers could clear security and immigration, check in, and get weighed – by going up an ESCALATOR (and the whole process would take less than a minute)

Airline passengers of the future might be able to check in for flights and clear security and immigration, and get weighed – while going up an escalator for a mere minute.

That’s according to two industrial designers who’ve come up with a concept called ‘Aerochk’, a high-tech escalator bristling with all the necessary computer wizardry to complete the aforementioned checks.

They believe that the concept would slash long delays at airport security and therefore drastically cut the number of passengers who miss flights. 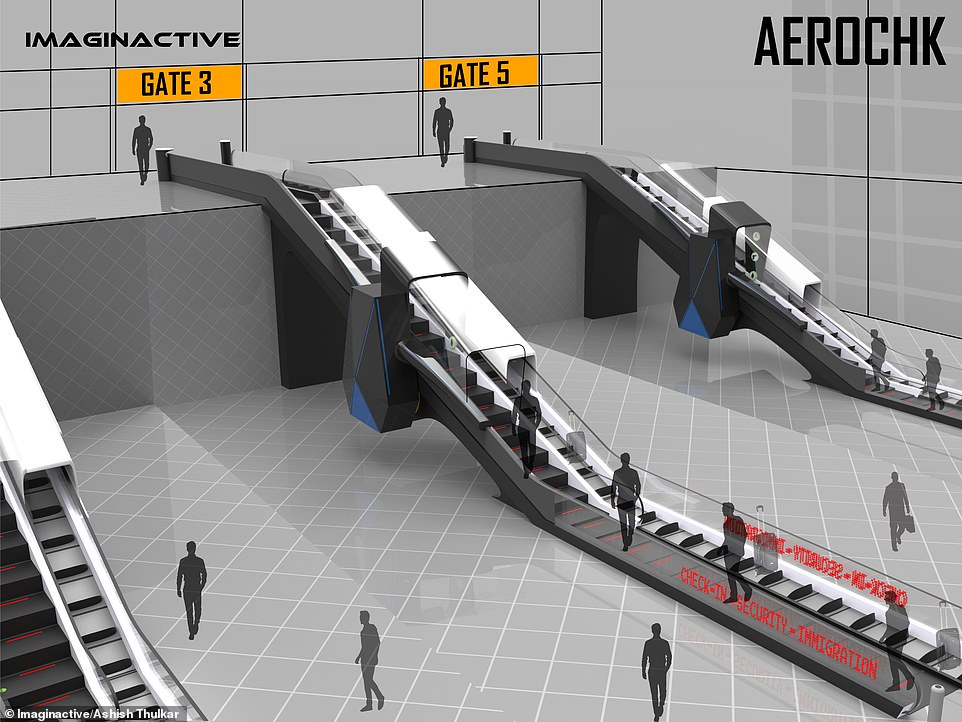 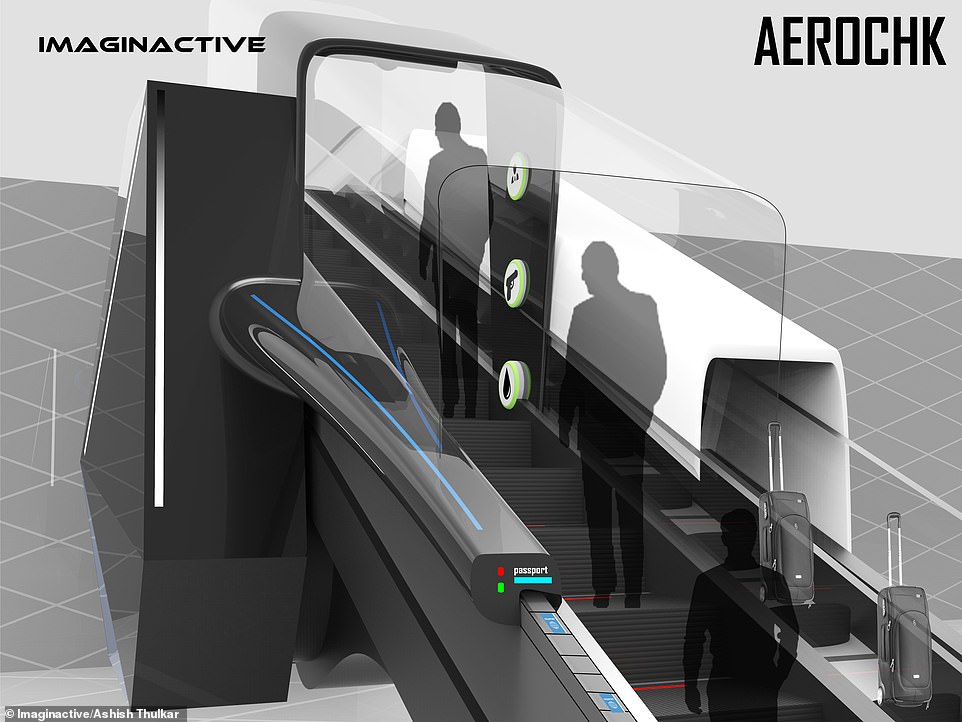 Passengers would place their passport on the left side of the machine and their luggage on the right, allowing passport, the traveller and the luggage to be checked simultaneously

Aerochk has been conceived by industrial designers Ashish Thulkar from India and Canadian Charles Bombardier.

They say that when passengers arrive at an airport, rather than waiting in a separate security line, they would just walk towards the nearest Aerochk on their way to their boarding gate.

Passengers would place their passport on the left side of the machine and their luggage on the right, allowing passport, the traveller and the luggage to be checked simultaneously.

The linear robotic passport conveyor would then check if the passport is valid and if the person is registered for an upcoming flight.

It would then register them for their flight and perform all other necessary background checks.

Facial recognition would confirm the passport photo with the individual on the Aerochk and specialized devices would confirm that the passport in question has not be tampered with or is fraudulent. In the event of a person’s denial to travel – i.e. invalid documents, failed background check – the Aerochk would set in motion a process to alert the relevant authorities.

Each traveler embarking on the Aerochk would pass through a portal where they would be identified by cameras and other sensors.

Their height and weight would be recorded to optimize the weight and balance of the aircraft and other equipment would be used to identify passengers and determine if they pose a threat to the flight or a country.

The Aerochk could even ask questions to each traveler and record their vocal answers.

The luggage conveyor would check if bags contain dangerous or prohibited items using multiple types of scanners including ‘electronic noses’.

Each suitcase would be photographed, weighed and associated with its owner automatically.

Larger bags would be diverted into the cargohold while hand baggage would be picked up by passengers upon exiting the Aerochk.

If a problem was detected on a suitcase or if more information is required, then it would be routed to a different exit and inspected by an airport agent. 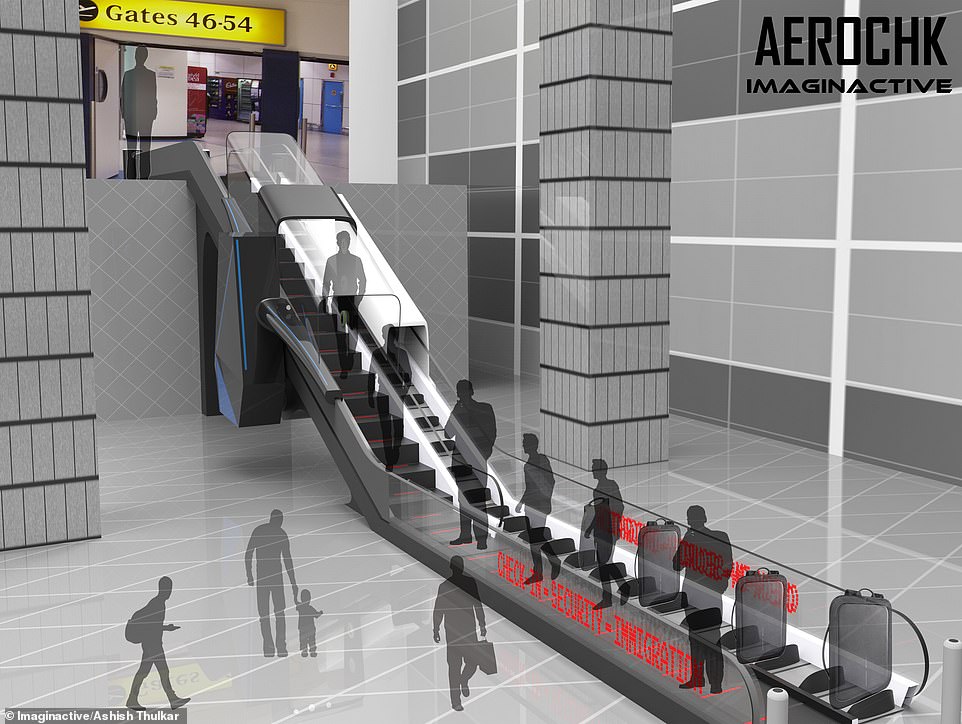 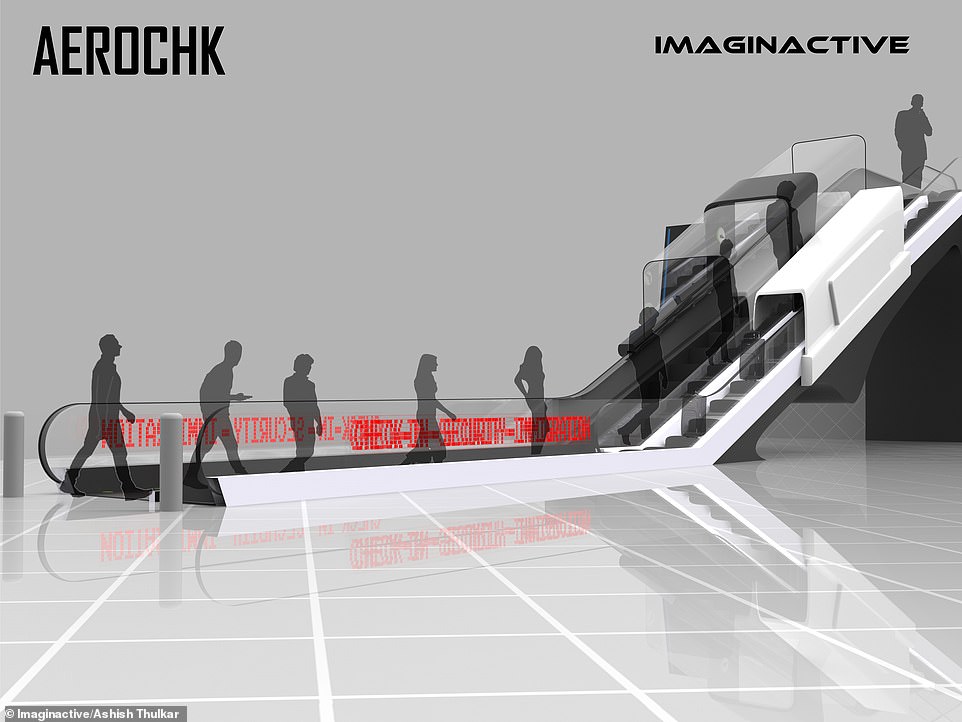 The designers add: ‘Technologies already exist to accomplish this type of fast and efficient check-in.

‘Other versions of the Aerochk system could even be designed and adapted for children, disabled people, pregnant women, and so on.

‘The optimal way to organise this new process is open for debate, but it is clear that we could all benefit from a faster and easier boarding process.’ 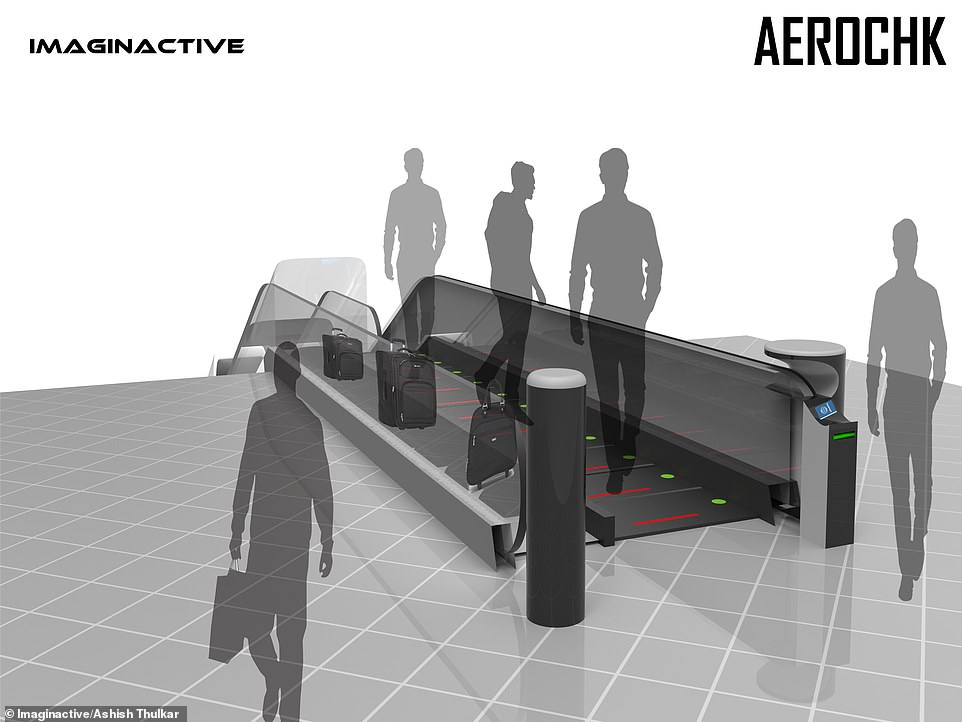 At the top of the escalator once passengers have cleared security, they can collect their passport as well as their hand luggage. Big suitcases are routed to the cargo hold

The pair also claim that Aerochk reduces the likelihood of human error adding that currently, it is very easy for workers in airport security to miss contraband in luggage simply due to the excessive volumes that they have to process every hour.

As it is still in the concept stage, the idea has not yet been sold to any airport but the two designers believe it could be easily installed in airports, ports and bus and railway stations around the world.

They add: ‘We believe that it is possible to improve the screening process at these transport hubs using existing technologies and infrastructures.’