By the time the tiny hut came into view, nestled high in a corrie in Scotland’s 1,748-square-mile Cairngorms National Park, I’d trekked for nearly nine miles, three of which, regrettably, I’d had to navigate after nightfall. The hike, through a broad valley in the Eastern Highlands called Glen Derry, carried me past groves of Scots pines and over a series of streams, some of which, lined with slick steppingstones, made for precarious crossings. All the while, two rows of smooth, eroded mountain peaks enclosed me in an amphitheater of muted colors: hazel-hued heather, golden grasses. Though much of my walk was solitary, the flickering glow in the hut’s main window, I knew, meant I’d have some company for the night and the warmth of a fire to greet me.

My overnight home, the Hutchison Memorial Hut, colloquially called the Hutchie Hut, which I visited in late October, is one of more than 100 rustic shelters scattered throughout England, Wales and Scotland that are frequented by a motley assortment of outdoor adventurers. Left unlocked, free to use and with most offering little more than a roof, four walls and perhaps a small wood-burning stove, the buildings, called bothies (rhymes with “frothy”), are an indispensable — if for many years underground — element of British hill culture.

A vast majority of bothies are repurposed structures — crofters’ homes, shepherds’ huts, mining outbuildings — that have been salvaged from various states of disrepair by the Mountain Bothies Association, a charitable organization founded in 1965 whose aim is “to maintain simple shelters in remote country for the use and benefit of all who love wild and lonely places.” Some, like Warnscale Head in England’s Lake District, date to the 1700s. Collectively, since they came into recreational use in the 1930s as weekend getaways (sometimes used clandestinely) for working-class laborers, bothies have given rise to a unique culture that values communal respect for fellow visitors, for the bothies themselves and for the land on which they’re situated.

But bothy culture, some longtime proponents fear, is imperiled by a generation unaccustomed to shrewdly guarded secrets. Map coordinates for the often hard-to-find dwellings, once dispersed only among hiking insiders, are now available openly on the internet. Popular hashtags have helped create something of a buzz on Instagram, where bothies are sometimes presented, misguidedly, as an alternative to Airbnb rentals. (The bothy code unequivocally prohibits the use of bothies for commercial purposes, and discourages their use by large groups.) A hugely popular and impressively researched guide, “The Scottish Bothy Bible,” published in 2017, lines shelves in stores throughout the U.K., the first of many bothy guides to achieve a kind of mainstream success. It, too, has increased foot traffic. 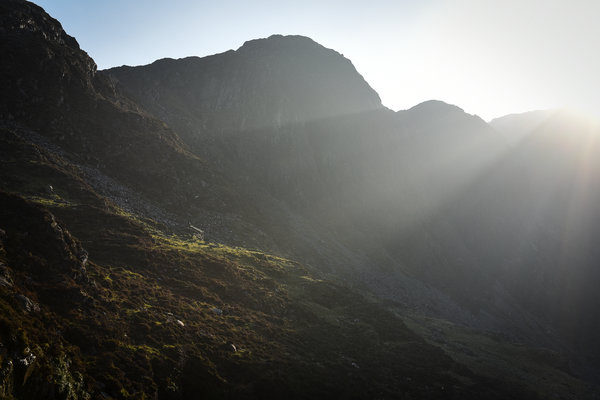 Bothies, I should mention at the outset, are not for everyone. Over the course of two weeks, while hiking some 200 miles and visiting 20 of them (12 of which I slept overnight in), I battled sopping boots, squally winds, dispiriting cold, blinding rain and seemingly impenetrable bogs only to reach dwellings that, by most modern standards, are ill-suited for human occupancy. The interiors are often dark and dank, with cold stone floors that double as stiff sleeping platforms. With few exceptions, toilets consist of the great outdoors, along with a small spade and posted instructions to deposit one’s waste a considerate distance from the building. More than once I awoke to the sound of mice skittering near my head.

But to me and many others, the discomforts are a barely distinguishable blip — and, dare I say, often an ascetic pleasure — in an otherwise rapturous experience. Bothies are a portal. In all their understated glory, bothies allow for prolonged access to Britain’s rugged, restorative and majestical hidden corners, places that might otherwise prove unforgiving or impractical as day-hike destinations for the casual explorer.

When, cold and exhausted, I finally crossed the threshold of the Hutchie Hut, I was greeted by three strangers: Tom and Lee, two undergraduate students at the University of St. Andrews who were perched on the tiny room’s tiny sleeping platform; and Yakub, a fellow journalist from Manchester who’d made a pallet for himself on the floor. Seeing that their fuel was low, I offered up my bundle of firewood and my small bag of coal, then unfolded my sleeping bag on the floor and gratefully accepted a swig of Tom’s whiskey. Within minutes, buoyed by tales of our sundry mishaps on the way up the mountain, the four of us were strangers no more.

Such encounters were common on my trip, during which I crossed paths with a few dozen fellow adventurers: climbers, environmentalists, families, solitary hikers, groups of friends, young and old. Some were drawn by the promise of nighttime carousing, others by a deep connection to the land. Lynn Munro, who I met at Coiremor and Magoo’s, two adjacent bothies in the northern Highlands, called the surrounding area her “favorite square kilometer in the whole world.” With two friends, Tom and Francis, she’d ventured out for a restorative trip to a place she’s visited on and off for her entire life. I fell asleep that night to the sound of the trio singing harmonies beside the fire.

I also met a number of “Munro baggers,” climbers in search of the 282 Scottish peaks that exceed 3,000 feet, for whom certain bothies serve as convenient base camps. After a particularly grueling hike to Ben Alder Cottage, a remote bothy in the Central Highlands, I pushed open a brightly painted blue door to find a couple sets of gear sitting unaccompanied near the stove. Moments later, two chipper climbers bolted in, both wearing shorts, despite the driving rain and near-freezing temperatures. Thomas and Benedict, students from the University of Edinburgh, had ventured out — by train, then bicycle — to make an attempt at summiting Ben Alder, the 3,766-foot mountain that loomed nearby.

At Ruigh Aiteachain, far and away the most luxurious bothy I visited, I shared a coffee and a meal with Lyndsay Bryce, who for many years has volunteered as the building’s caretaker. Like most of Britain’s bothies, Ruigh Aiteachain is part of the network maintained by the Mountain Bothies Association. (The organization has around 3,800 members. Of the 104 bothies under the its care, 83 are in Scotland, 12 are in England and nine are in Wales.)

In M.B.A. parlance, Mr. Bryce is a “maintenance organizer” and a liaison, in a sense, between the Glenfeshie estate, which owns Ruigh Aiteachain and allows for its communal use (and has invested significantly in its renovation), and the M.B.A., which helps provide for its maintenance. (Each M.B.A. bothy has at least one dedicated maintenance organizer, and most bothies, while publicly accessible, are privately owned.) Mr. Bryce spends several days a month at the bothy, he said, completing minor repairs, arranging for routine maintenance and monitoring its use.

On my trek to the Burnmouth Cottage, a far-flung bothy on the Isle of Hoy (two separate ferries and a six-mile walk were required to reach it), I ran into Jeff Clark, who was out for a walk with his dog, Skye. One of only five full-time residents of Rackwick, a tiny village on the island, Mr. Clark was the caretaker of Burnmouth from around 2000 to 2010. (Unlike most bothies, Burnmouth Cottage is owned communally, by the local Hoy Trust; it has no affiliation with the M.B.A.)

“People visit the bothy from all over the world — a lot of them to climb the Old Man,” he said, gesturing in the direction of the Old Man of Hoy, a nearby 450-foot sea stack that balances, unsettlingly, just off the coast.

“It’s nice to know that they can come and enjoy the area,” he said, adding that many of the Americans who visit can’t believe it’s free.

Apart from the communal revelry that accompanies the sometimes crowded dwellings, bothy culture can convey itself in quiet ways, too. Notebooks provided by M.B.A. volunteers offer a chance for visitors to log entries about their stays, and often contain helpful advice. “Top tip: Peat burns best in palm-size bits,” read one entry at a far-flung bothy called Strathchailleach (formerly a hermit’s home), where the only locally available fuel comes in the form of a nearby peat deposit. “Check for ticks,” read an entry at the isolated Ollisdal bothy, tucked away on the Isle of Skye’s Duirinish Peninsula. (Sure enough, when I unlaced my boots to look, I found four of the tiny critters inching up the bottom of my leg. I brushed them off.)

Flittingford, one of the newest M.B.A. projects, was in complete disrepair — its roof long ago collapsed, its gables crumbling, its ruins fully hidden by a grove of fir trees — when it was rediscovered during a recent round of timber harvesting. Now, visitors to the bothy, newly renovated and opened in 2017, can quietly commune with the memory of R. Robson and J. Proudlock, two local forestry workers who, 60 years ago, etched their names into the building’s cement window frame.

There’s no doubt that Britain’s hills, lakes and heaths make for perpetually awe-inspiring settings. But, particularly as one presses ever northward into the Scottish highlands, the moorlands can also make for a challenging and sometimes perilous landscape. The mix of rain and gales can be blinding. Trails can consist of little more than slightly trampled grass, easily mistaken for the paths left by wandering rivulets or grazing sheep. While traipsing through a moor during or after a hard rain, each step becomes something of a calculation: Which foothold is least likely to give way, leading to a boot filled with boggy water? Over time, with practice, one’s calculus improves. But despite my hiking experience, I never felt 100 percent certain that what looked like firm, dry land wouldn’t give way and envelop my entire leg — which, inevitably, it did.

And therein lies what may ultimately serve as a saving grace against the threat of overcrowding. Reaching Britain’s truly spectacular bothies requires a good deal of effort and often a little risk. Those driven by the thrills of Instagram “likes” and free accommodation will, by and large, find themselves insufficiently motivated for the trek. And those who do value the restorative spirit of the places are likely to become ambassadors of a continuing and evolving tradition.

Bothy culture, in other words, may prove more resilient than some would have you believe.

All of which helps to explain an endearing entry I spotted in the Hutchie Hut’s bothy book, logged in mid-September. “Last here 50 years ago,” begins the brief note from a hillwalker named GW. “Nothing much has changed.”

An interactive map with pins for all 20 of the bothies visited for this story is available here.

Stephen Hiltner reported this article for the Surfacing series.

Stephen Hiltner is a reporter and photographer for the Surfacing column. A graduate of the University of Oxford and the University of Virginia, he joined The Times as a staff editor in 2016 after editing for six years at The Paris Review. @sahiltner • Facebook