As a sport, skiing is struggling to maintain a toehold, with the number of skiers falling to 6.8 million in 2016-17 from 7.3 million 20 years ago, according to a survey from the National Ski Area Association.

What remains stable is the women’s share, which hovers around 40 percent. And women’s visibility is rising in the industry’s upper ranks. In 2017, the NSAA and the National Ski Patrol both appointed their first female leaders. Women-specific gear, long an afterthought, has taken off to the point that the overall best-selling ski in America since the 2015-16 season has been a women’s model, Blizzard’s Black Pearl.

Most resorts now also provide women-only instruction. “It’s something that’s increased significantly over the past few years,” said Wendy Clinch, 63, who runs The Ski Diva, the leading online community for female skiers. “If you don’t have it, you’re kind of in the dust.”

The Bentley of the many clinics, lessons and camps offered throughout North America is the women’s program run by the Alta Lodge, in Utah — the all-inclusive fee for the 2018-19 camps starts at $2,815 per person for three days and four nights.

Here are some lessons gleaned from a session for intermediate-advanced skiers held in January 2018. 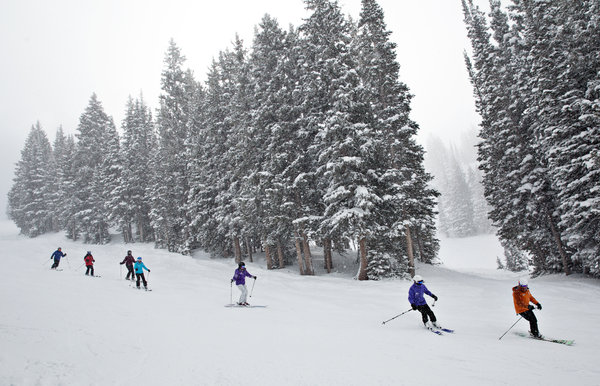 With 15 hours of instruction packed into three days, the camp is up and running quickly. It’s a good idea to show up one or even two days ahead to get used to the altitude (the lodge is at 8,530 feet and Alta peaks at 10,550) and find your ski legs, especially if you haven’t been on snow in the season yet. Women used to skiing in the Midwest or Northeast must also factor in the Wasatch’s fluffier snow and steeper slopes — Alta’s expert runs are much more demanding, on average, than expert ones in New York or Vermont, and that’s true of much of the West.

You don’t have to fork over for a rental car or an on-slope lodge during these extra days, either: Hotels and Airbnbs abound in Cottonwood Heights, at the base of the mountain. I booked a room in the valley, and for two days I used Lyft to ski at Alta and neighboring Snowbird.

Forget your own skis

Camps tend to include high-end rentals, which at Alta you can get at the Deep Powder House store next door. This makes it easy to find gear best suited to your skill level and skiing style, as well as the changing conditions. There was not much fresh snow when I arrived in Utah so I rented skis with a relatively narrow waist and a good edge hold that would provide decent grip on sketchy, hard-packed slopes. After Alta was hit with 23 inches of powder I switched to skis with a wider waist for better flotation.

Another benefit for women in their 50s and up is getting guidance on how to get the most of the modern shaped skis, which behave differently from the long, narrow planks of yore.

As for boots, they are the most critical piece of equipment and a necessary investment — “date your skis, marry your boots,” as the saying goes. If you don’t already own a pair, the camp is a good time to take the plunge because you can fine-tune the fit as much as necessary.

Find your limits — and go beyond them

Upon signing up, campers generally fill in forms about their skiing level and physical condition to help the instructors create cohesive groups. At the Alta camp, the head instructor, Jen Scott, 43, placed me in the upper-level group, which was both flattering and scary because I tend to underestimate my abilities. This is a common problem among women (men have the exact opposite one) and affects your skiing technique since the sport requires decisiveness and confidence. At Alta, the main imperative throughout was to make the campers adopt an aggressive “athletic stance” — leaning forward into the fall line, shins pressing against the boots’ tongue to apply pressure on the ski tips. That affects not just your posture but your frame of mind: go out there and get it!

Be ready for painful revelations

Video reviews are an integral part of the instruction plan at many camps. Two or three times a day, the Alta instructors film students as they execute specific drills, then review the footage over lunch or dinner. The process helps make adjustments, but it’s also sobering: It turns out that for decades I had lived in blissful ignorance of the fact that my butt sticks out when linking turns on steep terrain. It’s one thing to have a vague idea of what you look like skiing; it’s quite another to watch yourself while a professional dissects your every move. For the many type As who tend to turn up at the Alta camp, video review can be a kick in the pants.

Camps forge a unique camaraderie which is especially valuable since a common complaint among female skiers is the difficulty of finding peers with whom to hit the slopes. A unique feature of the Alta Lodge experience is that students and instructors share meals and a roof, providing plenty of opportunities to talk shop, exchange tips and stories, and make plans for yet more trips. Many women sign up for next year as soon as the camp is over — tellingly, I was one of just six newcomers out of 29 participants.

“Yes, I know it’s kinda pricey but I’m addicted to the friends I made there,” said Sally Shwartz, 59, from Providence, R.I. “I’m looking forward to catching up with them next year. It’s more than just instruction at this point for me.”