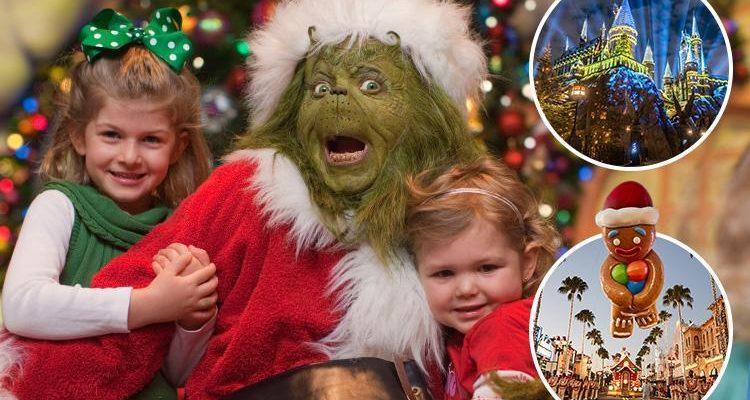 I’m at Universal Studios Orlando and the Christmas-hating green man is letting out a throat-rumbling belch that I can’t believe isn’t from the gut of the Hollywood star himself. 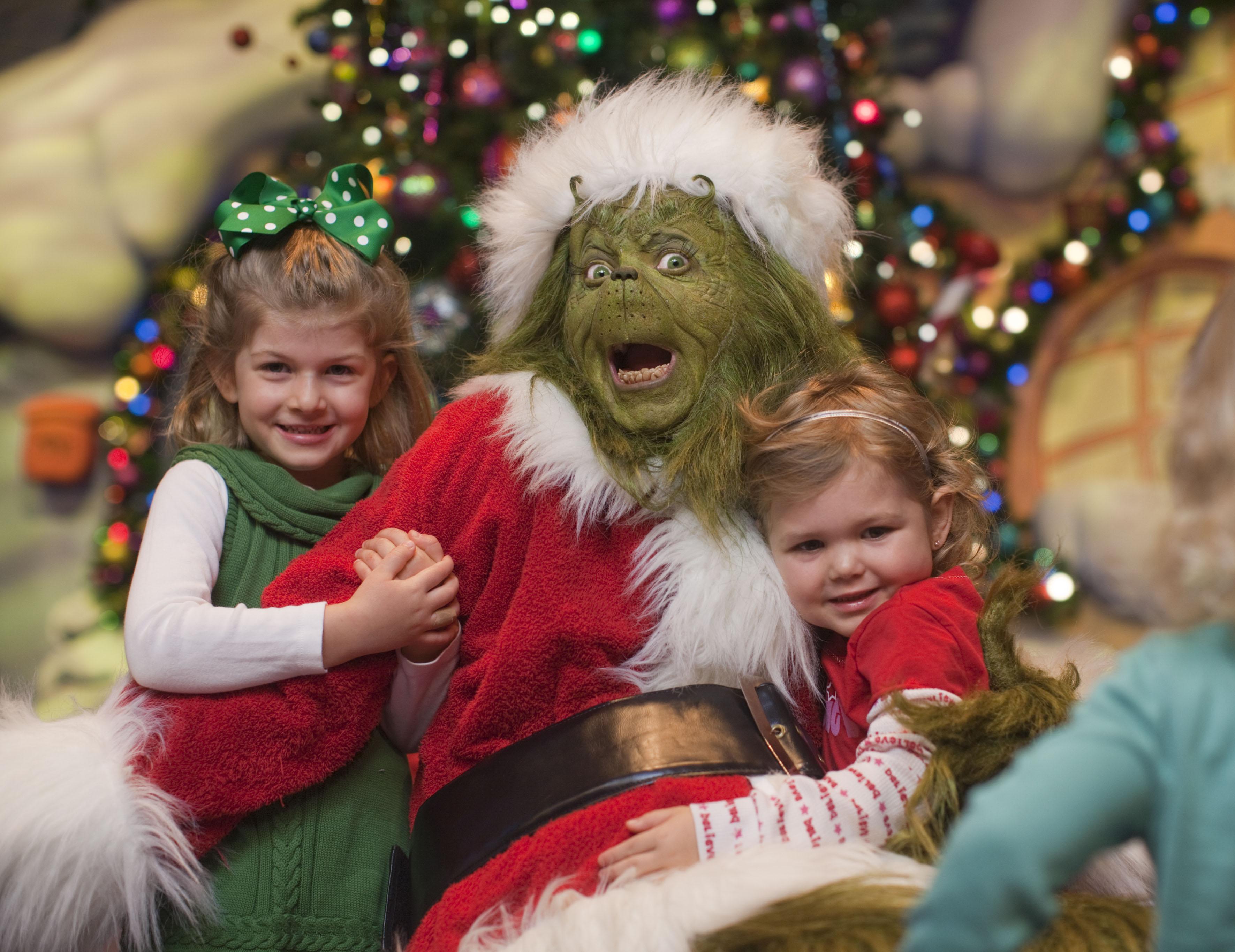 In fact, the entire Grinchmas show cast are uncannily similar to their on-screen originals.

The musical, which mirrors the 18-year-old classic with a few extra songs thrown in, is a highlight of Universal’s epic annual Christmas makeover.

Within seconds of entering the park that morning I’d been assaulted by an avalanche of Christmas cheer.

A Pitch Perfect band was belting out carols by a giant Christmas tree, while yuletide characters hung around every street corner, from a Nutcracker and the jolly fat man himself. 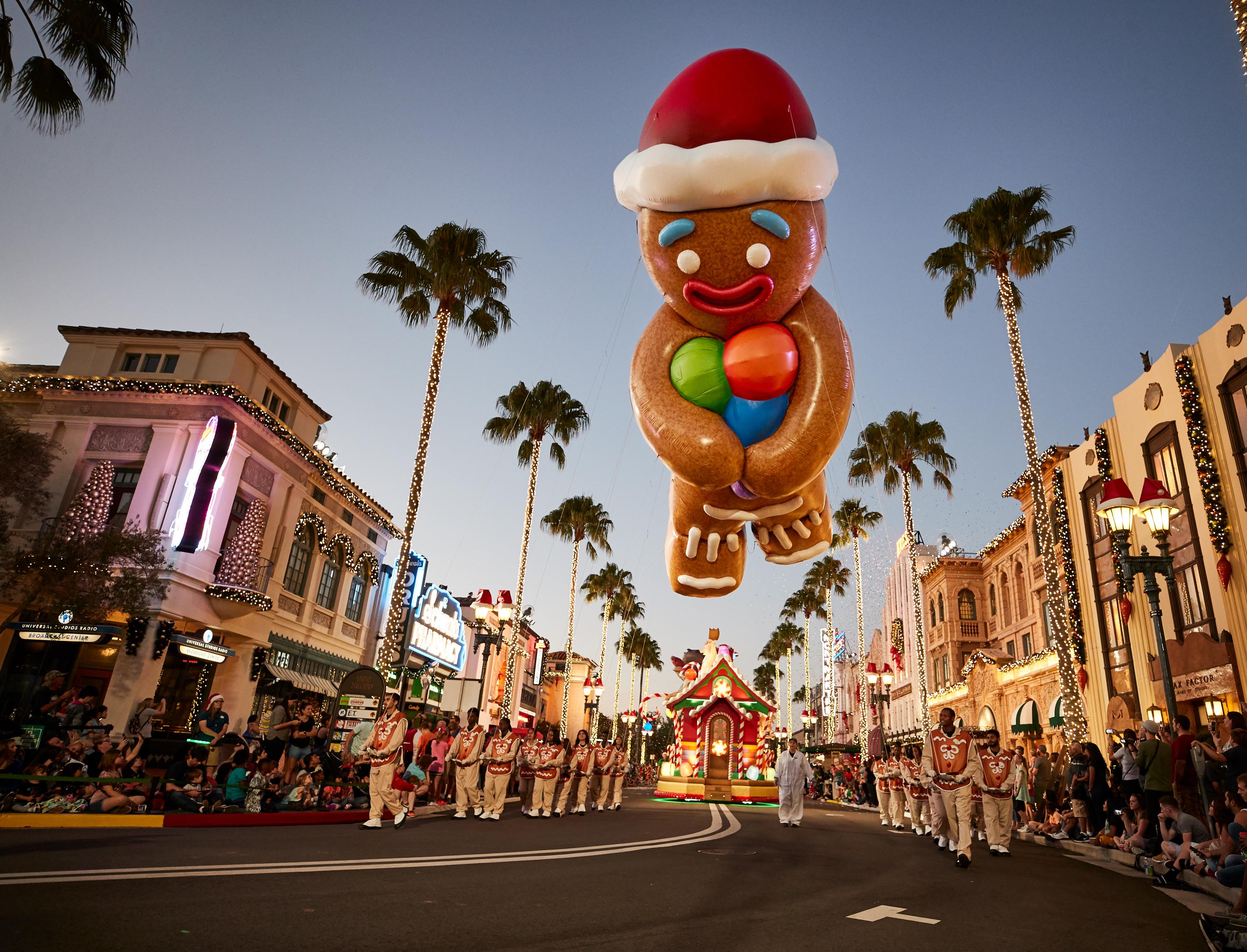 I wasted no time strapping into the thrill rides for some yuletide fear, starting with Revenge of the Mummy, the reliably thrilling Harry Potter and the Forbidden Journey, and on to Jurassic Park River Adventure — which begins as a scenic water cruise, before shocking you with an 85ft drop through the pitch black.

When I wasn’t flying through the air, I was gorging myself silly on festive food at the Three Broomsticks in Harry Potter’s Hogsmeade village.

Stepping off the Hogwarts Express into the snowy streets of the wintery town was bewitching.

Miles of tinsel, fairy lights and garlands make it extra special in winter. With Hogwarts Castle looming over me in the near distance, I instantly felt like I was on the real set.

Despite the balmy weather, a nightly artificial snowfall helps to convince you that you’re anywhere but Florida.

The live street entertainment has been given an upgrade for the season too, with the Hogwarts Frog Choir performing recognisable tunes from the franchise, including Hedwig’s Theme, and The Quidditch World Cup.

But the magic really kicks into high gear with the stunning light and sound show projected on to Hogwarts Castle.

Clutching a hot Butterbeer, the seven-minute extravaganza dazzles the crowd with imagery from the franchise.

A week room-only at Universal’s Aventura Hotel is from £414 per adult, £404 per child, based on two adults, two children (age 3-9) sharing a standard 2-queen room.

Wizards fly around the castle, magical fairies come to life against backdrops from the films, including the Yule Ball, before a fireworks finale.

From here, it was just a short taxi boat home to Universal’s Aventura Hotel, a brand new property within walking distance of all of the parks and Universal CityWalk.

The chic, modern rooms feature iPads to control everything in the room, from the heating and lights, to the TV, where you can connect to your own Spotify, Netflix or Amazon Prime.

On my final day, I got to experience the jaw-dropping floats from the Macy’s parade, including a giant balloon Donkey from Shrek, 15 new floats and light displays with characters from Minions and Madagascar.

Finally, after racing around the rest of the theme park’s thrill rides, I visited Universal’s CityWalk for the scariest attraction of all.

Rising Star! is a karaoke bar on steroids, with backing singers and an entire band who play live on stage with you.

Next morning, a little green around the gills, I listened back to my full rendition of Vanessa Carlton’s A Thousand Miles.

Suffice to say, I’ll be leaving the Christmas crooning to Mr Grinch next year.