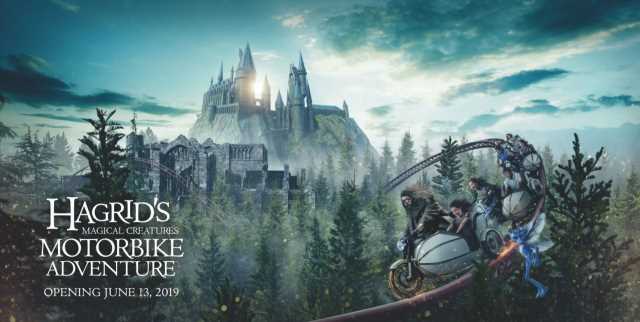 Centaurs and pixies and three-headed dogs, oh my!

Universal Orlando Resort revealed a first look at the creatures that will be featured in the theme park’s newest rollercoaster — and it looks even better than one of Hogwarts’ Care of Magical Creatures classes.

In February, Universal Orlando announced that it will be bringing “Hagrid’s Magical Creatures Motorbike Adventure”  to The Wizarding World of Harry Potter, where muggles and wizards alike will be able to accompany Hagrid through the Forbidden Forest on a whirlwind journey to see some of the rarest magical creatures from the book series and movies.

Those who go on the rollercoaster will be confronted with sinister Devil’s Snare, a plant that entangles humans in its vines. Riders will also seen Cornish Pixies, mischief-causing tricksters famous for their appearance in Chamber of Secrets, in which they perilously hung Neville Longbottom from the ceiling.

Centaurs will also be roaming the forest they call home, as will Fluffy, the three-headed dog that guarded the Sorcerer’s Stone in the first Harry Potter book.

The ride will also mark the debut of the creepy Blast-Ended Skrewt — an infamous creature from the book series that was never shown in the films.

The first renderings of the never-before-seen beast show a four-legged animal with a pointed tail like a scorpion’s, talon-like feet and charred stripes.

The thrill ride, which will open at the theme park on June 13, is said to be their “most highly-themed coaster yet,” and will be located in Hogsmeade in Universal’s Islands of Adventure park.

The new Hagrid-centric ride will join other Potter-related attractions in Hogsmeade, including Harry Potter and the Forbidden Journey, which takes riders on an adventure through Hogwarts, and the family-friendly Flight of the Hippogriff rollercoaster.

On the other side of the park, which is accessible via the Hogwarts Express, guests can visit Diagon Alley, where they can shop for a wand at Ollivander’s, dine at the Leaky Cauldron, and hop on a thrill ride through Gringotts bank.