If Covid-19 has taught us anything, it’s to expect the unexpected. Outcomes that seem assured today may become impossible tomorrow — and vice versa. As an American living in Madrid for much of the last 20 years, I have deep roots in both Spain and the United States and, over the last 14 months, have often felt the pandemic unfolding at two different speeds — when one country has been relaxing protocols, the other has been restricting activity.

The contrast has never been clearer than right now as the pandemic has once again flipped the script. In December, no one expected the U.S. vaccine rollout to get rolling so fast. At that time, some observers forecast that Americans — of whom around 200,000 or more were then getting infected every day — might be banned from many European countries through 2022 or longer.

Now just four months into 2021, the European Union has announced plans to welcome vaccinated Americans to countries where many locals may still be at risk.

In mid-March, as friends and family were getting vaccinated in the United States, and as production problems and health concerns about some vaccines slowed the European Union’s already sluggish campaign, my husband and two children and I found ourselves packing our suitcases for New York. A few weeks later, we returned for the second dose of the Pfizer-BioNTech vaccine — and some long-awaited family time.

Recent news articles have focused on American expats who have considered going back to the United States to get vaccinated. While it’s impossible to determine the exact numbers, I personally know about half a dozen Americans across Europe who, like us, made that decision. (Currently, only U.S. citizens, their spouses — if traveling with them — or parents of minor children who are American citizens can enter the United States, and anyone over 2 must have a negative P.C.R. test withing 72 hours of arrival.)

The U.S. government has no program for vaccinating Americans abroad, and expats — all of whom maintain the same rights (voting, for example) and responsibilities (filing income taxes) of residents — are free to fly home and get vaccinated. But the act of taking matters into one’s own hands can feel daunting, and there was also the fear that, as was happening in Europe this winter, we might turn up for our shots only to be told they were out of vaccines and we’d have to reschedule.

Finally, I reached out to two American friends who are doctors. One, an infectious disease specialist in my home state of New Jersey said: “The number of doses being distributed and administered now is growing exponentially. If you get an appointment, I’d make it to that appointment.”

The prospect of getting vaccinated was a big turnaround from spring 2020 when the first wave of illness crashed over Europe — especially Italy and Spain — confining us to our homes, and shuttering schools and businesses while Spaniards were encouraged to curtail nearly all movement and activity.

But the strict measures and nearly universal compliance flattened the curve to such an extent that by mid-June — just as unexpectedly as we’d all shut ourselves inside — suddenly outdoor gatherings were back on the table. The rental company that provided a sterilized bouncy house for our twins’ tiny birthday gathering on June 20, was so delighted to have a client at all that they let us keep it for nearly a week.

I should mention that Covid is not my family’s first rodeo in terms of social distancing and extreme health-related stress. In 2011, our twins were born at just 23 weeks gestation, weighing 1.5 pounds each and requiring ventilators for about six weeks. We spent their first year isolating in Maplewood, N.J., awash in sanitizer, with pulse oximeters hanging from our necks, masking when needed and keeping them — and ourselves — out of circulation until their lungs had recovered from the damage caused by the ventilators before getting exposed to the typical childhood respiratory infections.

The experience taught us a lot about tolerating limitations and making the most of every easy moment that we could, so by July 2020, with daily Covid infection rates low, we were looking for pandemic silver linings. We loaded Flecha, our 5-month old Covid puppy, and ourselves into our van and zigzagged across Spain — from Cádiz at the southernmost tip to Asturias on the northern coast.

One place we didn’t plan to go last summer was the United States, by then the world leader in Covid cases and where outbreaks in Sun Belt states like Florida and Texas forever crushed the fantasy that the virus would disappear in warm weather.

My parents, who live in New Jersey, are in their late 80s and my children under 10, so we try to bring them together often, and we kept optimistically booking tickets last year in case the pandemic suddenly abated. But as international restrictions took hold, all of those flights were eventually canceled by the airline.

In the meantime, many friends in Spain had gotten sick, but thankfully most recovered. Then in early August, we lost a wonderfully gregarious friend who, at 52, was somehow gone just nine days after his diagnosis. A couple of similarly startling deaths followed and it was like the music stopped — we reverted almost to lockdown protocols, which was maybe a good thing since autumn brought a new wave of infections that has barely ebbed since.

From the outset my greatest fear was that my husband and I, who both have underlying health issues, would get seriously ill at the same time, with no relatives in Madrid to care for our kids. Thus we’ve been vigilant — only meeting people outdoors and doing lots of home testing — an area where Spain is way ahead of the United States.

All of this was in the background at dinner one night in early March when we wondered if it was time to cancel our tickets to New York for spring break at the end of that month. The United States was then still registering massive daily infections, but also setting daily records for vaccines administered.

We’d previously accepted we might not be able to go until 2022 or later, but after thinking a bit, I said: “Whenever we’re able to get vaccinated, I would go.”

One Saturday morning about a week after that dinner, we caught a pharmacy website just as it was being refreshed; dozens of appointments were available in New Jersey, some the very next day. We decided to pull the trigger. As the kids would be off school, we brought them. We didn’t want be on opposite sides of the ocean during a pandemic, and we also wanted them to see — at whatever distance — their grandparents, aunts, uncles and cousins after 15 months apart. 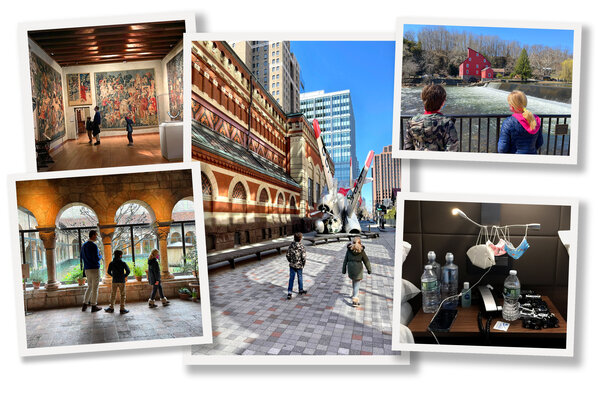 Boarding the plane for New York, I was still concerned this would be a perilous journey, but as I watched my children compete to see who was better at wiping down the surfaces around their airplane seats before connecting their headphones and debating which movie to watch first, my expectations of a “Fall of Saigon” siege-like travel experience began to fade.

Our Iberia flight felt very safe. Airline staff and passengers — all 50 of them, recently tested and scattered around the plane’s 400 seats — were vigilant about mask wearing. Flights were rigorously boarded back to front (and disembarked front to back) three or four rows at a time so there were no bottlenecks. New protocols for meal service were expeditious, with neither flight attendants nor any other passengers lingering in the aisles.

Once on the ground, we were struck by how altered New York City — where I lived from 1992 to 2002 and visit often — seemed. Friends had warned us that many residents had left, but I wasn’t prepared to see so many boarded-up storefronts and empty Midtown sidewalks. Everything and everyone seemed a little adrift. We soon got a taste of the city’s old rhythm, but compared to Madrid — where, to be fair, the weather is far more conducive to outdoor dining and boutiques and galleries are all open — it felt completely shut down.

With our busy P.C.R. testing schedule (every two or three days to coordinate with our flights), we could limit our quarantine time but wanted to stay outside and did not make many plans to visit people beyond close family and friends.

One drizzly morning after getting our P.C.R. results, we figured everything outdoor and kid-friendly in midtown Manhattan would be crowded, so we headed north to the Cloisters — the Metropolitan Museum’s medieval outpost overlooking the Hudson River. While it seemed ironic to fly to America to see Medieval Europe, there were pretty, early spring flowers blooming in the gardens and our unicorn-loving daughter fell in love with the famous Unicorn Tapestries.

From there we shot up to the Bronx, to the vast Van Cortlandt Park, where the kids chased geese and sea gulls, and a gorgeous colonial manor house stands at its center with surprisingly cheerful 18th-century interiors.

We called a friend who grew up in the Bronx who sent us to City Island where, on a chilly terrace over the water, the twins ate burgers, and my husband and I consumed our body weight in crab cakes, broiled shrimp and scallops.

In New Jersey, our first stop was to get our shots at a pharmacy. The parking lot was packed, but inside there were only two people waiting ahead of me and I was back in the car in under 30 minutes. It was such a low-stress moment that the feeling of relief at getting the first shot took a while to sink in.

After that we shuttled between outdoor family visits, initially still somewhat clenched and hesitant. My father and his wife had a well-rehearsed routine for driveway visits with folding chairs and blankets. To our children’s delight one visit coincided with the Easter Bunny’s drive by with the local fire department.

Encounters at my sisters’ houses often involved the grown-ups moving their chairs across the lawn to follow the warming rays of the sun, as college-age nieces tirelessly chased our tireless kids. This family time went a long way toward unspooling the anxiety that has wound its way so tightly into all our lives over the past 15 months. We even considered remaining in the country through our second doses, but we didn’t want the kids to miss their classes.

And so, three weeks later, we repeated the entire scenario again. Rather than being exhausted by the packing and the flying, we savored the novelty of traveling again.

The two-trip undertaking was not inexpensive: We used a combination of airline miles and cash for the flights and some year-old hotel vouchers, which, when applied to 2021 rates, got us junior suites that sleep four for about $50 per night. Our inbound flights arrived quite late and there was no hotel dining or room service, so we foraged our in-room breakfasts from nearby drugstores the night before.

Vaccinations aside, the greatest gift after 15 months away was seeing family and friends in person — even if we were standing 10 feet apart on a driveway.

Last autumn, we lost someone very dear to our family — not to the pandemic but to old age (96) in the midst of it. To my surprise, as we were starting to say goodbye to family on our second trip, it was our 9-year-old daughter who spoke up and asked if we could visit Aunt Fran at the cemetery “to say goodbye and maybe take her a drawing.”

With one gesture, our little girl showed us just how much our kids had matured in an upside-down world when it sometimes felt time had stood still.