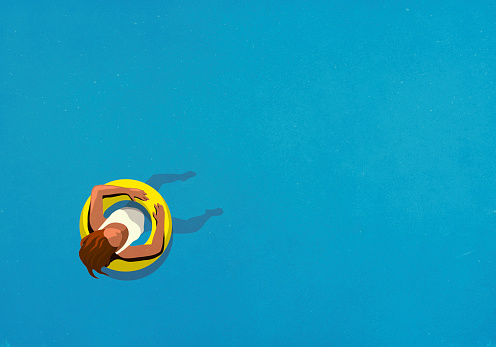 I caught a horrifying glimpse of myself in the mirror, standing half naked in my hotel room with my arms contorted like some sort of Victorian optical illusion.

I was desperately trying to apply sunscreen to my back – not really the image of chic serenity that I’d envisioned for my first solo holiday.

For a long time I idolised solo holidays as the pinnacle of sophistication. They seemed like the embodiment of being a proper adult: being someone who not only enjoys their own company, but also knows where their passport is. Wow!

You’ve probably met someone who has waxed lyrical about the benefits of a solo trip. It seems people who enjoy solo travelling are also big fans of banging on about just how good solo travelling is. I couldn’t help but think, perhaps they wouldn’t have to go on all these holidays on their own if they found something else to talk about for once.

And maybe I was jealous. Travelling alone seemed completely impossible for me. I couldn’t imagine anything more terrifying than being alone. Not only am I very extroverted, I’ve also got a poor sense of direction, no foreign language skills and a worrying ability to fall over while standing still. The prospect of me taking a solo holiday would end up like a Gen Z Mr Bean remake.

Plus, solo travelling was never on the cards. I’d spent most of my early twenties in a relationship, and what is a partner if not someone to split an Airbnb with?

When that relationship ended in mid 2020 (for reasons other than my Airbnb philosophy), everything changed. I was alone for the first time since moving to London. I did all the classics: cut myself a fringe, bought a cat off Gumtree and booked a solo holiday.

Despite my previous fears about spending time with my own thoughts, I finally saw the prospect of ‘alone time’ as somewhat appealing, mainly because I’d just spent the majority of the lockdowns in a small flat with two couples. More specifically, I saw the appeal of ‘alone time where I can’t hear other people getting intimate in the room next door’.

So I picked the location: Greece! Who knew what could happen? Maybe I’d have the time of my life? Maybe I’d make friends? Maybe I’d have unprotected sex in quick succession with three different men, and my daughter would invite them all to her musical wedding to find out which of them is the real father? Maybe.

None of those things happened. Which was a shame, as I imagine Colin Firth would apply sunscreen with a real gentle touch.

I spent a week on my own, reading, eating and trying to figure out how to style my terribly cut fringe. And it was fine. It turned out the fear of my own company was far, far greater than the reality of it. I get on well with myself! We like ALL the same things.

But the trip was not the groundbreaking experience that I’d expected it to be. I thought the tricky thing on a solo holiday would be finding myself, but it’s actually finding a way to get SPF on your back.

I did Google it, by the way. The internet advised me to squirt sunscreen onto some cling film (!) and rub that over my back. If I saw a person doing that on the beach, I wouldn’t think ‘Wow, what a clever solo traveller’, I’d think, ‘Wow, they’re having their mental breakdown in public!’

So, in the end I settled on a strict regime that never exposed my back to the sun. I may not have had an even tan, but at least I had my dignity.

But it wasn’t just the sunscreen issue: I found the logistics of my solo holiday draining. There are so many questions: where do I eat? What should I do? How do I present this as fun on social media so no one doubts my choices?

As someone who will spend the length of a film deciding which film to watch, decision making is my personal hell. It was non-stop, and there was no one else to blame for any bad ones I made.

I didn’t regret taking the trip. It was a useful experiment. I came home feeling rested and relaxed, but mostly just really excited to talk to someone other than The Devil Incarnate (my pet name for the Duolingo owl).

Since then, I’ve attempted a few more solo trips around the UK, helped by the fact that I travel around a lot for my job as a stand up comedian. I thought it was just a matter of getting used to it. But I just don’t like it. I’ve done my time and I am firmly Team Holidays With Friends (or lovers, or a random man called Jim that you find outside Terminal 3. I’ll take anyone).

Society really promotes the virtue of being alone. Self care is often seen as a solo act, almost as if the more solitude something requires, the more healing it will be for you. And alone time can be a great thing! You should absolutely be able to spend time on your own and enjoy it without purchasing an animal off Gumtree. But it isn’t the only valuable use of your time.

The way you unwind depends on your needs. When I went to Margate with a couple of friends, we chatted into the early hours of the morning and laughed non-stop for a week. That did much more for my soul than any of my ‘Eat Pray Love’ alone time – and I only had to pick where we went for dinner once. Ultimate relaxation.

I’ve made peace with the fact that solo holidays just aren’t for me. So I’m looking forward to my summer holiday in New York with my best friend Emily, for a week of laughing, chatting and applying suntan lotion to each other’s backs.

See Ania Magliano: Absolutely No Worries If Not at the Pleasance during the Edinburgh Festival Fringe from 3-28 August. For more information and tickets visit www.edfringe.com or www.pleasance.co.uk