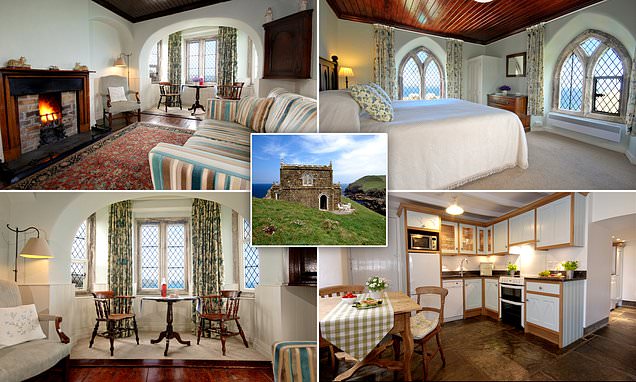 A former ‘den of iniquity’ that has been turned into a cliff-top romantic retreat is so popular it is booked up for the next 18 months.

Doyden Castle, near Port Quin in Cornwall, was built in the early 19th century by a local landowner as a secret bolthole for gambling and drinking in with friends.

The National Trust was bequeathed the folly along with 40 acres of land in 1956. 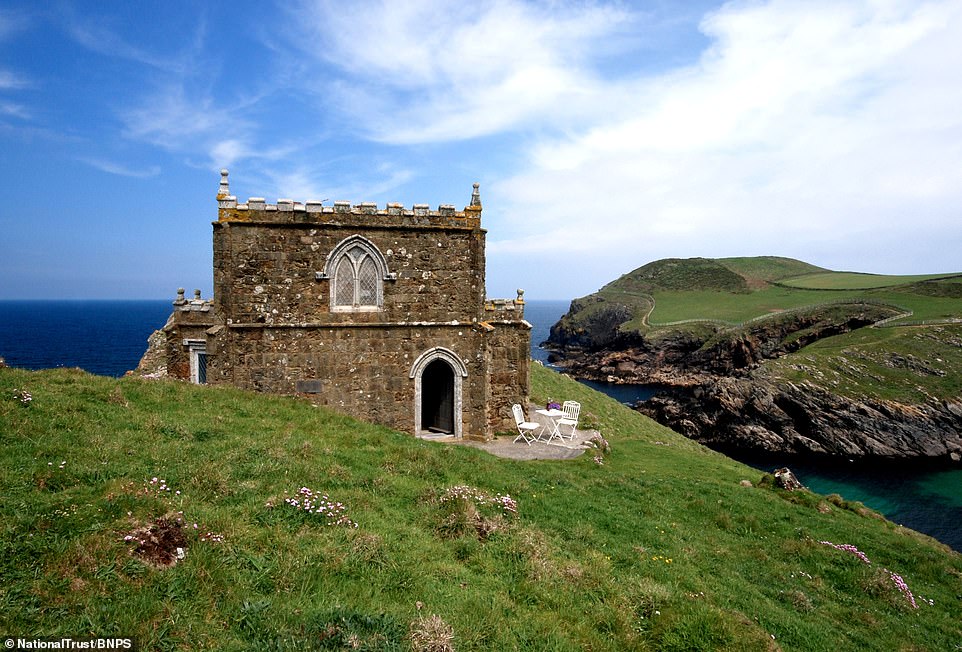 Doyden Castle, near Port Quin in Cornwall, was built in the early 19th century by a local landowner as a secret bolthole for gambling and drinking in with friends but is now a popular romantic retreat

It was converted into a very basic holiday let with no electrical connection and no bathroom.

But since then the property has been refurbished and upgraded and is now a popular destination for couples.

It can only sleep two people but its spectacular location and panoramic views of the Cornish coast ensure it is a hit all year round.

Prices range from £471 for two nights off season to £1,621 for a week in peak season. The quirky property is fully booked until July 2020.

Tracey Mortimore, from the National Trust, said: ‘Doyden Castle is neither a castle or a folly really.

‘It was built for gambling, drinking – a sort of den of inequity – but it’s on a headland and the view is absolutely stunning. 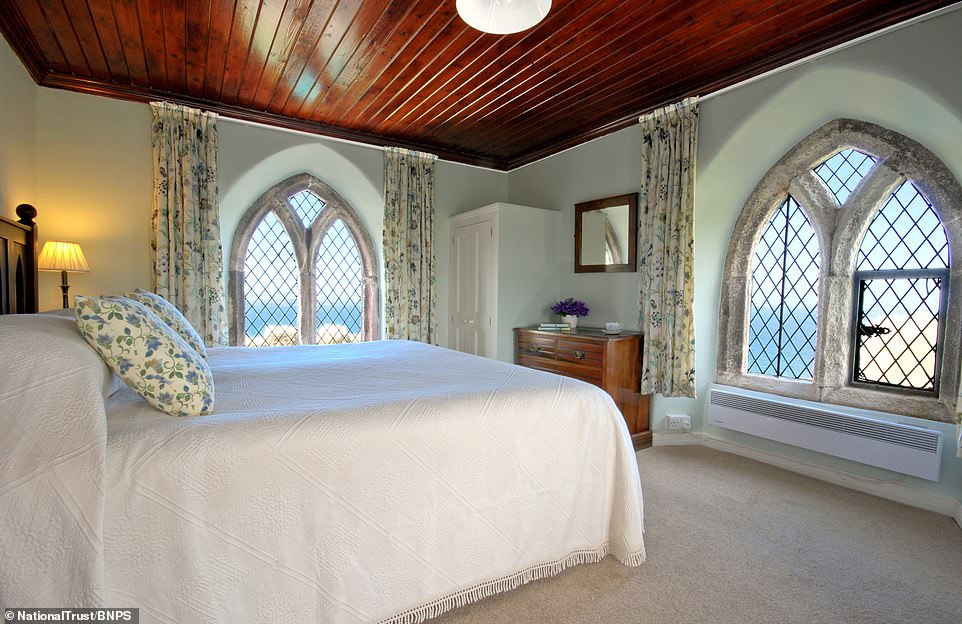 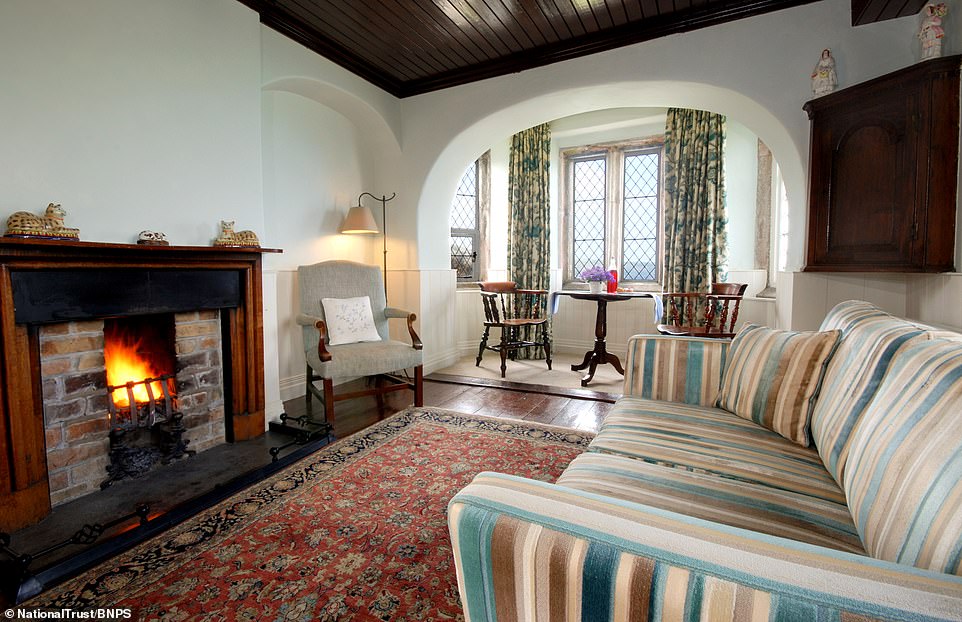 ‘When you enter Doyden you cannot help but gasp, it’s possibly the most stunning part of the north Cornwall coast.

‘To one side you’ve got the hamlet of Port Quin. It’s like a little miniature fjord and it is absolutely beautiful.

‘To the other side it goes round to Pentire Head with breathtaking scenery.

‘It’s very successful, and every single stay helps keep it special for ever, and contributes to the care of other National Trust places. I think it’s the scenery that makes it so popular. 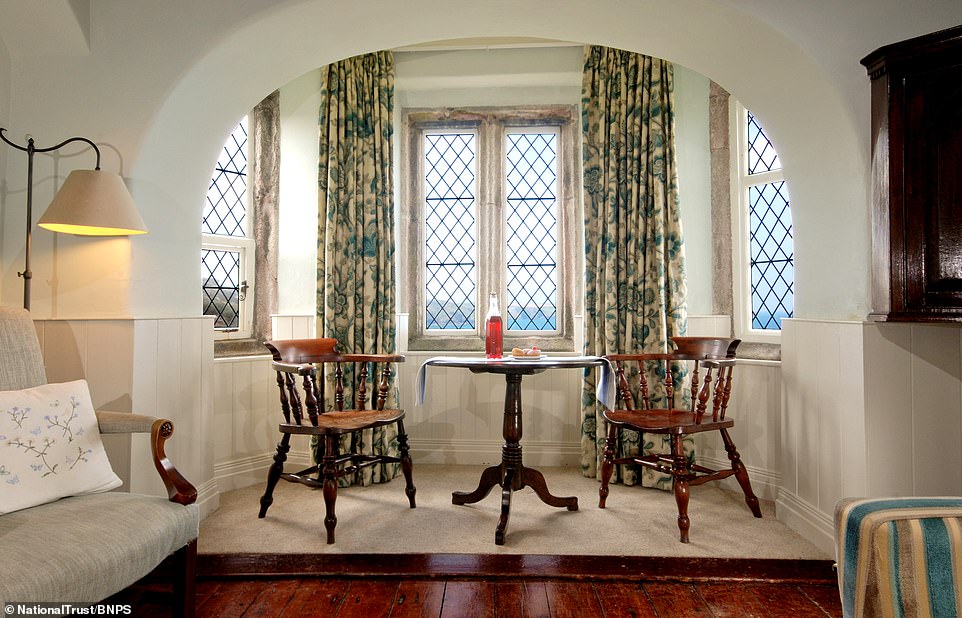 The ground floor of the historic building has a living room and dining area. The bedroom is upstairs on the first floor 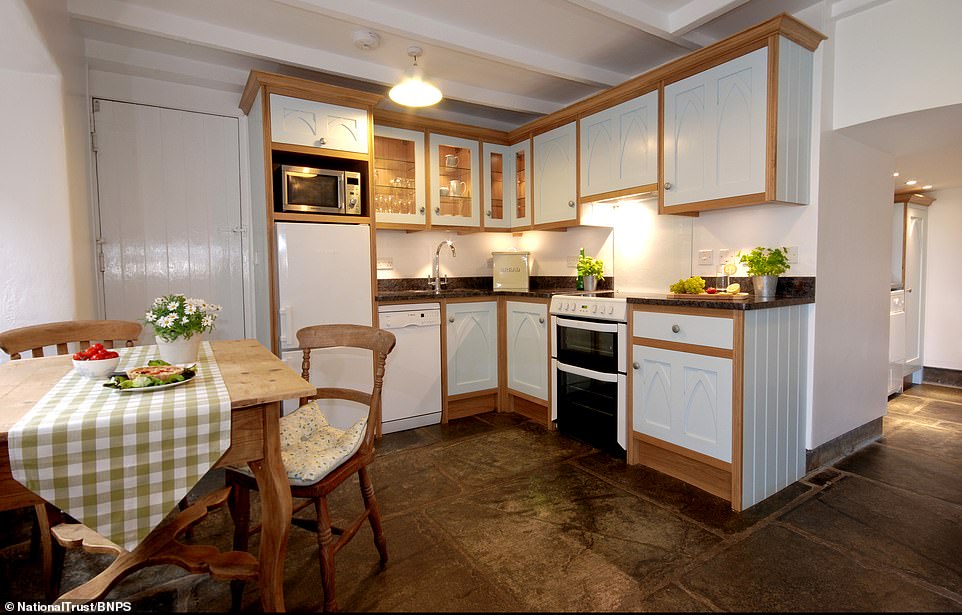 ‘People come time and time again. They love the uniqueness and the location.

‘It’s definitely somewhere people go for an escape. And I think it’s a little bit down to the Poldark and Doc Martin connection.

‘It’s definitely the best performing holiday let in our North Cornwall portfolio and I think it’s probably the best two-person letting on the national portfolio too.

‘It’s long been known as the trust’s flagship holiday property.

‘The money from every booking helps look after Doyden for future generations and contributes to the conservation of other special places too, like maintaining coastal paths.’

The cellar floor of Doyden Castle has a kitchen/diner, utility room, shower room and separate toilet, the ground floor is a sitting/dining room and there’s a double bedroom on the first floor. 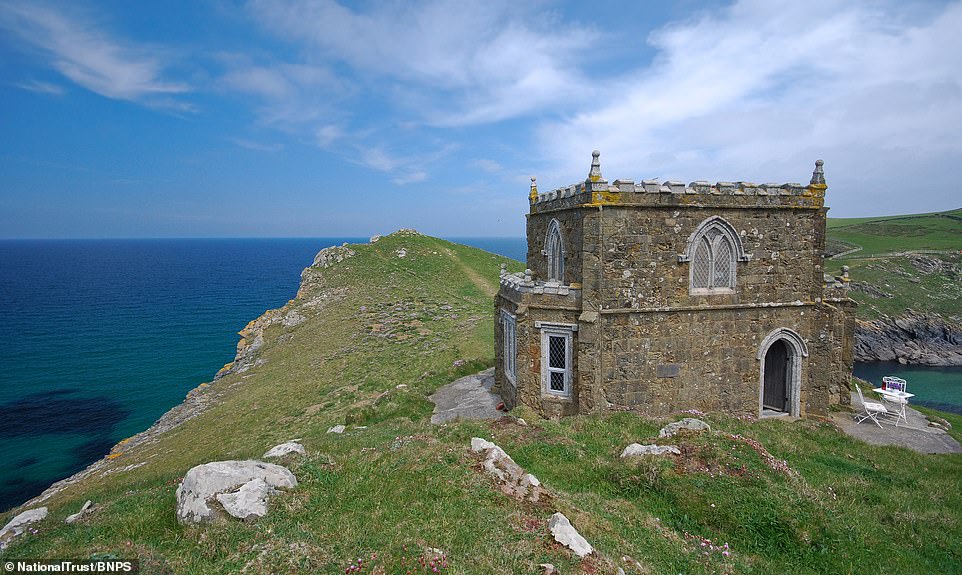 Prices range from £471 for two nights off season to £1,621 for a week in peak season. The quirky property is fully booked until July 2020

It has mod cons including fridge, freezer, microwave, dishwasher, washing machine, tumble dryer, TV and DVD player but no WiFi or telephone, with the nearest access at nearby Doyden House.

The South West Coast Path runs past the front door and can take visitors to Port Isaac.

Doyden Castle has been used for TV shows too, which attracts more visitors to want to stay.

It featured heavily in an episode of Doc Martin, the finale of series five, when the village pharmacist Mrs Tishall takes Doc Martin’s baby to the tower, known as Pentire Castle in the show, to woo the doctor.

The tower was also used in the original 1975 Poldark series as Dr Dwight Enys’ house and appeared in several scenes.