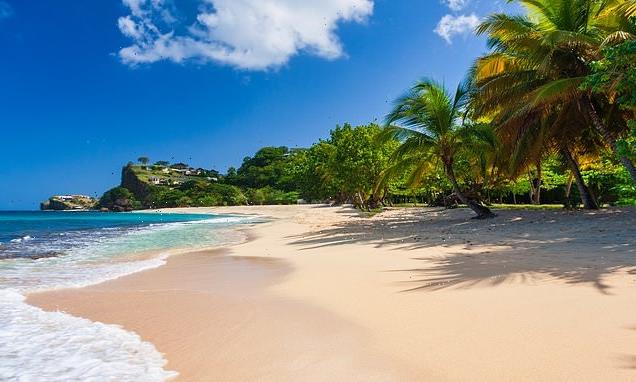 Greedy for Grenada: Finding life is sweet on the Caribbean island as we eschew its golden beaches… to luxuriate in its luscious chocolate

A few years ago a rumour began to circulate that by 2020, the world would run out of chocolate. Thank goodness it didn’t happen, and in fact in the Caribbean the reverse has come true with a revival of the cocoa industry and an explosion in chocolate manufacturers.

Jamaica was the main supplier of the chocolate and coffee houses in Britain in the late 1700s but before that Grenada, then a French colony, was the world’s biggest producer of cocoa. Not bad for an island just 12 miles by 21. However, as Europe found its sweet tooth and other plantation centres thrived, the Caribbean chocolate market went into decline.

Now the biggest revival has taken place in Grenada, where half a dozen independent chocolate-makers are booming and the island exports fine-quality cocoa beans. 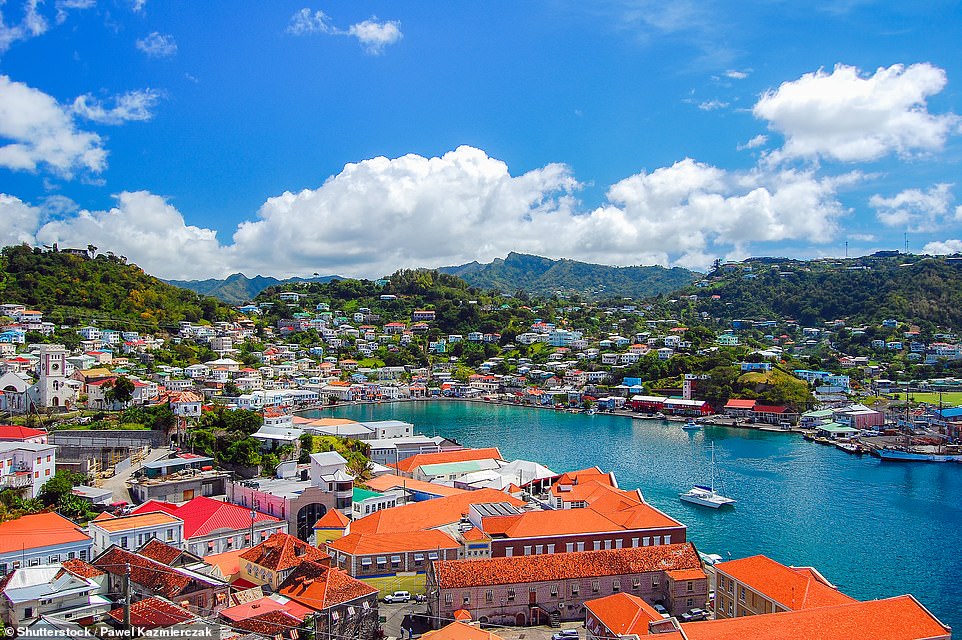 Booming: A revival of the cocoa industry has taken place in Grenada after a period of decline. Pictured is St George’s, the island’s capital

If you’re on holiday here, it’s worth taking a day away from its glorious beaches such as Morne Rouge to visit a chocolate estate, to see the cocoa walks and partake in a tree-to-bar experience. Grenada even has a chocolate festival, held in mid-May, after the winter season ends, when hotel prices are lower and the weather is still not stifling.

The festival is four days of tasting lessons and talks about the three main cocoa beans – the two used in Grenada are the criollo and trinitario beans. You can sign up for practical chocolate-making sessions and estate visits. The island micro-brewery even lays on a range of chocolate-flavoured beers. It all culminates in a ticketed gala dinner (no black tie required) in which all seven courses, from soup to dessert, contain cocoa or chocolate in bitter or sweet form.

As part of the festival, I join a group tour heading north, on the coast road that clambers over headlands and sweeps deep into huge bays, eventually reaching the cocoa estate at Crayfish Bay. Here we walk through the plantation. Cocoa trees stand 30ft high, their lustrous dark green leaves shining in the dappled sunlight. Above them soar shade trees, called immortelles but also known as ‘madre de cacao’ or ‘mother of cocoa’, whose orange blooms set Caribbean valleys aflame each January.

Estate owner Kim Russell describes the age-old process. Cocoa pods – yellow, green, brown, even scarlet – that sprout randomly from trunk and branches are harvested with a knife on a pole and broken open to reveal a tower of closely packed beans sitting in a delicious, sticky white pith. 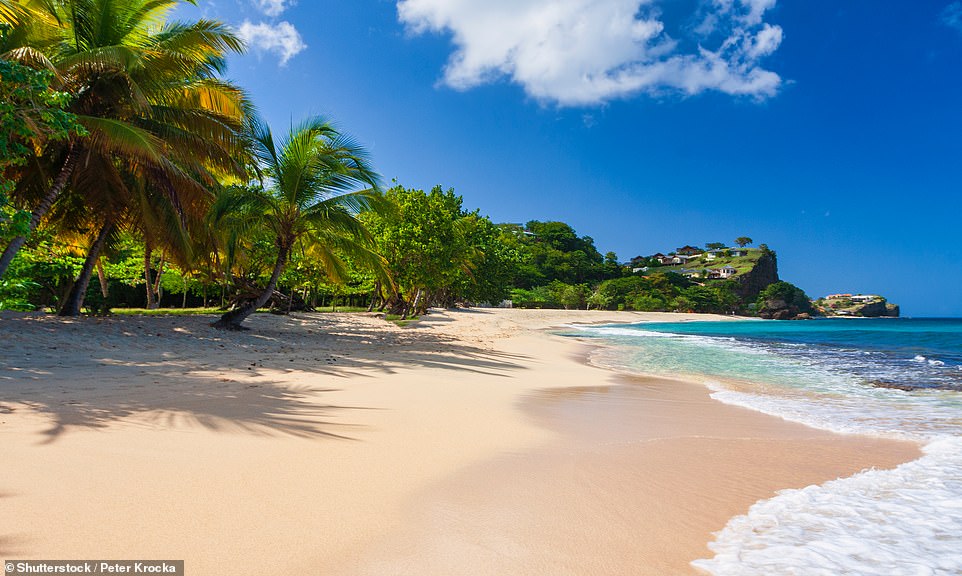 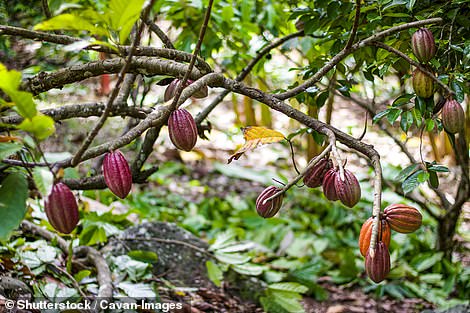 James attended the annual Chocolate Festival where visitors can learn about the three main cocoa beans. Pictured is a cacao tree

Back at the heart of the estate in a cluster of old buildings with red tin roofs, we see the beans bundled into wooden boxes and covered with banana leaves, where they are ‘sweated’ for several days to ferment away the pith. Then they are spread on to trays on runners known as ‘boucans’ to air-dry in the sun or pushed back under cover in case of rain. We take turns to ‘dance’ the beans, shuffling through them barefoot so they dry evenly.

The final stage is roasting. Kim turns a cage of beans over charcoal embers. They give a distinctive, smoky flavour to his (mostly 75 per cent dark) chocolate.

The Chocolate Festival was created by Magdalena Fielden, a Grenada resident, originally from Mexico, who bases the event at her hotel, the True Blue Bay resort, in the south-west of the island. She gives talks on cocoa’s Mayan origins as currency and how its bitter flavour is key in Mexican cooking.

Next morning I head to the Belmont estate where Grenada’s chocolate resurgence originated. At the new factory and visitor centre, we watch the process. After roasting, the beans pass through a sequence of aluminium vats where they are winnowed (husks separated from beans), melanged (ground down and mixed with cocoa butter and sugar, also flavouring) and then conched (more turning, to remove volatile flavours and get the right texture). The luscious, silky result is poured into moulds and cooled.

Belmont makes a variety of bars besides 75 per cent dark chocolate, flavouring them with nutmeg and sea salt, and even ‘Oil Down’, after the Grenadian national dish of salted meat and vegetable stew. 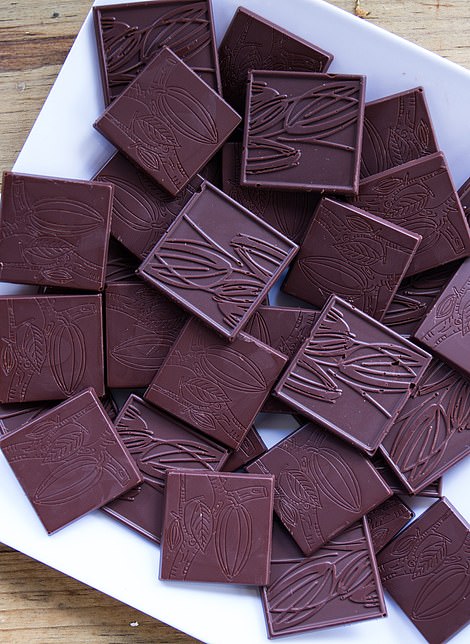 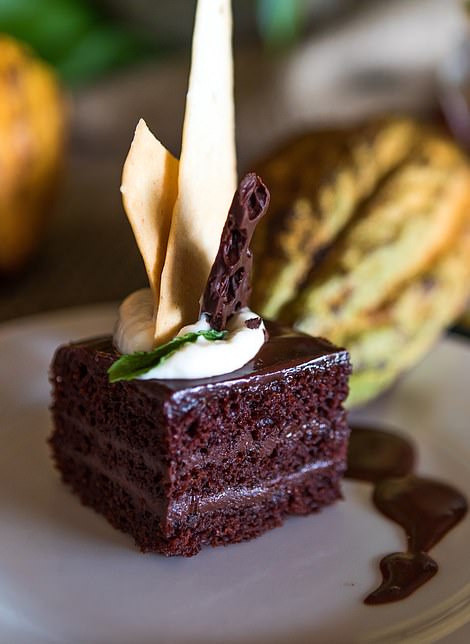 Chocs away: A Belmont creation at the chocolate festival (right) and chunks of the island’s speciality (left)

The second was a take on Grenadian street food, with chicken mole tacos, bitter chocolate pork ribs and cocoa nib-crusted grilled fish – and a jump-up (party).

The True Blue dock bounced to dancing late into the night.

James Henderson was a guest of the Grenada Tourism Authority. The chocolate festival (grenadachocolatefest.com) is from May 13 to 18. Virgin Atlantic (virginatlantic.com) flies to Grenada three times weekly from Heathrow via Barbados.