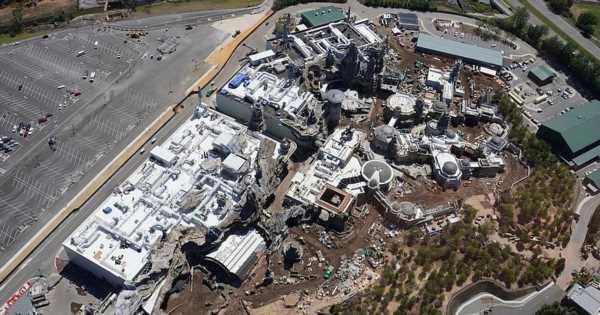 Calling all Star Wars fans! It's time to start saving up your pennies as Disney 's new world is almost ready, and you're definitely going to want to visit.

Star Wars: Galaxy's Edge will open at the Orlando site in August, and new aerial shots show work is well and truly underway.

It has reportedly cost $1bn, which is around £773m, and covers an incredible 14-acre area.

The photos show many recognisable Star Wars buildings and the scale replica of the Millennium Falcon.

As well as lots of exciting new rides, the land will also have lots of themes restaurant.

The land will be based on the planet Batuu and will be a fully immersive experience. Staff will be Batuu's residents; smugglers, bounty hunters and adventurers.

The website states: "On the edge of the galaxy, between the Unknown Regions and Wild Space, there is a long-forgotten planet named Batuu.

"Now you are invited to visit this beautiful and treacherous village of secrets, built upon secrets.

"Drop by the local cantina to sample the indigenous beverages and curious concoctions. Chat with the locals, and meet travelers from across the galaxy. Wander a street market filled with rare and unusual artifacts… and more than a few hidden treasures.

"Answer a call from local “business man” Hondo Ohnaka to deliver hard-to-find items to a particular clientele aboard a ship in his employ, the famous Millennium Falcon.

"After your flight, join up with the Resistance on a secret mission that may find you trapped deep inside the belly of an imposing First Order Star Destroyer."

The company is also building a Star Wars land at the California site, which will open in the next few months.

Disney bought Star Wars in 2012 and has released a number of movies since including Solo: A Star Wars Story.