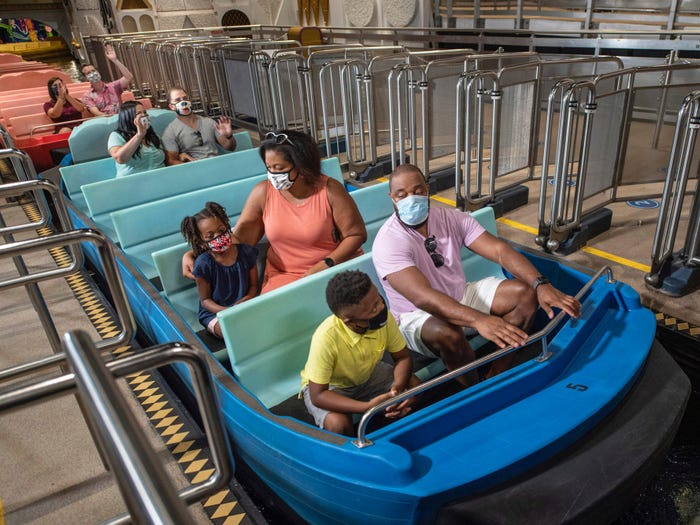 Disney World is seemingly backtracking a recent photography protocol it was testing.

In a statement shared with WDW News Today, a representative for the Orlando, Florida, theme park said it will no longer edit digital face coverings onto the faces of parkgoers who remove their masks for on-ride photos.

"In response to guest requests, we tested modifying some ride photos," a Disney World representative told WDW News Today. "We are no longer doing this and continue to expect guests to wear face coverings except when actively eating or drinking while stationary."

WDW News Today originally reported on Wednesday that a man named Tony Townsend shared a photo of parkgoers on the Animal Kingdom ride Dinosaur to a theme-park Facebook group. The photo, which was reshared by the publication on Twitter, showed a parkgoer in the last row of the ride's vehicle with what looks like a digital mask across their face.

Disney World previously enforced its face-covering rules by not allowing maskless riders to purchase ride photos that showed them without masks, according to WDW News Today. But because some ride vehicles allow for multiple groups to ride together, that meant those who did wear masks could not purchase their photos either if one person removed theirs.

Though the theme park didn't explicitly say why it will no longer edit face coverings onto maskless parkgoers, many Disney fans previously noted that the effort could be dangerous, as it essentially allows people to face minimal consequences for removing their masks mid-ride.

Some even argued that Disney World should remove visitors who don't follow mask rules instead as they could potentially spread COVID-19.

It's currently unclear what exact consequences parkgoers will face, if any, for removing their masks during rides.

Representatives for Disney World did not immediately respond to Insider's request for comment.