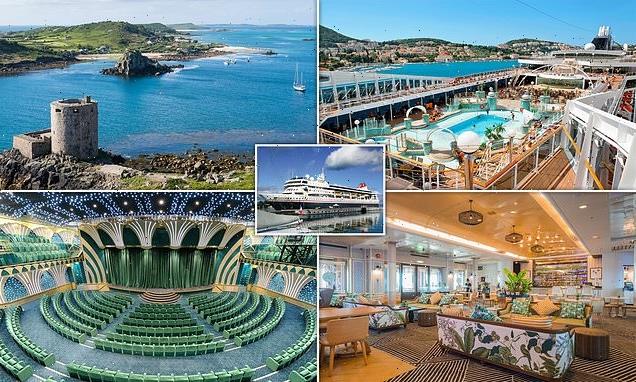 Rule the waves again! The pandemic curtailed cruising overseas, but now sailings around the UK are booming – and there’s a world of adventure to discover (on magnificent ships)

Who would have thought that it would take a pandemic to discover Britain’s coastal treasures? When cruise ships on domestic-only voyages set sail earlier this summer, no one knew what the reaction would be.

But they struck a chord, attracting many curious first-time cruisers. Cruises around the UK are not new, but these departures offered far more variety, with sailings along the South Coast to Land’s End or to Scotland’s Hebrides, showcasing epic scenery along rugged shorelines of dramatic cliffs and peaks.

Maritime cities such as Liverpool, Plymouth and Belfast took centre-stage, winning a new legion of fans. So if you missed the boat this year, don’t despair. Here’s a selection of cruises in 2022 offering the best way to explore the British Isles by sea. 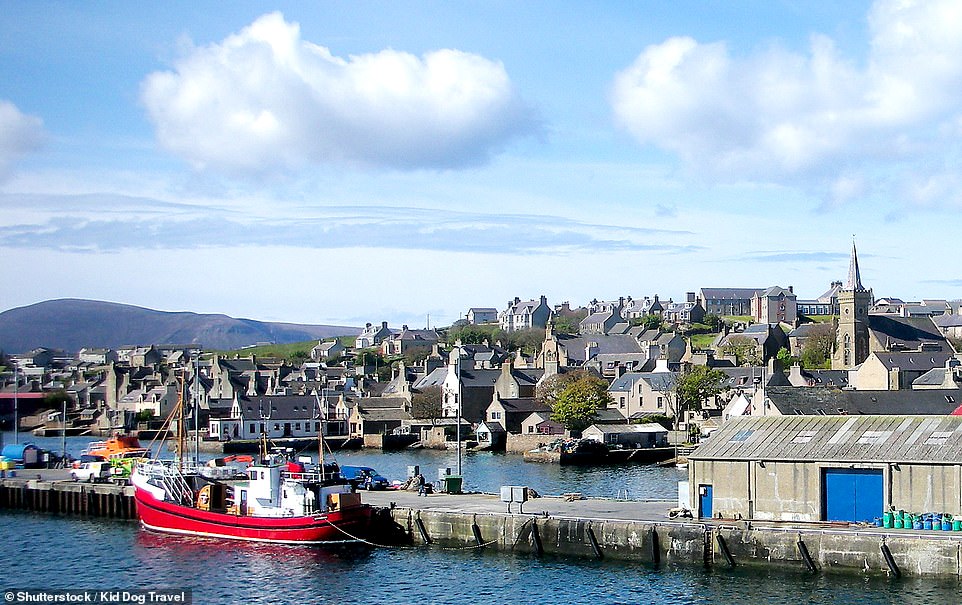 Norwegian’s Southampton-to-Amsterdam cruise stops off at Kirkwall, the capital of the Orkney Isles, pictured

Step into the land of Robert Burns and Braveheart on a ten-night Norwegian Cruise Line voyage that brings the Caledonian spirit alive. Stroll along Edinburgh’s Royal Mile to admire Georgian architecture and go monster-spotting at Loch Ness from Inverness.

Further north lie the Orkney Isles, where Norse ancestry adds a twist to the capital, Kirkwall, whose 12th-century St Magnus Cathedral, built by the Vikings, is the most northerly in the UK. 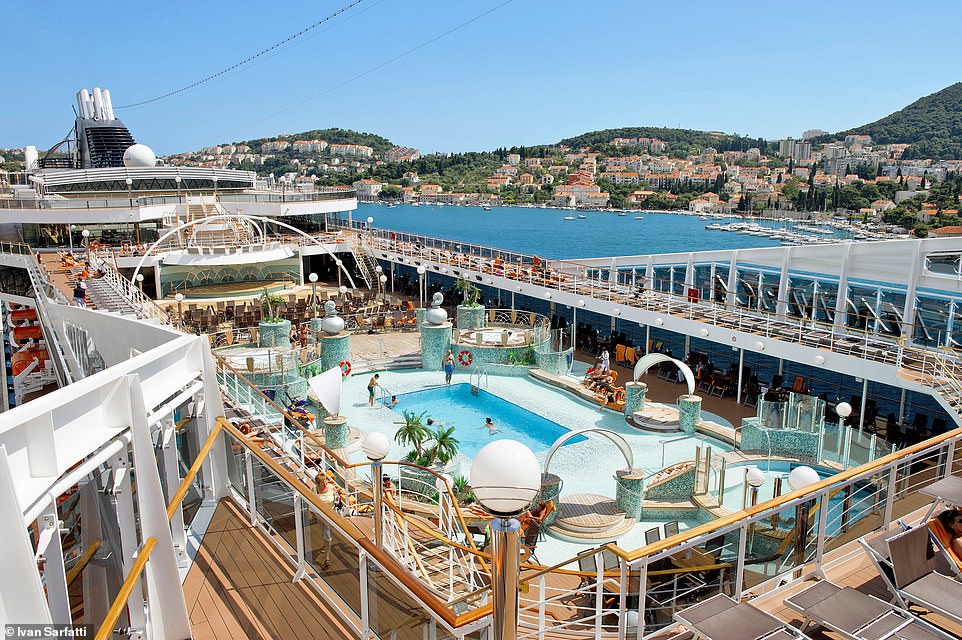 Mini-break: Revel in the ‘glitz’ of the MSC Magnifica (pictured), which offers a two-night sailing to Guernsey from Southampton 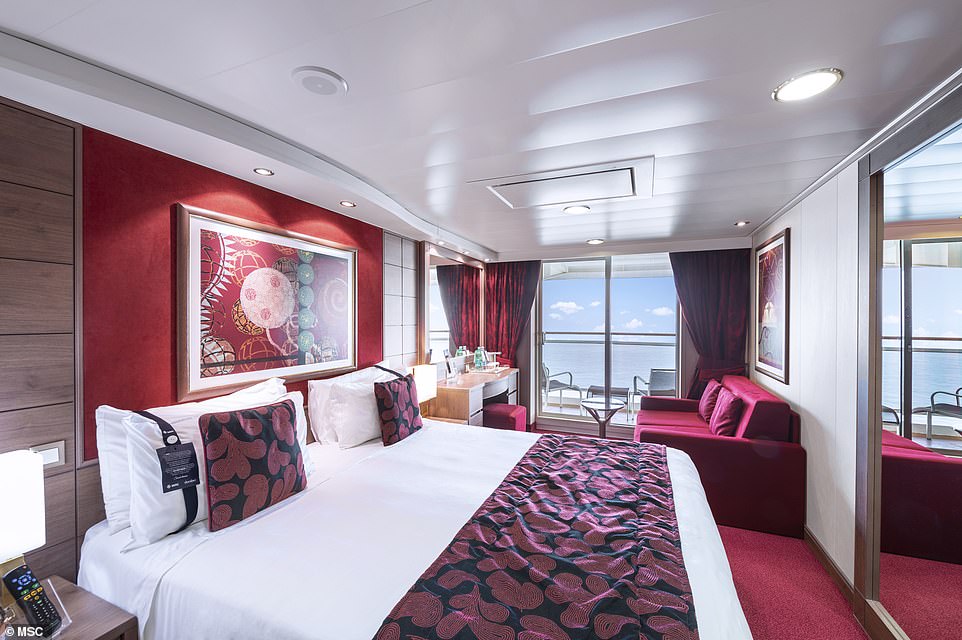 A room aboard the MSC Magnifica. While out at sea, it’s worth checking out the ship’s 12 bars and lounges 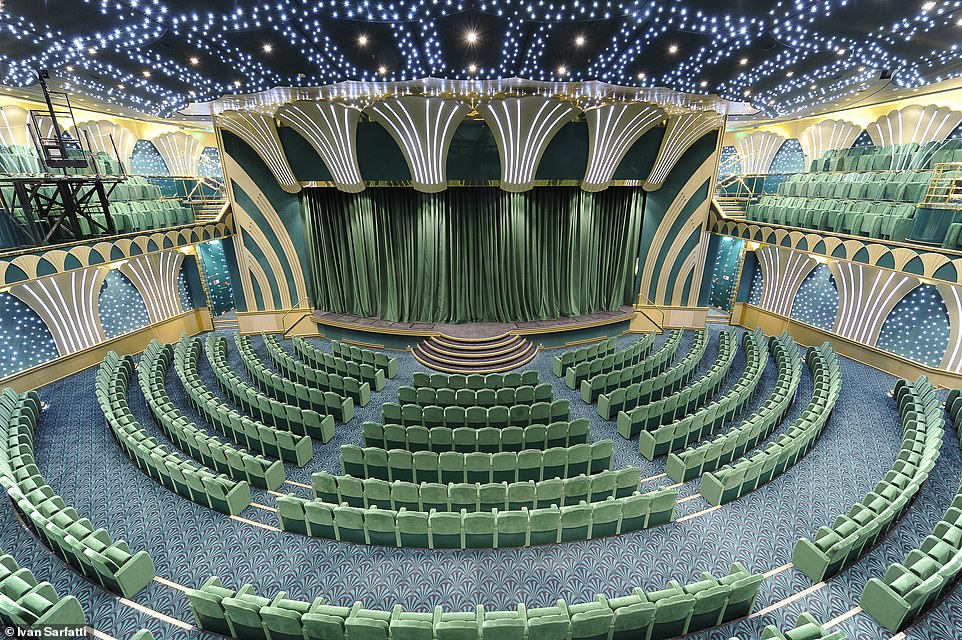 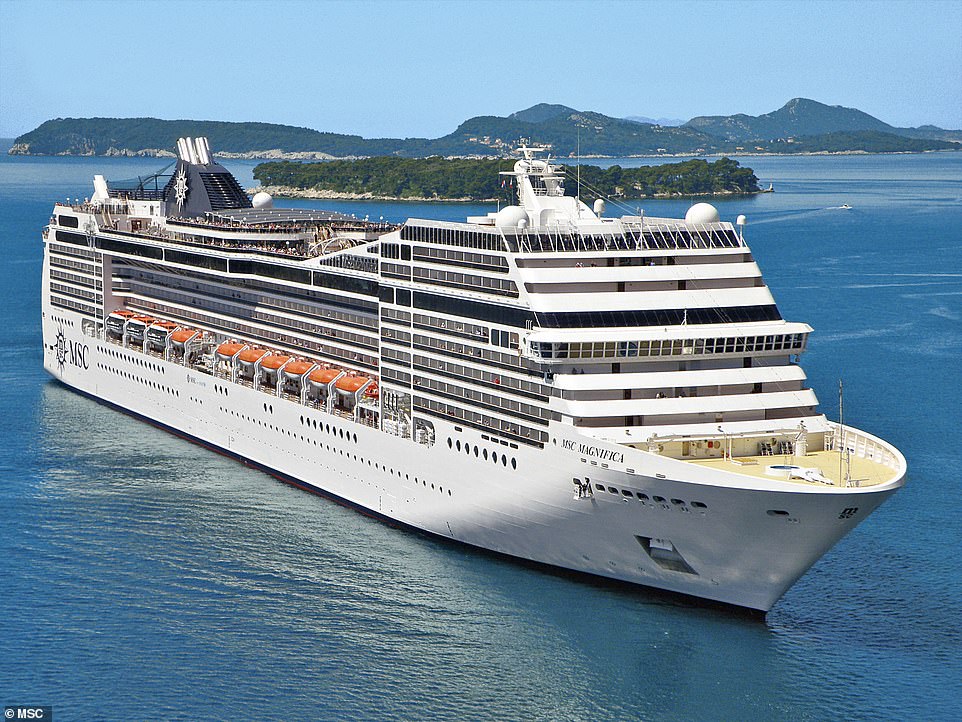 This two-night mini-cruise to Guernsey is ideal for first-timers wanting to gain their sea legs, while revelling in the glitz of MSC Cruises’ ship, MSC Magnifica.

Explore Guernsey’s cobbled capital St Peter Port and delve into the island’s seafaring past at the Maritime Museum. Enjoy hedonistic heaven in Magnifica’s Balinese Spa, check out the 4D cinema and sample the ship’s 12 bars and lounges.

Tuck into a mouth-watering voyage on the 50-passenger Hebridean Princess, a former car ferry now styled as a floating boutique hotel previously chartered by the Queen for family holidays.

This gastronomic sailing brings out the flavours of Scotland’s islands with artisan cheeses on Mull; oysters and honey on Colonsay; plus seafood and seasonal game for on-board gala dinners and lunches in local restaurants.

Whisky fans can savour a wee dram on a tour of Islay’s Laphroaig Distillery, but a highlight is a champagne reception in 14th-century Duart Castle overlooking the Sound of Mull. 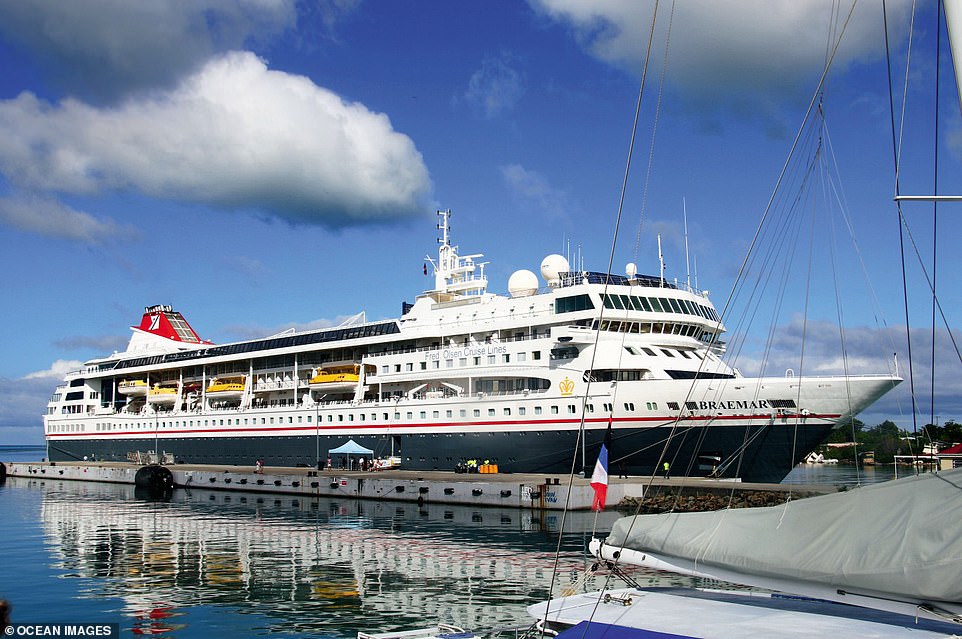 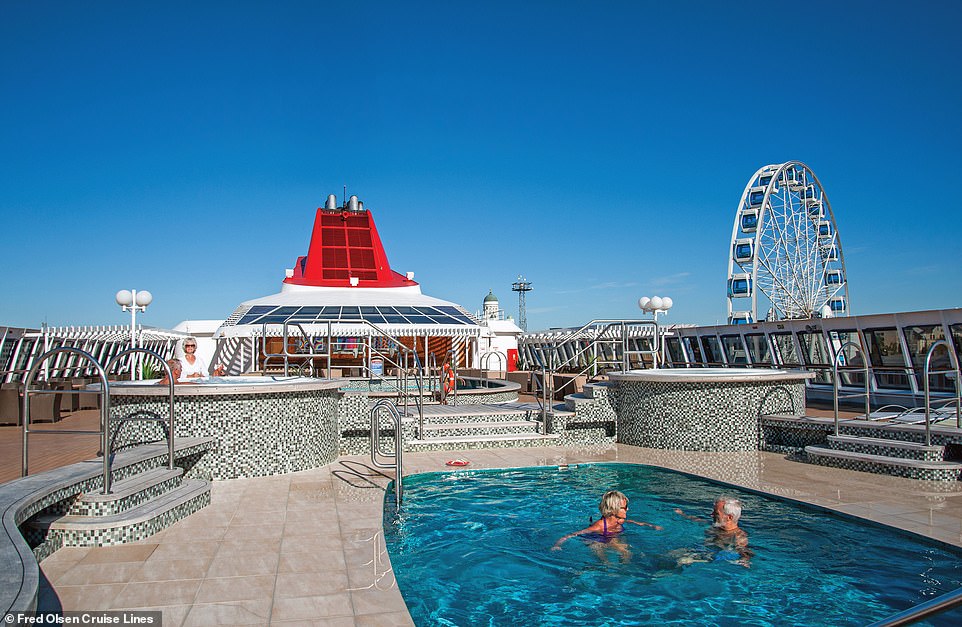 Prices for the mini-cruise start from £799 per person. Pictured is one of the swimming pools aboard the Braemar

Meander along the untamed coast of England’s south-west corner on this mini-cruise aboard Fred Olsen’s Braemar, which stays overnight in Falmouth Harbour — with views of Pendennis Castle — and offers the chance to visit the scenic Lizard Peninsula and the Eden Project.

Follow in the footsteps of explorers Sir Francis Drake and Captain Cook in Plymouth and take a well-earned break with a Devonshire cream tea or a tot of something stronger from Black Friars gin distillery, dating from 1793 and the oldest in England. 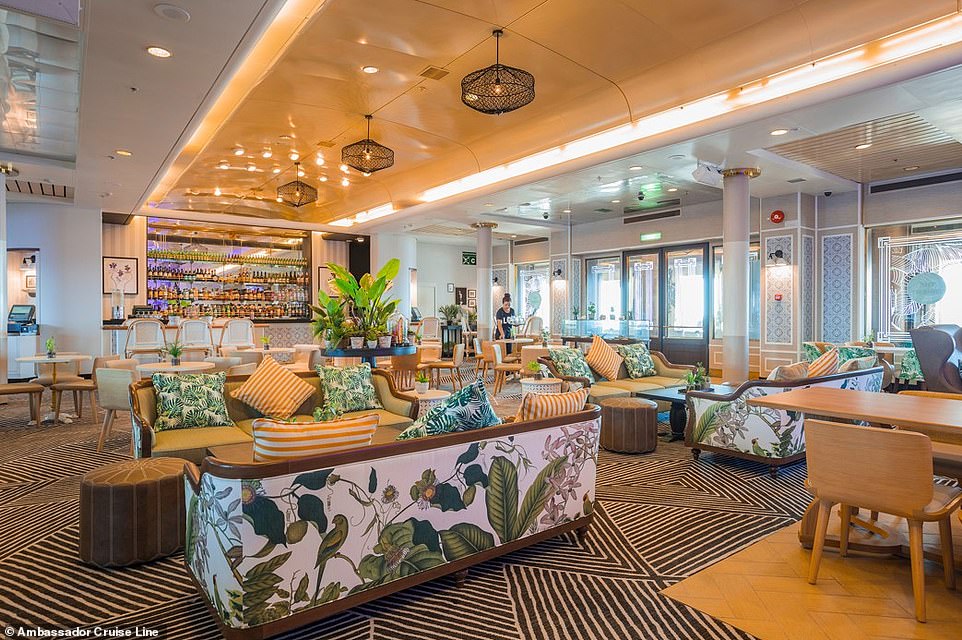 There’s a British feel to Ambience, with afternoon teas and gala dinners on offer. Pictured is the ship’s lounge

Mark the Queen’s Platinum Jubilee by sailing to the far-flung extremities of the realm she has ruled for the past 70 years.

This 12-night circumnavigation of the UK is a maiden season highlight of cruising newcomer Ambassador Cruise Line, formed earlier this year by the management team of the former Cruise & Maritime Voyages.

There’s a British feel to its 1,400-passenger ship Ambience with afternoon teas, gala dinners, a speciality steak restaurant and the chance to sink a pint in the Purple Turtle Pub.

Set sail: A Round Britain sailing from Tilbury, including Rosyth, Belfast, Scilly Isles and Guernsey, on May 26 costs from £1,219 pp (ambassadorcruiseline.com).

Swap the luxurious Seven Seas Voyager for a thrilling rib boat ride across Loch Broom and past tiny uninhabited islands dotted along the Scottish coastline to spot seals, otters and harbour porpoises.

This high-adrenaline diversion is staged from the Scottish port town of Ullapool, one of the more unusual stops on this British Isles cruise.

In Ireland, a visit to Dublin is followed by one to the Irish fishing port of Killybegs in County Donegal where the vertiginous Slieve League Cliffs are among the highest in Europe. 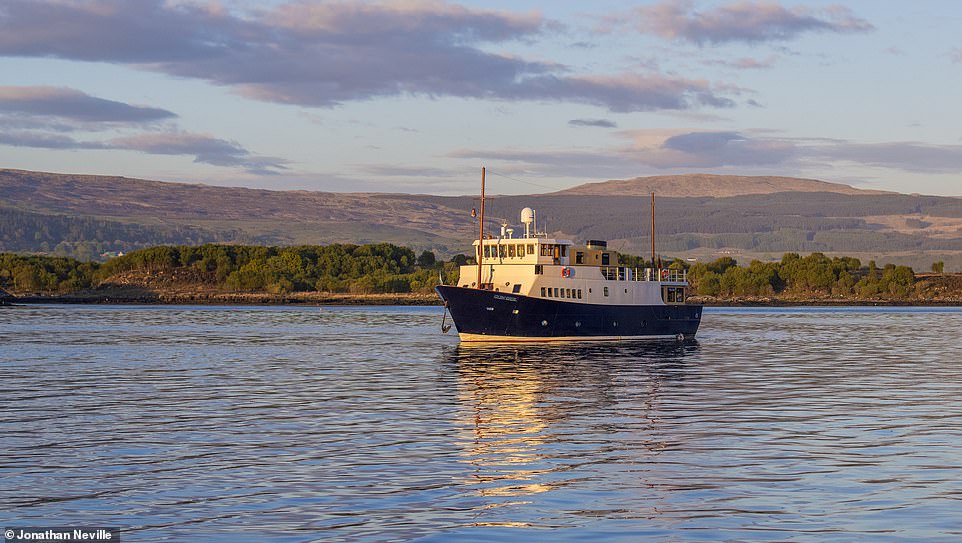 The MV Glen Shiel, pictured, visits the isles of Bute and Arran during the ‘Coastlines and Castles of Argyll and the Clyde’ cruise

Admire the rich carpet of autumnal colours draped over Argyllshire’s hills and along the coastline of the Clyde estuary where ruins of brooding castles guard the shores.

The six-night exploration aboard the 12-passenger MV Glen Shiel visits the isles of Bute and Arran, invariably attracting dolphins that dive in the boat’s wake. Evenings at anchor in quiet sheltered lochs bring quiet, expansive, star-filled skies and a chance to spot the pulsating pink and green streaks of aurora borealis.

Set sail: The Majestic Line offers a round-trip ‘Coastlines and Castles of Argyll and the Clyde’ cruise from Holy Loch, near Dunoon, on October 22. From £2,460 pp (themajesticline.co.uk). 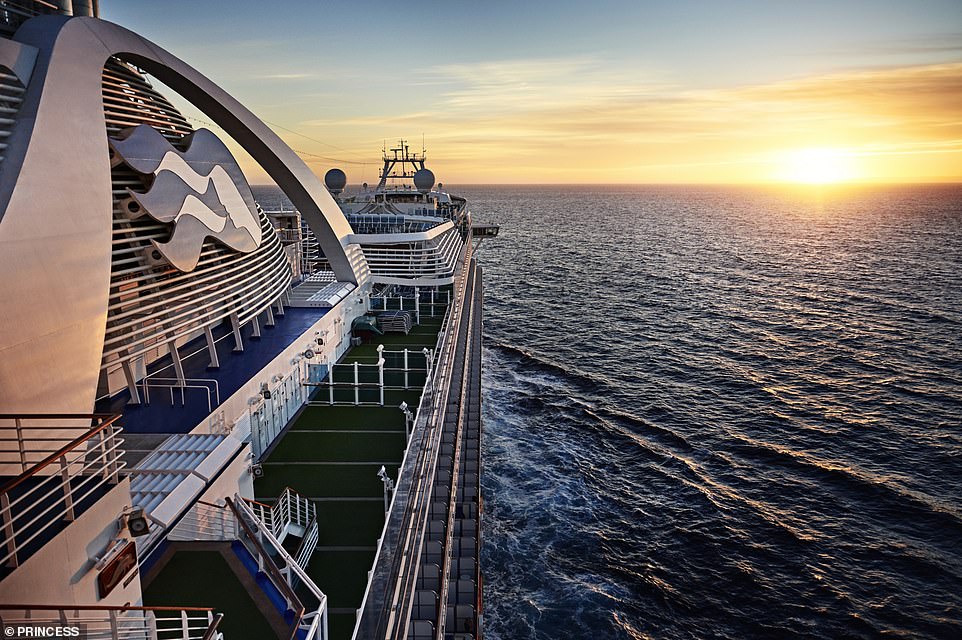 There’s no escaping Ireland’s irrepressible beat thanks to live music spilling out of Cork’s cosy bars and much amiable chatter. It is said the latter comes from kissing nearby Blarney Castle’s famous stone, which bestows the gift of eloquence.

Dublin brims with historical sights, from Trinity College and the 13th-century St Patrick’s Cathedral to the Guinness Storehouse, where you can enjoy a pint of the legendary black stuff. In Belfast, the Titanic museum charts the history of the doomed ship, while a pub walk opens the doors to the city’s atmospheric bars.

Thundering waterfalls and geothermal springs are natural wonders of the Land of Fire and Ice that spice up this Celebrity Cruises voyage, with calls at Iceland’s capital Reykjavik and second city Akureyri, bookended by stops around the British Isles.

Waterford stands tall as Ireland’s oldest city, famed for its precious crystal, and maritime hub Liverpool rocks to the rhythm of its legendary music heritage and Beatles heyday. 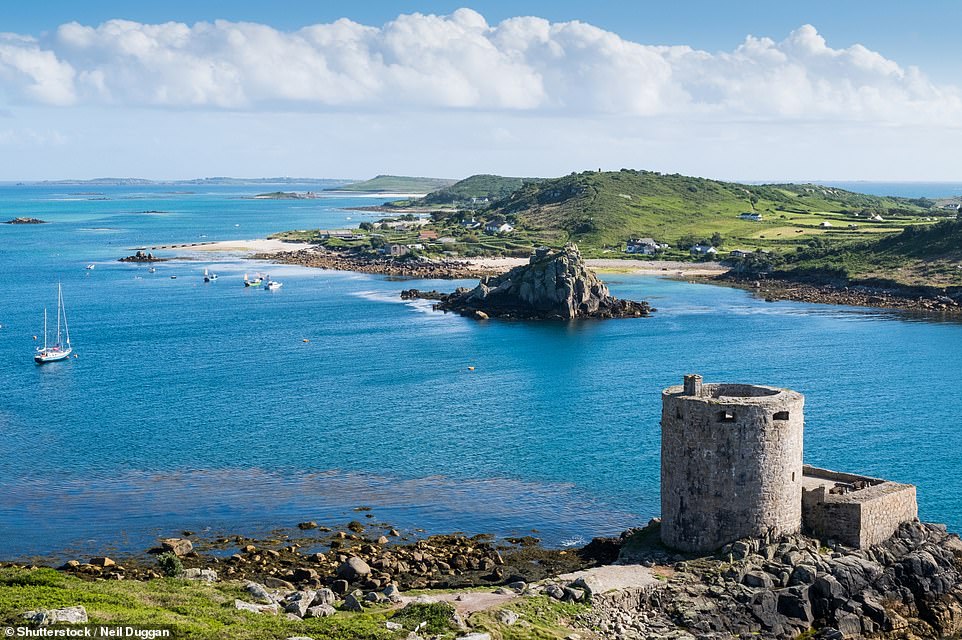 Cromwell Castle on Tresco in the Scilly Isles. Passengers on the ‘Summer in the Isles’ round-trip can visit Tresco during the one-week cruise

A one-week Noble Caledonia cruise spends more than two days in the Scillies, enabling guests to zip between the main islands on small boats, from the largest island St Mary’s and its main hub Hugh Town to traffic-free Tresco and its sub-tropical Abbey Gardens.

Don’t miss the drop-dead gorgeous beaches of St Martin, nature trails and coastal walks of St Agnes and rugged Bryher, known as untamed Scilly due to the Atlantic rollers that pound its shoreline.

Set sail: A ‘Summer in the Isles’ round-trip sailing from Portsmouth also visits the Channel Islands, departing on August 22. From £3,095 pp (noble-caledonia.co.uk).