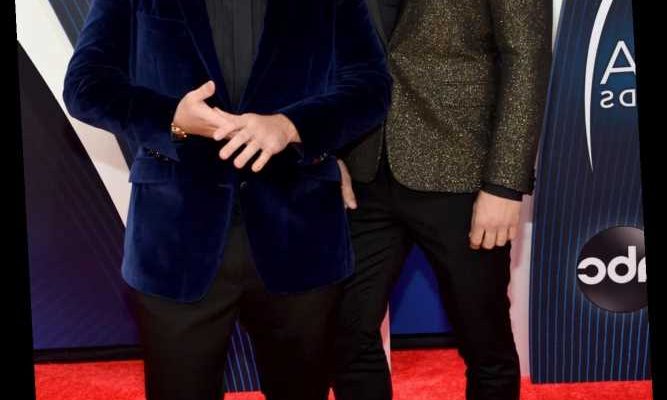 Dan + Shay's Dan Smyers and Shay Mooney are stepping into a new era while embracing their past.

On Friday, the duo released their new song "I Should Probably Go to Bed," a pop-infused piano ballad completed during the ongoing coronavirus lockdown, which allowed them the freedom — and time — to create like they did in the early days of their partnership.

"Shay was at my house after all the quarantine stuff happened," Smyers tells PEOPLE. "We'd been on lockdown and hadn't seen a human for two months after our tour got put on hold. We sat down at the piano, and we were just feeling that magic again, singing with each other."

"Shay started singing some crazy vocal stuff, and I was like, 'I'm so inspired, let's go upstairs [to my studio],'" he continues. "The studio is an extra bedroom in the house with a mattress leaning against the wall and pillows on the floor. It's not glamorous, very DIY. But Shay started singing and it was just like we were feeding off each other's energy like we had done in the beginning of our career, before we had all kinds of things on our calendar."

For the past seven years, as they rose to stardom and reached crossover success with back-to-back hits like "Tequila," "Speechless" and their Justin Bieber collaboration "10,000 Hours," Smyers, 32, says he and Mooney, 28, haven't had "the time to experiment like we really want to."

"With this one, [we had] nothing but time on our hands," says Smyers. "So it was cool to really tap into that. I feel like we really put our stamp and our signature on the way the song sounds and people have been relating to it." A big deal recently, Mooney says, was getting Asher potty-trained.

“That was huge,” he says. “We finally got it done, and he’s just the cutest, sweetest little guy. He’s very smart and he talks a lot, so he's definitely my child. We're having fun. I'm ready for things to open back up for him. I'm ready for him to be able to go back to school and see his friends, obviously, when the time was right.”

“It’s been awesome though, to watch them and re-get to know my family in a way that I've never really got to spend this much time with them,” he continues. “So kind of navigating that and learning when to have a little bit of separation. We're so used to being like, ‘Alright, I'll see you in five days.' So I think that having the excess of time of being able to manage that, just prioritizing that family time, is really important.”

Mooney also thinks it's given him and Smyers a "new appreciation" of what they do and the chance to "fall in love with music again."

"When Dan and I got back together, that first time, we were just like, 'Dude, this is so amazing,'" he says. "We were able to take a moment. You go through this really busy season of: we won Grammys and won all these awards and it doesn't stop it. You don't really get a time to actually be like, 'Alright, let's celebrate this one.' We try as best as we can, but you're trying to do the next thing. This time, it really forced us to be like, 'Man, we won a Grammy, we won two Grammys!' Looking at all these things and being able to have that moment like, 'Dude, we're so blessed to be able to do what we get to do.' It's given us a new appreciation for creating music and a new excitement."

In addition to creating new music in quarantine, Smyers and Mooney have been keeping busy with projects around their homes that they never had the time to get to before.

"That's all I've been doing,” Smyers says. “We literally moved like the week our tour started. So I had no time. This has been a blessing in disguise for that. I love landscaping, I love being outside and mowing the lawn. It sounds ridiculous, but just things like that, like very mundane domestic things, I love. It's very therapeutic for me. So to be able to do that has been awesome.”

“To be able to move into a new house, actually living there has been amazing,” he adds. “And not FaceTiming with my wife when it's like, ‘Do I like this couch? I don't know. I mean, I'm looking at it from halfway across the country.’ So it's been cool to just enjoy being home. This is the first summer we've ever had off the road.”

For Mooney, he says he’s been able to do some yard work like Smyers, but his big project was putting a golf simulator in his home.

“That was one thing that I had been wanting to have forever,” he says. “It takes a long time, because they're out of Canada, the company that I use. I'm obsessed with golf right now. So I did it all myself. I built some of the framework. I had this awesome, actually Dan's contractor, he helped me put it together, and I put in a golf simulator. That was my big project.”

As to their decision behind debuting "I Should Probably Go to Bed" at a time when some musicians are postponing releases, Smyers says "this song felt special, it felt urgent."

"This song showcases who Dan + Shay is, where we're going," he says. "I think it still touches on why fans fell in love with us in the first place: Shay's voice, which is, obviously, the most incredible voice ever, and our stacks of harmonies. I think it's very Dan + Shay, but it feels evolved. It feels like the next chapter, the beginning of a new era. We were just like, 'The time feels right.'"

There's no definite plans for a new album though — at least, not yet.

"We're going to take our time and make sure that we do every single song like it's our last, like it's the most important song," Mooney says. "New music is going to come whenever it's ready. I think that some of our best songs that we're going to write are still to come after this."

When life returns to normal, Mooney hopes that he and Smyers take a little bit of what they’ve learned through this time.

“Even after we go back and we go touring, I think Dan and I, we could work on maybe spending time with our families in a better way,” he says. “But hopefully we learn a lot from all of this and things will get back to normal.”