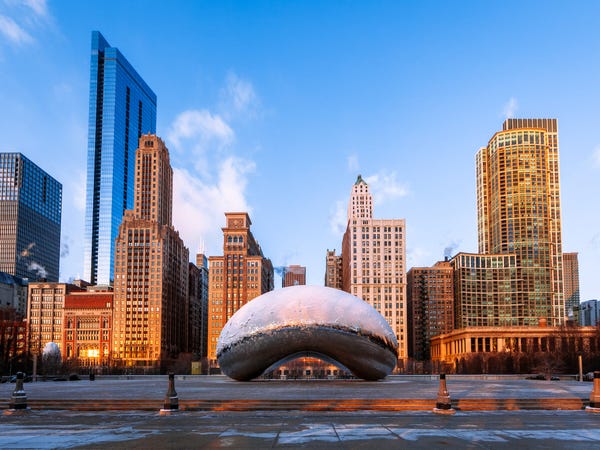 Three residents of Chicago, Illinois could win a cash prize of $5,000 for coming up with the best idea for winter dining in the city.

Chicago Mayor Lori Lightfoot announced the Winter Dining Challenge on Twitter this week, noting that Chicago winters have a "reputation."

"We're asking Chicagoans to share their ideas for innovative winter outdoor dining solutions that adhere to COVID-19 protocols so we can support our favorite local restaurants while keeping Chicagoans healthy," she wrote.

The winter dining contest was created along with IDEO, a California-based design company, BMO Harris Bank, and the Illinois Restaurant Association, and is open to submissions until 11:30 p.m. on September 7. Chicagoans can submit their proposals online to a panel of judges that will include local restaurants and community residents.

According to IDEO's press release, each entry must include research, a prototype, details on feasibility, an overview of how it addresses the city's needs, along with a few other materials.

Each entry must also adhere to the City of Chicago's COVID-19 guidelines.

Some Twitter users responded to Lightfoot's Twitter announcement with images of their own ideas and thoughts on the challenge.

User @tinaandgary responded with a photo of an small, individually sized greenhouse.

"With heaters of course," she captioned the photo.

Twitter user @DopeTyler posted a photo of plastic domes that he said are already in use at local establishment City Winery Chicago.

Other users suggested igloos and heated tents as solutions for winter outdoor dining.

"Use pods or 'igloos', so each dining group is walled off from the others," one user wrote.

"Use outdoor market tents and install portable heaters. Use that concept on the restaurants in Old Town and Part of Wrigleyville," another commented.

Winners of the challenge will be announced in mid-September.

Representatives for Chicago Mayor Lori Lightfoot and IDEO, respectively, did not immediately respond to Insider's request for comment.