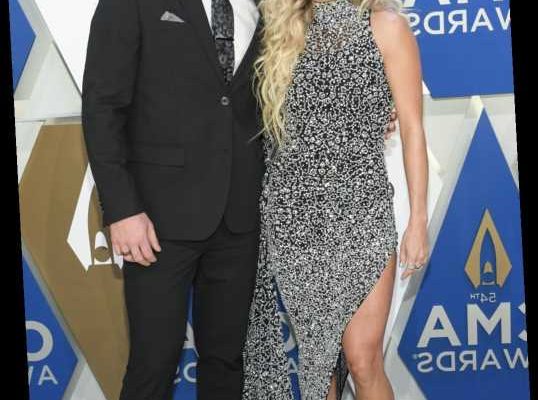 Carrie Underwood is loving the unique gift her husband Mike Fisher surprised her with for Christmas.

The country artist, 37, recently told Entertainment Tonight that her retired hockey star husband gifted her with cows for the holiday.

"He got me cows, which is what I wanted," Underwood said. "They're my favorite animal. I love them, they make me so happy."

The singer, whose HBO Max Christmas special is streaming now, went on to clarify that she wanted the cows simply to spend time with at her Nashville farm.

"I don't want them for any purpose, just to love them," she explained.

Fisher, 40, recently documented his experience at a cattle auction on his Instagram Story where he purchased the two animals for Underwood, ET reported.

Though Underwood was elated with her gift, she admitted that she often asks not to get presents because she's "so awful" at returning the favor.

"I’m actually not a good gift-giver… I will tell my husband like, 'Don’t get me anything,' because that means I have to get him something," she teased. "I'm so awful!"

However, perhaps the best present of all for Underwood was being able to team up with her 5½-year-old son Isaiah on her first-ever holiday album, My Gift, which she released in September.

"It was so great," the singer told PEOPLE earlier this month. "When we recorded, I was able to be in the booth with him and encourage him and try to remind him what words were coming up next, things like that." Underwood revealed the most emotional aspect of the process for her was hearing Isaiah's part after the studio session.

"I got to listen to his vocals [get] put together and then listening to myself with him," she said. "I was laughing, and I was crying, and it was just very overwhelming in a good way. It's just very emotional."

The singer also noted that being able to work on her Christmas album amid the pandemic was "really a gift for [her]."

"It was a welcome distraction," she said. "It was such a stressful, hard year and nobody knew where it was headed the majority of the time. It was nice to be able to go in and have this to look forward to."

Another big silver lining for the musician was being able to spend more time with her family including her younger son, 23-month-old Jacob, and her husband.

"I tried my best to start every morning just being thankful," she added. "We're all healthy right now. And we have each other, and I got to just stay in one place, which hasn't happened in a long time and really just watch, especially my youngest one, to get to know him and kind of watch him grow."