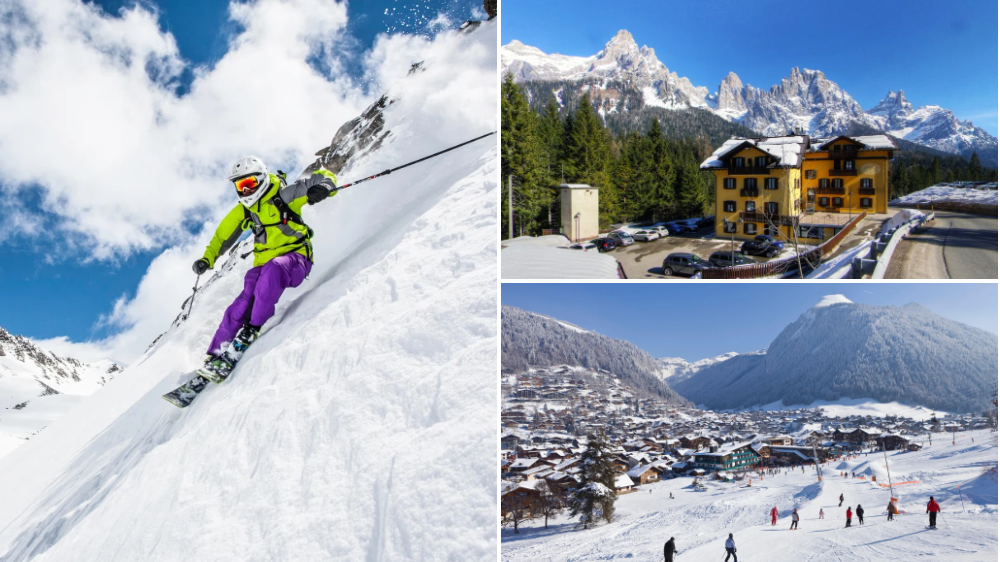 Skiing can be a fairly expensive hobby.

But despite what you may think, a wintry getaway doesn’t have to cost a lot of money.

In fact, there are plenty of skiing packages on offer for around just £550pp – or even less. And that’s for a full week on the slopes.

From all-round Andorra to the dreamy Dolomites, read on for the best bargain skiing breaks that Europe can offer.

Pubs dominate the centre, where you’ll also find the locally owned Pension Valentina. Complete with a boot room, this simple but homely guesthouse is centred on a wood-panelled dining room in which alpine breakfast buffets are served. Mayrhofen’s gondola is only three minutes away on foot.

The resort itself is relatively quiet but there’s a good smattering of eating and drinking venues. Trentino – the wider region – has stupendous scenery dominated by its Dolomites peaks.

Just 100m from the nearest lift, the yellow Hotel Fratazza has traditional rooms and its own Italian restaurant.

Seven nights from £518pp, room only, including flights from Gatwick to Verona, departing Jan 4, via Expedia.

Full board in France

This entails hostels that are relatively basic but modern and well run. In the Alps at the dramatic Val Thorens – Europe’s highest ski resort – the UCPA’s centre has a bar, sun terrace, games room and a large restaurant.

Linking to the Méribel and Courchevel valleys, the surrounding terrain suits all abilities.

Seven nights from £481pp, full board in a shared four-person room, including a three-day lift pass, equipment hire and instruction, departing Apr 22, via Action Outdoors. Flights from London to Geneva from £58 return with EasyJet.

In early January, the low-key village resort of Morzine in the French Alps will still be fairy-lit and enchanting. Encompassing the linked area of Les Gets, it has 120km of mostly blue and red pistes.

Stay at Hôtel Les Fleurs – it’s outside the centre but 50m from a stop with free buses serving Morzine’s lifts. Breakfasts are continental and four-course dinners focus on Savoyard cuisine.

Wedged in the Pyrenees, Grandvalira is Andorra’s premier place for skiing, courtesy of three linked resorts providing more than 200km of pistes – something nowhere else outside the Alps can boast.

Gentle slopes dominate, yet intermediates have an excellent selection of blue and red runs to choose from, while the off-piste opportunities should please advanced downhillers or boarders.

The spacious Residence Andorra Apartments are a few minutes from El Tarter’s gondola, shops and restaurants.

Seven nights from £509pp, self-catering, including flights from Gatwick, Birmingham or Bristol, departing Dec 12 via Inghams.

Big it up in Borovets

An option for more party-minded skiers is Bulgaria’s bargain-priced Borovets, which promises cheap beer in bass-pumping basement dens. Ski-wise, its 58km of runs – mostly red or blue – weave attractively between conifers under the gaze of Musala, the country’s highest mountain.

A minute’s walk from Borovets’ main gondola and built in sober Soviet-style, the 250-room Samokov Hotel has a bar, huge indoor pool, spa, buffet-style restaurant and bowling alley. Bedrooms are dated but spacious and afford fine views. It’s hardly five-star but it’s fun and does the job.

Seven nights from £492pp, B&B, including flights from Manchester and transfers, departing Mar 11 via Crystal Ski.

Stay stylish on the slopes

This article contains affiliate links. We will earn a small commission on purchases made through one of these links but this never influences our experts’ opinions. Products are tested and reviewed independently of commercial initiatives.

Buy for £29 from BrandAlley.