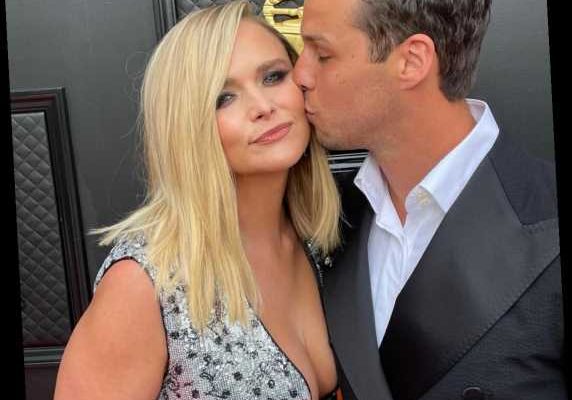 Miranda Lambert earned her third Grammy Award and her husband Brendan McLoughlin couldn't be prouder of her.

On Monday, hours after the singer-songwriter, 37, won for best country album, the retired New York Police officer showered his wife with love in a congratulatory post on Instagram. "I could not be more proud of this wonderful woman I get to call my wife," McLoughlin, 29, wrote along with three photos of the couple, including a selfie of him kissing the singer on the cheek.

"Last night you continue to show the world how being true to yourself rewards you. Watching this album go from being just a thought to celebrating your Grammy victory was magical. I cannot wait to be a part of the future magic you create," the father of one concluded.

Lambert also raved about her big night on Instagram.

"Oh what a night! 💫🌟It was a different kind of Grammy's this year but I'm so happy we were able to celebrate music in a big way! I'm beyond thankful to be part of our Nashville family. Got to see some friends in person and toast a few on facetime. 💖 And y'all …. my date….🔥❤️Thank you to everyone for believing in 'Wildcard' 💙🐦 it means the world to me," she shared, along with five photos from the Grammys, including a FaceTime call with fellow nominee Ashley McBryde and a group photo with fellow nominees Brandy Clark and Ingrid Andress. On Sunday, Lambert, who performed her hit "Bluebird" during the show, earned the top award in the country music genre. Her seventh studio album, Wildcard, was nominated in the same category as albums from Ingrid Andress, Brandy Clark, Ashley McBryde and Little Big Town's Karen Fairchild, Kimberly Schlapman, Phillip Sweet and Jimi Westbrook.

This year was the first year of only female nominees or female-fronted groups.

"I feel like holding this right now, I'm holding it for all of us — especially us girls," Lambert said in her acceptance speech, later giving a shout-out to her husband. "I'm very thankful for this."

Check out PEOPLE's full Grammys coverage to get the latest news on music's biggest night.

Before the awards broadcast, she spoke with PEOPLE (the TV Show!) correspondent Jeremy Parsons about her and McLoughlin's road trips during quarantine and how they got to spend lots of quality time together.

"When you travel for a living, sometimes you don't want to travel on your time off, so that was another positive thing about being forced to be off tour. I got to go see some actually see some things," Lambert said, adding that they listened to crime podcasts while on the road.

"[My husband] really can put up with me," she said with a laugh about what she learned during the pandemic. "That was good news."

Lambert added, "We got married not that long ago and so we were really had a lot of togetherness. We got to really know each other. It was fun." Also on Sunday, Lambert told reporters after her win that she was looking forward to hitting the road again to tour when it is safe to do so. "'Bluebird' was a big song for me and I haven't got to sing it with them and play it with the band much and so I'm excited to do that," she said. "This feels really good in a year where you're like, 'What's happening? Does that doesn't mean anything anymore?' But knowing that the music helped get people through, including myself, I know that the celebration will be even bigger when we get back together."

Next, Lambert will release her upcoming album with songwriters Jon Randall and Jack Ingram, called The Marfa Tapes, which is scheduled for a May release.