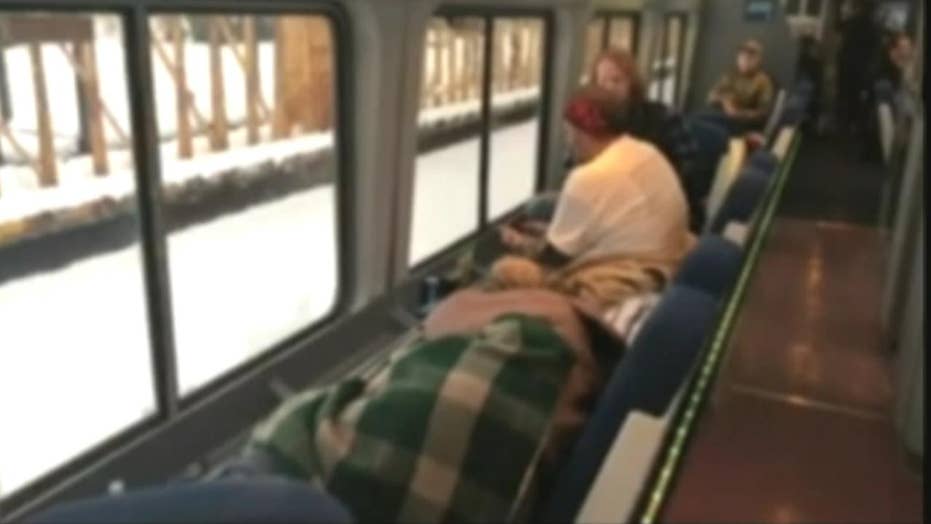 Amtrak train bound for Los Angeles collided with a tree on tracks near Oakridge, Oregon; Dan Springer reports from Seattle.

An Amtrak train traveling from Seattle to Los Angeles has started moving again after spending 36 hours stranded in the snowy Oregon mountains with 183 passengers on board.

The Coast Starlight train came to a halt about 6:20 p.m. on Sunday outside of Oakridge when crew members spotted trees on the tracks. The downed tree and snowy conditions prevented them from moving forward, officials confirmed.

AMTRAK TRAIN WITH 183 PASSENGERS STRANDED IN OREGON FOR MORE THAN 24 HOURS: REPORT

According to reports, the Amtrak crew of 13 decided to keep the passengers on the train, which had electricity, heat and food, rather than find ways to get them to a small nearby town, which was said to have been dealing with a blackout, among other snow-related problems.

The passengers seemed in decent spirits as the hours-long delay stretched on, causing a shortage of food and hygiene products, including diapers.

"This is hell and it's getting worse," Rebekah Dodson posted on Facebook along with a photo of other passengers smiling into the camera after they had been stuck for 30 hours.

After more than a day of being on the track, the Amtrak train began to move again, heading toward Eugene, about 45 miles from where it was stuck. The Red Cross is waiting at the depot to help passengers when the train arrives.

"With more than a foot of heavy snow and numerous trees blocking the track, we made every decision in the best interest of the safety of our customers during the unfortunate sequence of events," Amtrak Executive Vice President and Chief Operating Officer Scot Naparstek said, adding that customers would get refunds and other compensation.

Amtrak has not said when the train might continue on its way to Los Angeles.

The Associated Press and Fox News’ Bradford Betz contributed to this report.