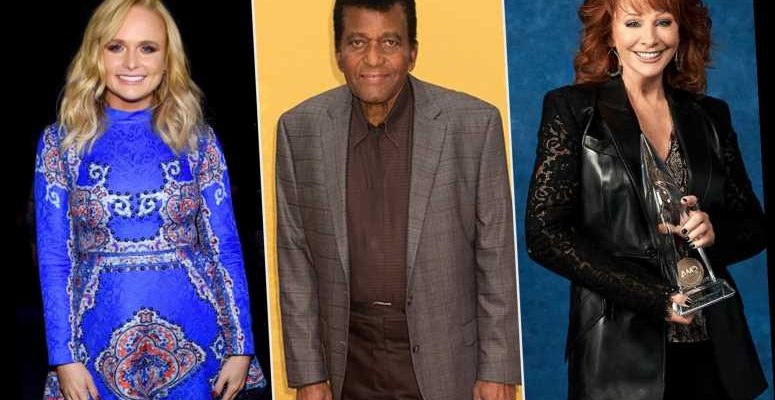 It's time to pull out those cowboy boots!

The 2020 Country Music Association Awards are finally here. The 54th annual ceremony honoring some of the biggest names in country music will air live Wednesday night at 8 p.m. EST on ABC.

Last year, Garth Brooks was named entertainer of the year for the seventh time, Luke Combs and Kacey Musgraves won the award for male and female vocalists of the year and Ashley McBryde was named new artist of the year.

Here's everything to know about the socially distanced 2020 CMA Awards!

Reba McEntire and Darius Rucker will spearhead the evening

Five-time host Reba McEntire, 65, will return to the CMAs to co-host the show alongside fellow country star Darius Rucker, 54. This marks the first year that 12-time host Carrie Underwood will not anchor the show since 2008. "I'm thrilled to be back hosting the CMA Awards and even more thrilled that I get to share the stage with Darius Rucker," McEntire said in a statement. "We're looking forward to a night of celebrating great country music and hope you'll tune in and watch!"

Rucker added that he's equally as excited to co-host the star-studded event.

"I look forward to the CMA Awards every year because of the incredible performances and the opportunity to celebrate the year in country music," he said in a statement. "To be invited to host this year's awards alongside Reba — are you kidding me? It is an absolute honor."

"Even though this year will look a little different than normal [due to the coronavirus pandemic], I know that we're all eager for a night of musical celebration," added the country star. "This year's show definitely won't disappoint."

The icon, 86, will be presented with the Willie Nelson Lifetime Achievement Award by Jimmie Allen. (The accolade is named after Nelson, 87, who received the inaugural prize in 2012.)

"#CharleyPride Fearless, Inspiration, Courageous, Pioneer," Allen tweeted ahead of the awards show. He also shared a photo alongside the "legend" during rehearsals on Monday.

"Charley Pride is the epitome of a trailblazer," said Sarah Trahern, CEO of the CMA in a statement about the award. "Few other artists have grown country music's rich heritage and led to the advancement of country music around the world like Charley. His distinctive voice has created a timeless legacy that continues to echo through the country community today. We could not be more excited to honor Charley."

Pride — a U.S. Army veteran and former Negro League baseball pitcher — became America's first Black country star in the '60s. He earned his first Grammy nomination for hit song "Just Between You and Me" in 1966 and went on to win three Grammy awards.

Pride has released nearly 30 No. 1 hits on the Billboard Top 10 Country chart. In 1971, he was named both entertainer and male vocalist of the year — he won the latter once more in '72. In 1975, Pride became the first Black man to host the CMA Awards.

Pride was inducted into the Grand Ole Opry in 1993 — 26 years after he first played at the esteemed venue. The superstar famously said he was initially invited to join the Opry in '67 but politely declined to continue touring.

He received the Academy of Country Music's Pioneer Award in 1994. The hitmaker was inducted into the Country Music Hall of Fame in 2000. And in 2017, the Recording Academy celebrated his music legacy with a Lifetime Achievement Award. Miranda Lambert is the most nominated artist of the night with seven CMA Award nods this year. Combs follows closely behind with six nods. Both singers are in the running for entertainer of the year.

Along with Combs and Lambert, Carrie Underwood, Keith Urban and Eric Church are up for the top award of the night.

"I've always been a huge supporter and believer, and was very vocal last year about how I thought [Underwood] should take it home," Lambert told Entertainment Tonight on Tuesday about her fellow female nominee. "So if she does this year, I'll be the first one out of my seat."

Maren Morris follows behind with five nominations. Also notable this year, Justin Bieber earned his first CMA Awards nods. The pop star is up for awards in three categories: musical event, music video and single of the year for his collaboration with Dan + Shay on "10,000 Hours."

Thomas Rhett, Luke Combs and Maren Morris are among the stars slated to perform

The night will be filled with many performances!

Hosts McEntire and Rucker will team up "for an emotional, groundbreaking tribute performance," according to a CMA press release.

Viewers can expect to see performances from stars including Lambert, Morris, Combs, McBryde, Lady A, Rascal Flatts and Eric Church.

Thomas Rhett will hit the stage with McEntire, Hillary Scott and Chris Tomlin for a rendition of "Be a Light." Dan + Shay and Justin Bieber will team up for a debut performance of "10,000 Hours," while Keith Urban will hit the stage from his home country of Australia.

Dierks Bentley, Jason Aldean, Brothers Osborne, Jenee Fleenor and McBryde will open the show with a tribute to the late Charlie Daniels.

Puth will make his CMAs debut alongside Barrett to sing "I Hope," which is nominated for single of the year.

In a last-minute turn of events, Kelsea Ballerini will hit the stage for a rendition of "hole in the bottle."

On Monday, it was also announced that Chris Stapleton and Charles Kelley have been added to the list of performers. Stapleton will perform his new single "Starting Over." Lady A's Kelley will join Carly Pearce to sing her hit track "I Hope You're Happy Now" in place of fellow country star Lee Brice who recently tested positive for the coronavirus.

Meanwhile, Florida Georgia Line was removed from the performance lineup after Tyler Hubbard tested positive for COVID-19 earlier this week.

A slew of stars are set to present awards Wednesday night.