One of music’s rising stars just planted his flag on the ‘moon.’ Yung Bleu talks about his new album and how he’s done being ‘slept on’ and how ‘Moon Boy’ is going to wake everyone up.

“I feel good,” says Yung Bleu in an EXCLUSIVE interview with HollywoodLife, and why shouldn’t he? When we’re speaking, he’s just days away from dropping his highly-anticipated debut studio album, Moon Boy (out today, July 23), a project that looks to introduce him as the next big star in the hip-hop galaxy. Such an introduction is needed since many may only know Bleu from the 2020 collab with Drake, the Platinum-certified hit, “You’re Mines Still.” In fact, days before Moon Boy, and the Mobile, Alabama rapper doesn’t have his own Wikipedia page. That, and how his decade-long career has been seemingly overlooked, is about to change. “I’m looking at [Moon Boy]  like a crossover to the next level,” he says. “I’ve been on the underground scene for a long time. This is my crossover to that bigger level.”

“I definitely feel like people are gonna understand how much more of an artist I am,” Bleu tells HollywoodLife. “A lot of times, people look at one song and just feel like ‘that’s it.’ I feel like this album is going to just prove to people that I’m really talented.” While many might know Bleu for “one song” from last year, one look at his Discogs listing shows he’s been at it for nearly a decade. “A lot of people think I just popped out of nowhere. Go look back at my discography. I always say that. I have platinum records years ago.”

He’s right – just check the RIAA. Though “You’re Mines Still” elevated his profile – “With me having a big record last year, more people were able to open their ears and really see who I was and type of music that I did,” he says – you could say that Bleu’s breakout was “Miss It,” his 2017 single that was certified platinum a month weeks before the Drizzy collab earned that mark. He also has two gold records to his name – 2019’s “ice On My Baby” and 2020’s “Unappreciated.”

“I feel being slept on, being underrated,” says Bleu. A lot of people don’t know my face or really know much about me. I feel like, such another type of life right now.” Bleu adds that Moon Boy marks “a rebirth, a new level” for him. The album’s title plays into that theme, as does the opener, “Die Under The Moon,” featuring John Legend.

“I’ve always been a fan of John Legend. I’m just blessed. For him to come through with his verse and his part. I felt like he came and did it perfectly,” says the emcee. “I just feel the intro signifies rebirth. End of an era, to the rebirth of another era. I think my intro really sets the tone of everything I need to say on the album, for real.” 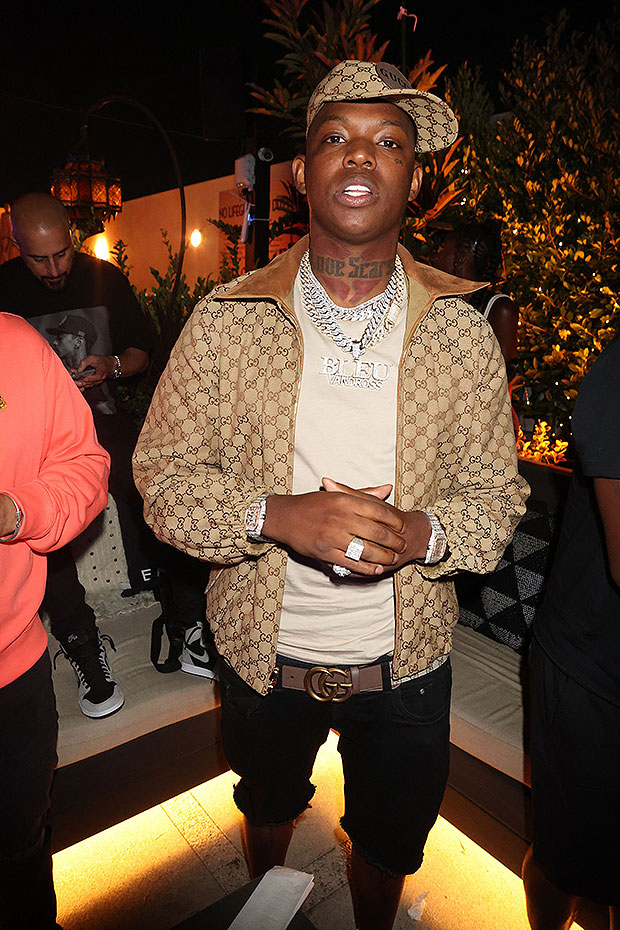 Moon Boy boasts a ton of star power. H.E.R. (“Tired of You”), Kehlani (“Beautiful Lies”), Jeezy (“Shoe Box”), Gunna (“Waterworks”), Kodak Black, and Moneybagg Yo (“Angels Never Cry”) are just a few of the A-listers appearing on the album. Moon Boy also contains “Way More Close,” the new single with Big Sean, and “Baddest,” Bleu’s collab with Chris Brown and 2 Chainz. “Everybody on the album are people I always wanted to work with,” says Bleu, a touch of gratitude in his voice. It’s a voice that will be heard by millions streaming Moon Boy online – and by the thousands attending Rolling Loud and Summer Jam.