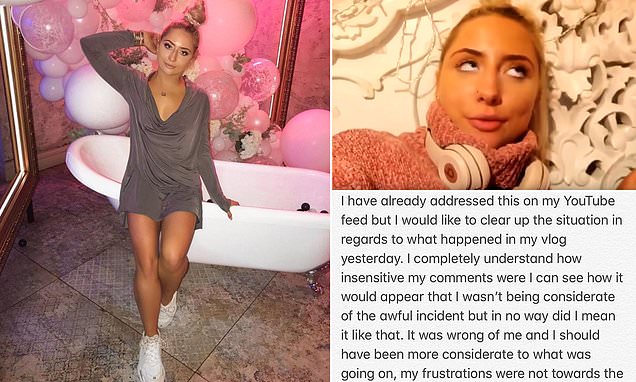 A YouTuber and anti-bullying campaigner has issued an apology for a video in which she rolled her eyes and complained of a delayed train journey because a passenger had committed suicide.

Saffron Barker, 18, Brighton who goes by the name Saffy Boo has almost 1.5M subscribers on YouTube and posts videos about fashion, beauty and lifestyle and has just launched a range of homeware and accessories with Primark.

In a now deleted video shared earlier this week, Saffy complained: It should have taken me 50 minutes and instead it took four and a half hours, so that was amazing.

‘Obviously, it’s really sad, some one did get hit by a train. But it meant that I couldn’t get home. And it wasn’t just I couldn’t get home, it was just the most stressful thing. They were doing no buses to help anyone. I was in an hour taxi line stood in the cold.’

However, after facing a backlash she has issued an apology on Instagram, saying:  I completely understand how insensitive my comments were. 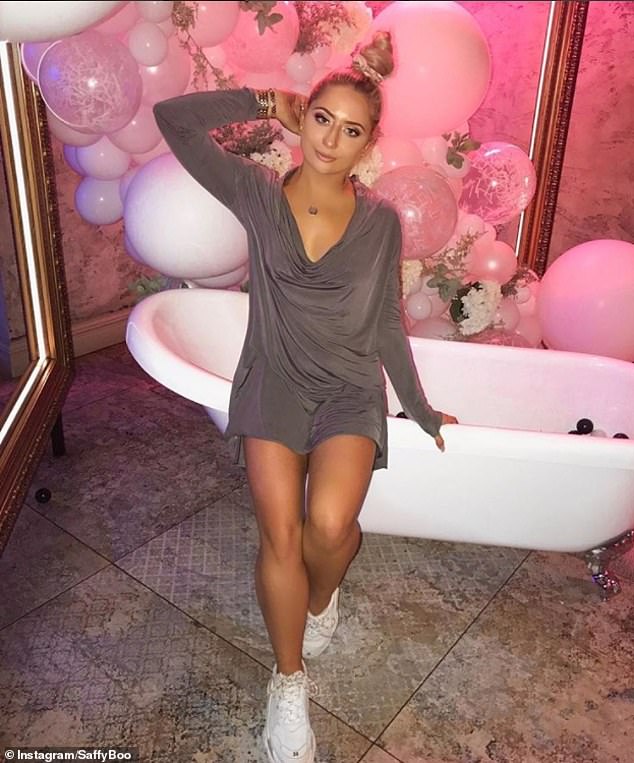 Saffron Barker, 18, Brighton who goes by the name Saffy Boo has apologised after she posted a vlog complaining that her journey home was delayed by someone jumping in front of a train 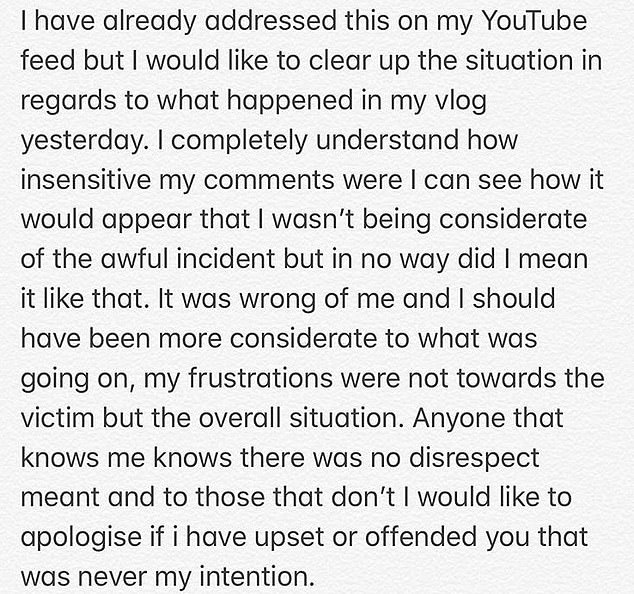 After facing a backlash, the YouTuber who has almost 1.5M subscribers issued an apology on Instagram, saying that she meant to disrespect to the victim

‘I can see how it would appear that I wasn’t being considerate of the awful incident but in no way did I mean it like that.’

She added: ‘It was wrong of me and I should have been more considerate to what was going on.

‘My frustrations were not towards the victim but the overall situation. Anyone that know me know there was no disrespect.’

Since the video was posted online, some commenters have called on Primark to discontinue their association with Saffron. 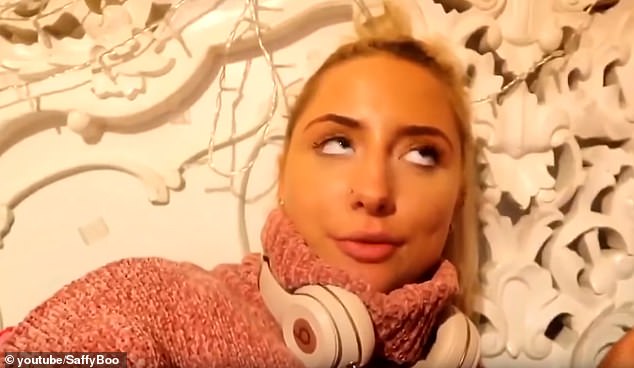 In the video, Saffron appeared to roll her eyes as she complained that her 50 minute journey home had taken more than 4 hours because someone had committed suicide 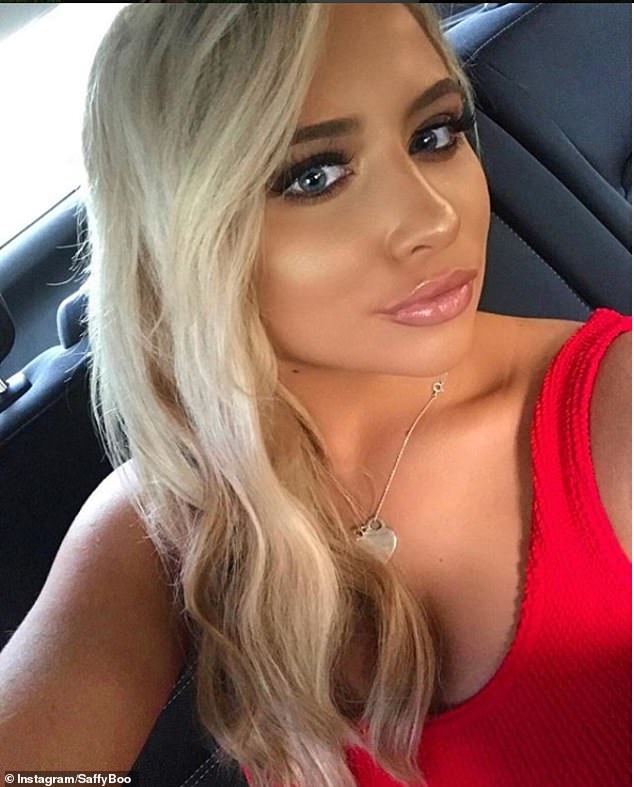 The YouTube sensation recently launched her own homeware and accessory range with Primark, but some commenters have asked the retailer to end the collaboration

However, others have defended her, insisting that the comments were not meant maliciously and pointing out that she has apologised.

As well as taking part in the mental health campaign, I Am Whole, The YouTuber is also an ambassador for the anti-bullying initiative, Ditch The Label.

In an interview to announce the partnership, she revealed she’d lost a close friend to suicide.

‘A very close friend of mine committed suicide the year before last and she had mental health issues,’ she explained.

Some commenters have called on Primark to end their association with SaffyBoo after her comments. However others have defended her, saying it wasn’t meant maliciously

‘I feel that if people spoke about it more and were more open about it, it could save someone’s life.

So many people live with mental health issues and are ashamed to talk about it, I want to help people realise that there’s no shame and most of us will go through it or will know someone close to us that is suffering at some point in our lives.’

It’s not the first time the YouTuber has found herself involved in a controversy.

Last month, she was accused of Photoshopping the effects of fake tan she was paid to plug on Instagram. Saffron Barker, 18,(pictured) was questioned by her fans after posting the above picture to her Instagram as an advert in partnership with Loving Tan 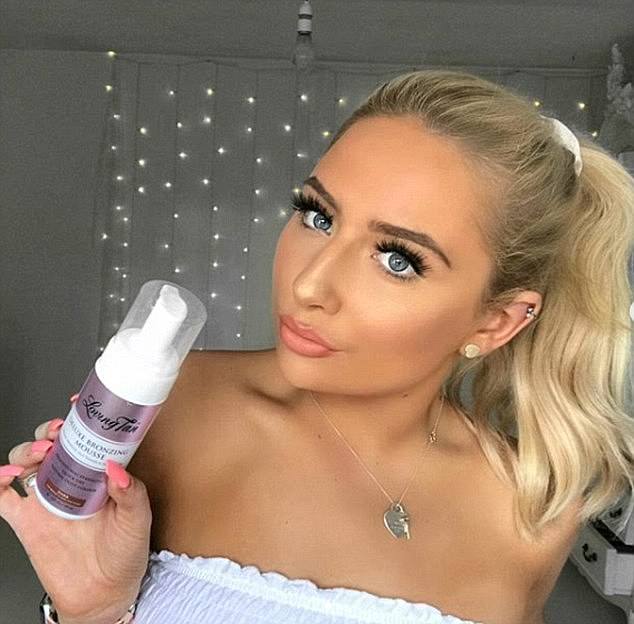 Saffron shared what appeared to be before and after snaps to demonstrate the results of using Loving Tan.

Beneath the near identical side-by-side selfies – in which she was seen holding up a bottle of the tanning mousse in her bedroom – Saffron wrote that the brand’s Deluxe Bronzing Mousse was ‘the one’, using the hashtag #ad to indicate that she’d been paid to endorse the product.

In the second image, her skin appeared noticeably darker, but suspicious followers pointed out that the background did too – and suggested Saffron had simply digitally altered the photo to look more tanned, rather than actually using the product and photographing the results.

A spokesperson for Saffron said her fans would ‘understand and appreciate’ that hers is a ‘truly authentic’ partnership with Loving Tan, but did not deny that the image was digitally altered.