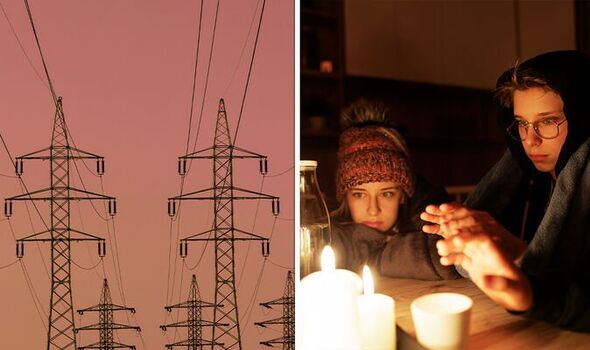 Load shedding, which was declared the South African Word of the Year earlier this week by the Pan South African Language Board, is the deliberate shutdown of electric power in a part, or parts, of a power-distribution system. This is generally to prevent the failure of the entire system when the demand strains the system’s capacity. But South Africans are also told that load shedding is the consequence of wet coal during summer rain storms, or maintenance work on power grids, or even cable theft. Scheduled power cuts have been happening in South Africa for the last 15 years, with some periods heavier than others. Load shedding is measured in stages, from one to six. Stage one means getting cut off for around one or two hours a day, whereas stage six is a blackout of around four hours three or four times a day. As uncertainty over potential British power cuts looms, Express.co.uk spoke to the South Africans whose days revolve around load shedding.

Lynne, who is originally from Dublin but has been living in Pretoria for decades, owns two restaurants that depend on electricity to attract customers. At times, it can be extremely challenging to keep the businesses running.

“For the past two months it’s been every single day [of load shedding],” Lynne explained.

The app, EskomSePush, owned by South Africa’s biggest energy company of the same name, is used by hundreds and thousands of South Africans in order to be warned of when load shedding is about to happen. Described as “the best load shedding app”, it sends out push notifications and predictions to users.

Lynne regularly checks the app, but she has become accustomed to preparing for load shedding. Luckily, one of her restaurants is “more manageable” when power cuts occur as it is located in a shopping centre. “The shopping centre managers have generators that we use, and the power usually kicks in again after one minute,” she said.

But her other restaurant, a stand-alone venue, proved more difficult at first to run. Lynne explained: “We had to source a generator – but fortunately we didn’t have to pay for it. They cost about the same price as a car here. As a restaurant owner you have to decide if you want to fork out that money – you also have to pay for Diesel which is about £150 a day – or if you have to close your business. It’s a very hard decision, and it’s especially difficult for businesses after Covid.”

Lynne went on to explain how travel and education are hugely impacted by load shedding too. “The other thing is traffic lights – getting anywhere is a nightmare,” she said.

“We’re also coming up to final exams here for kids at school – the equivalent of your A Levels. A lot of these students have to study by candle light or gas light. Pretty much every house in South Africa now owns a little gas stove, so you can at least make tea and cook something.”

For those who are not used to regular power cuts, Lynne has little advice except: “You just have to plan.”

“It’s very difficult,” she added. “If you’ve got old people, you have to make sure they’ve got enough blankets. As one of our ministers unpopularly put it on the radio the other day, ‘you just have to work around it’.”

Sacha, 24, is Lynne’s son and, after living in Pretoria for most of his life, moved to the UK two years ago when his job in the British military sent him to Scotland.

He recalled time spent in Britain before moving to the country permanently, when he worked at a primary school, and there was a power cut. “Everyone went mad, the school closed early, everyone went home,” he said. “But if we had stopped school every time there was a power outage in South Africa, I would have spent very few days at school.”

Growing up, Sacha explained that he and his family were lucky enough not to be affected by load shedding as much as other households due to them living in an affluent area.

“The area where we lived in had a few embassies around, so load shedding didn’t hit us too often because the embassies were normally exempt of it,” he explained. “Embassies, Government buildings, hospitals, and critical care facilities are normally almost always exempt from it. There are cases when there are nationwide blackouts though.”

When nationwide blackouts do occur, hospitals use backup generators to continue to care for their patients – and keep them alive.

Sacha went on to remember a time when his parents’ restaurant, as well as everyone else in the vicinity, didn’t have power for four days. He said: “We had to restock all the fridges and freezers in the restaurant as we’d lost all our food. We went out for one day to buy everything, but we lost it all again as there was another four-day power cut after that.”

Sacha’s family home and the restaurants now have generators, but the 24-year-old recalled the days prior to that when “we would just get the candles out, play a game of Monopoly, or go for a walk”.

Like his mother, Sacha said he believes there are no benefits to load shedding – except if the system does what it was always intended for and leaves enough power for the establishments that need it most, like hospitals.

He continued: “You could argue it brings families together to spend quality time with each other, but one of my favourite things to do with my dad is watch the Formula One or the rugby together, and it obviously affects that.”

Sacha shared his advice too, saying: “It genuinely is not the worst thing in the world. Our dad would remind us that there are some people who live like that every day, especially in South Africa where unemployment is rife, where poverty is rife.

“Make sure you have emergency lights and candles. And learn some good card games too,” he added.

Camryn, a junior account executive at British PR agency TDC, saw “no hope” for the future when it came to load shedding in South Africa.

Originally from Johannesburg, Camryn left his homeland in March earlier this year and moved to London. “One of the main reasons I left the country was due to load shedding,” he said. “It got so bad, that at one point we had no electricity for nine hours a day.”

He continued: “Traffic lights would be out on the street for hours, causing massive delays with all the traffic, as well as many car accidents at intersections. When my sister was writing her final exams in our school hall, there was load shedding, and her grade had to write their exams with no lights on in the building.

“To make it even worse – they have just introduced something called water shedding, which, similarly, means South Africans will now be without water and electricity for several hours throughout the day.”

Camryn added that he doesn’t plan on returning to South Africa soon as he believes “unfortunately, there is no hope of this getting any better in the future”.