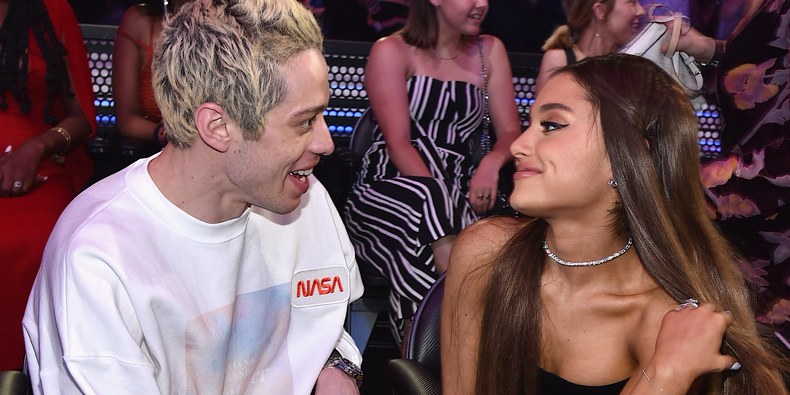 In case you somehow missed the drama-filled release of what's now the number one song worldwide on both iTunes and Spotify, just 30 minutes before Pete Davidson appeared on Saturday Night Live over the weekend, Ariana Grande released "thank u, next," a song addressing all of her recent exes—including, of course, Davidson, whom she was engaged to (and inseparable from) until this past month. It's the first preview of the new music she said she's been working on to "heal"—and seemingly part of the reason that Grande deleted her Instagram Story announcing that she was saying "bye-bye" to the internet following their breakup, given that she's been tweeting and responding to some of the many memes and reactions the song has prompted since its release.

Among that tweet flurry she informed her followers that she'd played the song in advance for her two of her other exes mentioned in the song: Big Sean, whom she dated from 2014 to 2015, as well as her former backup dancer and partner in infamous doughnut-licking crime, Ricky Alvarez, whom she dated from 2015 to 2016. (Alvarez posted a video of himself listening to the song on his Instagram Stories on Monday, zooming in on his face at the mention of his name in the verse "Wrote some songs about Ricky / Now I listen and laugh," as well as a screenshot from the Notes app tagging Grande in which he said the songs about him that she mentioned "are fire," along with "you're welcome" with an upside-down smiley face. Grande reposted the video, adding, "HAHAHAHAHHAHAHAH IM SORRY U GOT THE WORST LINE. It was meant v lovingly.")

they heard it before it came out ? 🙂

As for Davidson? It seems that he also got a preview of his mention. (His lines, "Even almost got married / And for Pete, I'm so thankful," comes third in the stanza, ahead of "Wish I could say 'thank you' to Malcolm / 'Cause he was an angel," which addresses Grande's late ex Mac Miller, whom she dated from 2016 to 2018, and who passed away following an overdose this past September.) According to TMZ, Davidson heard "thank u, next" before appearing on SNL, prompting him to mention Grande, whom he called a "wonderful, strong person," after running the words by the show's creator and producer, Lorne Michaels. (TMZ reports that he also asked Michaels for permission to cut the skit about Grande that he'd planned for that night, after she appeared to respond to the show's promo by subtweeting him.)

Shortly after releasing "thank u, next," Grande also seemed to clear up that it wasn't a diss track, tweeting "no drags…. no shade….. jus love, gratitude, acceptance, honesty, forgiveness … and growth ?." As usual, though, it seems that she's been holding off from responding more officially until she feels like it. And, by the look of it, that could be a lot bit sooner than usual: She's set to appear on The Ellen DeGeneres Show in just 24 hours, on Wednesday.

Antoni Porowski had been dating Joey Krietemeyer for about seven years before he became an overnight celebrity thanks to Netflix's Queer Eye, and the show's designated food expert even said that the pair were "basically married." Though, in recent months Krietemeyer didn't appear with Poroski in public nor on his popular social media channels. Us Weekly now reports that the two broke up two months ago, but that they remain friends.