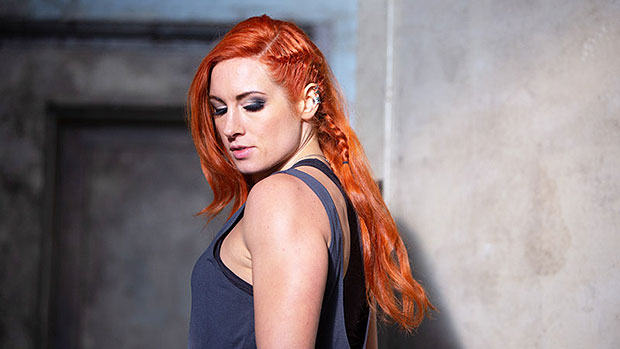 Some might be intimidated to act opposite The Miz and Shawn Michaels, but not Becky Lynch. WWE’s ‘The Man’ EXCLUSIVELY shares how she gets her ‘confidence’ and what a blast it was to work on ‘The Marine 6’

2018 has been the year of Becky Lynch. The WWE Superstar has not only skyrocketed in popularity inside the ring, but the woman born Rebecca Quin landed her first film role as “Maddy Hayes” in The Marine 6: Close Quarters. As the movie is now available on Blu-Ray and VOD, Becky EXCLUSIVELY talks with HollywoodLife.com about working alongside The Miz and Shawn Michaels, why WWE fans have taken to her recent character development, and what’s next for her.

HollywoodLife.com: You seem to be letting your evil side out a little bit, both in front of the camera and in the ring this year. How does it feel to play a different type of character?

Yeah, I think in the ring, it’s certainly, you see a lot of real frustration coming out, right? And I think that’s what’s resonating with people so much is that it’s real, you know? It’s that feeling of being overlooked, and of wanting to be more, and not holding anything back anymore, not trying to be liked, and going after what you truly want.

With the Maddy Hayes character, it’s going after what she feels is important. …I really, I loved playing that role, especially at the time. It was so different from what I was doing on TV, that it was a nice flip, to be able to go and play something completely different.

Working with The Miz, and HBK, what did you learn from that experience? Because the movie’s great, and everybody plays along with each other very well.

Watching how Miz navigated the film, how he conducted himself, and how he treated everybody really was just wonderful to see. He was such a great leader, really created this great atmosphere. Shawn is absolutely incredible. He was an incredible wrestler — obviously, one of the best of all time — and he’s just incredible at acting. I feel like there’s nothing he can’t do. And he was just so generous with his time and his advice. Both of them were. I loved every second of it.

What’s next, acting-wise? Would you like to do something like a Marvel movie, or a rom-com, or anything along those lines, for your next film?

Marvel sounds amazing, doesn’t it? Of course, yes, and comedy I feel like, is a genre I would probably take to pretty naturally. So, that’s something else I would like to delve into. But of course, like with a lot of action movies, there’s always that comedy element, which makes it so great.

That confidence? You know, the thing of it is, it’s always an inside job, right? It doesn’t come overnight. This is something that I’ve been working on for a long time, and why this works so well is because we’ve seen me not have confidence. We’ve seen me persevere. We’ve seen every obstacle being thrown my way and finding a way to deal with it.

But, it’s all about believing in yourself, and I always say, you know, you’re the only person that lives in your head. So, you can walk around telling yourself how great you are all day, walk around telling yourself how bad you are all day, like, it seems a lot better to live in a place where you’re saying you’re great, you know? So, I think you just gotta constantly work on believing in yourself, and believing that you’re enough. Have faith that you’ve got everything that it takes to make it. If you put the work in? Of course, you do.

With the great work that you’re doing, you’re proving other people correct — a lot of people, including Dusty Rhodes, whose last tweet was about you. How does that feel, knowing that so many people have the love for you and that you’re actually now proving what they believe about you?

That means the world to me. You know, I feel like I’ve been really lucky with my support system, with those people that have believed in me. I think it’s one thing that’s motivating is when people don’t believe in you and you prove them wrong.

The Marine 6 is out now on Blu-ray, DVD, and digital.

This interview has been edited.